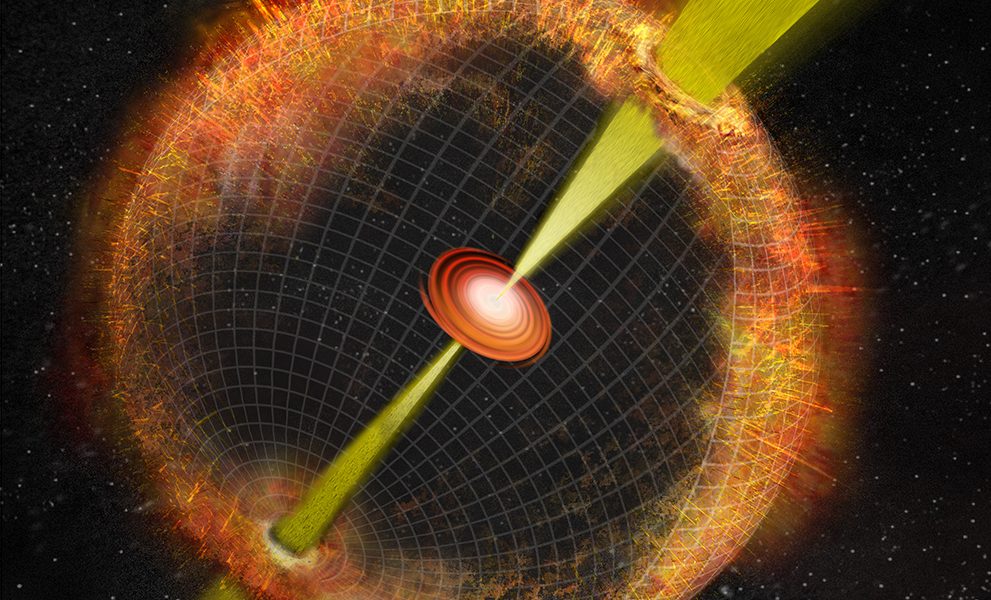 Astronomers comparing data from an ongoing major survey of the sky using the National Science Foundation’s Karl G. Jansky Very Large Array (VLA) to data from earlier surveys likely have made the first discovery of the afterglow of a powerful gamma ray burst that produced no gamma rays detectable at Earth. The unprecedented discovery of this “orphan” gamma ray burst (GRB) offers key clues to understanding the aftermath of these highly energetic events.

“GRBs emit their gamma rays in narrowly focused beams. In this case, we believe the beams were pointed away from Earth, so gamma ray telescopes did not see this event. What we found is the radio emission from the explosion’s aftermath, acting over time much as we expect for a GRB,” said Casey Law, of the University of California, Berkeley.

While searching through data from the first epoch of observing for the VLA Sky Survey (VLASS) in late 2017, the astronomers noted that an object that appeared in images from an earlier VLA survey in 1994 did not appear in the VLASS images. They then searched for additional data from the VLA and other radio telescopes. They found that observations of the object’s location in the sky dating back as far as 1975 had not detected it until it first appeared in a VLA image from 1993.

The object then appeared in several images made with the VLA and the Westerbork telescope in the Netherlands from 1993 through 2015. The object, dubbed FIRST J1419+3940, is in the outskirts of a galaxy more than 280 million light-years from Earth.

“This is a small galaxy with active star formation, similar to others in which we have seen the type of GRBs that result when a very massive star explodes,” Law said.

The strength of the radio emission from J1419+3940 and the fact that it slowly evolved over time support the idea that it is the afterglow of such a GRB, the scientists said. They suggested that the explosion and burst of gamma rays should have been seen sometime in 1992 or 1993.

However, after searching databases from gamma ray observatories, “We could find no convincing candidate for a detected GRB from this galaxy,” Law said.

While there are other possible explanations for the object’s behavior, the scientists said that a GRB is the most likely.

“This is exciting, and not just because it probably is the first ‘orphan’ GRB to be discovered. It also is the oldest well-localized GRB, and the long time period during which it has been observed means it can give us valuable new information about GRB afterglows,” Law said.

“Until now, we’ve never seen how the afterglows of GRBs behave at such late times,” noted Brian Metzger of Columbia University, co-author of the study. “If a neutron star is responsible for powering the GRB and is still active, this might give us an unprecedented opportunity to view this activity as the expanding ejecta from the supernova explosion finally becomes transparent.”

“I’m delighted to see this discovery, which I expect will be the first of many to come from the unique investment the National Radio Astronomy Observatory (NRAO) and the National Science Foundation are making in VLASS,” said NRAO Director Tony Beasley.

VLASS is the largest observing project in the history of the VLA. Begun in 2017, the survey will use 5,500 hours of observing time over seven years. The survey will make three complete scans of the sky visible from the VLA, roughly 80 percent of the sky. Initial images from the first round of observations now are available to astronomers.

VLASS follows two earlier sky surveys done with the VLA. The NRAO VLA Sky Survey (NVSS), like VLASS, was an all-sky survey done from 1993 to 1996, and the FIRST (Faint Images of the Radio Sky at Twenty centimeters) survey studied a smaller portion of the sky in more detail from 1993 to 2002. The astronomers discovered FIRST J1419+3940 by comparing a 1994 image from the FIRST survey to the VLASS 2017 data.

From 2001 to 2012, the VLA underwent a major upgrade, greatly increasing its sensitivity, or ability to image faint objects. The upgrade made possible a new, improved survey offering a rich scientific payoff. The earlier surveys have been cited more than 4,500 times in scientific papers, and scientists expect VLASS to be a valuable resource for research in the coming years.

Law and his colleagues are publishing their findings in the Astrophysical Journal Letters. 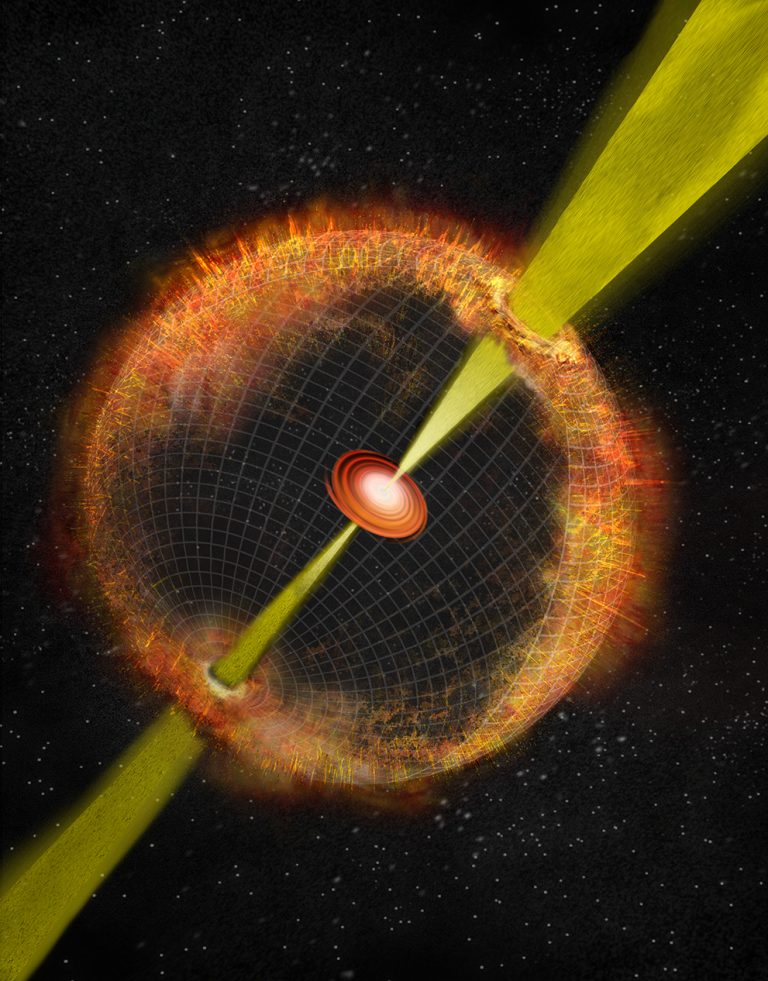 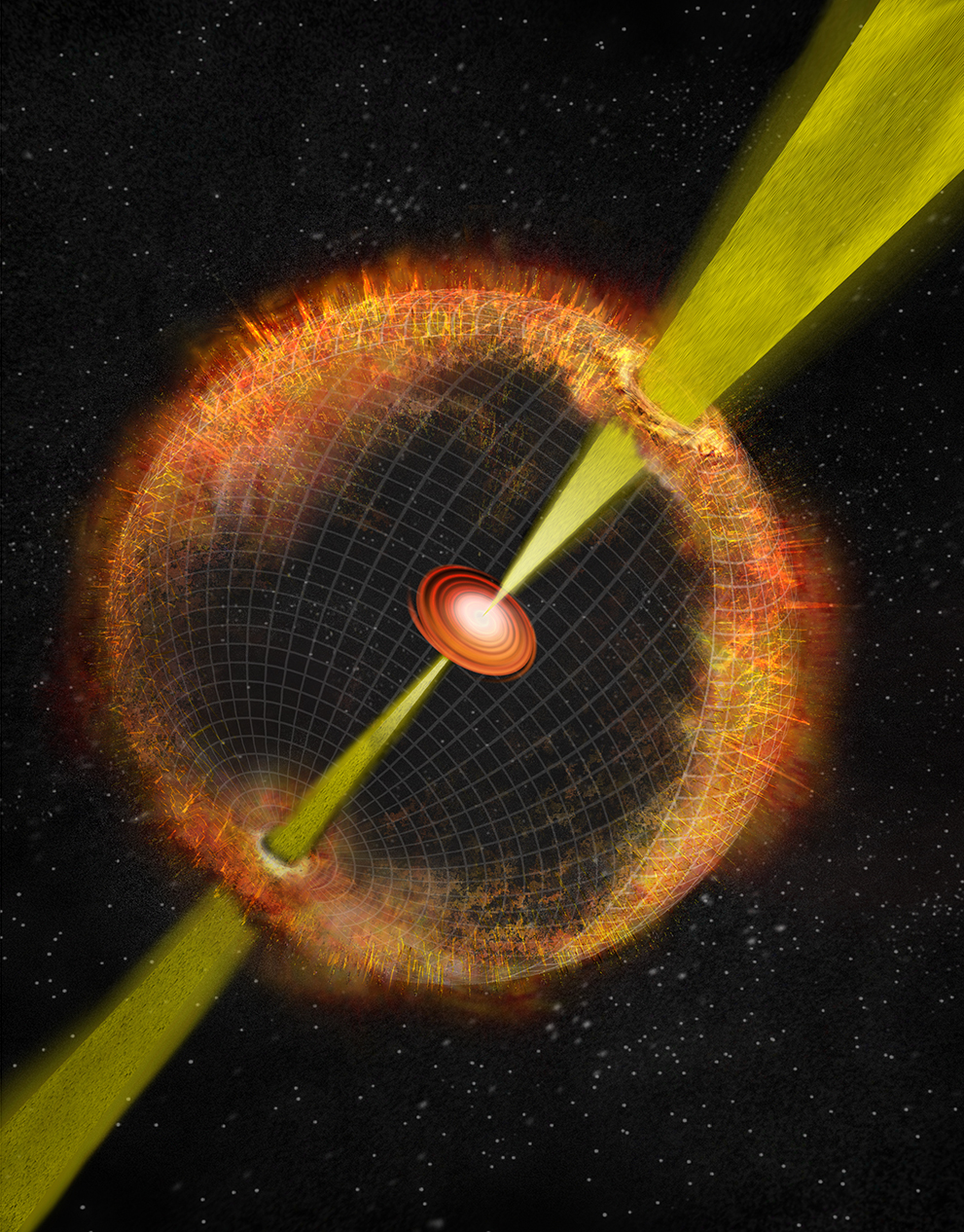