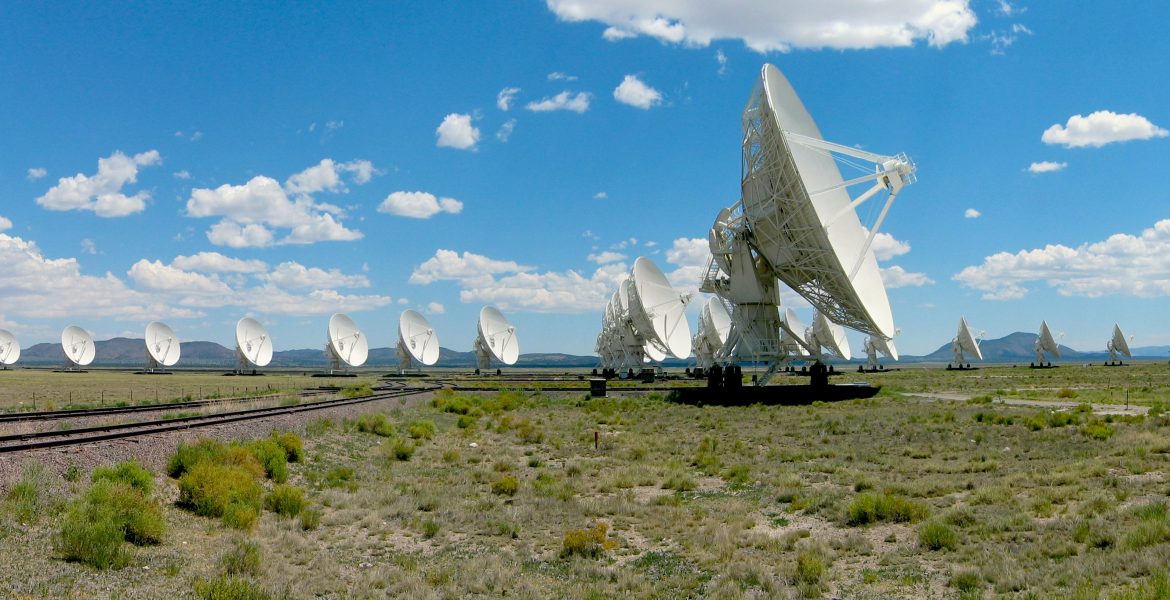 In the 1997 movie Contact, Ellie Arroway is a young radio astronomer played by Jodie Foster. Ellie’s on a mission to discover alien life, and in one famous scene filmed at the Very Large Array, she sits at the edge of the observatory, listening to the radio sounds of the sky with antenna dishes in the background. It’s a wonderful cinematic moment highlighting Ellie’s lonely search for truth and has become so iconic that many visitors to the VLA take “that shot” of themselves wearing headphones in front of a radio dish. But as beautifully poetic as the scene is, it is Hollywood magic, not hard science. The radio signals from Ellie’s headphones and computer would interfere with the observatory’s sensitive equipment and radio astronomers don’t listen to the sky.

Radio is a form of light. It’s just like visible light, but with a much longer wavelength. While visible light has a wavelength on the scale of atoms, radio light has wavelengths ranging from about the thickness of a pencil lead to more than the length of a bus.

Because radio wavelengths are on the human scale, the technology of radio astronomy is often very different from that of optical astronomy. There are broad similarities. Both optical and radio astronomy use reflective surfaces to focus light onto a detector or receiver, which then converts the light into a digital signal. Astronomers can then use this digital signal to create astronomical images. But because radio wavelengths are so much longer than visible wavelengths, we have to achieve this feat in different ways.

One key factor is the size of the reflector. Generally, the larger your reflector or mirror, the more light you can focus and the sharper and brighter your image. This is why the best optical telescopes have mirrors several meters in diameter. But the size of your reflector must scale to that of your wavelength. Since radio waves are thousands of times longer than visible waves, a radio telescope mirror would need to be larger than Manhattan. That isn’t something we can build, so instead, we create arrays of smaller dishes. Each antenna dish acts like a piece of a larger mirror. Astronomers can then simulate a city-wide dish by combining data from the array of smaller dishes.

Of course, once astronomers have their data, they can always convert that data into sound. This is most famously done with pulsars, where the electric bursts of energy from a neutron star are converted to audible pops. Astronomers have also converted phenomena such as the turbulent aurora of Jupiter, or the wail of a distant nebula. These sounds can give us an emotional connection to the cosmos, but just like the scene from Contact, they are merely a poetic interpretation of the radio light we capture.