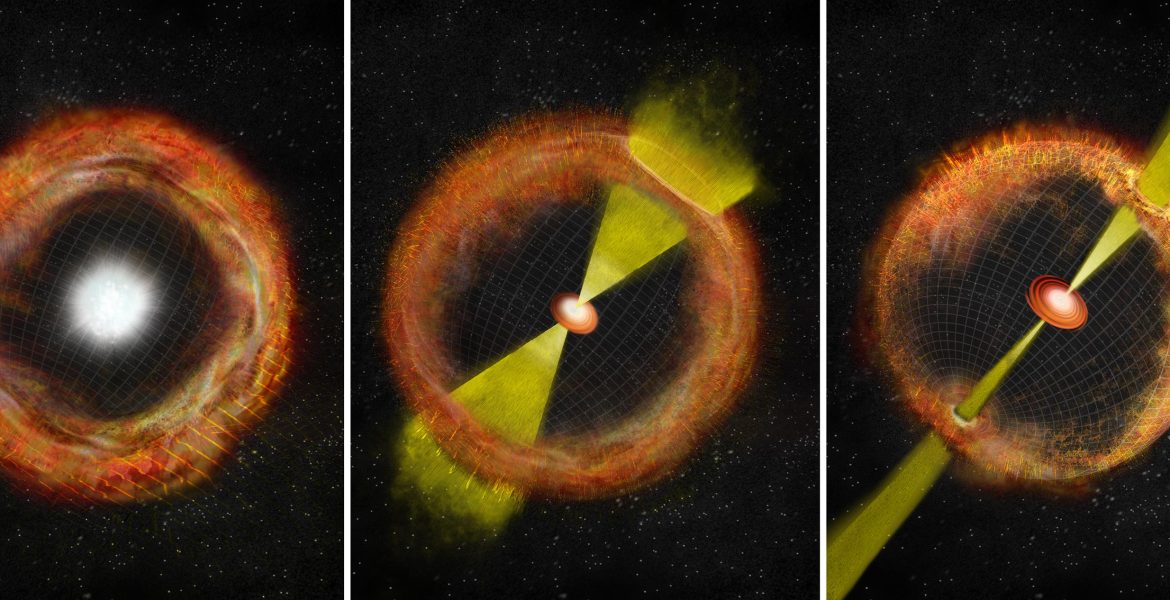 Astronomers using the National Science Foundation’s Very Large Array (VLA) have found a long-sought “missing link” between supernova explosions that generate gamma-ray bursts (GRBs) and those that don’t. The scientists found that a stellar explosion seen in 2012 has many characteristics expected of one that generates a powerful burst of gamma rays, yet no such burst occurred.

“This is a striking result that provides a key insight about the mechanism underlying these explosions,” said Sayan Chakraborti, of the Harvard-Smithsonian Center for Astrophysics (CfA). “This object fills in a gap between GRBs and other supernovae of this type, showing us that a wide range of activity is possible in such blasts,” he added.

The object, called Supernova 2012ap (SN 2012ap) is what astronomers term a core-collapse supernova. This type of blast occurs when the nuclear fusion reactions at the core of a very massive star no longer can provide the energy needed to hold up the core against the weight of the outer parts of the star. The core then collapses catastrophically into a superdense neutron star or a black hole. The rest of the star’s material is blasted into space in a supernova explosion.

The most common type of such a supernova blasts the star’s material outward in a nearly-spherical bubble that expands rapidly, but at speeds far less than that of light. These explosions produce no burst of gamma rays.

In a small percentage of cases, the infalling material is drawn into a short-lived swirling disk surrounding the new neutron star or black hole. This accretion disk generates jets of material that move outward from the disk’s poles at speeds approaching that of light. This combination of a swirling disk and its jets is called an “engine,” and this type of explosion produces gamma-ray bursts.

The new research shows, however, that not all “engine-driven” supernova explosions produce gamma-ray bursts.

“This supernova had jets moving at nearly the speed of light, and those jets were quickly slowed down, just like the jets we see in gamma-ray bursts,” said Alicia Soderberg, also of CfA.

An earlier supernova seen in 2009 also had fast jets, but its jets expanded freely, without experiencing the slowdown characteristic of those that generate gamma-ray bursts. The free expansion of the 2009 object, the scientists said, is more like what is seen in supernova explosions with no engine, and probably indicates that its jet contained a large percentage of heavy particles, as opposed to the lighter particles in gamma-ray-burst jets. The heavy particles more easily make their way through the material surrounding the star.

“What we see is that there is a wide diversity in the engines in this type of supernova explosion,” Chakraborti said. “Those with strong engines and lighter particles produce gamma-ray bursts, and those with weaker engines and heavier particles don’t,” he added.

“This object shows that the nature of the engine plays a central role in determining the characteristics of this type of supernova explosion,” Soderberg said.

Chakraborti and Soderberg worked with an international team of scientists from five continents. In addition to the VLA, they also used data from the Giant Meterwave Radio Telescope (GMRT) in India and the InterPlanetary Network (IPN) of spacecraft equipped with GRB detectors. The team, led by Chakraborti, is reporting their work in a paper accepted to the Astrophysical Journal. Other articles, led by co-authors Raffaella Margutti and Dan Milisavljevic, also report on the X-ray and optical follow-up on SN 2012ap using a suite of space and ground-based facilities.