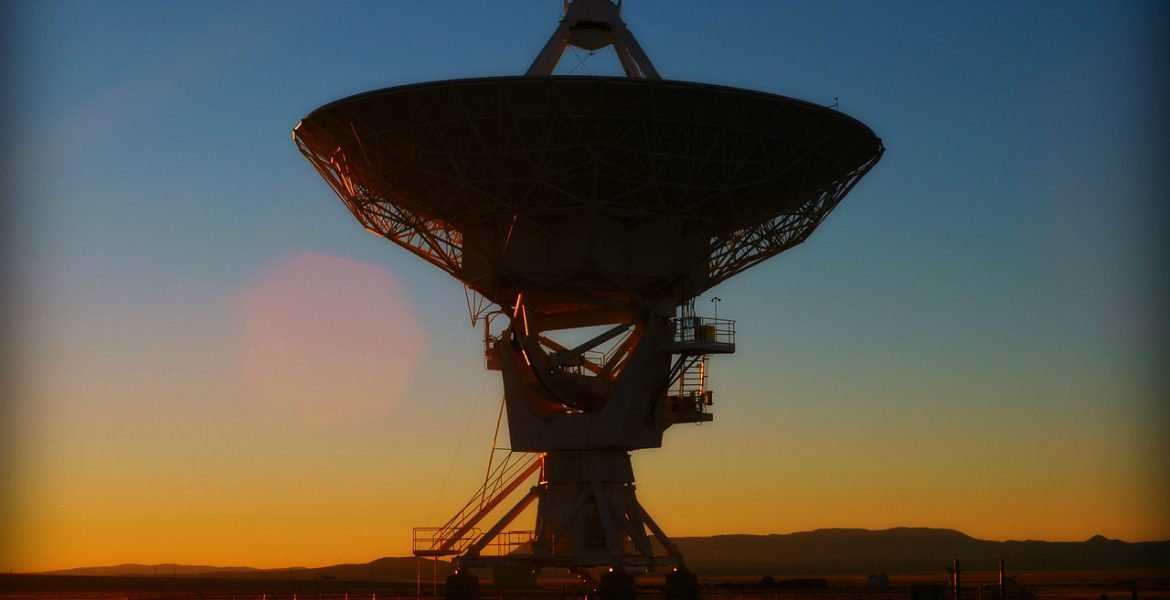 Astronomical images are often filled with beautiful and subtle colors. While some images are fairly accurate to the colors we see with our eyes, most are false-color images designed to make certain features more apparent. This is always the case with light our eyes can’t see, such as radio. While we could talk about the colors of radio light, we don’t. For practical and historical reasons, we often talk about radio in terms of bands.

The color of light is defined by the frequencyFrequencyA measure of wave vibrations per unit time. Typically measured in hertz, or cycles per second. In radio astronomy, high frequency corresponds to shorter wavelengths, like submillimeter waves detected by ALMA. Lower frequency refer to longer waves, like centimeter waves detected by the VLA. or wavelengthWavelengthThe distance between two adjacent crests of a wave. of its waves. For visible light, red has a lower frequency (and longer wavelength), while blue has a higher frequency (and shorter wavelength). So, we could say that each frequency has a unique color. If we extend this to other types of light such as radio or X-ray, then all light has color.

Of course, our eyes can’t see radio or X-ray light. We can’t even see every color of visible light. Instead, our retinas have three types of color-sensitive cells called cones. Each type of cone is sensitive to a narrow range of colors, either reddish, greenish, or bluish. Our brain then interprets the light of these cones as a full-color image.

In astronomy, we could say that each type of cone captures a band of optical frequencies. Thus, our eyes have red-band, green-band, and blue-band sensors. The color bands of optical astronomy don’t quite match those of our eyes, since they depend on the sensitivity of optical cameras. The most common optical bands are R (red), V (visible), and B (blue), but astronomers also use I (infrared) and U (ultraviolet).

Because radio wavelengths are so much longer than visible ones, the color bands we use for radio are often defined differently. Rather than defining them in terms of the sensitivity of a detector, they are defined in terms of the size of the waveguide used to detect them. A waveguide is basically a hollow tube or channel that can carry a radio wave to the detector. The size of the waveguide depends on the wavelength of the radio light, where longer wavelengths require larger waveguides.

These waveguide bands date back to the development of radar in World War II, so their names have no real rhyme or reason. That was by design so that if a radar operator happened to mention X-band, K-band, or Q-band, the enemy would have a hard time figuring out the radar’s frequency. Over time other bands were added as well.

Waveguide bands are still often used. The Karl G. Jansky Very Large Array (VLA) uses waveguide bands, and is so sensitive that it uses three slightly different frequencies in the K-band. But other radio observatories define their own bands based on the sensitivity of their telescopes. For example, the Atacama Large Millimeter/submillimeter Array (ALMA) can observe wavelengths from 8.6 mm to 0.32 mm and divides this range into 10 bands.

Although we call them bands, that doesn’t mean that a radio telescope can capture all the light equally within a particular band. For any detector, there is a particular frequency where it is most sensitive. For wavelengths that differ slightly from that optimal frequency, the detector is less sensitive. The same is true for the way our eyes see color. The red cones in our retinas are most sensitive to red, but they can detect a little bit of green light. The same is true for the other cones in our eyes.

Seeing colors allows us to distinguish certain features around us, such as seeing a bright red apple among the green leaves of the apple tree. The same is true for radio astronomy. By using different frequency bands, astronomers can distinguish the cold microwave glow of dust and gas from the hot radio glow of electrons swirling in a magnetic field. Many of the different colors of radio light are produced by different processes. By observing these colors radio astronomers can understand how everything, from stars to black holes, behaves.

But that’s a story for another time.