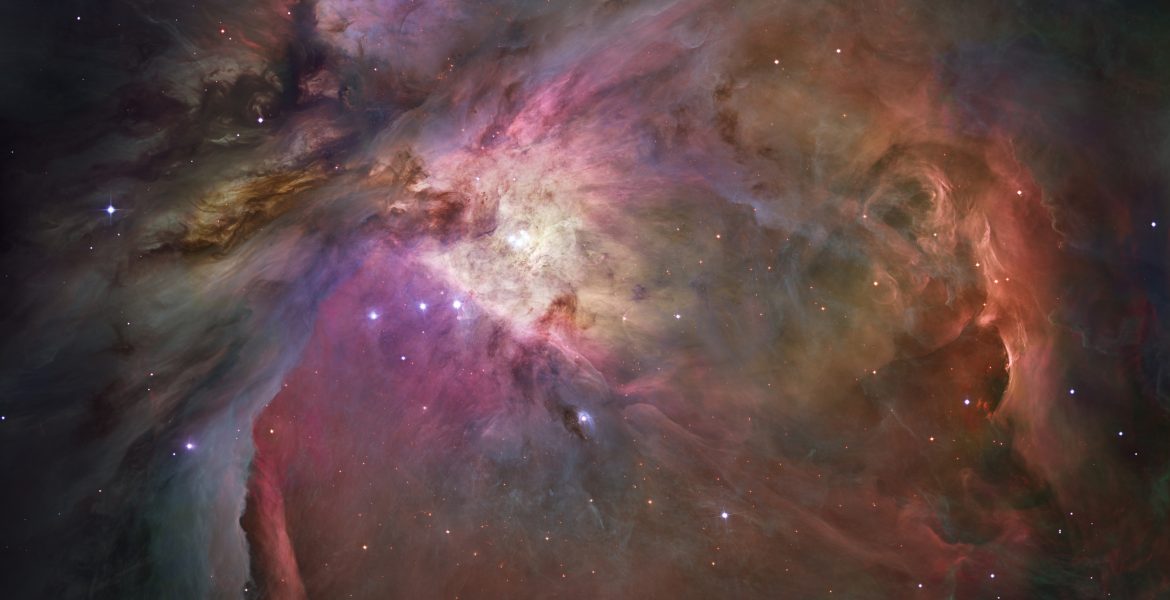 Half a century ago, using a National Radio Astronomy Observatory (NRAO) 36-foot telescope in Tuscon, Arizona, three astronomers, R. W. Wilson, K. B. Jefferts, and A. A. Penzias made the first discovery of carbon monoxide (CO) in space. It was a small result, just the observation of a bright radio signal from within the Orion Nebula. The paper announcing the discovery is two pages long. But sometimes a small discovery can change the way we see the universe.

Astronomers can only see atoms and molecules in space by studying their light. The light they absorb and the light they emit. It can be difficult to observe this light because most of the gas in the universe is cold and dark. The first atom to be seen in space was hydrogen, which emits a faint radio light with a wavelength of 21 centimeters. This light could be seen because hydrogen is by far the most abundant element in the universe. Carbon monoxide is much rarer, but the light it emits is bright and distinct. And CO gas tends to be found in cold, dense, interstellar clouds. Its discovery let astronomers study these clouds in a new way.

One of the first surprises was that cold gas clouds are very common in the Milky Way. Before the radio observation of CO, the clouds could only be seen in visible light, and only where they blocked or reflected the light of nearby bright stars. Most were invisible to optical telescopes. With radio telescopes, astronomers could see clouds of gas and dust throughout our galaxy. As radio astronomers discovered more types of molecules in space, they began to understand the complex chemistry that occurs in these interstellar clouds.

Cold carbon monoxide gas emits a clear and distinct radio signal, so it can be used as a good measure of the density and motion of interstellar clouds. This is particularly useful in the study of planet-forming regions within these clouds. The Atacama Large Millimeter/submillimeter Array (ALMA)Atacama Large Millimeter/submillimeter Array (ALMA)Funded by the U.S. National Science Foundation and its international partners (NRAO/ESO/NAOJ), ALMA is among the most complex and powerful astronomical observatories on Earth or in space. The telescope is an array of 66 high-precision dish antennas in northern Chile. has observed the light from CO gas to identify clumps within the planet-forming disks around young stars. The clumps indicate where new planets might be forming.

One of the challenges in optical astronomy is that dusty regions can absorb and scatter much of the optical light emitted by stars. It’s similar to the way fog might hide your view of distant city lights. This is particularly true in the region near the center of our galaxy, and it makes it difficult for astronomers to study the far side of the Milky Way. But the radio light emitted by carbon monoxide penetrates through this region very well. Because of this, radio astronomers have been able to identify gas clouds throughout our galaxy, even within distant spiral arms. This allows astronomers to study the structure of the Milky Way, and how it differs from other spiral galaxies.

The CO molecule was detected because NRAO’s 36-foot telescope was capable of observing short radio wavelengths of only a few millimeters. Millimeter-wavelength radio astronomy continues be on the cutting edge of radio technology. Through it, dark regions of the universe have become bright beacons of understanding.