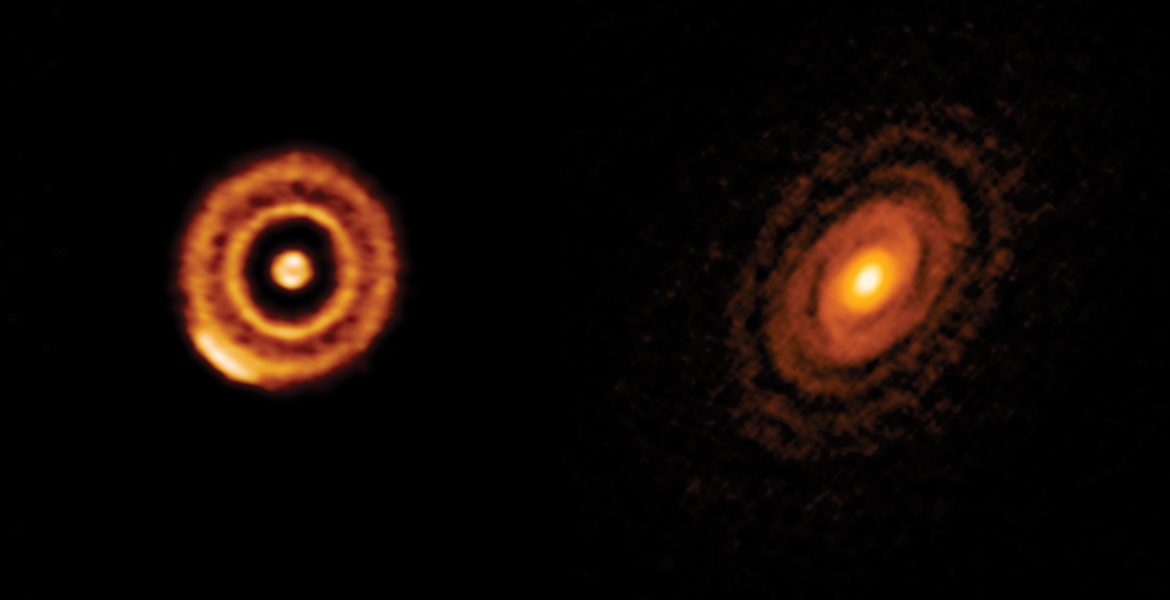 Astronomers have discovered more than 5,000 planets orbiting other stars. We now know that most stars have orbiting planets and we have a good idea of how they form. Within star-forming regions, most young stars have a disk of gas and dust around them known as a protoplanetary diskProtoplanetary DiskThe swirling disk of dust and gas that collapsed from a much larger cloud of material that will eventually evolve into a fully fledged planetary system. Features in the disk may already herald the presence of young planets.. Astronomers have observed early planets forming within these disks. But astronomers are still not sure how protoplanetary disks form and evolve 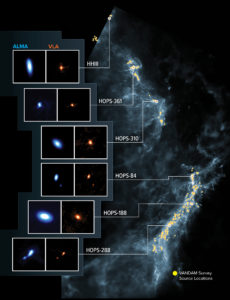 This image shows the Orion Molecular Clouds, the target of the VANDAM survey. Yellow dots are the locations of the observed protostars on a blue background image made by Herschel. Side panels show six young protostars imaged by ALMA (blue) and the VLA (orange).
Credit: NRAO/AUI/NSF 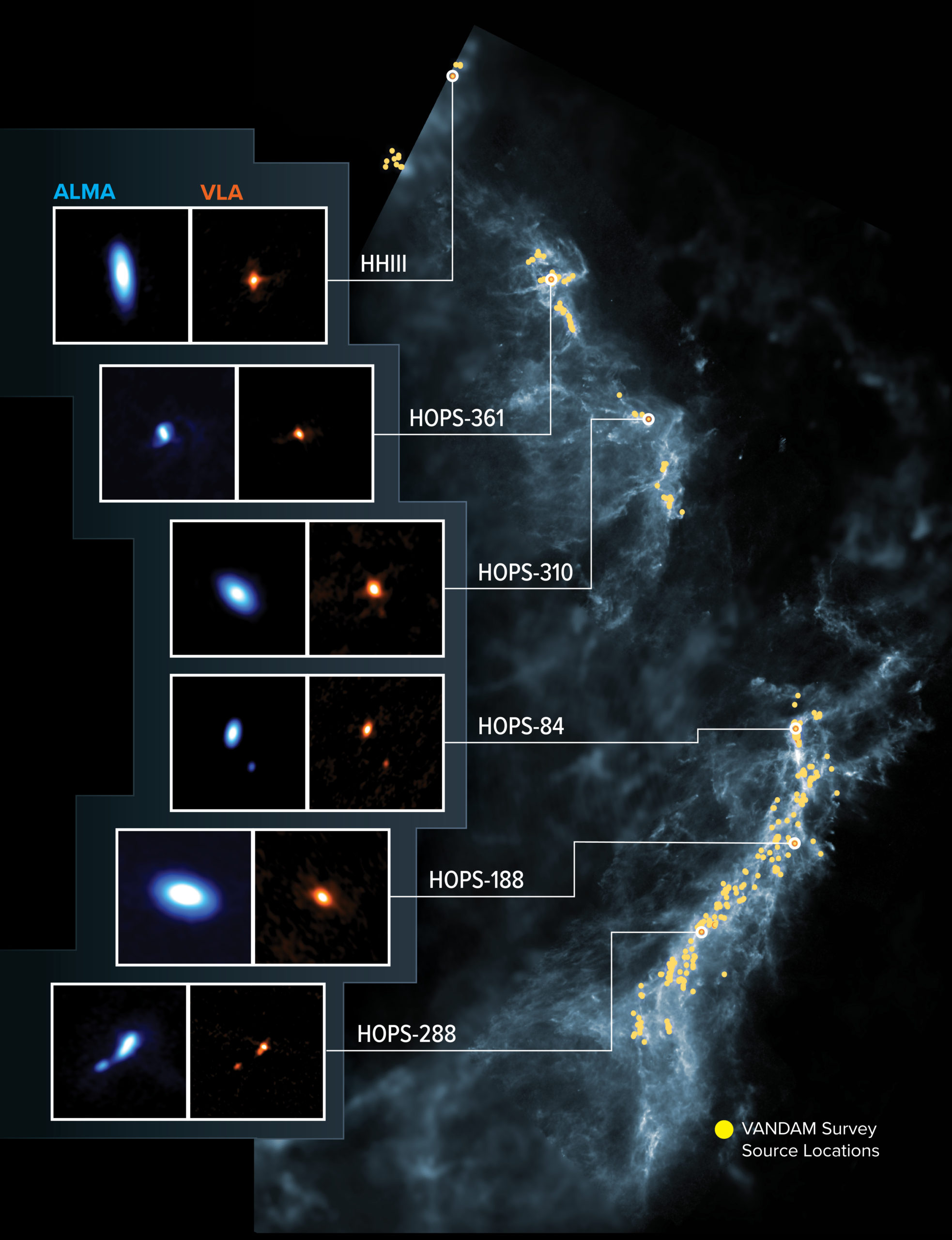 This image shows the Orion Molecular Clouds, the target of the VANDAM survey. Yellow dots are the locations of the observed protostars on a blue background image made by Herschel. Side panels show six young protostars imaged by ALMA (blue) and the VLA (orange).
Credit: NRAO/AUI/NSF

Studying the earliest period of planetary formation is difficult. Young stars are surrounded by a dense halo of dust that can hide them from view, and by the time the dust clears a protoplanetary disk has already formed. To understand this process better, astronomers using the Very Large Array (VLA) and the Atacama Large Millimeter/submillimeter Array (ALMA) have undertaken a radio survey of young stars in the constellation of Orion, which is home to the closest star-forming regions to Earth. This new survey is known as the VLA/ALMA Nascent Disk and Multiplicity (VANDAM) survey, and it is the largest survey of young stars ever made.

Although the dust surrounding young stars blocks most visible light, it is more transparent to radio light. Because of this, the radio Credit:  observations of the VLA and ALMA allowed astronomers to have a detailed view of young star systems. With the VANDAM survey, the team measured the size and mass of many young protoplanetary disks and compared them to older disks ALMA has already studied. One of the things they found was that younger disks are generally more massive than older disks of the same size. This makes sense since as a star forms it captures more nearby material, which reduces the mass of its surrounding disk. But it also implies that the largest worlds of a planetary system start to form early on when the protoplanetary disk is more dense.

Older protoplanetary disks typically have rings within them where there is significantly less material. These gaps within the disk are often regions where planets are forming, but they could also indicate a resonant structure within the disk, where the gravitational tug of young planets causes gaps to form, similar to the way Jupiter creates orbital gaps in the asteroid belt. VANDAM observations have found similar gap structures within disks as young as 100,000 years, which is surprisingly early. Within the first million years of a system, the structure of a disk is similar to that of older disks. A few of the systems seen in the VANDAM survey were very irregular in shape. It’s possible that these systems are so young that a disk system hasn’t begun to form. It could also be the case that even the protostar hasn’t fully taken shape.

Working together, the VLA and ALMA are giving us a better understanding of the complex dance of gravity and matter around young stars, and how that dance leads to the formation of planets like our own.