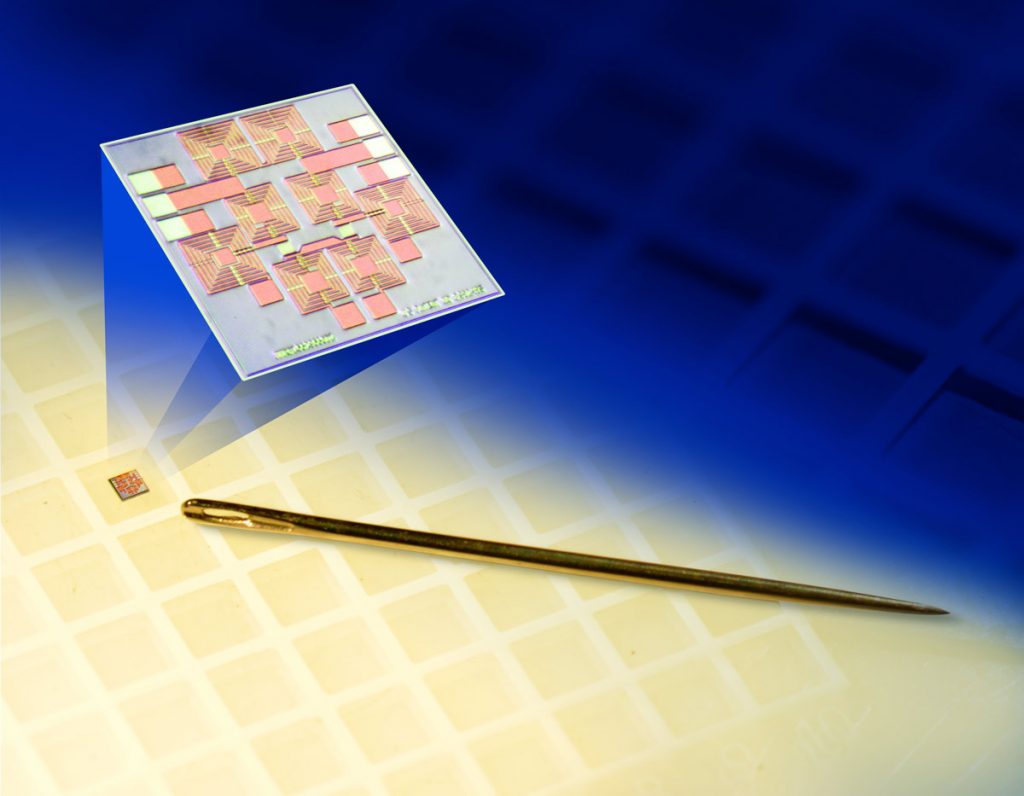 Electronic filters are among the most common building blocks used in all kinds of electronic systems – from the phone in your pocket to the satellites in space. What they do is easy to understand: they block some frequency channels while allowing others to pass. This could be used to isolate a particular station on the radio or to keep out unwanted noise and interference.

Picture it this way. The airwaves are literally filled with broadcast transmissions – from radio stations, satellites, cell phones, wifi hotspots, key fob readers, garage door openers, and countless other sources. Add to that the accidental emissions from things like microwave ovens, electric motors, and even our power grid. All of these signals are in the air and trying to get into your electronic parts. One of the first things any bit of wireless electronics must do, then, is to single out the one frequency channel, or the one piece of information out of all the others, that it is looking for. This is what filters do.

Or, alternatively, consider that even non-wireless electronics do a lot of signal manipulation as a normal part of operating. Your DVD or Blu-Ray player has to read and then transmit the information stored on the optical disk to your television through a high-speed cable. The cable itself, and the connectors on it, may introduce slight amounts of distortion that would tend to corrupt the information it is carrying. A filter could be used to smooth out or “clean up” this distortion before it gets turned into images on your screen.

These functions are critical. Modern society could not exist without them, and it is our filters that make it possible.
But filters have a flaw. In most filters, the manner in which unwanted frequencies are blocked is by reflection. The energy carried by these signals doesn’t go away, it simply bounces back to the source (or to the last component in the signal path that passed it, say an amplifier or a mixer). Usually not suited to process the reversed input, these peripheral components simply push the intruding signal back out again, possibly amplified. The cycle repeats, and the problem grows until something balances the equation – usually nonlinearity. Just like the filters in your water pipes – a little bit of sand can be dealt with, but too much and the whole system clogs.

It is exactly this kind of issue that I was struggling with almost 10 years ago. One of my prototypes was misbehaving, and I had traced the problem down to unwanted noise becoming trapped between a filter and an amplifier. Both parts were needed, they just weren’t getting along. I wasn’t the first engineer to experience this. The usual fix is to put “absorber” between the two components, to dissipate trapped energy before it grows unchecked. Unfortunately, absorber is indiscriminate, it will attenuate the desired frequencies as well. This is the compromise my colleague, Rick Fisher, was suggesting when he lamented, “It always seems a shame to throw away gain to stabilize out of band.”

A little online research taught me that others had asked the same question before me over the years, but none had found a solution that performed well enough that I wanted to use it. In fact, I learned much later, that what I was looking for were once called constant-resistance networks by pioneers in our field decades ago. Unfortunately, their solutions, based on time-honored circuit-synthesis techniques, ran into serious roadblocks that kept them out of the mainstream today. It is a good thing I didn’t know about this work at the time, for I would quickly have become intimidated by the highly technical approach, and by the weighty list of names that had applied themselves to it before I had – names like Bode, Zobel, Foster, and Brune – and I would surely have abandoned the attempt before it began.

Ignorant of my ignorance, I started to attack the problem in my own unorthodox way (a nifty bit of lateral thinking, if the reader will forgive the conceit, that I will present in some detail in part 2). A month later, I had my solution: a clever arrangement of elements (inductors, capacitors, and resistors) that would, in principle, allow frequencies in a certain band to pass totally unimpeded, while others would be absorbed, with no reflection – that is, no reflection whatsoever, from either port. Absolutely none, mathematically zero. I was stunned. Such perfect, wideband cancellation of reflections is almost unheard of in our field, even in theory, and it seemed a violation of certain theoretical limits called the Bode-Fano Criteria (it’s actually not a violation, for technical reasons I won’t get into here, but it still goes against the instincts we are trained as microwave engineers to accept).

In reality, of course, all circuit elements have minor imperfections, so I would never realize this ideal in practice, but this did nothing to take away from the sense of astonishment that I felt at the elegant solution I now had laid out before me. For once, perfect performance was a goal that we could approach without fundamental limitations. This is the way filters were meant to be, I decided, and I dubbed them reflectionless to highlight this important and unexpected feature.

At the encouragement of my colleagues at the CDL, we applied for a patent on the novel design I had come up with. Five years later, I had another breakthrough that broadened the scope of my invention, and then another six months after that. Born out of the needs of radio astronomy instrumentation, these new filters were way too useful to keep to ourselves. We sought out an industry partner, and eventually licensed our patent to Mini-Circuits, who now has more than 50 models available for commercial purchase, with most of their customers coming from the military and test and measurement sectors.

Inspired by where out-of-the-box thinking can take you, I have continued to make improvements (in my typically unusual way). I realized about two years ago that the area of inquiry I had started was becoming too big to summarize in the usual format (academic journal papers) and decided to write a comprehensive textbook on the subject [1]. That exercise alone led me to new ways of looking at the problem and was ultimately responsible for the latest discovery. Finally, I could apply labels like “Chebyshev” to the filters, which I can now make while having zero reflection at all frequencies.

If nothing else, I hope that this account of my experience inspires other engineers to follow their inspirations. It is crucial that we learn from those who came before us – but it is just as crucial that we question what assumptions they may have made, even without them realizing it. One never knows what they’ll find under a rock that nobody else thought to turn over.