Different scenarios for the aftermath of the collision of two neutron stars. At left (in the short gamma-ray burst [SGRB] scenario), a jet of material moving at nearly the speed of light is propelled from the collision site into a sphere of material initially blown out by the resulting explosion. If viewed from an angle away (off-axis) from the center of the jet, the long-term emission of X-rays and radio waves would be getting weaker. At right, the jet cannot punch out of the shell of explosion debris, but instead sweeps up material into a broad "cocoon," which absorbs the jet's energy and emits X-rays and radio waves over a wider angle. In this case, such emission is still growing in intensity, as now observed with both radio and X-ray telescopes.

On 17th August 2017, the Advanced LIGO and Advanced Virgo observatories detected gravitational waves from the merger of two neutron stars. Extremely dense and neutron-rich material, equal to 10,000 times the mass of the Earth, was ejected during the merger process, sending intense shocks into the environment. The Karl G. Jansky Very Large Array (VLA), with the JAGWAR program led by Dr. Kunal Mooley, was the first to discover radio waves from these shocks.

In October 2017, when LIGO announced the gravitational wave detection, about 80 research papers were submitted, reporting observations with different telescopes across the globe. Many of the papers reporting radio observations claimed that there is a jet that we are viewing obliquely. A jet consists of material restricted to a very narrow cone and moving very fast – close to the speed of light. In order to get more insight, we continued to observe it with the VLA. These observations were unique because, at that time, optical telescopes like the Hubble Space Telescope and X-ray telescopes like the Chandra Space Observatory could not observe due to proximity to the Sun. We found that the intensity of radio emission was steadily rising, unlike that expected for a simple jet. We think that the jet has interacted with the surrounding neutron-rich material that was released during the merger process. And this interaction produced a bubble-like structure called a cocoon.

Whether the jet has successfully punched through the neutron-rich material, or got completely choked by it, we will understand through polarization and VLBI observations. Polarization is a specialized measurement by which we can understand the direction in which the light waves are vibrating. If the jet punched through, then it should have a stronger polarization signal. Very Long Baseline Interferometry, or VLBI is the technique of combining data simultaneously from telescopes separated by thousands of miles. VLBI observations are currently underway and will allow us to get an extremely high-resolution photograph of the site of the merger and thus help discern whether there was a jet.

The question of whether the jet punched through is important to understand in the connection between neutron star mergers and astrophysical phenomena called short duration gamma-ray bursts (or short GRBs). Now, short GRBs are intense flashes of gamma-ray radiation lasting for less than 2 seconds. If the successful jet is confirmed, then after years of circumstantial evidence, we now have direct proof that short GRBs are generated by neutron star mergers. On the other hand, if the jet was completely choked then it points to diversity of outcomes of neutron star mergers. Some mergers launch jets while others fail. In the latter case, the rate of short GRBs is less then the neutron star merger rate. Choked jets drive strong cocoons or wide-angle outflows, and this bodes well for the future detection of electromagnetic counterparts of gravitational wave sources. 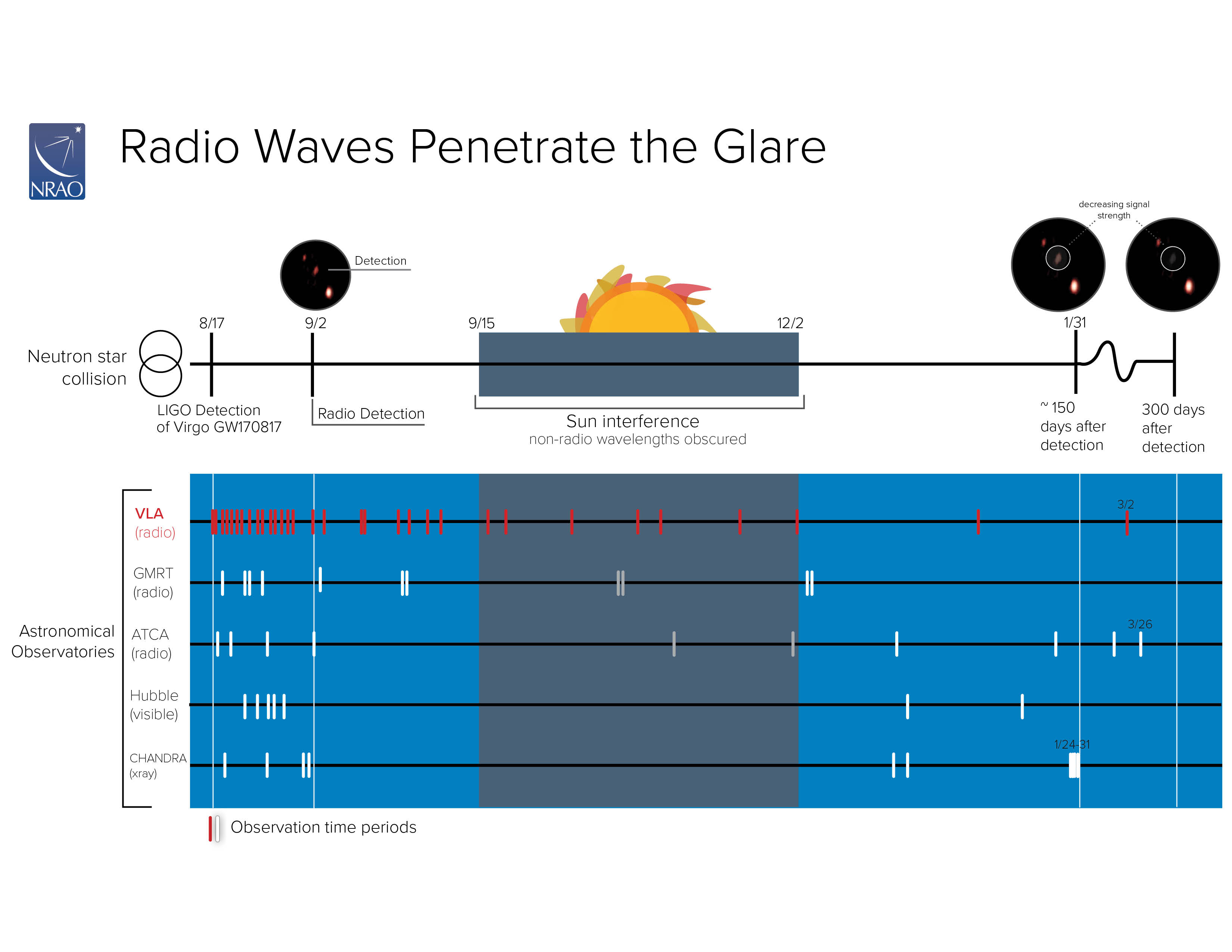