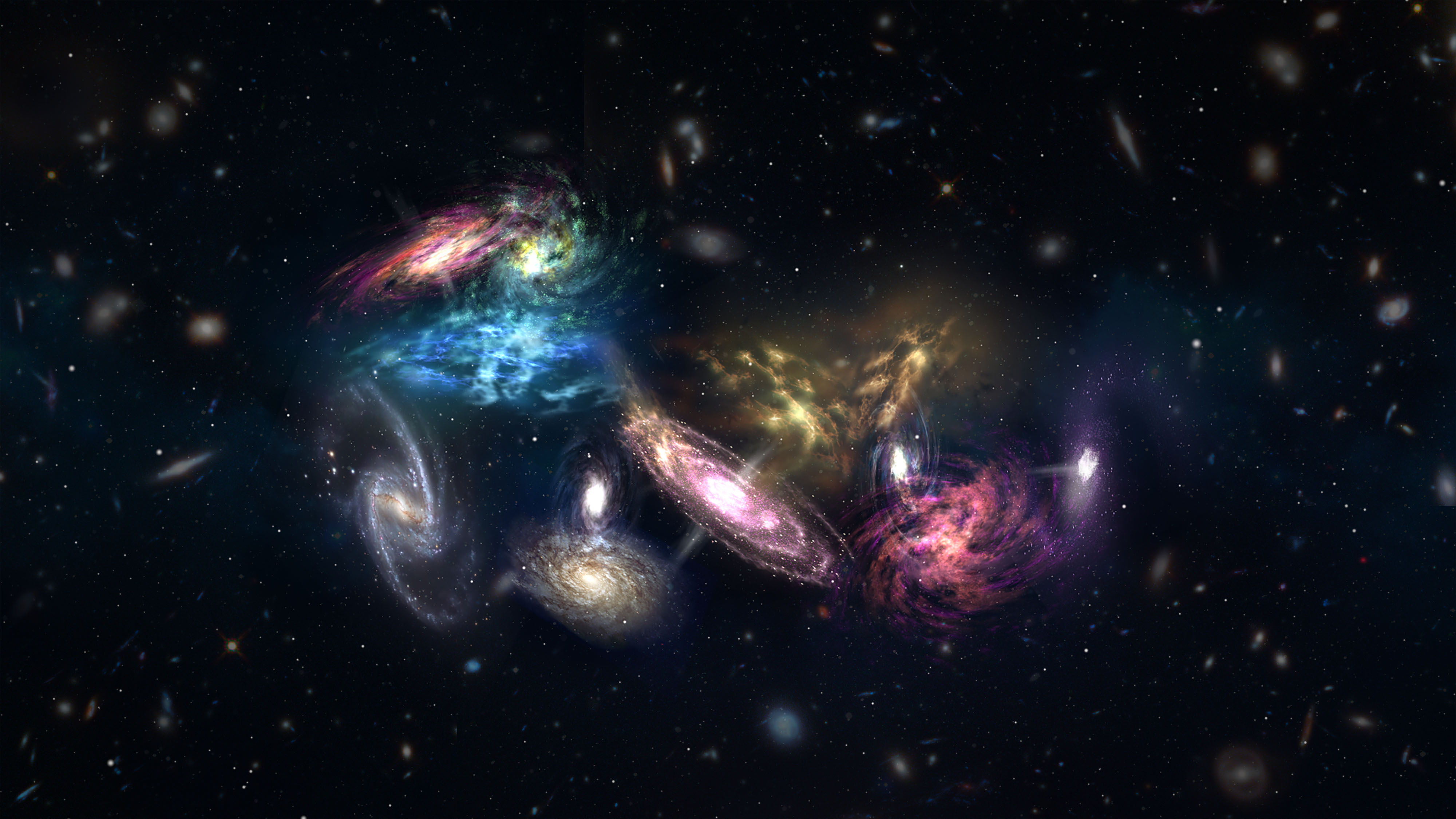 Artist impression of the 14 galaxies detected by ALMA as they appear in the very early, very distant universe. These galaxies are in the process of merging and will eventually form the core of a massive galaxy cluster.

A century ago two prominent astronomers held a debate at the Smithsonian Museum of Natural History. The topic concerned the nature of the faint spiral nebulae seen in the night sky—are they galaxies that each contain billions of stars like our own Milky Way, or are they found within the Milky Way itself? The answer to this question would have profound implications for the size of our universe. We now know that these nebulae are indeed separate galaxies, but we still don’t fully understand how they form and evolve. It is a question the Next Generation Very Large Array (ngVLA) will help us understand. The ngVLA will study galaxy evolution by comparing how the fuel available for making stars matches up with the rate at which they are formed throughout the history of the cosmos.

Stars are born in stellar nurseries swaddled in enormous clouds of gas. The coldest, densest clouds of gas collapse under gravity, until enough material is pulled together in one spot to form a star, or multiple stars, in several parts of the cloud. But nature provides challenges to star formation. For example, powerful jets can shoot out during the process of star formation and push back on the collapsing gas clouds against gravity. Furthermore, baby stars themselves emit hot radiation that can act to evaporate the surrounding gas. Understanding the fine-tuned balance between these different competing phenomena in galaxies is a major goal of the ngVLA, primarily by looking at the cold gas itself rather than the end product of the whole process. This will be important for scientists to evaluate if their models of the star formation process correctly describe what happens in reality inside our cosmic neighbors, and in the universe beyond.

Tracing the cold gas content of galaxies throughout cosmic history is key to understanding how the stars and planetary systems we find in galaxies today were originally made, and thus, how galaxy evolution takes place. This evolution began only a few hundred million years after the Big Bang (i.e., more than 13 billion years ago) when galaxies first formed. In a single day of observations, the ngVLA will find tens to hundreds of galaxies in the early Universe based on the emission from the star-forming gas within them, while at the same time mapping the distribution and motion of the gas down to the size scales of individual star-forming clouds. Enabled by broad support in the US and from the worldwide astronomical community, these studies will transform our understanding of galaxy formation and evolution across cosmic history in the coming decade.