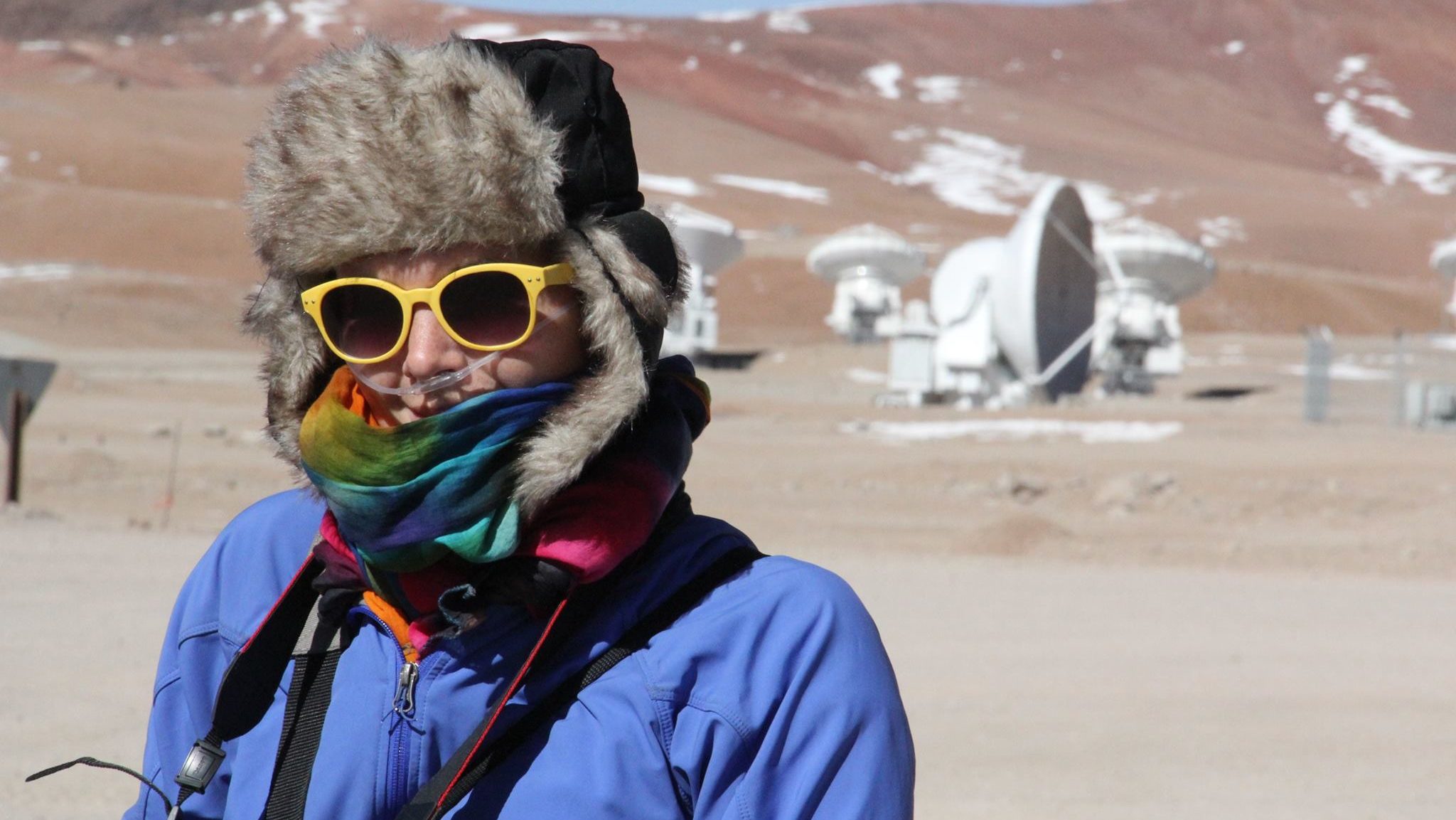 Standing at the high site of the Atacama Large Millimeter/submillimeter Array is like standing on another world. Sandy gravel marks the rolling plain beneath an oddly blue sky. The air is thin and dry, with such little oxygen you have to wear an oxygen tank. Across the plain, brilliant white antenna dishes dot the landscape. They are nestled in a plateau surrounded by mountains. It looks more like the fictional desert planet of Dune than our own homeworld.

At 16,500 feet, ALMA is the highest radio telescope on the planet. The location of ALMA was chosen by the necessities of astrophysics and the happenstance of terrestrial geography. The primary mission of ALMA is to observe the cold and distant gas and dust of the cosmos. The kind of material that floats in interstellar space and huddles around young stars as they begin to form planetary systems. This gas and dust emits a faint light with wavelengths about a millimeter long. These wavelengths of radio and microwave light are absorbed by water vapor in Earth’s atmosphere, so they can only be seen from space, or at high elevations where the air is thin and dry.

While optical telescopes such as the Hubble can be launched into space, radio telescopes cannot. The resolution of a telescope depends on the wavelengths of light it observes. The wavelengths of radio light are thousands of times longer than those of optical light, so to have a resolution similar to an optical telescope, the antennas of a radio telescope have to be spread across an area thousands of times larger than an optical telescope. So ALMA could only be built on a mountain plateau. The highest and driest plateau on Earth is in the Atacama region of northern Chile. Known as Chajnantor plateau, it is the perfect location for this kind of radio astronomy, with clear skies and a reasonably flat area large enough for more than five dozen radio antennas.

Maintaining and operating the observatory is a huge challenge. Winter storms can pummel the region, and high winds can shut down operations at times. The environment is so harsh that workers must pass strict medical exams to work on site. The site is closed to the general public. Anyone can visit the low site at 10,000 ft, where the residences and control center are located, but the antennas operate at the high site, and only visitors with special approval are allowed. Even then, you have to pass a basic health test. Not everyone passes. On my first visit to I did not.

In 2015, I was part of an astronomy outreach group visiting observatories across Chile. ALMA was the last stop on our tour. It was a chance to visit one of the most remote observatories in the world if you can pass the physical. The key things they measure are blood pressure, heart rate, and oxygen level. With an increase in altitude the amount of oxygen in the air drops. At the high site, oxygen levels are half that sea level. As a result, your body goes into stress mode, raising your heart rate and blood pressure as it works harder to keep you conscious. In the most extreme scenarios, this can lead to things like a stroke or heart attack. So, if the medical examiner thinks your body is too stressed, you aren’t approved. Period. I wasn’t approved, but everyone else in my group was. I had to wait at the low site as they went to the high site. They said it was amazing. I wouldn’t know. I was the boy they left behind.

Earlier this summer I had the chance to visit ALMA again. It was not without trepidation that I arrived at low site for another medical check. As I sat there connected to the devices, I wondered if I would be denied again. Some people never pass the test. It has less to do with your age or whether you run every weekend, and more with the whims of your biology. Some people don’t react well to high elevations. Others have less of an issue with it.

But this time I passed. I was given my necessary papers and an oxygen tank to be worn for the entire trip up and back. After the 30-minute drive to the high site you are checked again, mostly to confirm that your oxygen level is satisfactory. After that, you can spend about an hour among the antenna dishes of ALMA.

It is only when you step outside of the buildings at the high site that you realize just how far away you are from your native land. The sky is brilliant blue, but somehow wrong. It is both brighter and darker than you expect it to be. It casts an odd layer of color upon the grey and red rocks of the land. The mountains on the horizon seem both close and distant in a way that is difficult to explain. Even with your oxygen tank, the air seems faint and cold. It is a wondrous site of desolation, dotted with some of the most sophisticated radio dishes in the world. A view few in the world will ever see.

And if you listen very closely, you might hear a small voice in the back of your head: