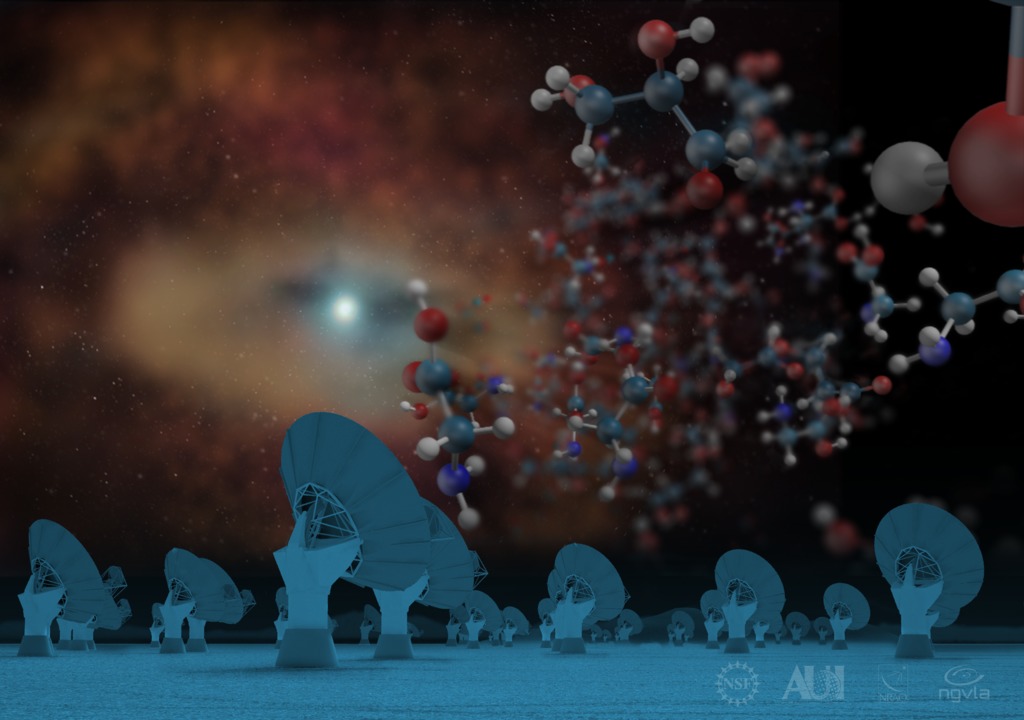 Molecules are found in the hard vacuum of interstellar space, in the same places where new stars and planetary systems form. How complex can these molecules get?

Astronomers have found that rich organic chemistry (the chemistry of molecules made of carbon atoms) is happening in space, and molecules related to life processes are found in the same places where future solar systems are forming. Depending on how, when, and where the planets in these solar systems form, these molecules will affect their composition. Given the right conditions, complex molecules may seed primitive worlds with the building blocks of life. Radio observations of chemistry provide a unique way to study the formation of planets themselves, as their composition depends on the region where they formed in the proto-solar nebula—gas clouds that formed the Sun and the planets—and these regions are in turn home to unique chemical species.

Radio telescopes, like the next generation Very Large Array, are especially good at finding large organic molecules in space because these molecules emit light in the form of a pattern composed of a unique fingerprint. Indeed, observations of star-forming regions with radio telescopes have recently found the simplest type of sugar as well as molecules that are the precursors of amino acids, the building blocks of proteins.

Radio telescopes have also detected the first molecules with handedness (chirality), which refers to two versions of a molecule that are mirror images of each other. Interestingly, the two versions (of a molecule) with handedness are chemically identical but not interchangeable, just like our hands where a right-hand glove cannot fit the left-hand glove. Chiral molecules are widespread in biological systems, which for unknown reasons prefer one-handedness over the other: living organisms on Earth exclusively use left-handed amino acids and right-handed sugars. There are even some medications that are much more effective in the left-handed chemical configuration than in their right-handed one. In a twist of dexterity, some artificial sweeteners exploit the fact that despite being a sugar and tasting sweet they pass through our organism without being metabolized because they have the wrong handedness!

A hypothesis for this preference for a particular mirror image is that it was already present in gas clouds that formed the Sun and the planets that formed the Solar System, and organisms on Earth just evolved to use the form that was more commonly available. Finding more molecules that are related to biological systems would help us understand how life evolved on Earth, and perhaps how common it is in the universe.

When looking for complex molecules in star-forming regions, even the largest and most powerful of the existing radio telescopes, however, face fundamental limits. But, the ngVLA is designed to overcome these limits, through a combination of its ability to observe a large range of frequencies, its capacity to zoom into very small regions, and its power to detect extremely faint signals thanks to its very large collecting area (utilizing 263 antennas over a vast geographic area). We expect that after several years of operation of the ngVLA we will have detected a range of new complex interstellar and proto-planetary molecules, which will help us understand much better the origins of planetary systems, and life itself.

Other molecules act as signposts of the kind of conditions that exist in planet-forming systems. Planets form in disks of gas and dust orbiting a very young star. These disks have a temperature structure, with their warmer regions being closer to the central star. Abundant molecules that “freeze” at particular temperatures create so-called “snow lines” in the disks and planets that form inside or outside these snow lines have markedly different characteristics and compositions. The thermal structure of these disks and their history can also be studied by observing deuterated molecules, where the normal version of a hydrogen atom is replaced by a form of heavy hydrogen called deuterium. These deuterated molecules form preferentially at low temperatures, and their abundance serves as a record of the local temperature. The ngVLA has the sensitivity and resolution to measure the distribution of ammonia in planet-forming disks, an important marker of the water snow line, and it is also capable of detecting and measuring the distribution of several deuterated species.

For more information on chirality, watch “What is Chirality and How Did it Get in my Molecules?”