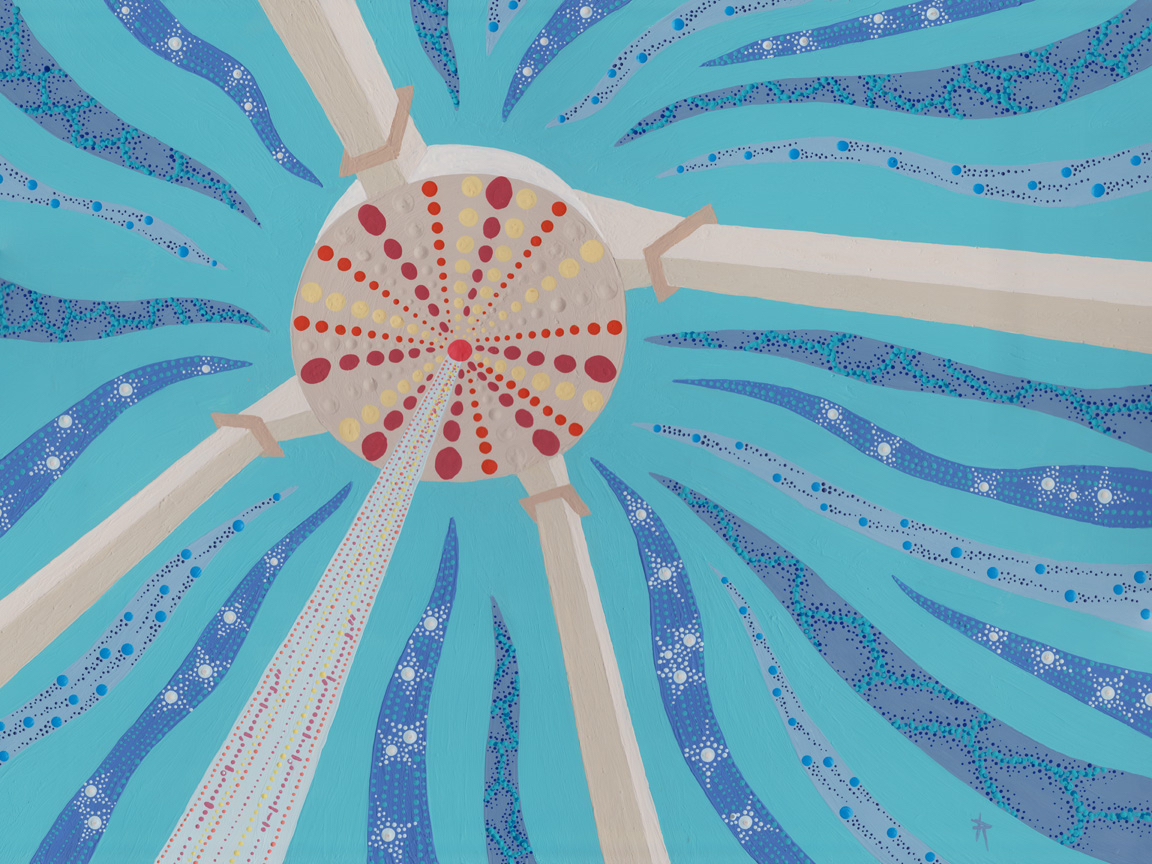 In June 2017, we invited scientists and astronomers from around the world to discuss development plans and design ideas for the next phase of the Very Large Array in New Mexico.  This collaboratively inspired design will take the best engineering concepts in radio telescopes and build an interferometric array with a much greater collecting area and spatial resolution — ten times greater than the current specifications of the VLA. This next generation telescope will be optimized for observations at wavelengths between the submillimeter wavelengths of ALMA and the centimeter wavelengths of the future SKA-1, maximizing the capabilities of each radio telescope in the most efficient way.

In an effort to connect the public with the science of radio astronomy, we invited four artists to join our four workgroups: The Cradle of Life; Galaxy Ecosystems; Galaxy Assembly through Cosmic Time; and Time Domain, Cosmology and Physics.  Each artist was given the task of illustrating a science case in order to visually tell the story of what a next-generation Very Large Array will offer. Here’s what one artist had to say:

I had the great pleasure of being invited to join a ngVLA design conference (which I like to refer to the XLA – for eXtremely Large Array). During my walking tour of the array, I took over 500 photographs of everything I could think to point a camera at. When else would I get such an amazing opportunity?

The conference was divided into four science working cases and each artist selected a case study. I chose Time Domain, Cosmology and Physics, because the subject matter seemed to best fit my artistic style, which can be loosely classified as indigenous abstract – I studied drawing and painting with aboriginal artists from Australia.  At one point in the conference, we were presented with an image of a galaxy that looked to me like a topographical map, and it immediately inspired me to think of layers of dots depicting the different regions of the electromagnetic spectrum. Later, on a walking tour around the VLA, I got to climb into a 25-meter antenna dish. Looking up at the receiver, another image popped into my mind in which I make the connection between the science and public perception of that science. The image that I had envisioned — and attempted to render using acrylic paint with varying layers of colors — reminded me of swirling streams of information and radio waves emanating from the sky. To show the different channels of data representing the different radio frequency facets of our universe, I took a rather different perspective. Can you see it?

The big puzzle resides in the fine “print.” In the above image, there is a message to decode — can you find it?  I hope you enjoy my attempt to make the unseeable into something inspirational. It was a great experience to paint alongside all of these astronomers and scientists.