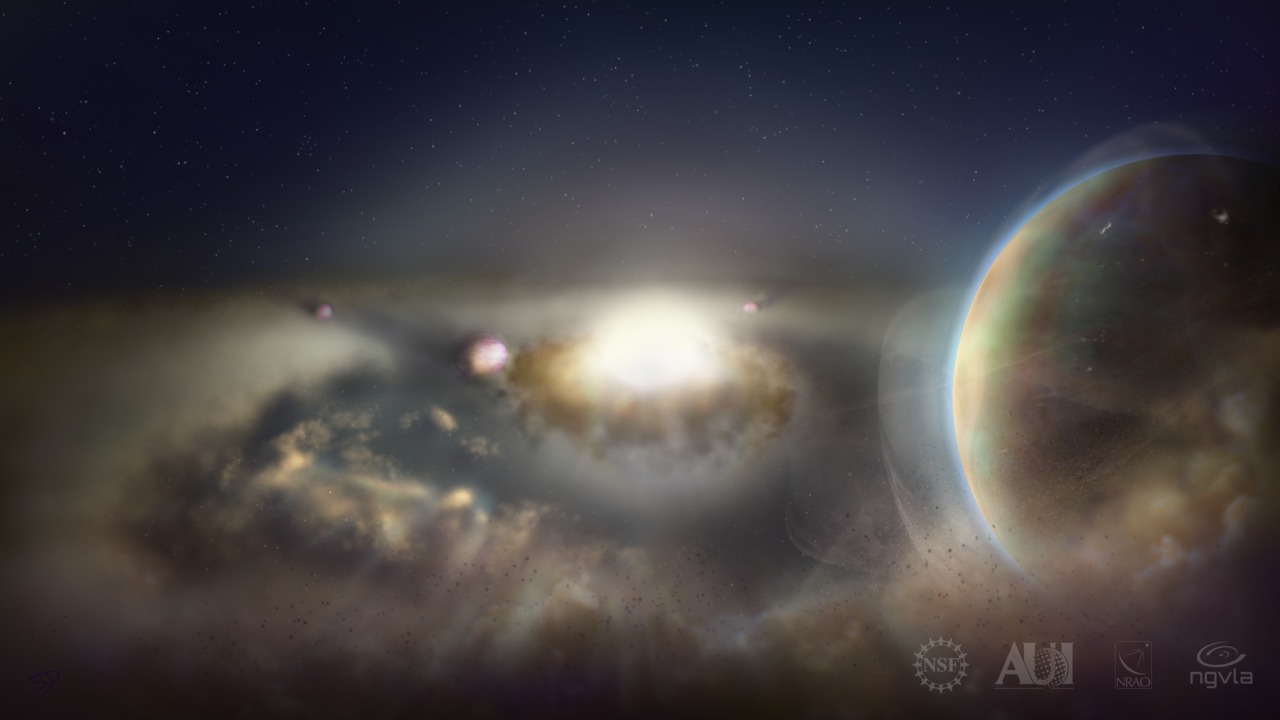 Astronomy is all about our origin: where do we come from? What is the origin of the Earth and the Solar System? Are we alone in the Universe? How did life start on Earth, and if it started here, what are the possibilities of life on planets outside of our Solar System, the so-called exoplanets? These questions and more are being addressed by planet formation researchers, and the next-generation Very Large Array (ngVLA) telescope will provide a transformative leap in the search for these answers.

With the discovery of thousands of exoplanets (planets around other stars) in the last two decades, the mysteries surrounding the formation of our Solar System have been transformed into a much more complex question:

In order to find these answers, we need to go back to the beginning and investigate the formation of planets. Unfortunately, we cannot use a time machine to travel back and witness how our Solar System was first formed. Instead, to study the birth of planets we look to younger versions of our Solar System that are surrounded by proto-planetary disks, in which the planets are born. These stars are true babies in astronomy terms: we are looking for stars that are only a few million years of age, whereas our Sun is more than four billion years old!

Proto-planetary disks can be envisioned as large pancakes of gas and dust with a hole in the center: that’s where the star is located. The disks rotate slowly around the star, and the dust grains are thought to bind together over millions of years growing into larger and larger sizes until a rocky planet is formed. Gas may be accumulated onto this rocky planet as well — in that case, the planet becomes a gas giant, much like Jupiter. Although astronomers can simulate this planet-building process in complex computational models, many parameters in these models are still unknown. When exactly does the planet formation process start? How quickly do dust grains grow? How much material is available? Does planet formation happen in the same way everywhere, or does it depend on the properties of the star? And how do the constituents of the disk affect the composition of the planet and its atmosphere?

Until about ten years ago, we had very little idea of what a proto-planetary disk looked like. It was possible to measure the presence of the material surrounding it like dust grains and gas, but no images of disks could be taken. The primary reason for this difficulty is that young stars with disks are located in large dusty clouds that are hundreds of light-years away from Earth. Although disks are typically a few times larger than the size of our Solar System, their distance from us prevents astronomers from observing them in detail (their size in the sky is at most one arc second or 1/3600th of a degree—one arc second is equivalent to the apparent size of a penny seen at a distance of 4 km (2.5 miles). Secondly, most of the disk material is cold and emits light primarily in the infrared and (sub) millimeter wavelengths, which cannot be measured with telescopes like the Hubble Space Telescope. In order to get detailed images of disks, we have to use interferometers, or arrays of radio antennas spread out over a large area and connected electronically. This kind of telescope array makes it possible to zoom in on the disks and reveal what is happening inside of them.

Pioneering radio telescopes such as the Submillimeter Array in Hawai’i were the first to show a glimpse of gaps carved out by planets. But the real revolution started with the Atacama Large Millimeter/submillimeter Array (ALMA) in 2011 in Chile, which produced the most incredible images of proto-planetary disks: from gaps and rings to asymmetries in the dust, to spiral arms and movements of the gas. Most of the disks observed with ALMA have shown signatures of one or more planets in systems that were only a few million years old. Furthermore, ALMA made it possible to measure the mass budget of disks: how much gas and dust is present at an early age, and how many planets can be built from it. What chemical components are present that determine the planet’s capability of building life?

However, all these discoveries led to new questions–and mysteries–surrounding the planet formation process. Astronomers realized that light emitted in millimeter wavelengths has a distinct disadvantage: part of the proto-planetary disk remains opaque (just like fog, you cannot see all the way through it). This means that ALMA observations can only trace the upper layers of the disk, specifically in the inner part close to the star. This region holds particular interest in comparisons with exoplanets and the Solar System, because most planets (including Earth and Jupiter) are located close to their star as well! However, due to the high opaqueness it is impossible to see whether planets in this region carve gaps in the disk. Also, ALMA images lack the level of detail needed to detect gaps created by planets at an orbit like that of Earth or Mars. On the other hand, the gaps that are seen in ALMA images hint at planets with very wide orbits at tens or even hundreds of times the distance between the Earth and the Sun. However, exoplanets are hardly ever found with such large orbits, as exoplanet searches are most sensitive to planets close to the star. This leads to a big challenge: ALMA can only detect signatures of planets at large distances from their central star, but exoplanets are mostly found at close orbits, and so astronomers are left with many unanswered questions about exoplanet observations.

The next generation Very Large Array (ngVLA) will solve many of these problems. The ngVLA will be able to take images at wavelengths that are five to ten times sharper than that of ALMA. The ngVLA will be able to resolve the gaps carved by planets at the orbital radius of Earth, because it observes at longer wavelengths where the emission is no longer opaque! By looking all the way through the disk, astronomers will be able to properly measure the mass of each disk and better gauge what planets can form in each disk. We may even be able to detect the very first steps in the growth of a newly forming planet!

The ngVLA will enable a new exotic field of planet formation research. Theoretical models have predicted the existence of winds and jets that must originate very close to the star in order for the system to remain stable. These stellar winds consist of very hot, ionized gas, which radiate only in centimeter and decimeter wavelengths. Current radio telescopes cannot see details and do not have the imaging capability to map these winds and study their properties, so the ngVLA will be the first to take images of features like these and compare them with theoretical models. These discoveries will help astronomers understand how disks evolve with time and how they eventually disappear, leaving just the planets behind.

Finally, the ngVLA will be able to detect many more molecules in disks, particularly complex organic molecules. These types of molecules form the building blocks of biochemistry and the origins of life. Measurements of these molecules will help astronomers determine how, when and where these building blocks could originate  on a planet like ours and how the seeds of life might be discovered elsewhere.

Altogether, the ngVLA is expected to revolutionize our understanding of planet formation and build on the far-reaching successes of ALMA.