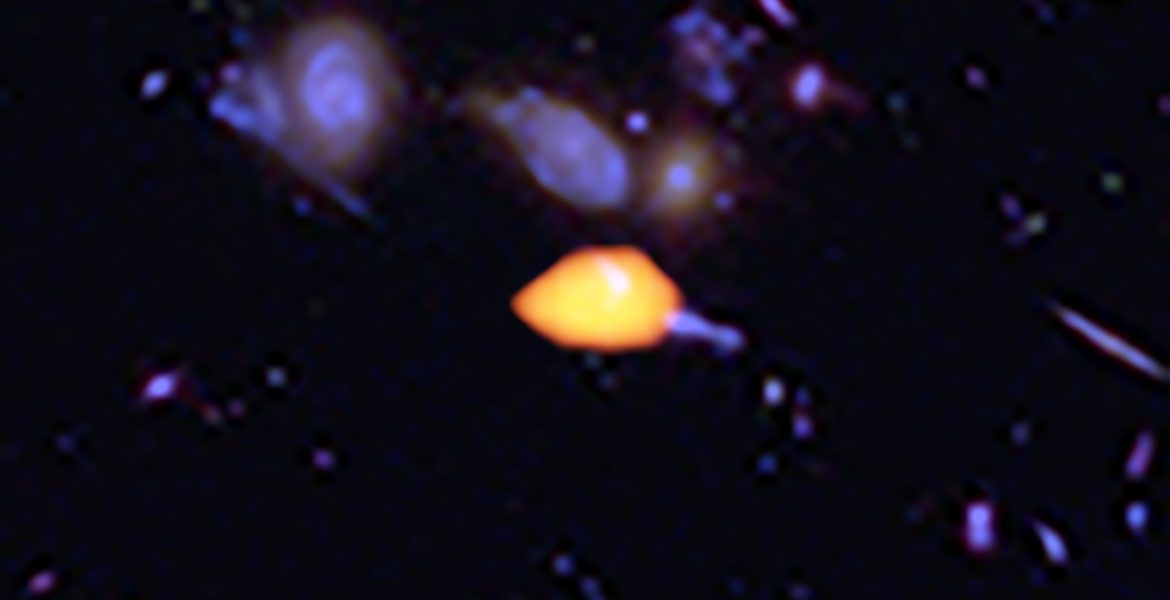 An international team of astronomers using the Atacama Large Millimeter/submillimeter Array (ALMA) has explored the same distant corner of the universe first revealed in the iconic image of the Hubble Ultra Deep Field (HUDF).

The new ALMA observations, which are significantly deeper and sharper than previous surveys at millimeter wavelengths, trace the abundance of star-forming gas at different points in time, providing new insights into the “Golden Age” of galaxy formation approximately 10 billion years ago.

The researchers presented their findings today at the Half a Decade of ALMA conference in Palm Springs, California. The results also are accepted for publication in a series of seven scientific papers appearing in the Astrophysical Journal.

Just like the pioneering deep-field observations with the NASA/ESA Hubble Space Telescope, scientists using ALMA surveyed a seemingly unremarkable section of the cosmos in a so-called “blind search.” This type of observation probes a specific region of space to see what can be discovered serendipitously rather than homing in on a predetermined target, like an individual galaxy or star-forming nebula.

“We conducted the first fully blind, three-dimensional search for cool gas in the early universe,” said Chris Carilli, an astronomer with the National Radio Astronomy Observatory (NRAO) in Socorro, New Mexico, and member of the research team. “Through this, we discovered a population of galaxies that is not clearly evident in any other deep surveys of the sky.”

Unlike Hubble, which studies visible and infrared light from bright cosmic objects like stars and galaxies, ALMA studies the faint millimeter-wavelength light emitted by cold gas and dust, the raw material of star formation. ALMA’s ability to see a completely different portion of the electromagnetic spectrum allows astronomers to study a different class of astronomical objects, such as massive star-forming clouds and protoplanetary disks, as well as objects that are too faint to observe in visible light.

The new ALMA observations were specifically tailored to detect galaxies that are rich in carbon monoxide (CO), a tracer molecule that identifies regions rich in molecular gas and primed for star formation. Even though these molecular gas reservoirs give rise to star formation in galaxies, they are invisible to Hubble. ALMA can therefore reveal the “missing half” of the galaxy formation and evolution process.

“These newly detected carbon-monoxide rich galaxies represent a substantial contribution to the star-formation history of the universe,” said Roberto Decarli, an astronomer with the Max Planck Institute for Astronomy (MPIA) in Heidelberg, Germany, and member of the research team. “With ALMA we have opened a pathway for studying the early formation and assembly of galaxies in the Hubble Ultra Deep Field.”

The new ALMA observations of the HUDF include two distinct, yet complementary types of data: continuum observations, which reveal dust emission and star formation, and a spectral line survey, which looks at the cold molecular gas fueling star formation. The line survey is particularly valuable because it includes information about the degree to which light from distant objects has been redshifted by the expansion of the universe. Greater redshift means that an object is further away and seen farther back in time.

With the most recent observations, astronomers were able to create a three-dimensional map of star-forming gas as it evolves over cosmic time, from the present to about two billion years after the Big Bang.

“The new ALMA results confirm a rapidly rising gas content in galaxies with increasing look-back time,” said Manuel Aravena, an astronomer with the Diego Portales University in Santiago, Chile, and member of the research team. “This increasing gas content is likely the root cause for the remarkable increase in star formation rates during the peak epoch of galaxy formation, some 10 billion years ago.”

Astronomers specifically selected the area of study in the HUDF, a region of space in the constellation Fornax, so ground-based telescopes in the Southern Hemisphere, like ALMA, could probe the region as well, expanding our knowledge of the very distant universe.

The current ALMA observations, which required approximately 40 hours of observing time, cover an area of the sky that is one arcminute on each side, about one sixth of the total HUDF. An approved future 150-hour observing campaign dubbed ASPECS – the ALMA Spectroscopic Survey in the Hubble UDF — will cover a much larger area and further illuminate the star-forming potential history of the universe.

“By supplementing our understanding of this missing star-forming material, the forthcoming large spectroscopic survey will complete our view of the well-known galaxies in the iconic Hubble Ultra Deep Field,” said Fabian Walter, also with the MPIA and member of the research team.

The ALMA Spectroscopic Survey in the Hubble UDF (ASPECS) is designated a so-called “Large Program” for ALMA and has been approved for observations during Cycle 4, which begins October 2016 and continues through September 2017. The principal investigators on that proposal are Chris Carilli, National Radio Astronomy Observatory; Fabian Walter, Max Planck Institute for Astronomy; and Manuel Aravena, Diego Portales University.

Earlier searches to map the distribution of cool gas in the early universe have been carried out using the Plateau de Bure observatory in the French Alps and with the NRAO’s Karl G. Jansky Very Large Array.

The following papers are accepted for publication in the Astrophysical Journal [http://apj.aas.org].


An additional survey of the HUDF, “A deep ALMA image of the Hubble Ultra Deep Field”, by J. Dunlop et al., will appear in the Monthly Notices of the Royal Astronomical Society. 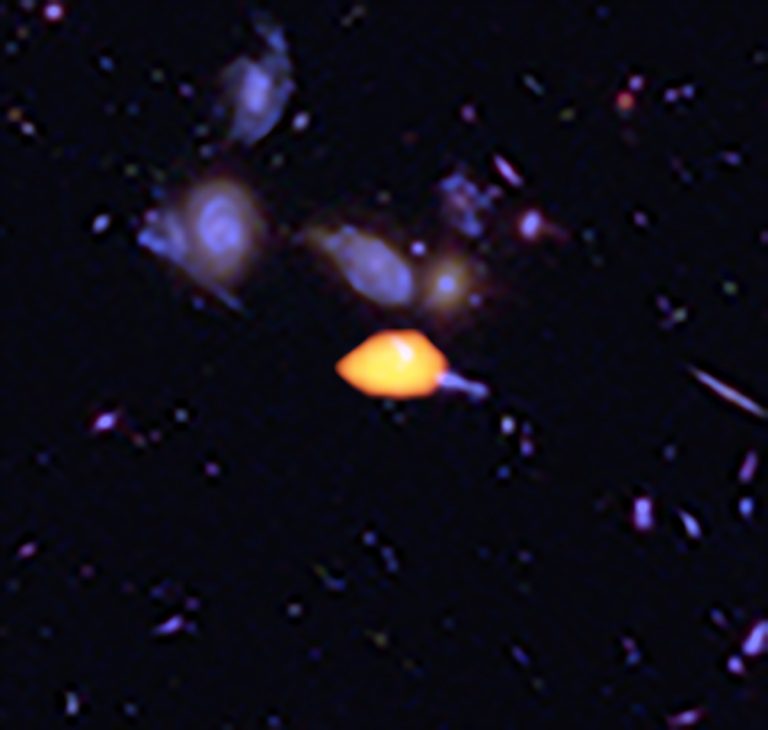 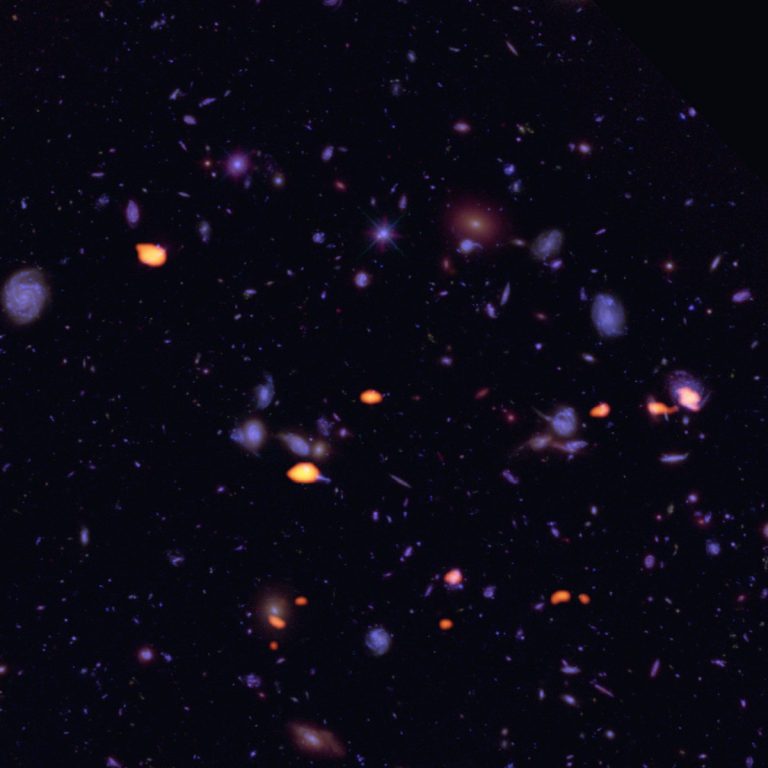 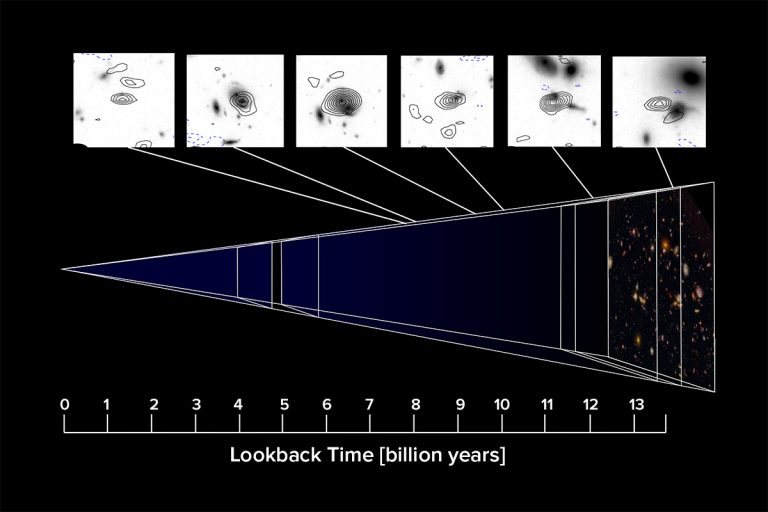 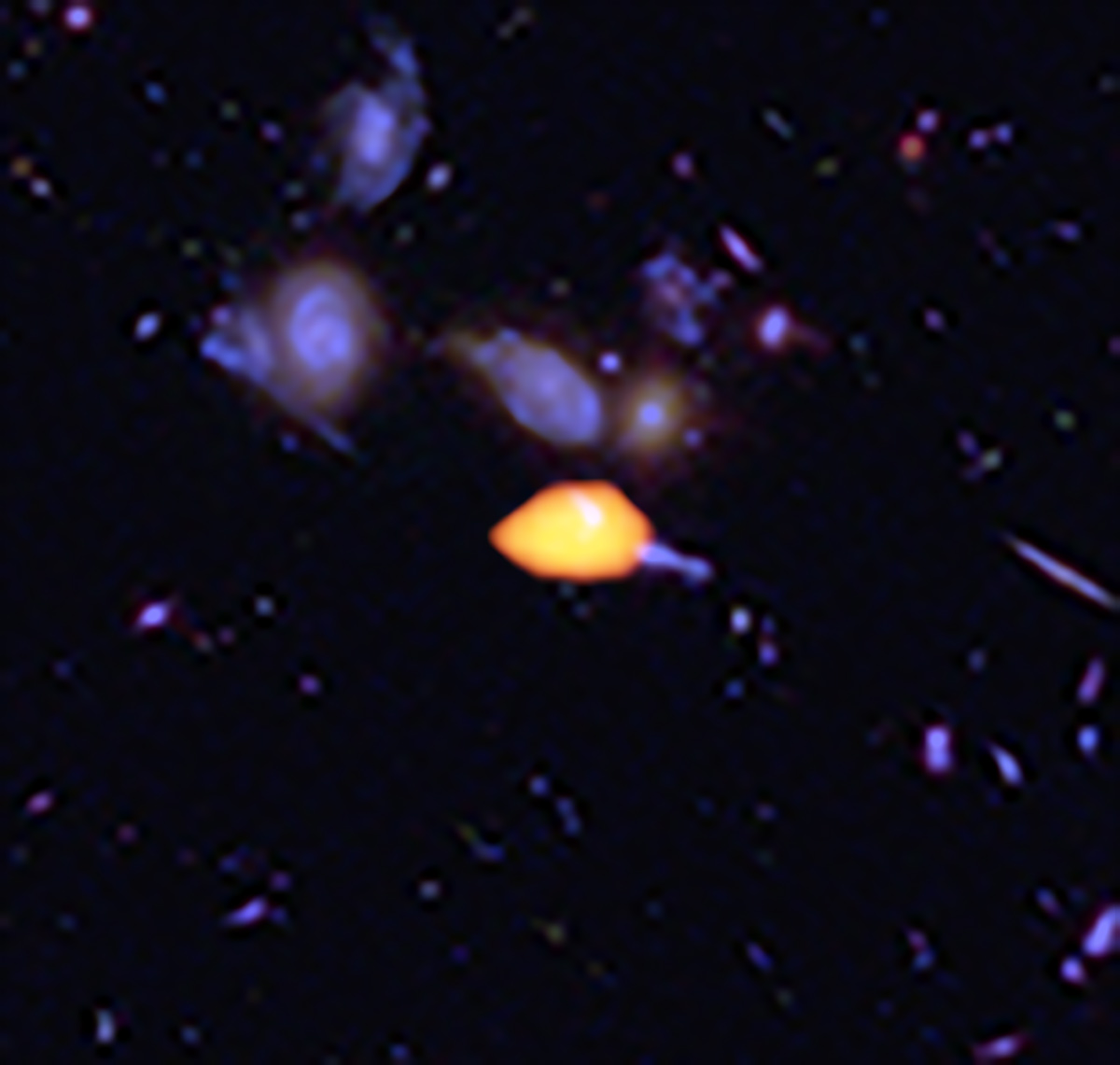 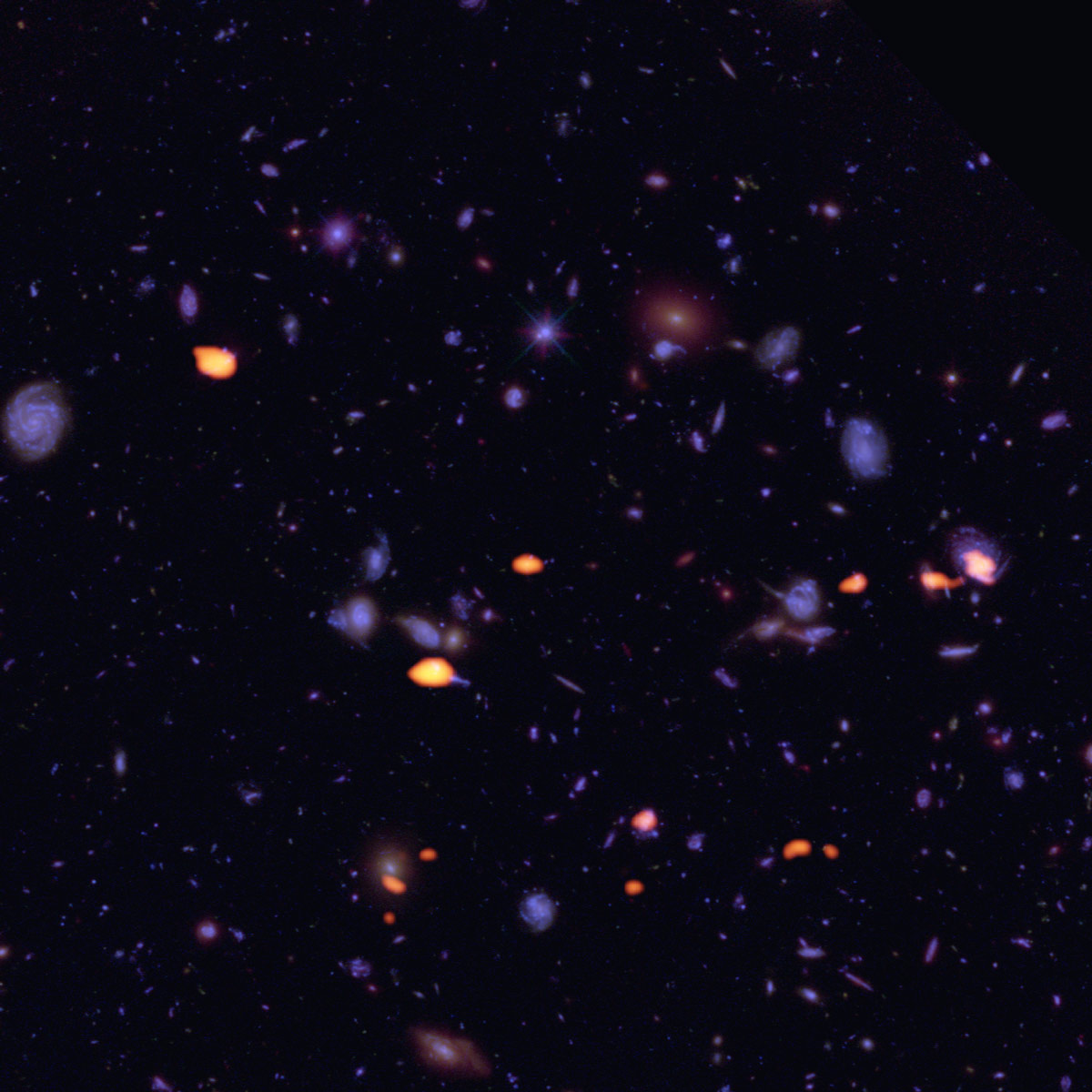 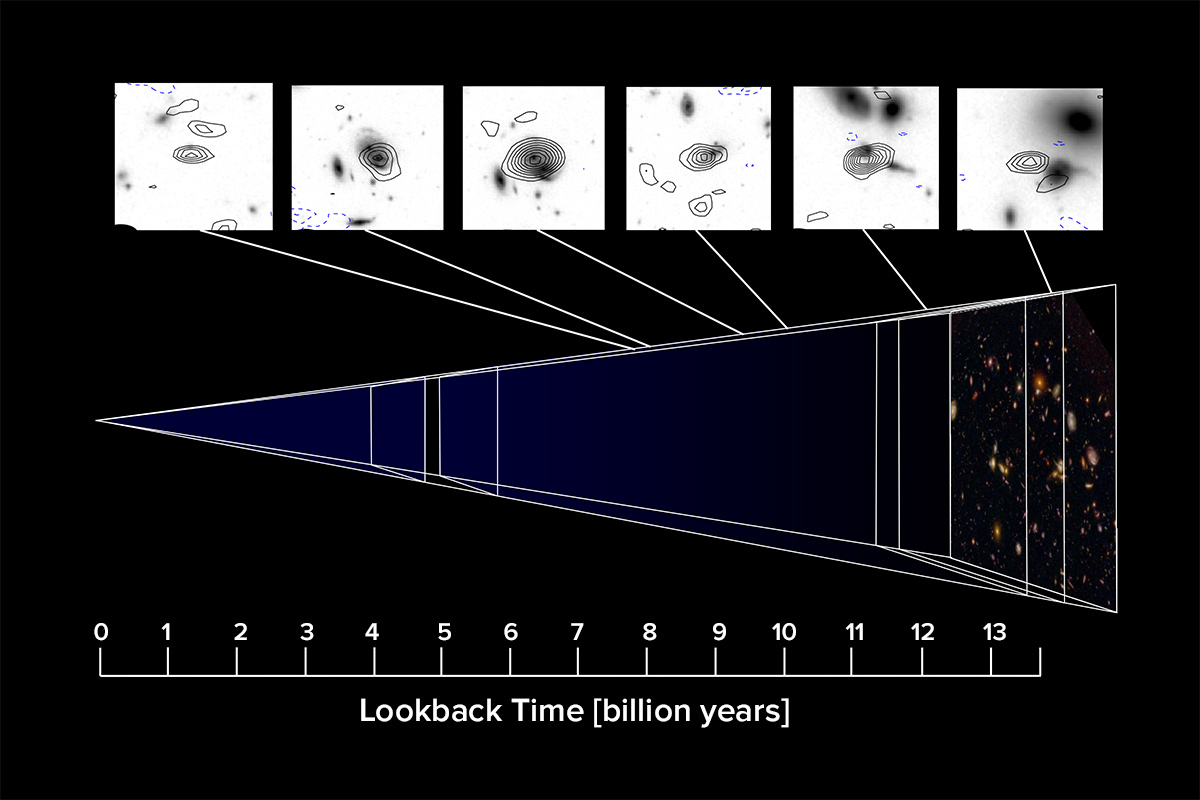