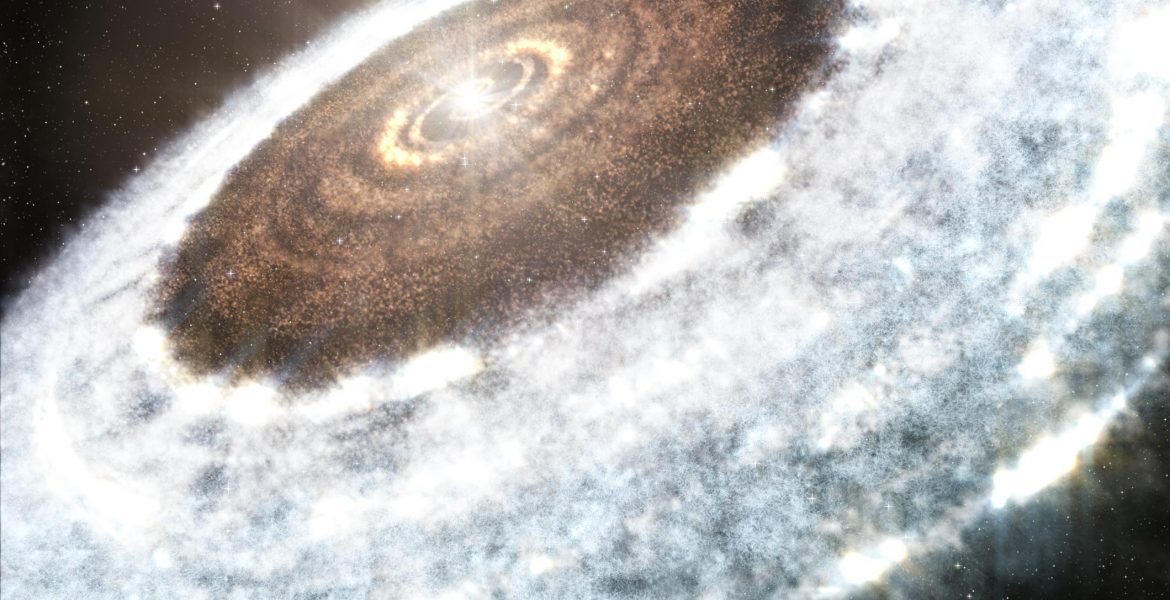 A violent outburst by the young star V883 Orionis has given astronomers their first view of a water “snowline” in a protoplanetary disk – the transition point around the star where the temperature and pressure are low enough for water ice to form.

An abrupt increase in the brightness of the star “flash heated” the inner portion of the disk, pushing the water snowline out much farther than normal, enabling astronomers to image it with the Atacama Large Millimeter/submillimeter Array (ALMA). Under normal conditions, the water snowline would be much too close to the protostar to observe directly, even with ALMA’s remarkable resolution.

Typically, heat from a young Sun-like star prevents water molecules from freezing within a radius of about three astronomical units, around 450 million kilometers, from the star. (An astronomical unit – AU – is the average distance from the Earth to the Sun). Beyond that point, known as the snowline, water condenses to form a layer of ice on dust grains and other particles.

An abrupt and powerful increase in the brightness of V883 Orionis, however, has pushed the water snowline out to approximately 40 AU (about 6 billion kilometers), a distance that corresponds roughly to the orbit of Pluto in our solar system.

Even though V883 Orionis is only 30 percent more massive than our Sun, it is currently 400 times more luminous and much hotter, thanks to its recent outburst triggered by material from the disk falling onto the surface of the star.

“The ALMA observations came as a surprise to us,” said Lucas Cieza, an astronomer at Diego Portales University, Santiago, Chile, and lead author of a paper describing these results published in the journal Nature. “Our observations were designed to image disk fragmentation, which is one of the proposed mechanisms for the formation of giant planets. We saw none of that, as the disk is probably too warm to fragment despite its very large mass. Instead, we found what looks like a ring at 40 AU. This illustrates well the transformational power of ALMA, which delivers exciting results even if they are not the ones we were looking for.”

“The distribution of water ice around a young star is fundamental to planet formation and even the development of life on Earth. ALMA’s observation sheds important light on how and where this happens in protoplanetary disks when young planets are still forming,” said Zhaohuan Zhu, an astronomer at Princeton University, New Jersey, and co-author on the paper. “We now have direct evidence that a frosty region conducive to planet formation exists around other stars.”

Water ice helps regulate the agglomeration of dust grains into larger and larger particles. Astronomers believe that within the snowline, where water is vaporized, conditions favor the formation of smaller, rocky planets like Mars and Earth. Outside the water snowline, the presence of ice allows for the rapid formation of snowballs and cometary bodies, which facilitate the formation of massive gaseous planets such as Jupiter.

“Since water ice is more abundant than dust itself beyond the snowline, planets can aggregate more solid material and form bigger and faster there. In this way, giant planets like Jupiter and Saturn can form before the protoplanetary disk is gone,” noted Zhu.

The discovery that these outbursts may blast the water snow line to about 10 times its typical radius is very significant to the development of reliable planetary formation models. Such outbursts are believed to be a stage in the evolution of most planetary systems, so this may be the first observation of a common occurrence. In that case, this direct observation from ALMA could contribute substantially to an improved understanding of how planets throughout the Universe form and evolve. It also sheds light on how water ice may have been distributed in our own protoplanetary disk.

The star V883 Orionis is located approximately 1,350 light-years from Earth in the Orion Nebula Cluster. At this distance, ALMA was able to achieve a resolution of about 12 AU — enough to resolve the water snowline in this system but insufficient to do so around a typical young star.

This research was presented in the paper titled “Imaging the water snow-line during a protostellar outburst,” by L. Cieza et al., to appear in Nature on 14 July 2016.

ALMA has imaged snowlines for other molecules previously. 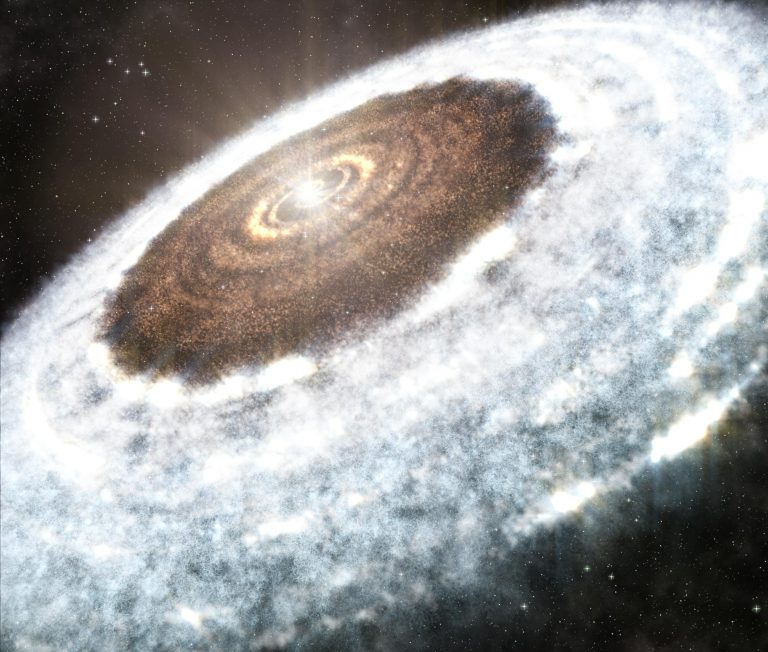 Artist impression of the water snowline around the young star V883 Orionis, as detected with...Read More
Credit: A. Angelich (NRAO/AUI/NSF) 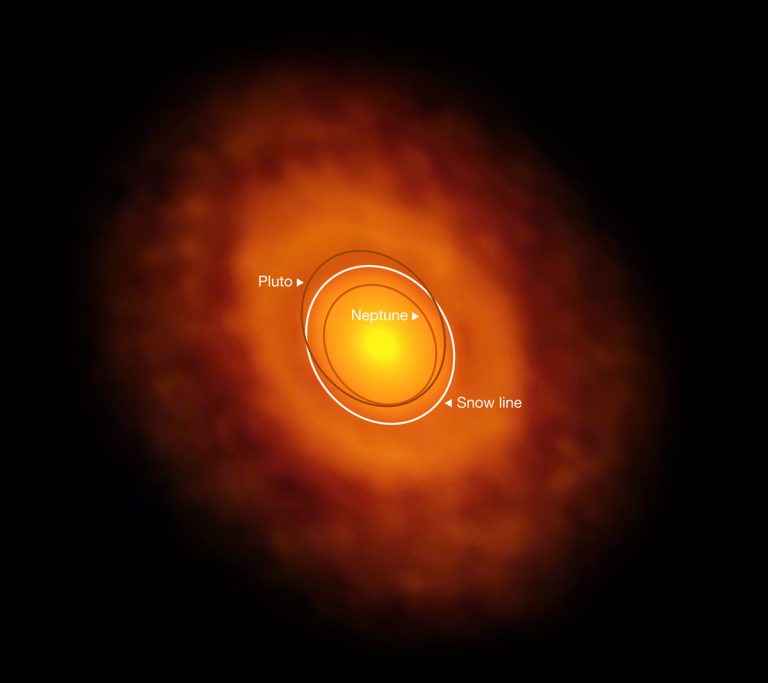 This illustration shows how the outburst of the young star V883 Orionis has displaced the...Read More
Credit: ALMA (ESO/NAOJ/NRAO)/L. Cieza 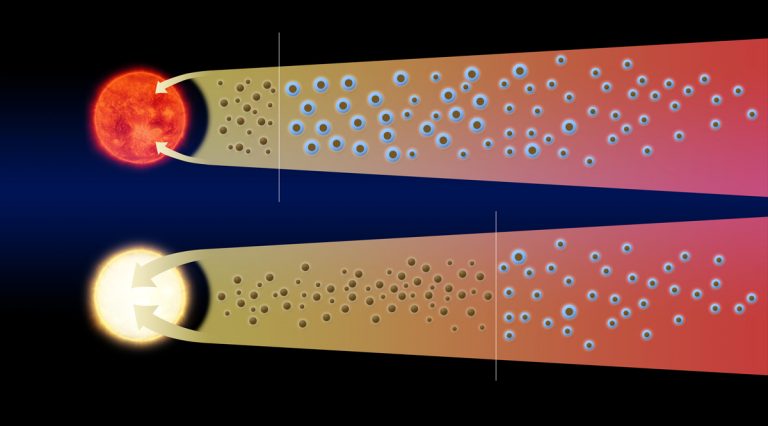 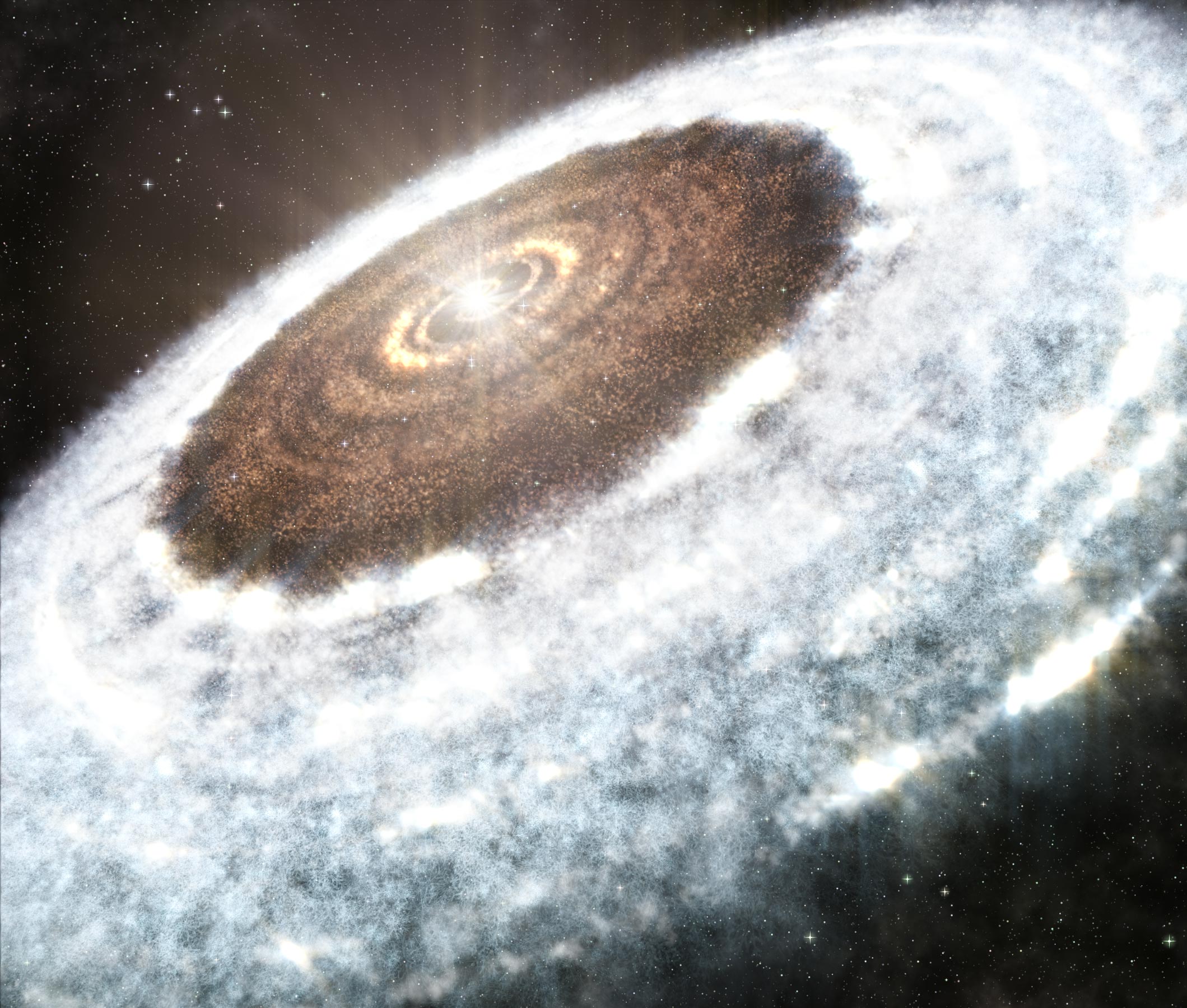 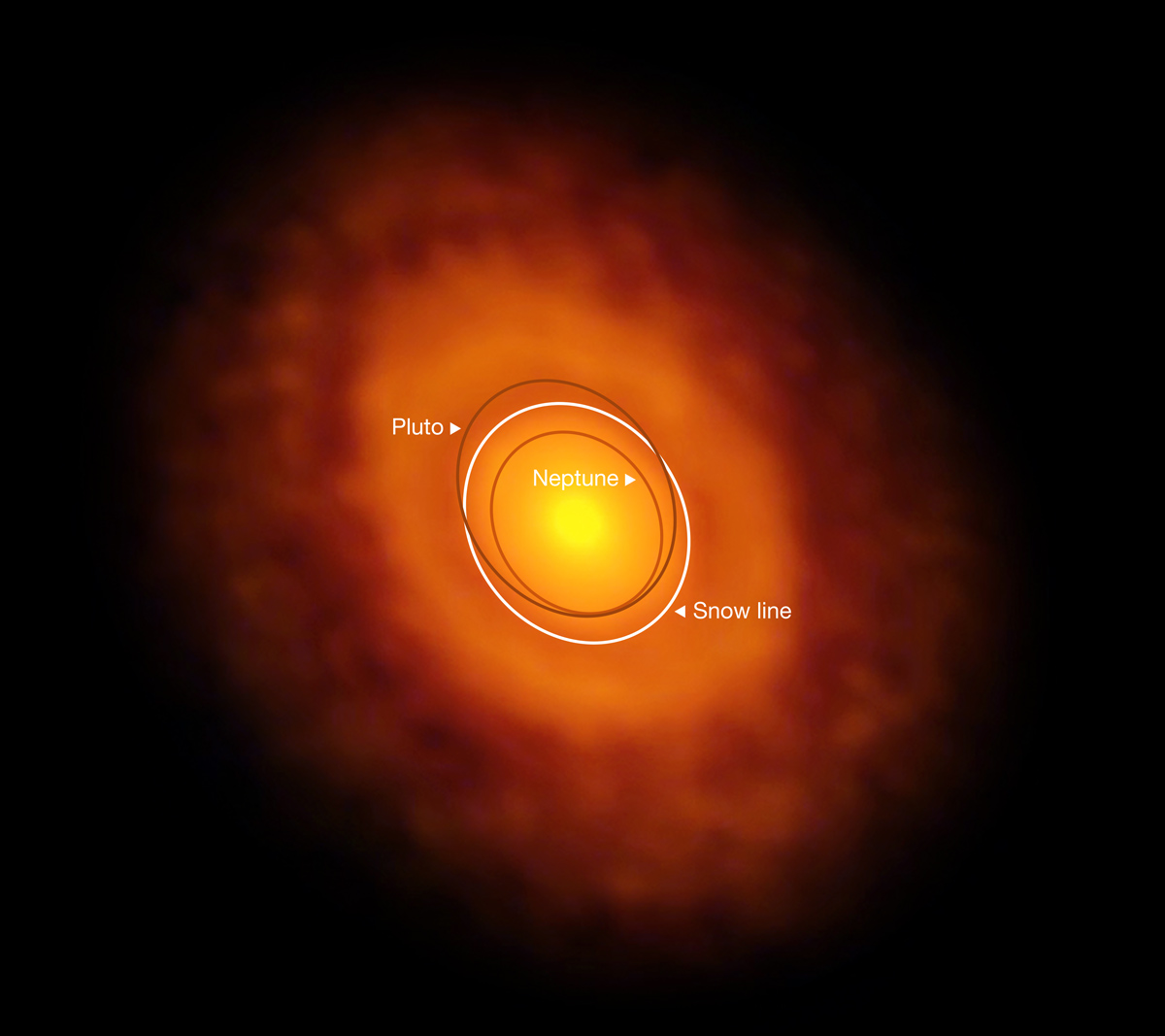 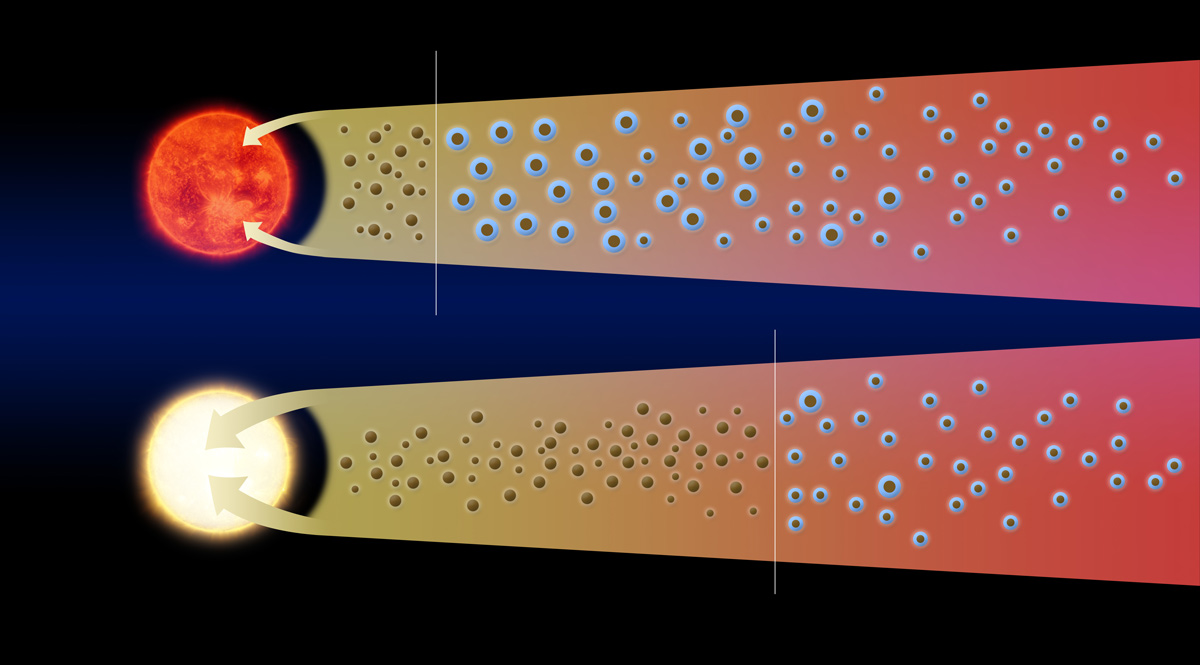