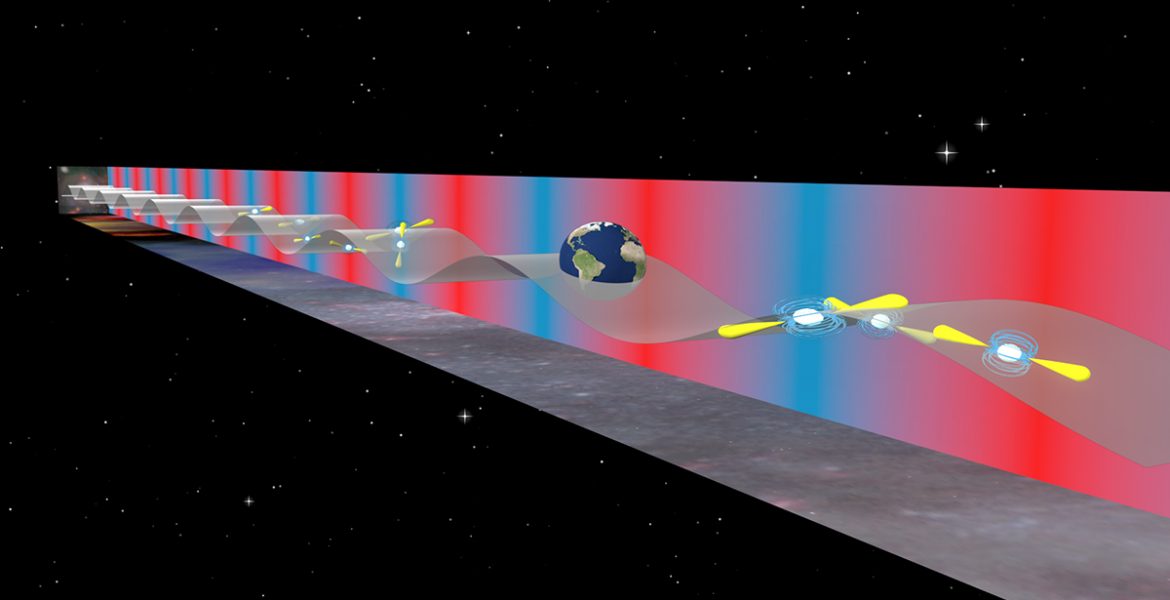 Summary: New results from NANOGrav – the North American Nanohertz Observatory for Gravitational Waves – establish astrophysically significant limits in the search for low-frequency gravitational waves. This result provides insight into how often galaxies merge and how those merging galaxies evolve over time. To obtain this result, scientists required an exquisitely precise, nine-year pulsar-monitoring campaign conducted by two of the most sensitive radio telescopes on Earth, the Green Bank Telescope in West Virginia and the Arecibo Observatory in Puerto Rico.

The recent LIGO detection of gravitational waves from merging black holes with tens of solar masses has confirmed that distortions in the fabric of space-time can be observed and measured [1]. Researchers from the North American Nanohertz Observatory for Gravitational Waves (NANOGrav) have spent the past decade searching for low-frequency gravitational waves emitted by black hole binaries with masses many millions of times larger than those seen by LIGO.

Analysis of NANOGrav’s nine-year dataset provides very constraining limits on the prevalence of such supermassive black hole binaries throughout the Universe. Given scientists’ current understanding of how often galaxies merge, these limits point to fewer detectable supermassive black hole binaries than were previously expected. This result has significant impacts on our understanding of how galaxies and their central black holes co-evolve.

Low-frequency gravitational waves are very difficult to detect, with wavelengths spanning light-years and originating from black hole binaries in galaxies spread across the sky. The combination of all these giant binary black holes leads to a constant “hum” of gravitational waves that models predict should be detectable at Earth. Astrophysicists call this effect the “stochastic gravitational wave background,” and detecting it requires special analysis techniques.

Pulsars are the cores of massive stars left behind after stars go supernova. The fastest pulsars rotate hundreds of times each second and emit a pulse of radio waves every few milliseconds. These millisecond pulsars (MSPs) are considered nature’s most precise clocks and are ideal for detecting the small signal from gravitational waves. “This measurement is possible because the gravitational wave background imprints a unique signature onto the radio waves seen from a collection of MSPs,” said Justin Ellis, Einstein Fellow at NASA’s Jet Propulsion Laboratory, California Institute of Technology in Pasadena, California, and a co-author on the report published in Astrophysical Journal.

Ellis continues: “After nine years of observing a collection of MSPs, we haven’t detected the stochastic background but we are beginning to rule out many predictions based on current models of galaxy evolution. We are now at a point where the non-detection of gravitational waves is actually improving our understanding of black hole binary evolution.”

“Pulsar timing arrays like NANOGrav are making novel observations of the evolution and nature of our Universe,” says Sarah Burke Spolaor, Jansky Fellow at the National Radio Astronomy Observatory (NRAO) in Socorro, New Mexico, and a co-author on the paper.

According to Spolaor, there are two possible interpretations of this non-detection. “Some supermassive black hole binaries may not be in circular orbits or are significantly interacting with gas or stars. This would drive them to merge faster than simple models have assumed in the past,” she said. An alternate explanation is that many of these binaries inspiral too slowly to ever emit detectable gravitational waves.

NANOGrav is currently monitoring 54 pulsars, using the National Science Foundation’s Green Bank Telescope in West Virginia and Arecibo Radio Observatory in Puerto Rico, the two most sensitive radio telescopes at these frequencies [2]. Their array of pulsars is continually growing as new MSPs are discovered. In addition, the group collaborates with radio astronomers in Europe and Australia as part of the International Pulsar Timing Array, giving them access to many more pulsar observations. Ellis estimates that this increase in sensitivity could lead to a detection in as little as five years.

In addition, this measurement helps constrain the properties of cosmic strings, very dense and thin cosmological objects, which many theorists believe evolved when the Universe was just a fraction of a second old. These strings can form loops, which then decay through gravitational wave emission. The most conservative NANOGrav limit on cosmic string tension is the most stringent limit to date, and will continue to improve as NANOGrav continues operating.

“These new results from NANOGrav have the most important astrophysical implications yet,” said Scott Ransom, an astronomer with the NRAO in Charlottesville, Virginia. “As we improve our detection capabilities, we get closer and closer to that important threshold where the cosmic murmur begins to be heard. At that point, we’ll be able to perform entirely new types of physics experiments on cosmic scales and open up a new window on the Universe, just like LIGO just did for high-frequency gravitational waves.”

NANOGrav is a collaboration of over 60 scientists at over a dozen institutions in the United States and Canada whose goal is detecting low-frequency gravitational waves to open a new window on the Universe. The group uses radio pulsar timing observations to search for the ripples in the fabric of spacetime. In 2015, NANOGrav was awarded $14.5 million by the National Science Foundation (NSF) to create and operate a Physics Frontiers Center. 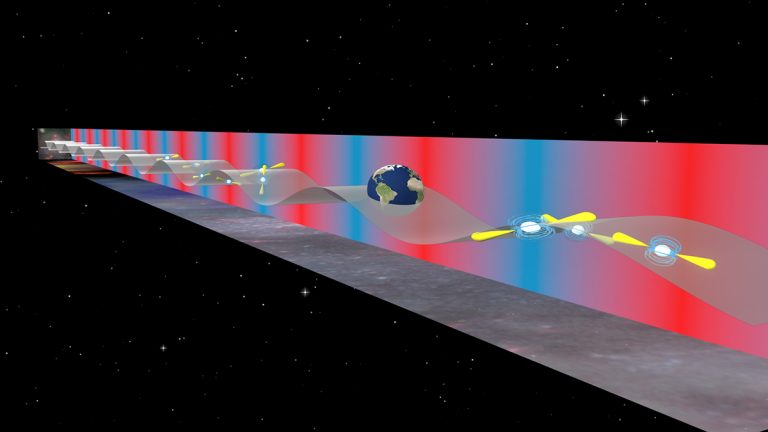 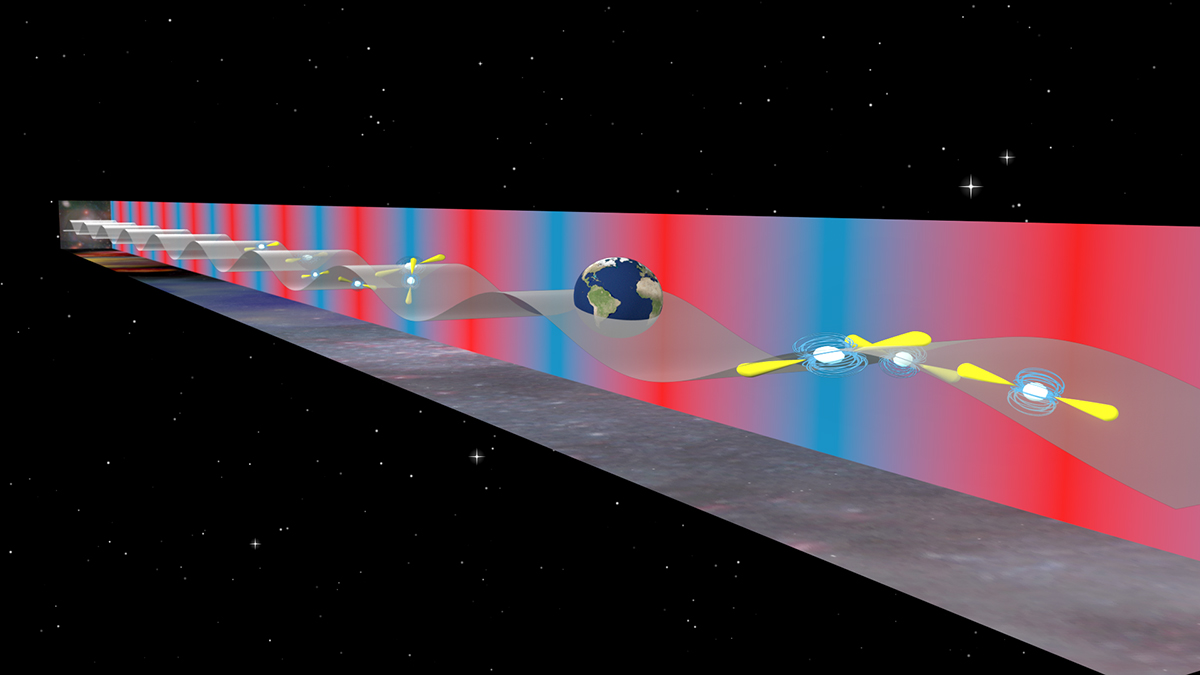