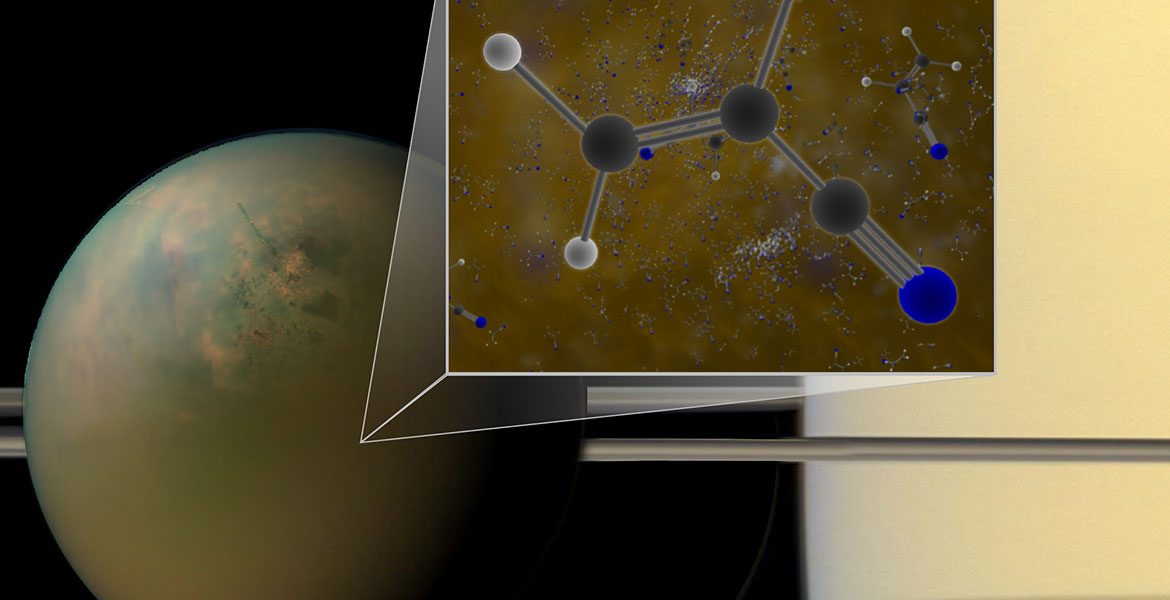 Summary: Saturn’s frigid moon Titan has a curious atmosphere. In addition to a hazy mixture of nitrogen and hydrocarbons, like methane and ethane, Titan’s atmosphere also contains an array of more complex organic molecules, including vinyl cyanide, which astronomers recently uncovered in archival ALMA data. Under the right conditions, like those found on the surface of Titan, vinyl cyanide may naturally coalesce into microscopic spheres resembling cell membranes.

Saturn’s largest moon, Titan, is one of our solar system’s most intriguing and Earth-like bodies. It is nearly as large as Mars and has a hazy atmosphere made up mostly of nitrogen with a smattering of organic, carbon-based molecules, including methane (CH4) and ethane (C2H6). Planetary scientists theorize that this chemical make-up is similar to Earth’s primordial atmosphere.

The conditions on Titan, however, are not conducive to the formation of life as we know it; it’s simply too cold. At ten times the distance from the Earth to the sun, Titan is so cold that liquid methane rains onto its solid icy surface, forming rivers, lakes, and seas.

These pools of hydrocarbons, however, create a unique environment that may help molecules of vinyl cyanide (C2H3CN) link together to form membranes, features resembling the lipid-based cell membranes of living organisms on Earth.

Astronomers using archival data from the Atacama Large Millimeter/submillimeter Array (ALMA), which was collected over a series of observations from February to May 2014, have found compelling evidence that molecules of vinyl cyanide are indeed present on Titan and in significant quantities.

“The presence of vinyl cyanide in an environment with liquid methane suggests the intriguing possibility of chemical processes that are analogous to those important for life on Earth,” said Maureen Palmer, a researcher at NASA’s Goddard Space Flight Center in Greenbelt, Maryland, and lead author on a paper published in Science Advances.

Previous studies by NASA’s Cassini spacecraft, as well as laboratory simulations of Titan’s atmosphere, inferred the likely presence of vinyl cyanide on Titan, but it took ALMA to make a definitive detection.

By reviewing the archival data, Palmer and her colleagues found three distinct signals – spikes in the millimeter-wavelength spectrumSpectrumA plot or distribution of light intensity at different frequencies and wavelengths. – that correspond to vinyl cyanide. These telltale signatures originated at least 200 kilometers above the surface of Titan.

Titan’s atmosphere is a veritable chemical factory, harnessing the light of the sun and the energy from fast-moving particles that orbit around Saturn to convert simple organic molecules into larger, more complex chemicals.

“As our knowledge of Titan’s chemistry grows, it becomes increasingly apparent that complex molecules arise naturally in environments similar to those found on the early Earth, but there are important differences,” said Martin Cordiner, also with NASA’s Goddard Space Flight Center and a co-author on the paper.

For example, Titan is much colder than Earth at any period in its history. Titan averages about 95 kelvinsKelvins (Kelvin)A scale that measures an object's temperature over absolute zero, which is the lower limit of thermodynamic temperature. A particle at this temperature would experience almost no motion whatsoever, only experiencing motion due to quantum effects. (-290 degrees Fahrenheit), so water at its surface remains frozen. Geologic evidence also suggests that the early Earth had high concentrations of carbon dioxide (CO2); Titan does not. Earth’s rocky surface was also frenetically active, with extensive volcanism and routine asteroid impacts, which would have affected the evolution of our atmosphere. In comparison, Titan’s icy crust appears quite docile.

“We are continuing to use ALMA to make further observations of Titan’s atmosphere,” concluded Conor Nixon, also with NASA’s Goddard Space Flight Center and a co-author on the paper. “We are looking for new and more complex organic chemicals as well as studying this moon’s atmospheric circulation patterns. In the future, higher-resolution studies will shed more light on this intriguing world and hopefully give us new insights into Titan’s potential for prebiotic chemistry.”

These results are in a paper titled “ALMA Detection and Astrobiological Potential of Vinyl Cyanide on Titan,” M. Palmer et al., appearing in Science Advances.

This work was supported by the National Science Foundation under Grant No. AST-1616306 and NASA’s Astrobiology Program through a grant to the Goddard Center for Astrobiology, a part of the NASA Astrobiology Institute. 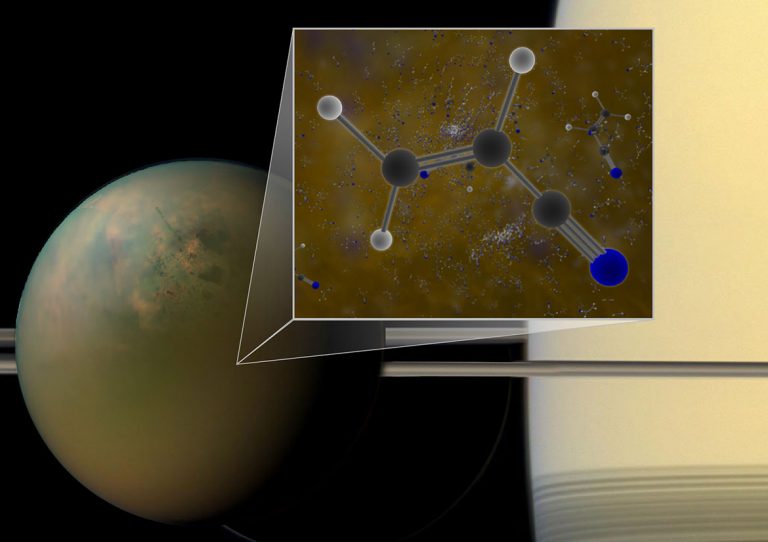 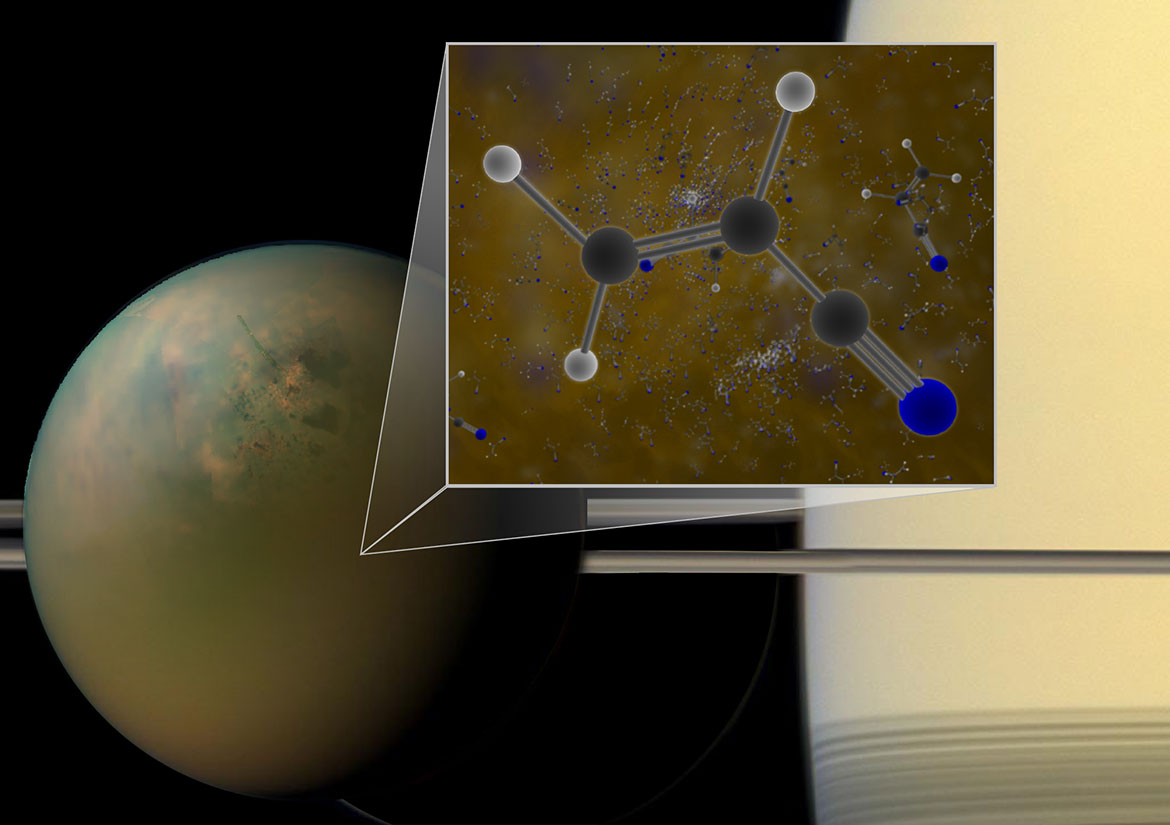