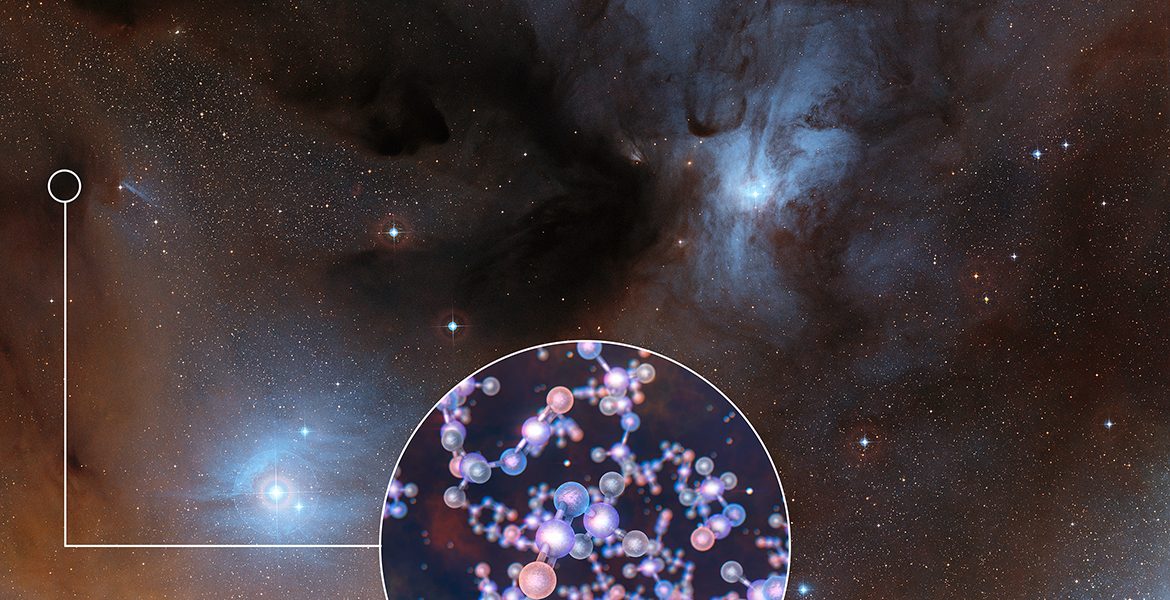 Our solar system is teeming with simple carbon-based molecules, the basic building blocks of life. If the conditions are right, these simple molecules can go on to form more complex, biologically interesting molecules, such as amino acids and proteins. Though it’s a long way from a few simple molecules to even the most basic proteins, detecting chemistry similar to Earth’s around distant stars suggests that the pathway to life may be possible on other worlds.

Recently, two teams of astronomers using the Atacama Large Millimeter/submillimeter Array (ALMA) have found traces of the organic molecule methyl isocyanate around a multiple star system about 400 light-years from Earth known as IRAS 16293-2422. The newly emerging stars in the system bear a striking resemblance to what scientists believe would be versions our own sun.

To life on Earth, methyl isocyanate is highly toxic. However, in the interstellar environment it can combine with other molecules to form peptides and amino acids, and may therefore be essential for life.

Previously, methyl isocyanate has been found in comets in our own solar system, which means that it was around when Earth and the other planets coalesced out of a massive cloud of dust and gas some 4.6 billion years ago. Finding it around solar-type protostars helps to open a window to the past for astronomers, allowing them to observe conditions similar to those that led to the formation of our solar system.

Astronomers Rafael Martín-Doménech at the Centro de Astrobiología in Madrid, Spain, and Víctor M. Rivilla, at the INAF-Osservatorio Astrofisico di Arcetri in Florence, Italy, co-led one of the research teams. The other was led by Niels Ligterink at the Leiden Observatory in the Netherlands and Audrey Coutens at University College London, United Kingdom.

ALMA’s capabilities allowed both teams to independently observe the molecule — which has unique chemical fingerprints in the radio spectrum — deep inside the warm, dense cocoon of dust and gas that surrounds these stars, which are in their earliest stages of evolution.

“This molecule is especially noteworthy because it is found toward a protostar that is similar in many respects to the environment in which the sun and planets were formed,” said Rob Garrod, a chemist at the University of Virginia in Charlottesville and co-author on one of the papers.

“We are particularly excited about the result because these protostars are very similar to the Sun at the beginning of its lifetime, with the sort of conditions that are well suited for Earth-sized planets to form. By finding prebiotic molecules in this study, we may now have another piece of the puzzle in understanding how life came about on our planet,” noted Rafael Martín-Doménech and Víctor M. Rivilla, lead authors on one of the papers.

The researchers then used computer chemical modeling and laboratory experiments to refine their understanding of the molecule’s origin.

“Besides detecting molecules we also want to understand how they are formed. Our laboratory experiments show that methyl isocyanate can indeed be produced on icy particles under very cold conditions that are similar to those in interstellar space This implies that this molecule — and thus the basis for peptide bonds — is indeed likely to be present near most new young solar-type stars,” said Niels Ligterink at the Leiden Observatory in the Netherlands.

The system was previously studied by ALMA in 2012 and found to contain molecules of the simple sugar glycolaldehyde, another ingredient for life.

This research was presented in two papers: “First Detection of Methyl Isocyanate (CH3NCO) in a solar-type Protostar” by R. Martín-Doménech et al. and “The ALMA-PILS survey: Detection of CH3NCO toward the low-mass protostar IRAS 16293-2422 and laboratory constraints on its formation”, by N. F. W. Ligterink et al.. Both papers will appear in the same issue of the Monthly Notices of the Royal Astronomical Society. 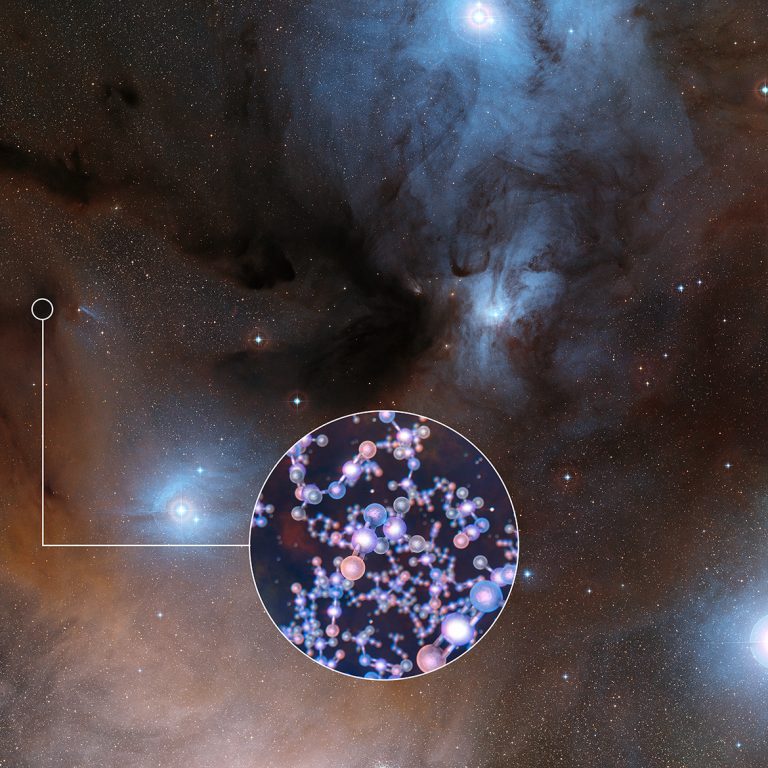 ALMA has observed stars like the Sun at a very early stage in their formation and found traces of methyl isocyanate — a chemical building block of life. This is the first ever detection of this prebiotic molecule toward a solar-type protostar, the sort from which our solar system evolved. The discovery could help astronomers understand how life arose on Earth. This image shows the spectacular region of star formation where methyl isocyanate was found. The insert shows the molecular structure of this chemical.
Credit: ESO/Digitized Sky Survey 2/L. Calçada 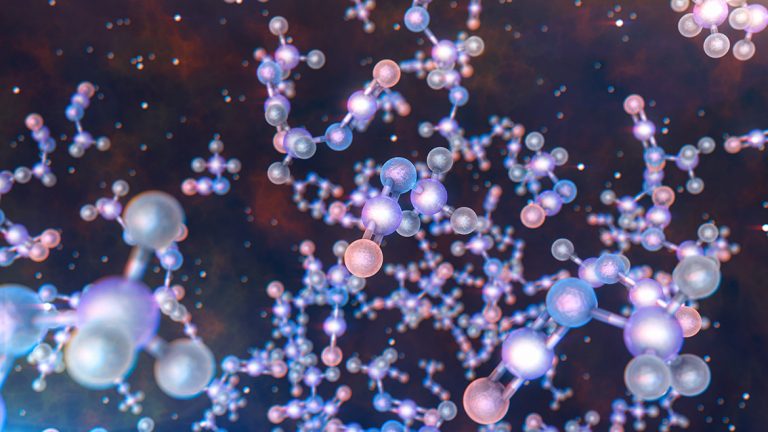 ALMA has observed stars like the Sun at a very early stage in their formation and found traces of methyl isocyanate — a chemical building block of life. This is the first ever detection of this prebiotic molecule towards a solar-type protostar, the sort from which our Solar System evolved. The discovery could help astronomers understand how life arose on Earth. This artist's impression gives a very close-up view of what these molecules look like.
Credit: ESO/L. Calçada 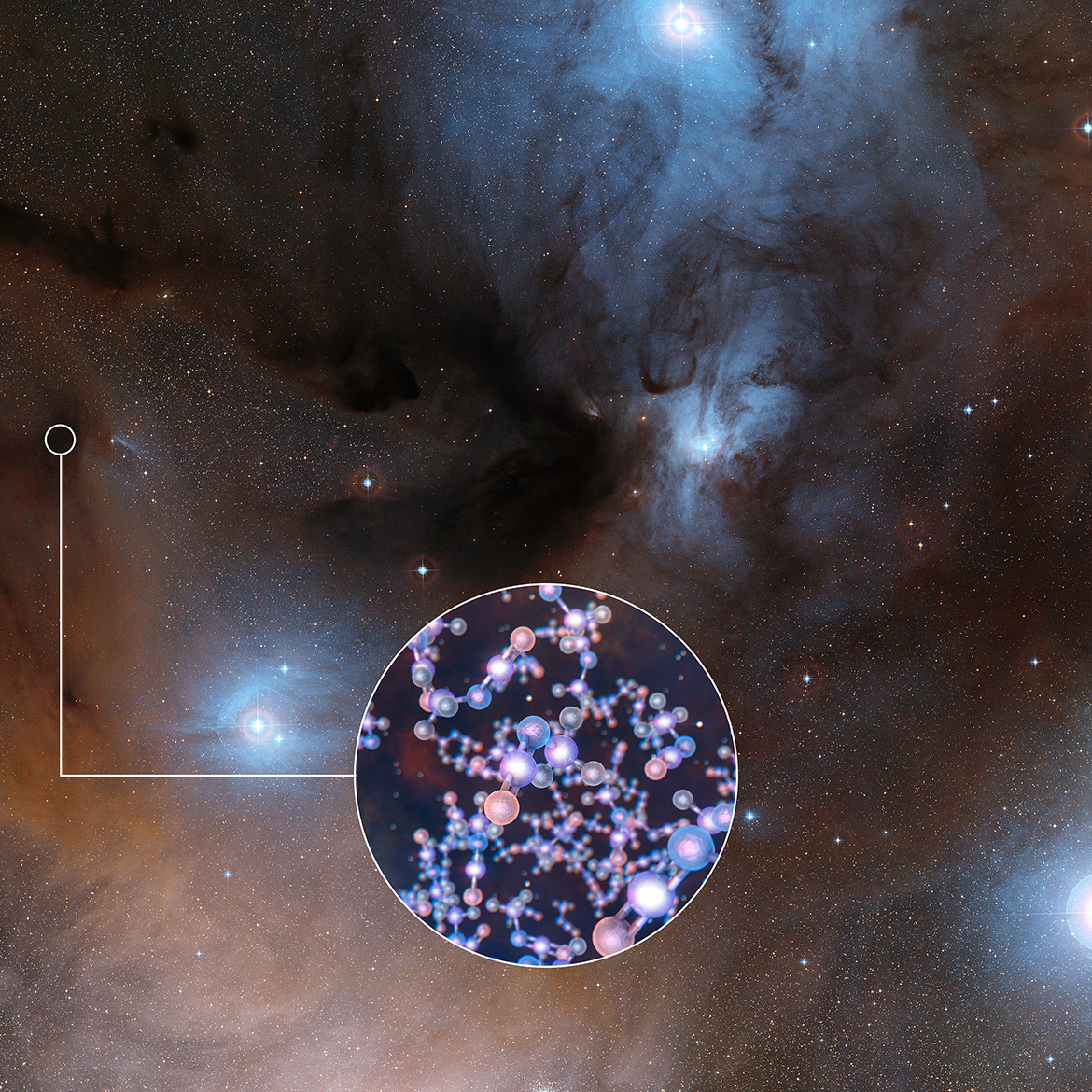 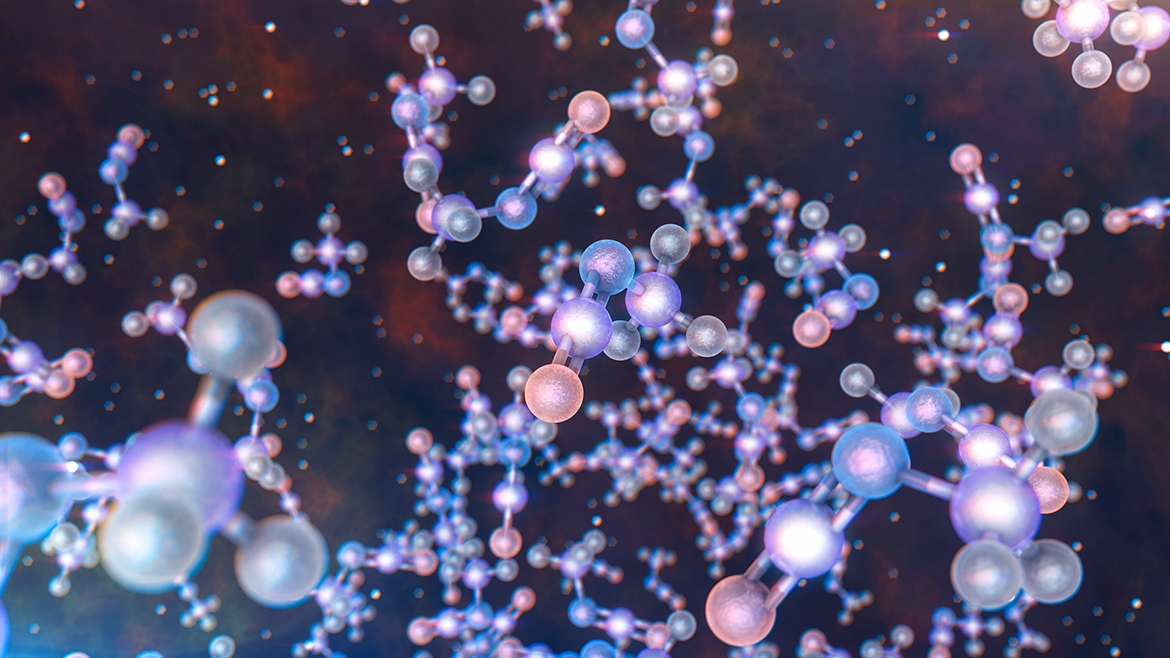