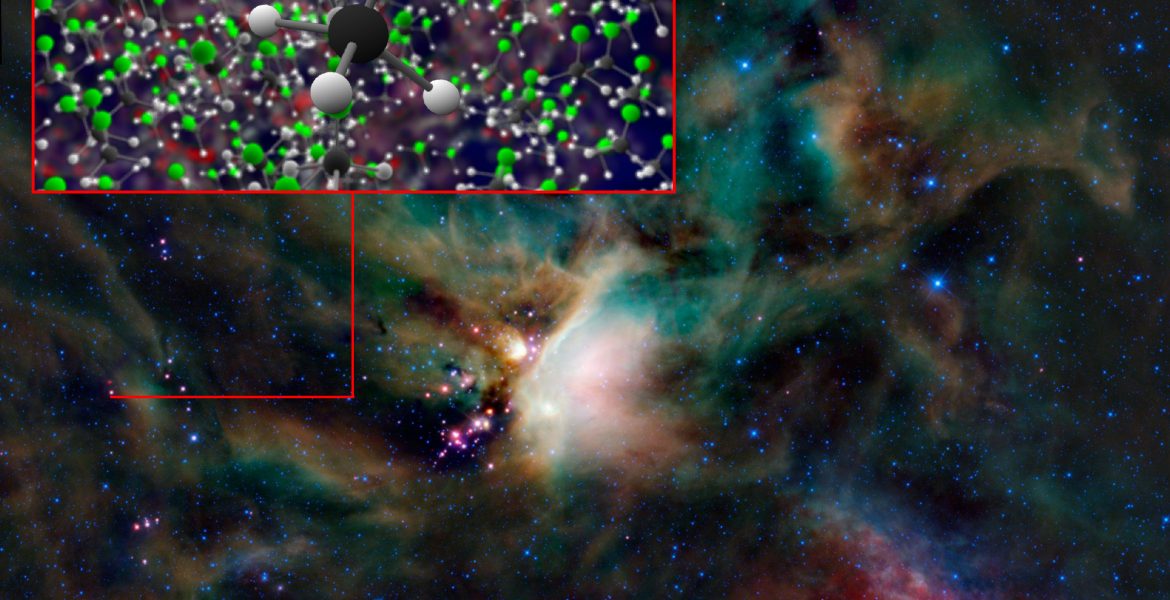 Astronomers using the Atacama Large Millimeter/submillimeter Array (ALMA) have detected the faint molecular fingerprint of methyl chloride – a chemical commonly produced by industrial and biological processes here on Earth – around an infant star system known as IRAS 16293-2422. Traces of this organic compound were also discovered in the thin atmosphere of comet 67P/Churyumov-Gerasimenko (67P/C-G) by the Rosetta space probe.

Methyl chloride (CH3Cl), also known as Freon-40, is one of a class of molecules known as organohalogens. This new ALMA observation is the first detection ever of a stable organohalogen in interstellar space. The results are published in the journal Nature Astronomy.

The cosmic discovery of this organic compound, however, is disappointing news for astrobiologists, who previously suggested searching for methyl chloride in the atmospheres of alien worlds as a possible indicator of life. The recent ALMA and Rosetta detections raise doubts about that proposal, however. They indicate that methyl chloride forms naturally in interstellar clouds and endures long enough to become part of a forming solar system.

IRAS 16293-2422 is a collection of several infant stars, or protostars, each about the same mass as our Sun. It is located about 400 light-years from Earth and is still surrounded by its natal cocoon of dust and gas.

“Finding organohalogens near these young, Sun-like stars was surprising,” said lead author Edith Fayolle, a researcher with the Harvard-Smithsonian Center for Astrophysics (CfA) in Cambridge, Mass., at the time of the discovery. “We simply didn’t predict its formation and were surprised to find it in such significant concentrations. It’s clear now that these molecules form readily in stellar nurseries, providing insights into the chemical evolution of solar systems, including our own.”

“ALMA’s discovery of organohalogens in the interstellar medium also tells us something about the starting conditions for organic chemistry on planets. Such chemistry is an important step toward the origins of life,” said Karin Öberg, an astrochemist at CfA and co-author on the study. “Based on our discovery, organohalogens are likely to be a constituent of the so-called ‘primordial soup’, both on the young Earth and on newly formed rocky exoplanets.”

ALMA is able to function as an interstellar chemical analyzer by detecting the faint radio signals naturally emitted by molecules in space. Each molecule has a distinctive fingerprint, or series of spikes, in the radio spectrum. For large, organic molecules, however, that signal can be difficult to detect. Larger molecules emit a wider range, though subsequently weaker, series of spikes in the spectrum. It takes incredibly sensitive instruments like ALMA to tease out the telltale signal from molecules like methyl chloride.

The Rosetta spacecraft was able to detect the molecule in the atmosphere of comet 67P/C-G using the onboard instrument known as the Rosetta Orbiter Spectrometer for Ion and Neutral Analysis (ROSINA).

“ROSINA was able to capture some of the molecules around the comet, separate them by mass, and count them with an exquisite precision,” said Kathrin Altwegg with the University of Bern, Switzerland, and principal investigator of ROSINA. “This highly sensitive instrument enabled us to detect a host of chemicals around the comet, including the one also discovered by ALMA far from our solar system.”

The researchers also note that abundant organohalogens around a young Sun-like analog demonstrates that the organic chemistry present in the interstellar medium involves halogens, which was previously not known.

In addition, both ALMA and Rosetta detected this molecule in similar abundance ratios. Since comets are a remnant of the formation of our solar system and retain a chemical fingerprint of that era, the new observations support the idea that a young solar system can inherit the chemical make-up of its parent star-forming cloud.

“This does, however, raise the question: How much of the comet’s organic content is directly inherited from the early stages of star formation?” said Fayolle. “Additional searches for organohalogens around other protostars and comets need to be undertaken to help find the answer.”

The ALMA data were from the ALMA Protostellar Interferometric Line Survey (PILS). The aim of this survey is to chart the chemical complexity of IRAS 16293-2422 by imaging the full wavelength range covered by ALMA in the 0.8-millimeter atmospheric window on very small scales, equivalent to the size of the solar system. 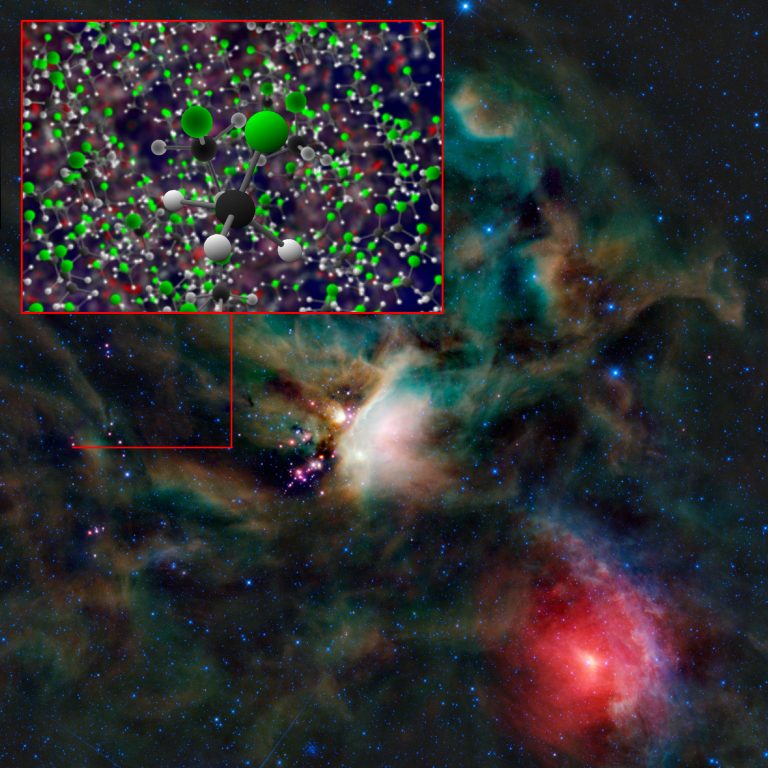 Organohalogen methyl chloride discovered by ALMA around the infant stars in IRAS 16293-2422. These same...Read More
Credit: B. Saxton (NRAO/AUI/NSF); NASA/JPL-Caltech/UCLA 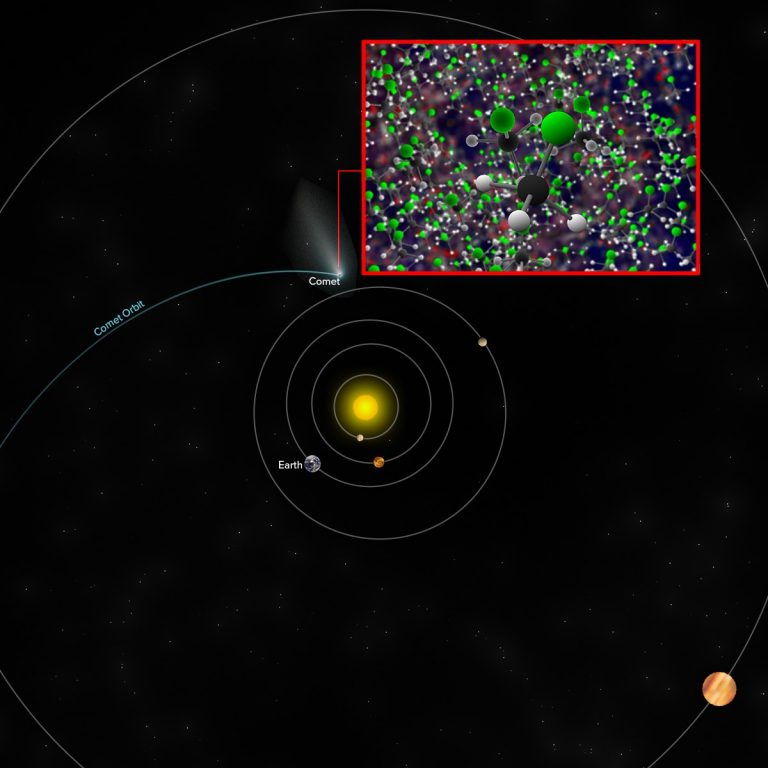 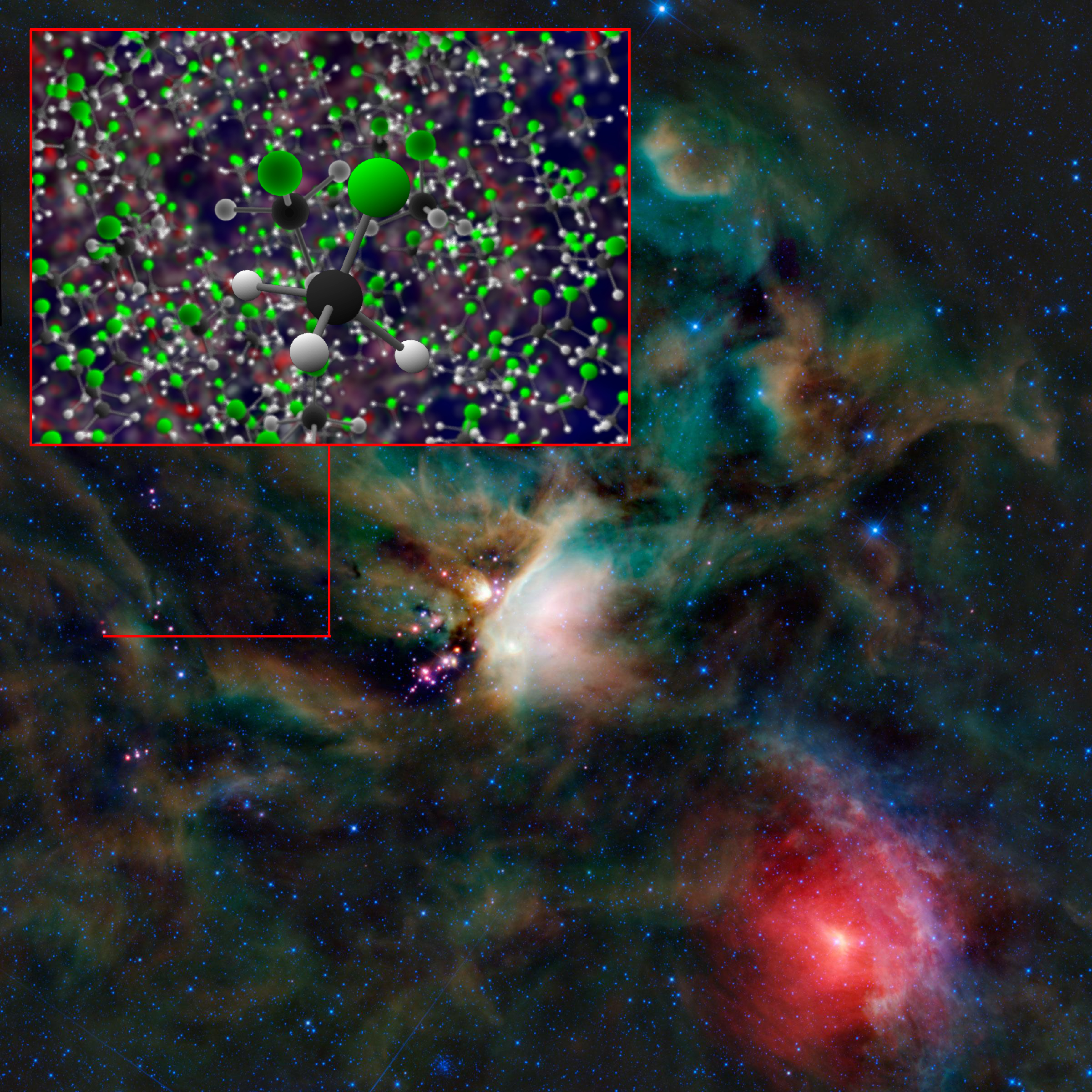 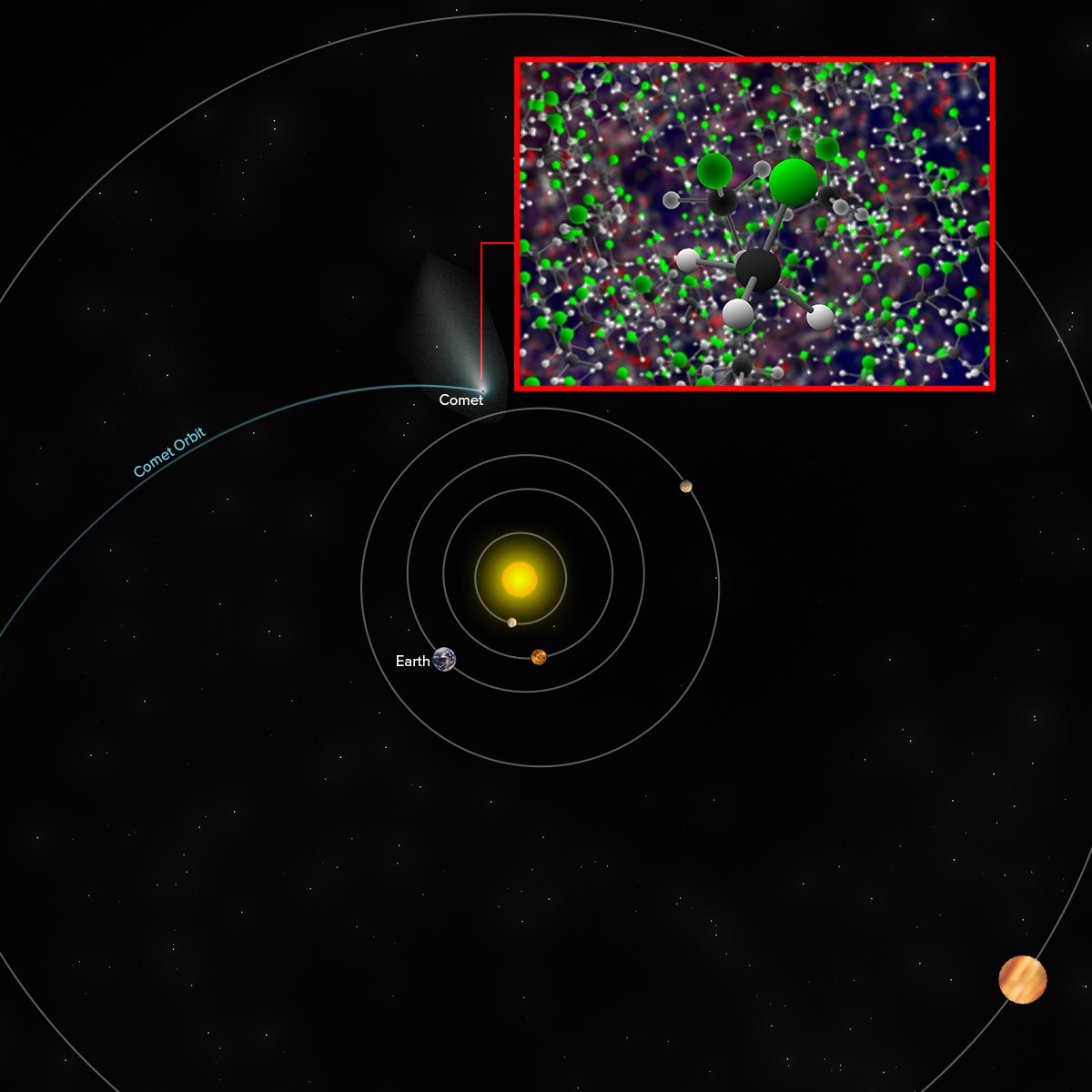