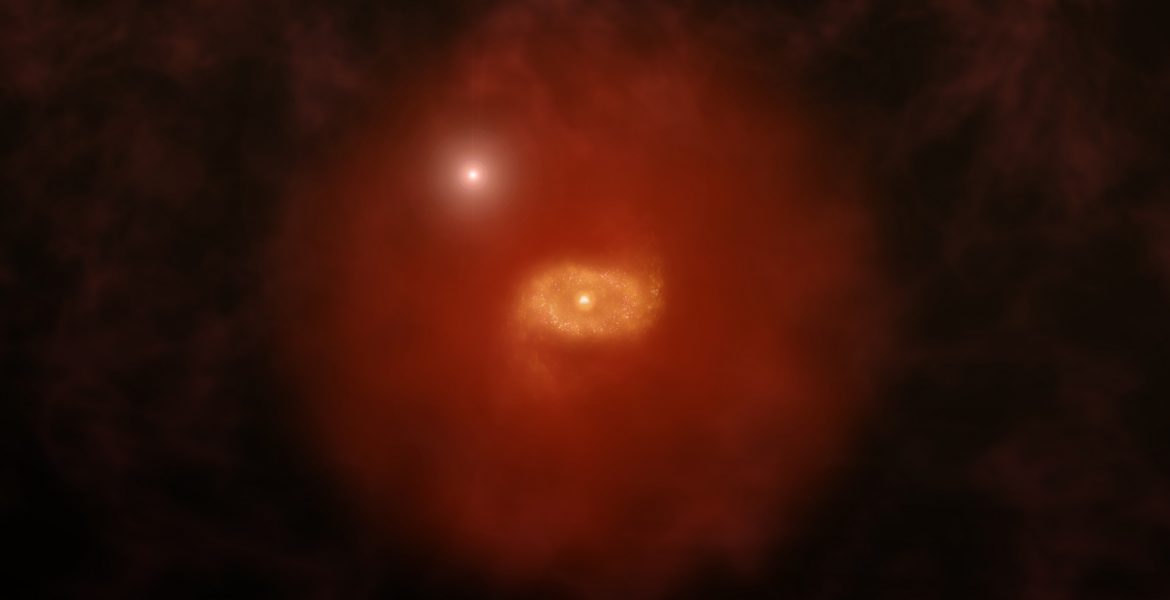 By harnessing the extreme sensitivity of the Atacama Large Millimeter/submillimeter Array (ALMA), astronomers have directly observed a pair of Milky Way-like galaxies seen when the universe was only eight percent of its current age. These progenitors of today’s giant spiral galaxies are surrounded by “super halos” of hydrogen gas that extend many tens of thousands of light-years beyond their dusty, star-filled disks.

Astronomers initially detected these galaxies by studying the intense light from even-more-distant quasars. As this light travels through an intervening galaxy on its way to Earth, it can pick up the unique spectral signature from the galaxy’s gas. This technique, however, normally prevents astronomers from seeing the actual light emitted by the galaxy, which is overwhelmed by the much brighter emission from the background quasar.

“Imagine a tiny firefly next to a high-power search light. That’s what astronomers are up against when it comes to observing these youthful versions of our home galaxy,” said Marcel Neeleman a postdoctoral fellow at the University of California, Santa Cruz, and lead author on a paper appearing in the journal Science. “We can now see the galaxies themselves, which gives us an amazing opportunity to learn about the earliest history of our own galaxy and others like it.”

With ALMA, the astronomers were finally able to observe the natural millimeter-wavelength “glow” emitted by ionized carbon in the dense and dusty star-forming regions of the galaxies. This carbon signature, however, is considerably offset from the gas first detected by quasar absorption. This extreme separation indicates that the galaxies’ gas content extends well beyond their star-filled disks, suggesting that each galaxy is embedded in a monstrous halo of hydrogen gas.

According to the researchers, the neutral hydrogen gas revealed by its absorption of quasar light is most likely part of a large halo or perhaps an extended disk of gas around the galaxy. “It’s not where the star formation is, and to see so much gas that far from the star-forming region means there is a large amount of neutral hydrogen around the galaxy,” Neeleman said.

“These galaxies appear to be massive, dusty, and rapidly star-forming systems, with large, extended layers of gas,” Prochaska said.

“ALMA has solved a decades-old question on galaxy formation,” said Chris Carilli, an astronomer with the National Radio Astronomy Observatory in Socorro, N.M., and co-author on the paper. “We now know that at least some very early galaxies have halos that are much more extended that previously considered, which may represent the future material for galaxy growth.”

This research is presented in a paper titled “[C II] 158-μm emission from the host galaxies of damped Lyman alpha systems,” by M. Neeleman et al., scheduled for publication in the journal Science on 24 March 2017. 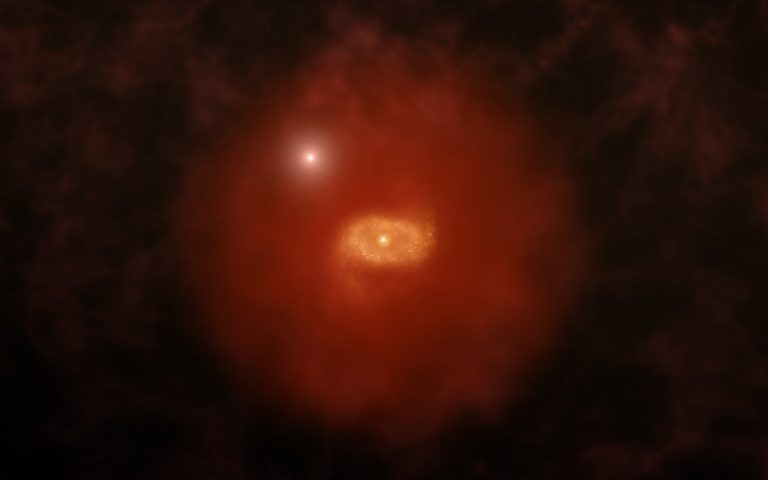 Artist impression of a progenitor of Milky Way-like galaxy in the early universe with a...Read More
Credit: Alexandra Angelich (NRAO/AUI/NSF) 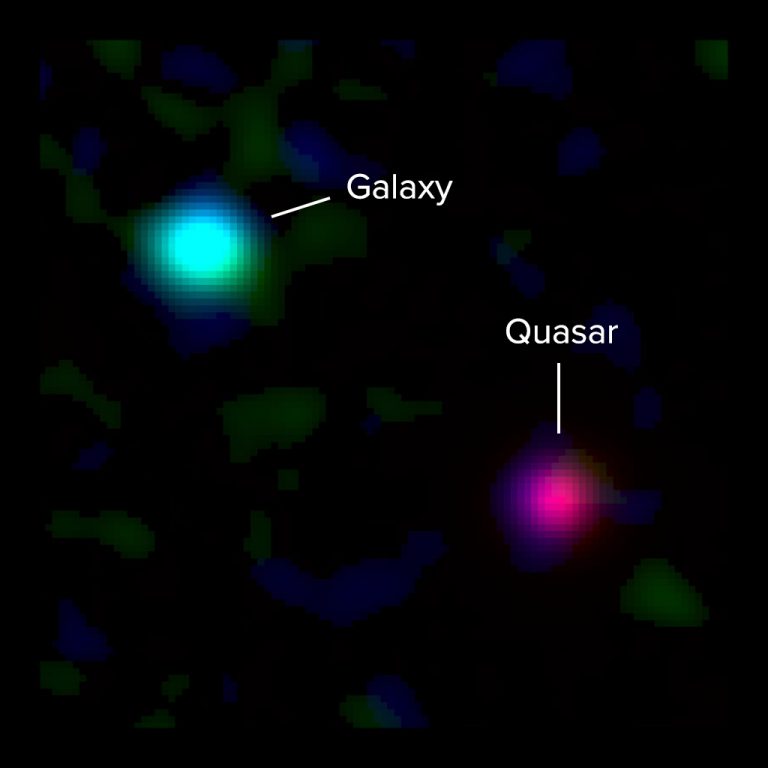 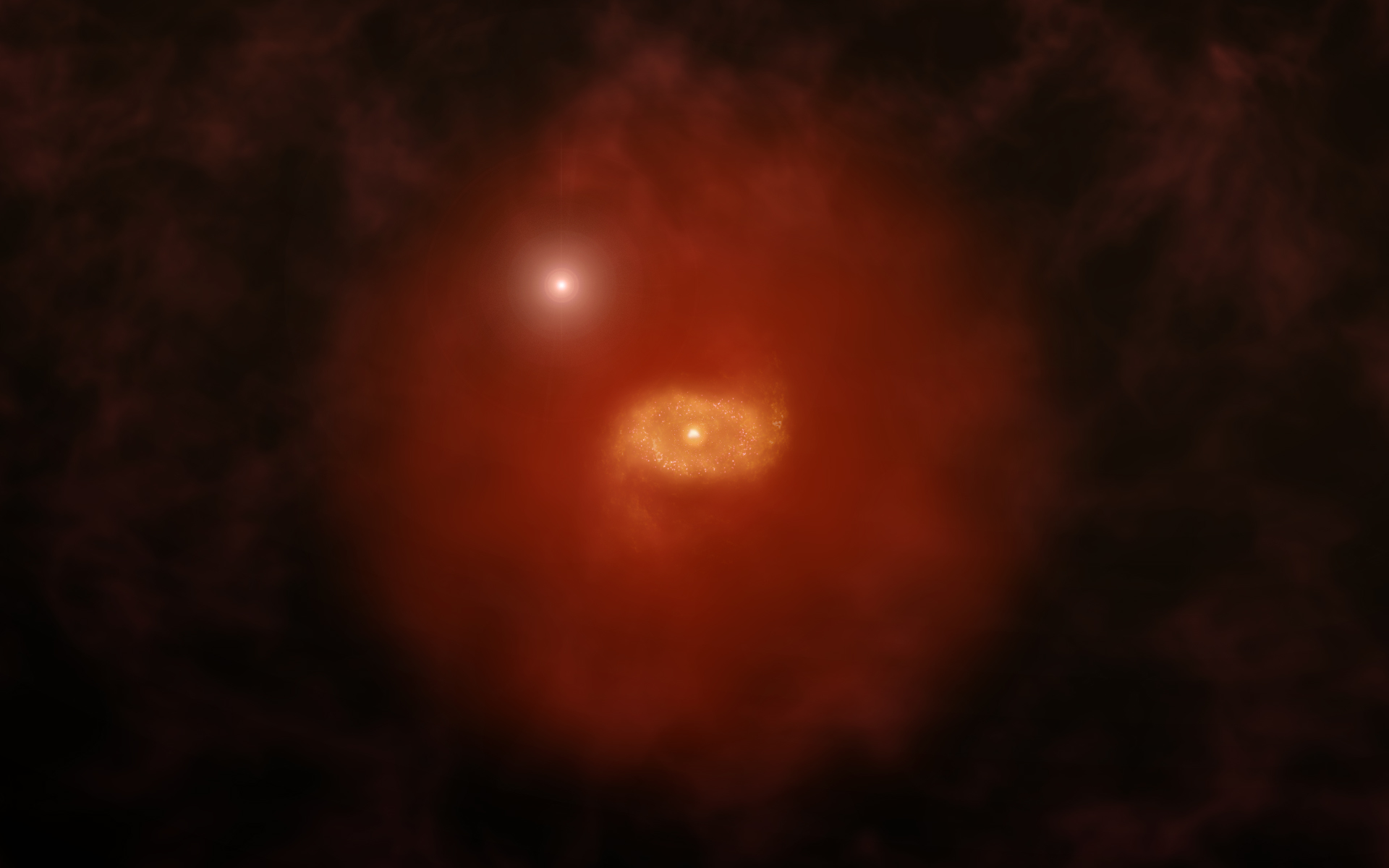 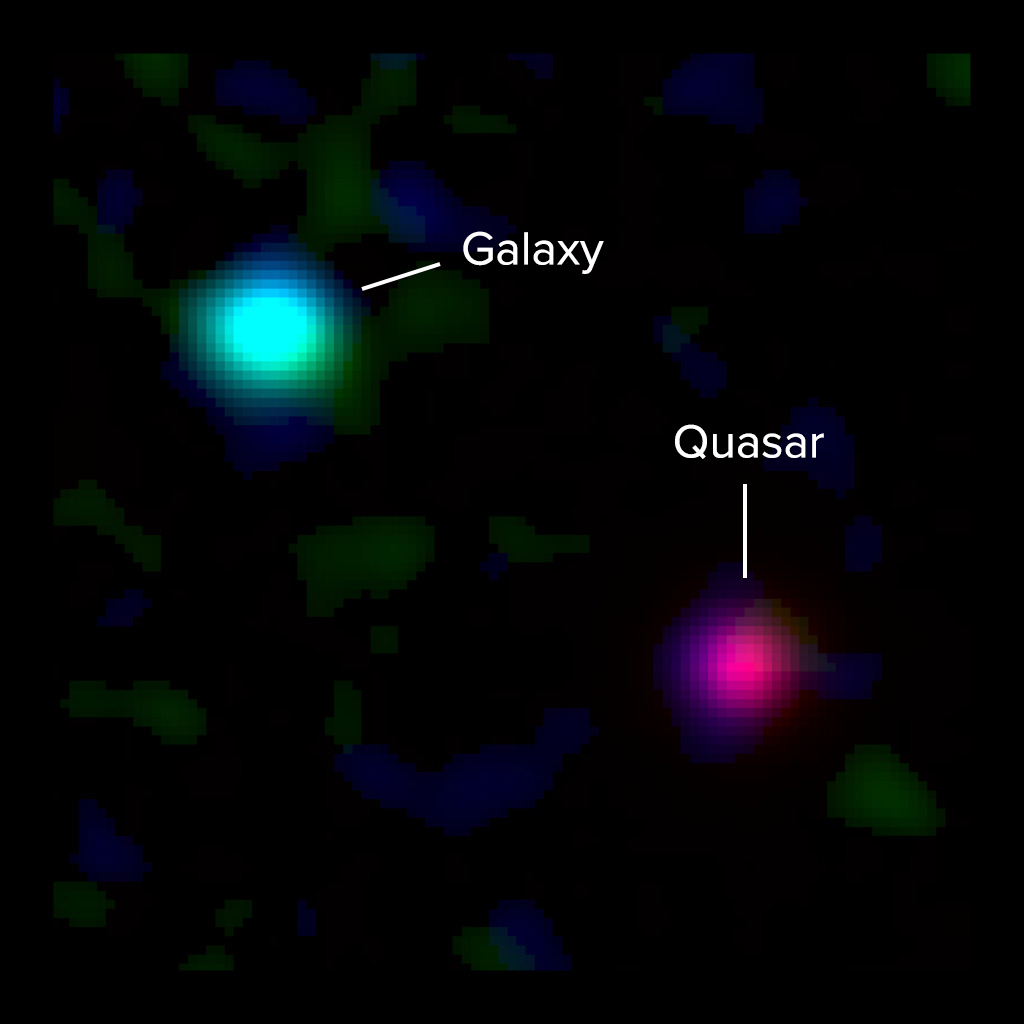