Summary: Astronomers have made the first definitive detection of a radioactive molecule in interstellar space: a form, or isotopologueIsotopologueIsotopologues are molecules that differ only in their isotopic composition. Simply, the isotopologue of a molecule has at least one atom with a different number of neutrons than the parent atom. of aluminum monofluoride (26AlF). The new data – made with ALMA and the NOEMA radio telescopes – reveal that this radioactive isotopologue was ejected into space by the collision of two stars, a tremendously rare cosmic event that was witnessed on Earth as a “new star,” or nova, in the year 1670.

When two Sun-like stars collide, the result can be a spectacular explosion and the formation of an entirely new star. One such event was seen from Earth in 1670. It appeared to observers as a bright, red “new star.” Though initially visible with the naked eye, this burst of cosmic light quickly faded and now requires powerful telescopes to see the remains of this merger: a dim central star surrounded by a halo of glowing material flowing away from it.

Approximately 348 years after this event, an international team of astronomers using the Atacama Large Millimeter/submillimeter Array (ALMA) and the NOEMA (Northern Extended Millimeter Array) radio telescopes studied the remains of this explosive stellar merger — known as CK Vulpeculae (CK Vul) — and discovered the clear and convincing signature of a radioactive version of aluminum (26Al, an atom with 13 protons and 13 neutron) bound with atoms of fluorine, forming 26-aluminum monofluoride (26AlF).

This is the first molecule bearing an unstable radioisotope definitively detected outside of our solar system. Unstable isotopes have an excess of nuclear energy and eventually decay into a stable, less-radioactive form. In this case, the 26-aluminum (26Al) decays to 26-magnesium (26Mg).

“The first solid detection of this kind of radioactive molecule is an important milestone in our exploration of the cool molecular universe,” said Tomasz Kamiński, an astronomer with the Harvard-Smithsonian Center for Astrophysics in Cambridge, Mass., and lead author on a paper appearing in Nature Astronomy.

The researchers detected the unique spectral signature of these molecules in the debris surrounding CK Vul, which is approximately 2,000 light-years from Earth. As these molecules spin and tumble through space, they emit a distinctive fingerprint of millimeter-wavelength light, a process known as “rotational transition.” Astronomers consider this the “gold standard” for molecular detections.

These characteristic molecular fingerprints are usually taken from laboratory experiments and then used to identify molecules in space. In the case of 26AlF, this method is not applicable because 26-aluminum is not present on Earth. Laboratory astrophysicists from the University of Kassel/Germany therefore used the fingerprint data of stable and abundant 27AlF molecules to derive accurate data for the rare 26AlF molecule. “This method of extrapolation is based on the so-called Dunham approach,” explained Alexander Breier from the Kassel team. “It allows researchers to precisely calculate the rotational transitions of 26AlF with an accuracy far beyond the needs of astronomical observers.”

The observation of this particular isotopologue provides fresh insights into the merger process that created CK Vul. It also demonstrates that the deep, dense inner layers of a star, where heavy elements and radioactive isotopes are forged, can be churned up and cast into space by stellar collisions. “We are observing the guts of a star torn apart three centuries ago by a collision,” observed Kamiński. “How cool is that?”

The astronomers also determined that the two stars that merged were relatively low-mass, with one being a red giant star with a mass somewhere between 0.8 and 2.5 times that of our Sun.

“This first direct observation of this isotope in a stellar-like object is also important in the broader context of galactic chemical evolution,” noted Kamiński. “This is the first time an active producer of the radioactive nuclide 26Al has been directly observationally identified.”

It has been known for decades that there is about three entire Suns’ worth of 26Al spread across the Milky Way. But these observations, made at gamma-ray wavelengths, could only identify that the signal was there; they couldn’t pinpoint individual sources and it was unclear how the isotopes got there.

With current estimates on the mass of 26Al in CK Vul (about a quarter the mass of Pluto) and the rare occurrence of mergers such as this, it seems rather unlikely that mergers are solely responsible for this galactic radioactive material, the astronomers conclude.

However, ALMA and NOEMA can only detect the amount of 26Al bound with fluorine. The actual mass of 26Al in CK Vul (in atomic form) may be much greater. It is also possible that other merger remnants may have far greater amounts. Astronomers may also have underestimated the current merger rates in the Milky Way. “So this is not a closed issue and the role of mergers may be non-negligible,” speculated Kamiński.

The discovery involved the following telescopes/facilities: APEX, IRAM 30m, NOEMA, ALMA, and SMA. The most relevant observations were done with the PdBI/NOEMA interferometer and with the ALMA array, including its newly commissioned band 5 receiver. NOEMA is operated by the Institute for Radio Astronomy at Millimeter Wavelengths (IRAM). 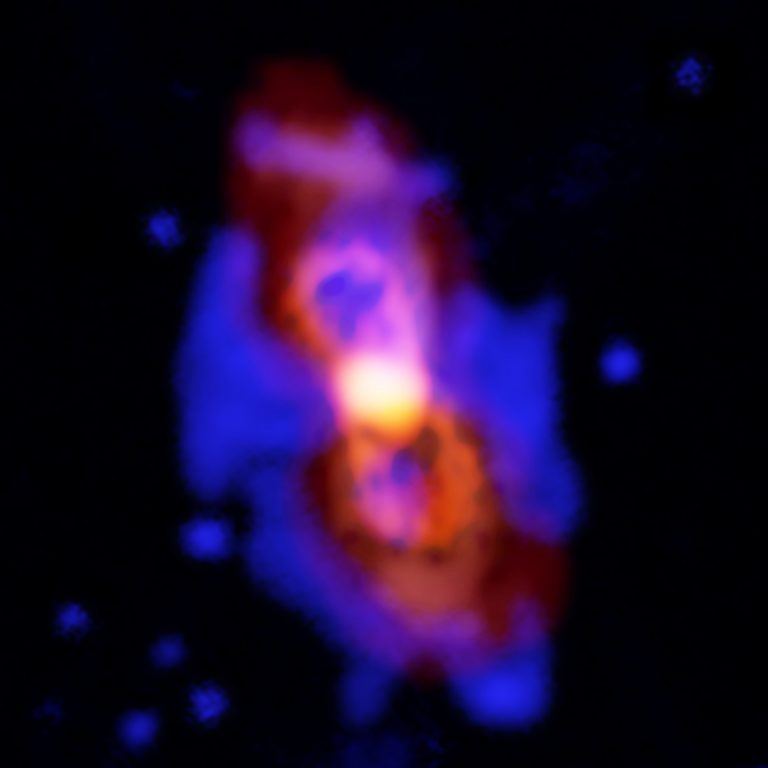 Artist impression of the collision of two stars, like the ones that formed CK Vul....Read More
Credit: NRAO/AUI/NSF; S. Dagnello 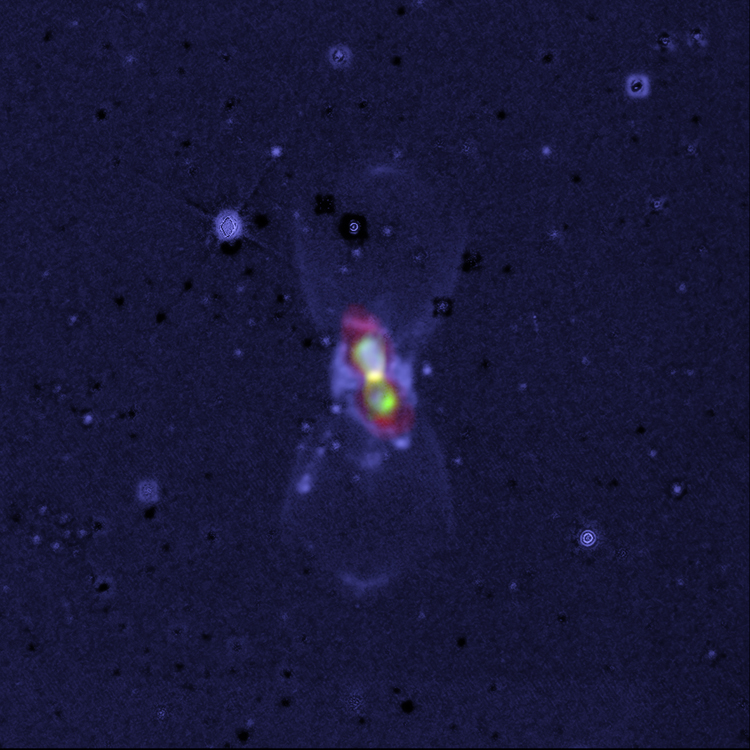 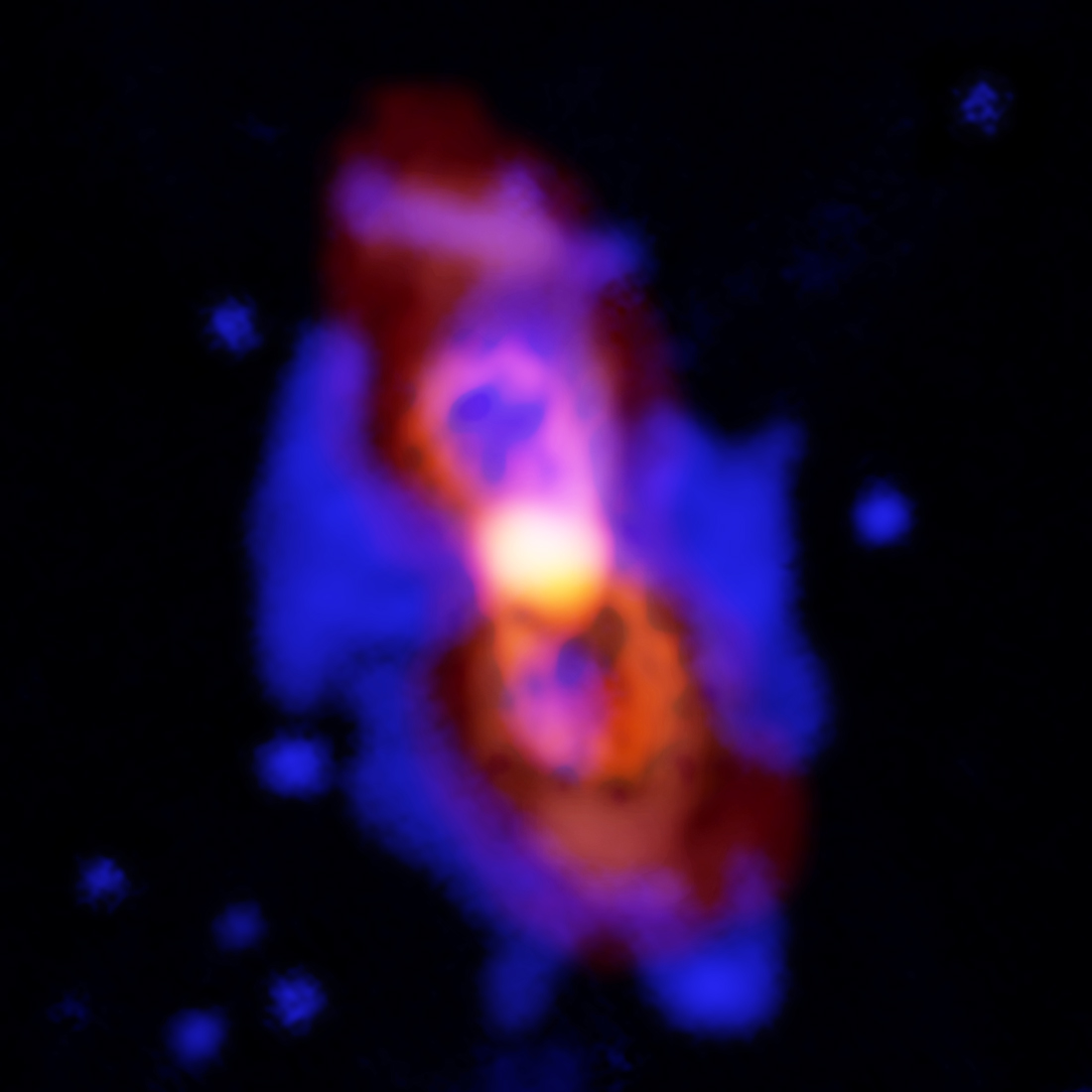