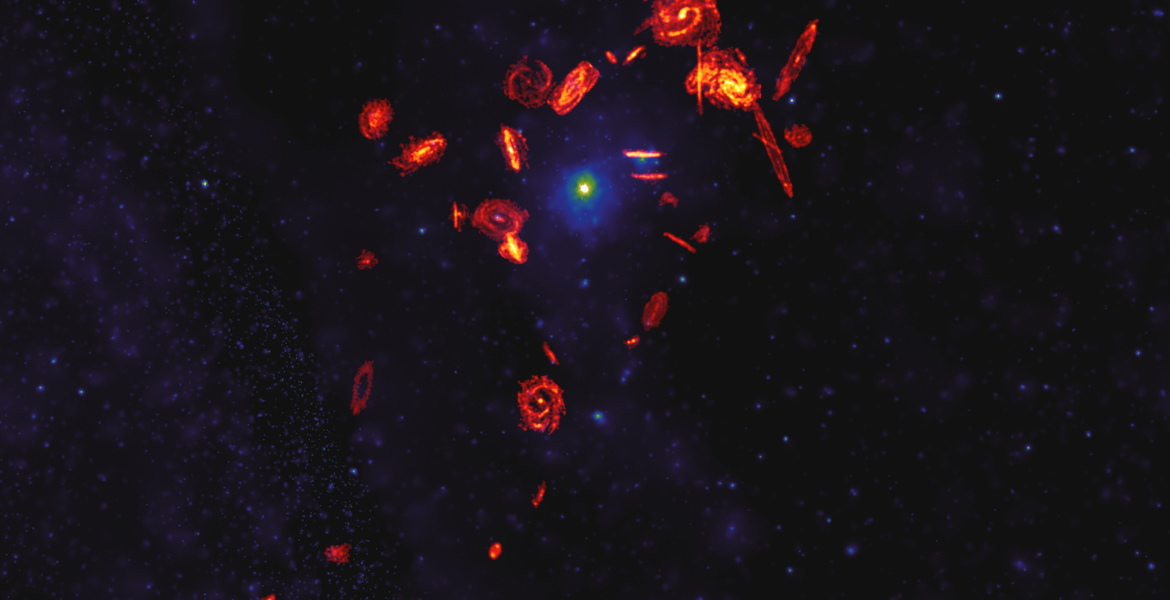 Astronomers examining the nearby Universe with the help of the Atacama Large Millimeter/submillimeter Array (ALMA) have just completed the largest high-resolution survey of star-forming fuel ever conducted in galaxy clusters. But more importantly, they’re tackling a long-standing mystery in astrophysics: what’s killing galaxies? The research, which provides the clearest evidence to date that extreme environments in space have severe impacts on the galaxies within them, will be published in an upcoming edition of The Astrophysical Journal Supplement Series.

The Virgo Environment Traced in Carbon Monoxide Survey—VERTICO—set out to better understand star formation and the role of galaxies in the Universe. “We know that galaxies are being killed by their environments, and we want to know why,” said Toby Brown, Plaskett Fellow at the National Research Council of Canada and lead author on the paper. “What VERTICO reveals better than ever before is which physical processes affect molecular gas and how they dictate the life and death of the galaxy.”

Galaxies are large collections of stars, and their births, evolutions, and deaths are influenced by where they live in the Universe and how they interact with their surroundings. Galaxy clusters, in particular, are some of the most extreme environments in the Universe, making them of particular interest to scientists studying the evolution of galaxies.

Home to thousands of galaxies the Virgo Cluster is the nearest massive cluster of galaxies to the Local Group, where the Milky Way resides. The extreme size and proximity make the cluster easy to study, but it also has other features that make it ripe for observation. “The Virgo Cluster is a bit unusual in that it has a relatively large population of galaxies that are still forming stars,” said Christine Wilson, Distinguished University Professor at McMaster University and co-principal investigator on the VERTICO project. “Many galaxy clusters in the Universe are dominated by red galaxies with little gas and star formation.”

The VERTICO project observed the gas reservoirs of 51 galaxies in the Virgo Cluster in high-resolution, revealing an environment so extreme and inhospitable that it can stop entire galaxies from forming stars in a process known as galaxy quenching. “The Virgo Cluster is the most extreme region of the local Universe, filled with million-degree plasma, extreme galaxy speeds, violent interactions between galaxies and their surroundings, a galaxy retirement village, and accordingly, a galaxy graveyard,” said Brown, adding that the project revealed how gas stripping can stunt, or shut down, one of the most important physical processes in the Universe: star formation. “Gas stripping is one of the most spectacular and violent external mechanisms that can shut down star formation in galaxies,” said Brown. “Gas stripping occurs when galaxies are moving so fast through hot plasma in the cluster that vast quantities of cold molecular gas are stripped away from the galaxy, as though the gas is being swept away by a huge cosmic broom. The exquisite quality of VERTICO’s observations allows us to better see and understand such mechanisms.”

The project was aided by ALMA’s Band 6 receiver—developed at the National Radio Astronomy Observatory’s Central Development Laboratory (CDL)—which provides high sensitivity and high resolution while minimizing required observing time. That, in turn, led to the collection of a significant amount of data, which may contain the clues needed to solve the remaining mysteries of how environments impact galaxies, and accordingly, how galaxies die. Wilson said, “There have been a lot of questions over the years on whether and how the cluster environment affects the molecular gas in galaxies, and how exactly those environments may contribute to their deaths. We still have work to do, but I’m confident VERTICO will allow us to answer these questions once and for all.”

The new paper is the first from VERTICO, with additional research expected to publish in the near future. 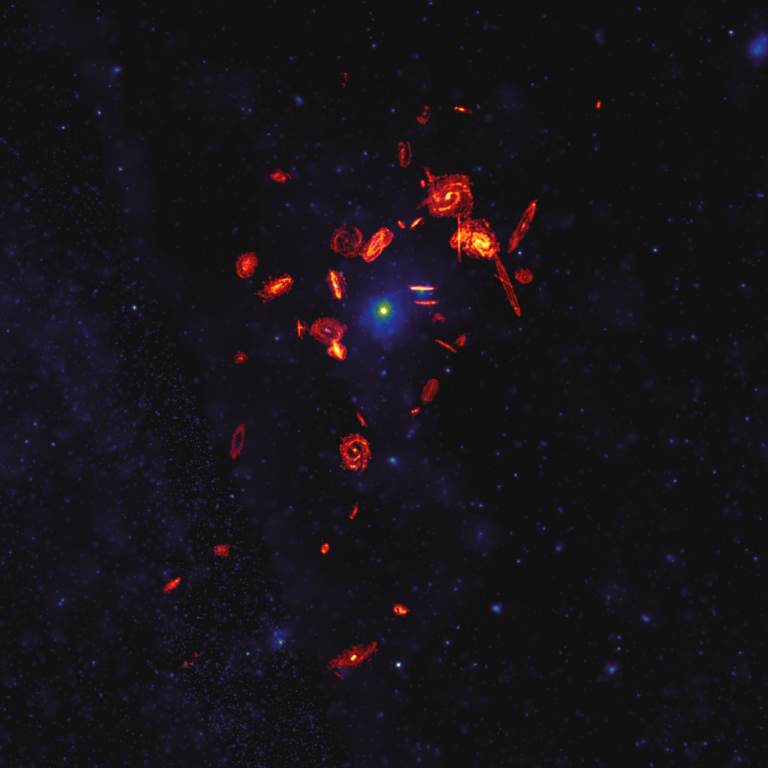 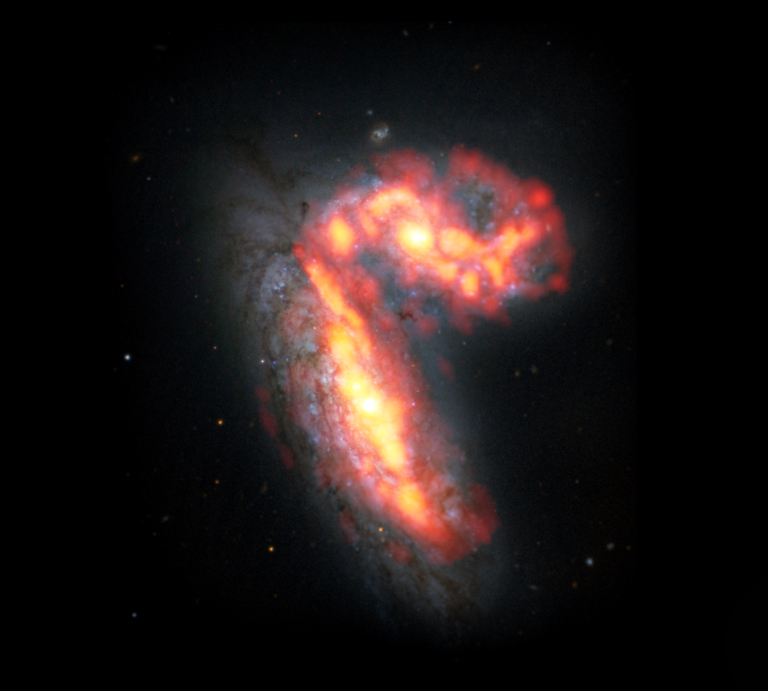 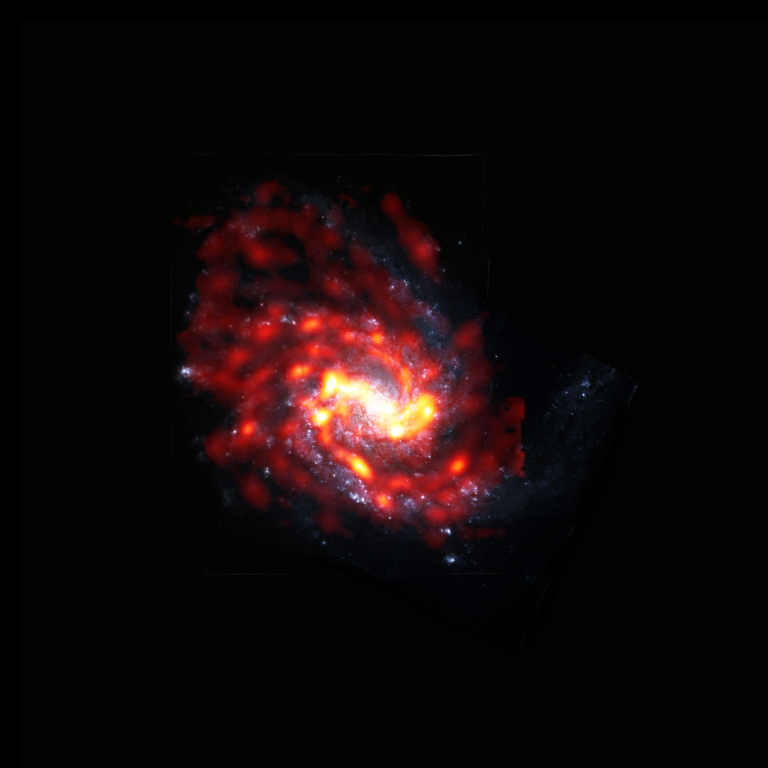 Spiral galaxy NGC 4254 is among the thousands of galaxies living and dying by the...Read More
Credit: ALMA (ESO/NAOJ/NRAO)/S. Dagnello (NRAO) 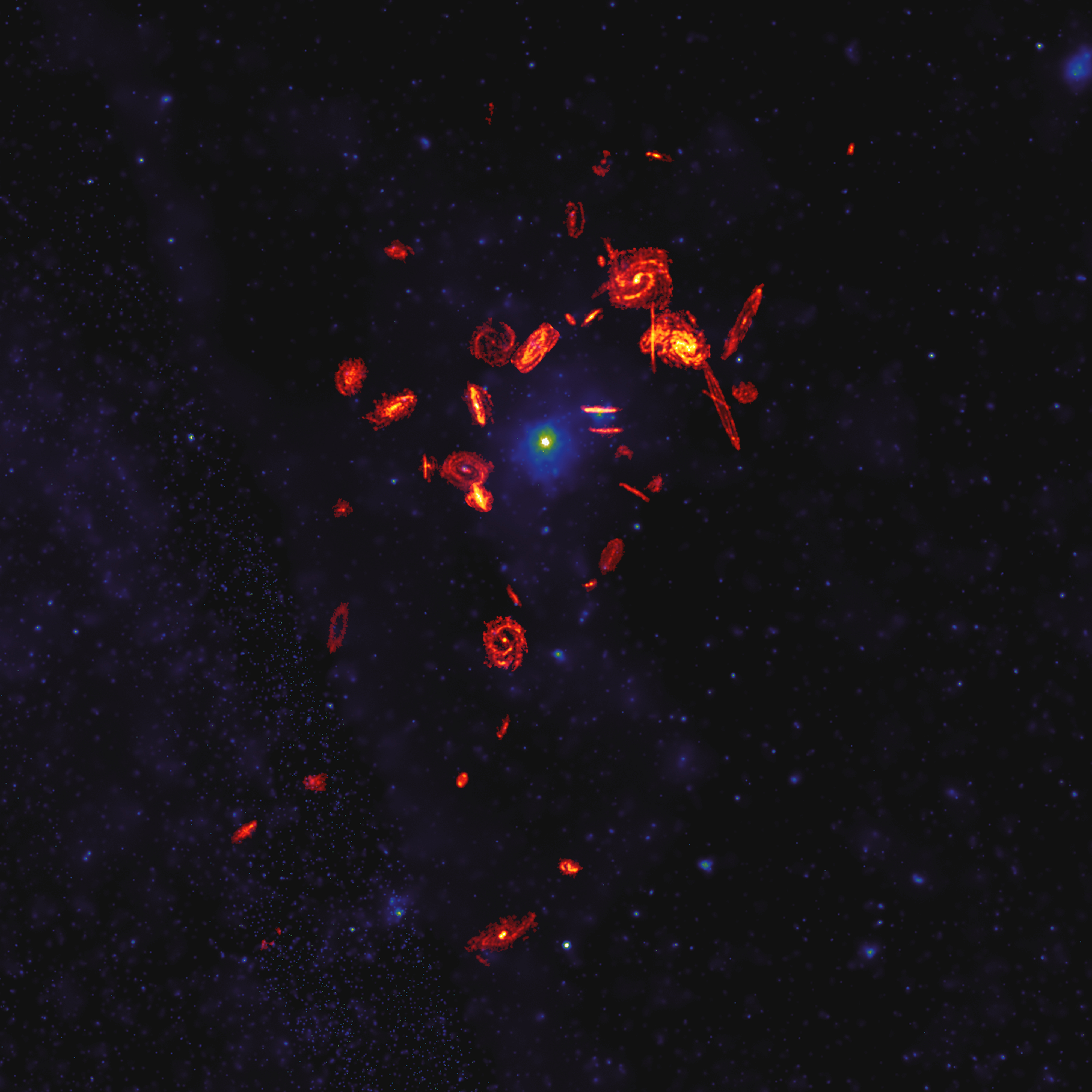 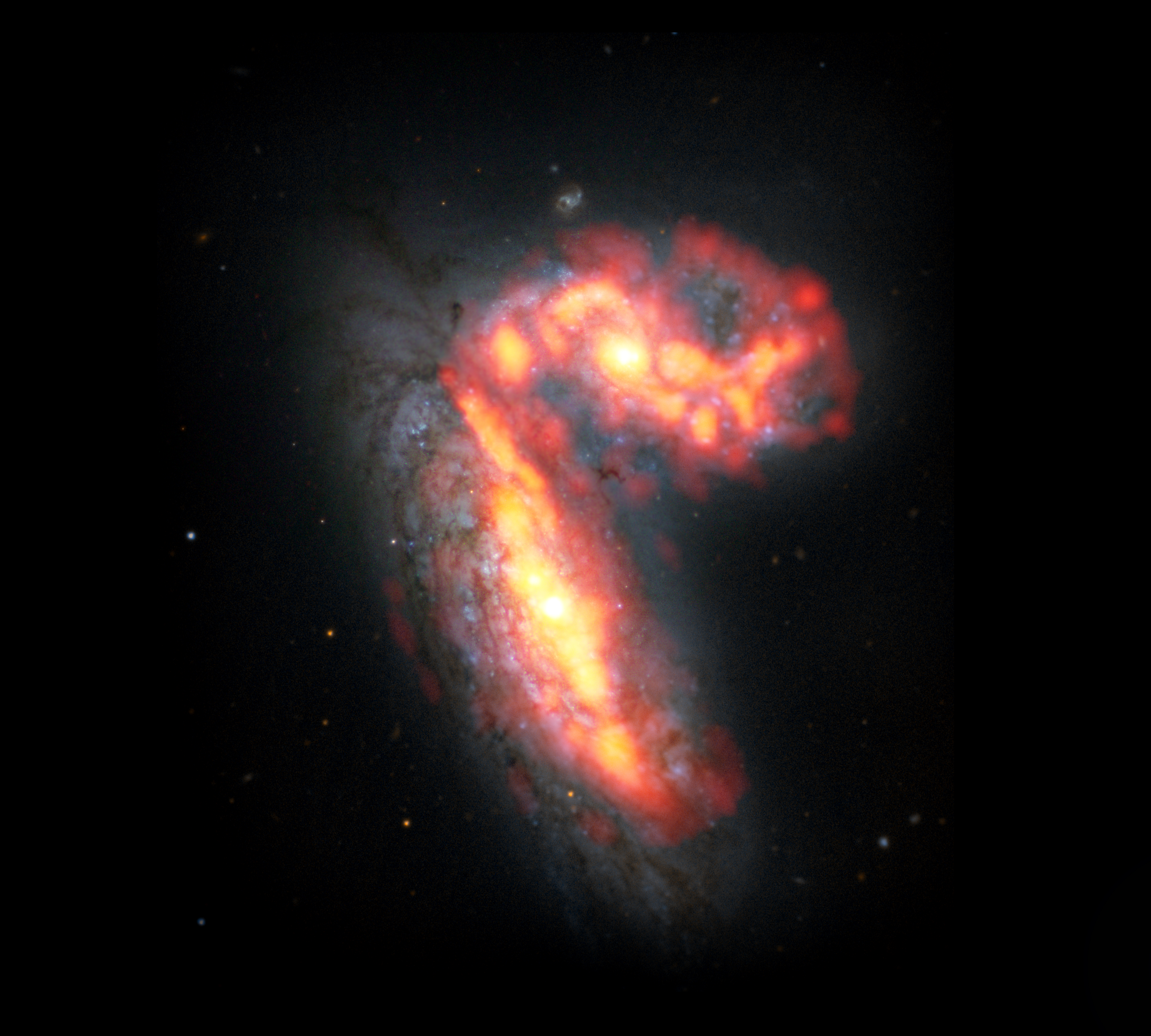 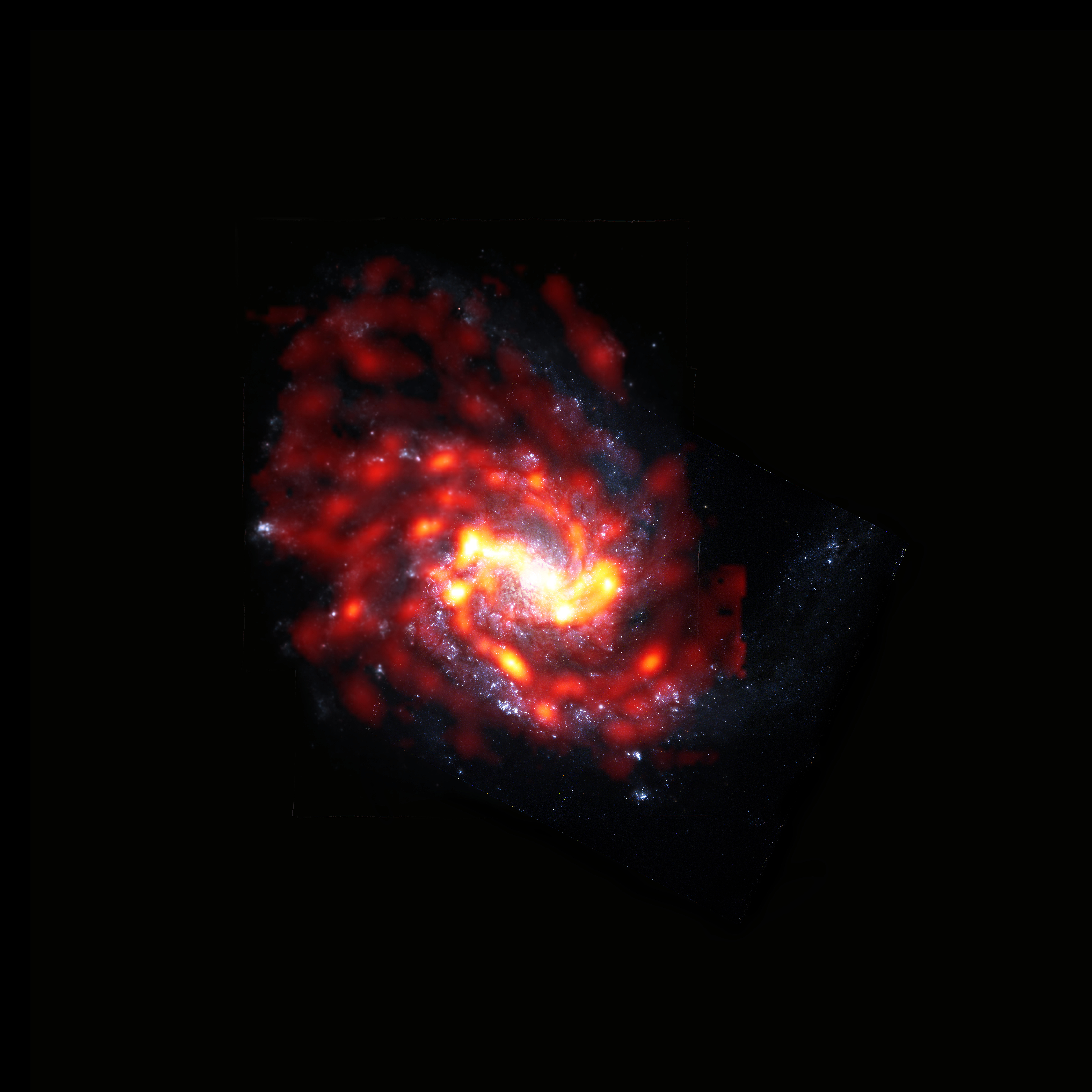