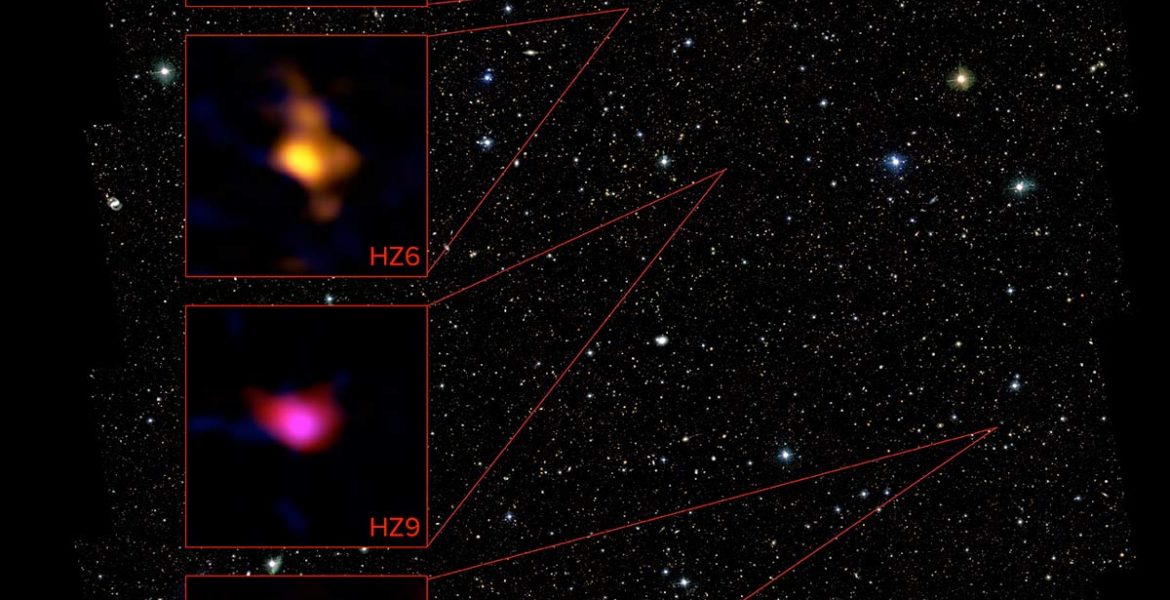 Astronomers study the elements scattered between the stars to learn about the internal workings of galaxies, their motion and chemistry. To date, however, attempts to detect the telltale radio signature of carbon in the very early Universe have been thwarted, perhaps – as some have speculated – by the need to allow a few billion years more for stars to manufacture sufficient quantities to be observed across such vast cosmic distances.

New observations with the Atacama Large Millimeter/submillimeter Array (ALMA), however, readily detected the first faint traces of carbon atoms permeating the interstellar atmospheres of so-called normal galaxies, seen only one billion years after the Big Bang. This suggests that even though normal galaxies in the very early Universe were already brimming with carbon, they were not nearly as chemically evolved as similar galaxies observed just a few billion years later. In these later galaxies most of the ionized carbon has condensed into dust grains — simple organic molecules like carbon monoxide (CO).

“Astronomers are trying to better understand how we went from the primordial gas of the Big Bang to the heavy atoms and complex molecules we see in galaxies throughout the Universe today,” said Peter Capak, an astronomer with the California Institute of Technology in Pasadena and lead author on a study appearing in the journal Nature. “Before ALMA, there was no way to directly sample these very young, very distant galaxies because any radio emission from carbon would have simply been too weak to detect.”

ALMA, with its unprecedented sensitivity, was able to detect the faint millimeter “glow” of ionized carbon in the interstellar atmospheres of nine very distant, very young galaxies seen when the Universe was only seven percent of its current age. Atoms like carbon can become ionized by the powerful ultraviolet radiation emitted by bright, massive stars.

When galaxies first assembled, during a period often referred to as “Cosmic Dawn,” most of the space between the stars was filled with a mixture of hydrogen and helium produced in the Big Bang. As subsequent generations of massive stars ended their brief but brilliant lives as supernovas, they seeded the interstellar medium with a fine dust of heavy elements, mostly carbon, silicon, and oxygen, which are forged in their nuclear furnaces.

“The particular spectral signature of ionized carbon has long been considered a potentially powerful tool to study the enrichment of galaxies with elements heavier than hydrogen and helium. It’s also a unique probe of early galaxy dynamics,” said co-author Chris Carilli with the National Radio Astronomy Observatory in Socorro, N.M. “The results from this paper clearly demonstrate this potential and portend a great future for these kinds of studies.”

Since carbon has an affinity for other elements, binding to make simple and complex organic molecules, it doesn’t remain in an unbound, ionized state for very long. It is therefore typically found in much lower concentrations when compared with other heavy elements in the interstellar medium.

This makes ionized carbon an excellent tracer of relatively young unevolved galaxies. “The fact that we see carbon in this peculiar state reveals that the concentrations of other heavier elements in the interstellar medium are relatively low,” said Capak. “This is in stark contrast to galaxies just two billion years later, which are teeming with a dust of heavy elements and present a much lower concentration of ionized carbon.”

The astronomers also used the data in these same observations as an intergalactic speed camera, and were able to clock the interstellar gas in these galaxies careening up to 380 kilometers per second. “This is a measurement that was previously impossible for such distant galaxies,” noted Capak. “It opens up a new window into understanding how the first galaxies assembled and evolved.”

The velocities observed by ALMA are similar to those seen in normal, star-forming galaxies a few billion years later and even today in the nearby Universe. The ALMA data also show that the mass of each of these distant galaxies is between 10-100 billion times the mass of the Sun, which is comparable to the mass of the Milky Way.

These results surprised astronomers because they had assumed normal galaxies in the early Universe would be less energetic and have lower masses than those observed at later epochs.

Instead, the ALMA data reveal that the early Universe was capable of creating what we now consider to be normal-size galaxies. The difference in chemistry and the conspicuous lack of dust, however, indicate that they are in a very immature stage of evolution.

For their research, the astronomers selected nine typical star-forming galaxies about 13 billion light-years away. The galaxies were selected from the Cosmic Evolution Survey (COSMOS) and their distances were determined with the Deep Extragalactic Imaging Multi-Object Spectrograph (DEIMOS) on the W. M. Keck-II Observatory in Hawaii.

ALMA, located in the Atacama Desert of Chile, is able to detect the faint millimeter-wavelength radiation emitted by atoms and molecules in space. Earlier studies of galaxies at this extreme distance failed to detect this same signature because they focused on atypical galaxies undergoing merger, which may have masked the faint signal from ionized carbon. The new ALMA observations, which were achieved with only a portion of the array in less than 20 minutes of observations on each source, offer promise that subsequent observations with ALMA’s full complement of antennas will present an even clearer picture of the assembly of galaxies and their chemical compositions. 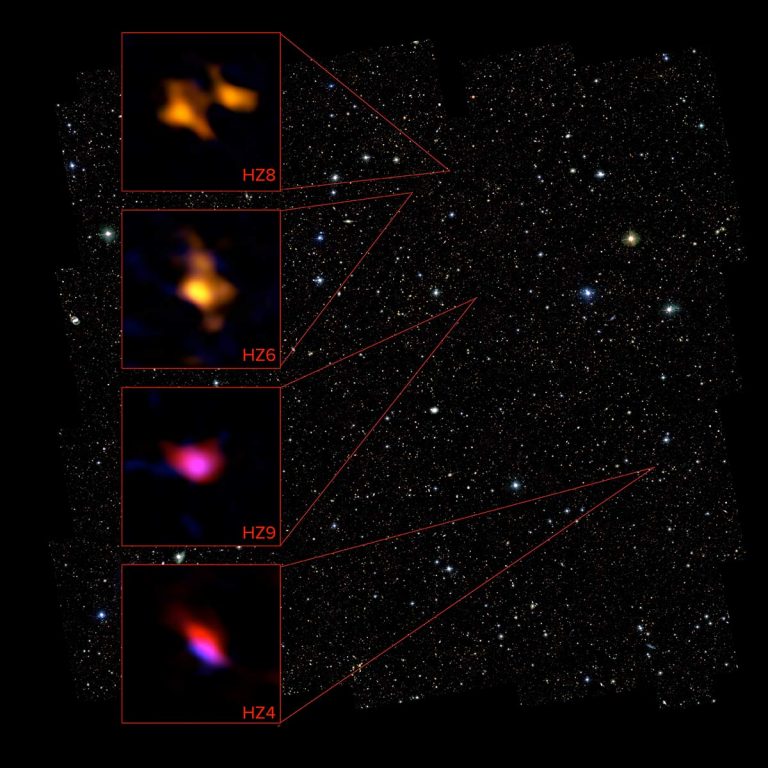 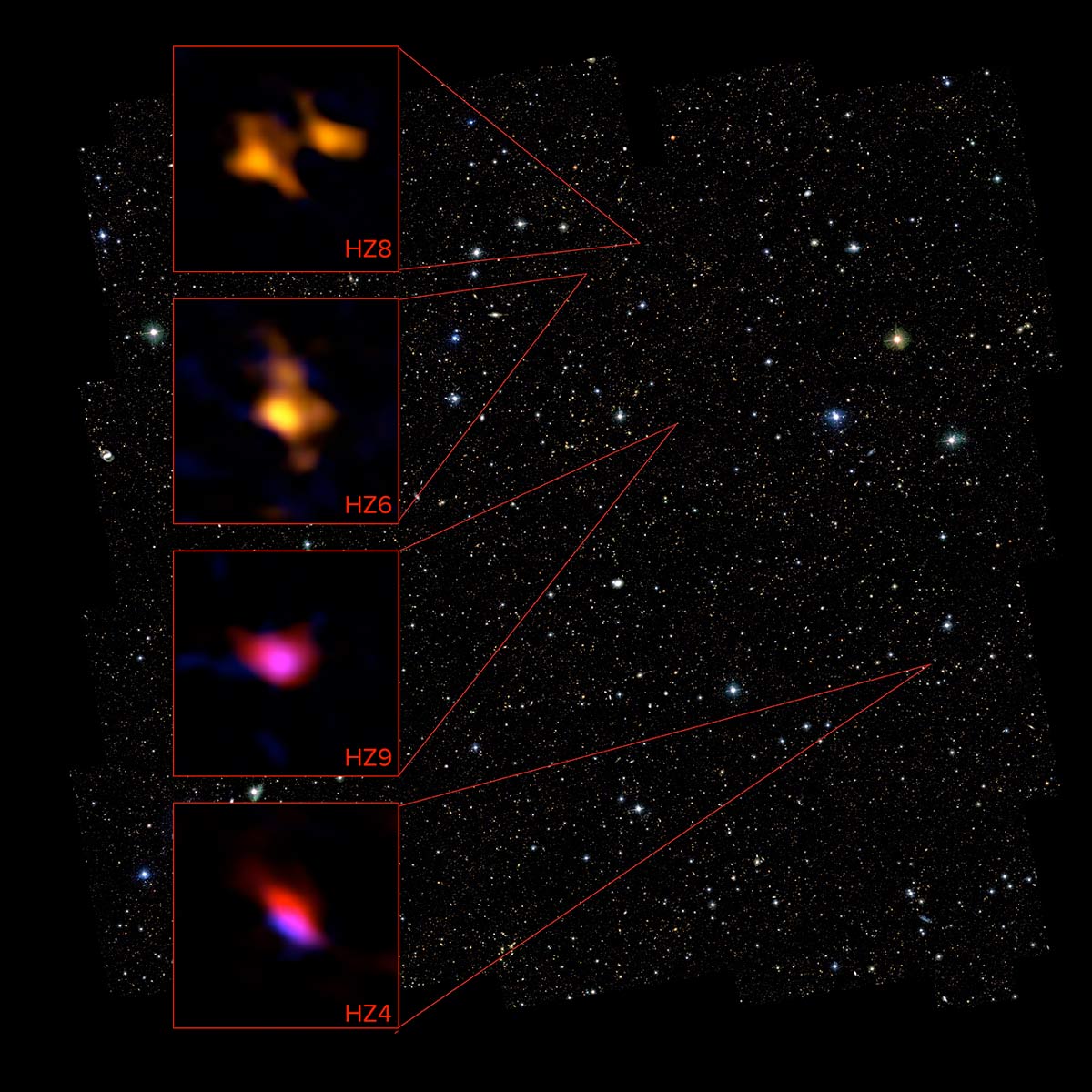