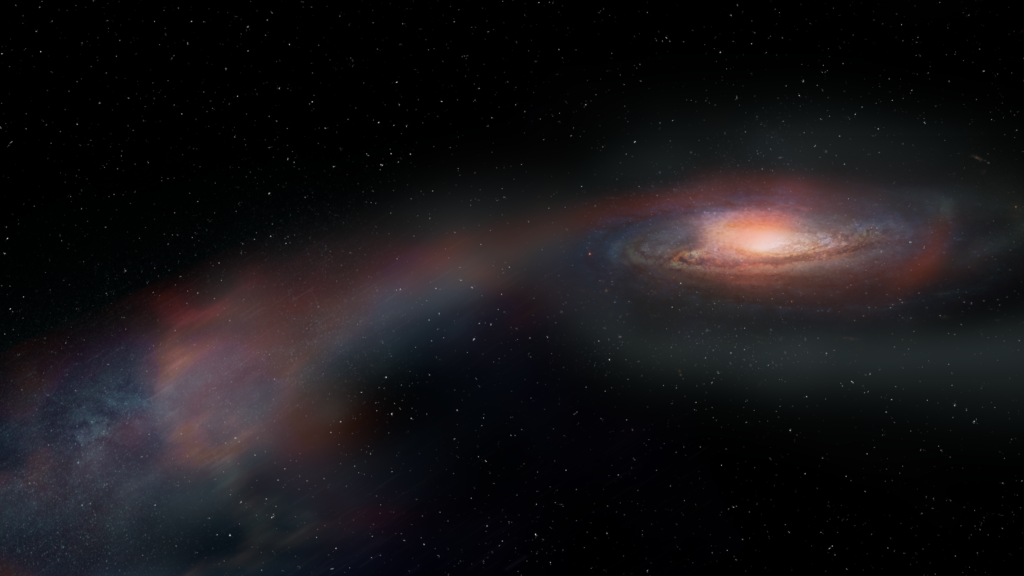 While observing a newly-dormant galaxy using the Atacama Large Millimeter/submillimeter Array (ALMA) and the Hubble Space Telescope (HST), scientists discovered that it had stopped forming stars not because it had used up all of its gas but because most of its star-forming fuel had been thrown out of the system as it merged with another galaxy. The result is a first for ALMA scientists. What’s more, if proven common, the results could change the way scientists think about galaxy mergers and deaths. The results of the research are published in The Astrophysical Journal Letters.

As galaxies move through the Universe, they sometimes encounter other galaxies. As they interact, each galaxy’s gravity pulls on the other. The ensuing tug-of-war flings gas and stars away from the galaxies, leaving behind streams of material known as tidal tails.

And that’s just what scientists believe happened to SDSS J1448+1010, but with a plot twist. The massive galaxy, which was born when the Universe was about half its current age, has nearly completed merging with another galaxy. During observations with the HST and ALMA— an international collaboration in which the U.S. National Science Foundation’s National Radio Astronomy Observatory (NRAO) is a partner— scientists discovered tidal tails containing roughly half of the entire system’s cold, star-forming gas. The discovery of the forcefully discarded material— equal to 10 billion times the mass of Earth’s Sun— was an indication that the merger may be responsible for snuffing out star formation, and that’s something scientists didn’t expect.

“What initially made this massive galaxy interesting was that, for some reason, it suddenly stopped forming stars about 70 million years ago immediately following a burst of star-forming activity. Most galaxies are happy to just keep forming stars,” said Justin Spilker, an astronomer at Texas A&M University and the lead author of the paper. “Our observations with ALMA and Hubble proved that the real reason the galaxy stopped forming stars is that the merger process ejected about half the gas fuel for star formation into intergalactic space. With no fuel, the galaxy couldn’t keep forming stars.”

The discovery is shedding light on the processes by which galaxies live or die, and helping scientists to better understand their evolution.

“When we look out at the Universe, we see some galaxies that are actively forming new stars, like our own Milky Way, and some that aren’t. But those ‘dead’ galaxies have many old stars in them, so they must have formed all of those stars at some point and then stopped making new ones,” said Wren Suess, a cosmology fellow at the University of California Santa Cruz and a co-author of the paper. “We still don’t yet understand all of the processes that make galaxies stop forming stars, but this discovery shows just how powerful these major galaxy mergers are, and how much they can affect how a galaxy grows and changes over time.”

Because the new result is from a single observation, it is currently unclear just how common this tug-of-war and its resultant quiescence may be. However, the discovery challenges long-held theories about exactly how star formation stops and galaxies die and has provided scientists with an exciting new challenge: to find more examples.

“While it’s pretty clear from this system that cold gas really can end up way outside of a merger system that shuts off a galaxy, the sample size of one galaxy tells us very little about how common this process is,” said David Setton, a graduate student in the department of physics and astronomy at the University of Pittsburgh and a co-author of the paper. “But, there are many galaxies out there like J1448+1010 that we’re able to catch right in the middle of those crashes and study exactly what happens to them when they go through that stage. The ejection of cold gas is an exciting new piece of the quiescence puzzle, and we’re excited to try to find more examples of this.”

Spilker added, “Astronomers used to think that the only way to make galaxies stop forming stars was through really violent, fast processes, like a bunch of supernovae exploding in the galaxy to blow most of the gas out of the galaxy and heat up the rest. Our new observations show that it doesn’t take a ‘flashy’ process to cut off star formation. The much slower merging process can also put an end to star formation and galaxies.” 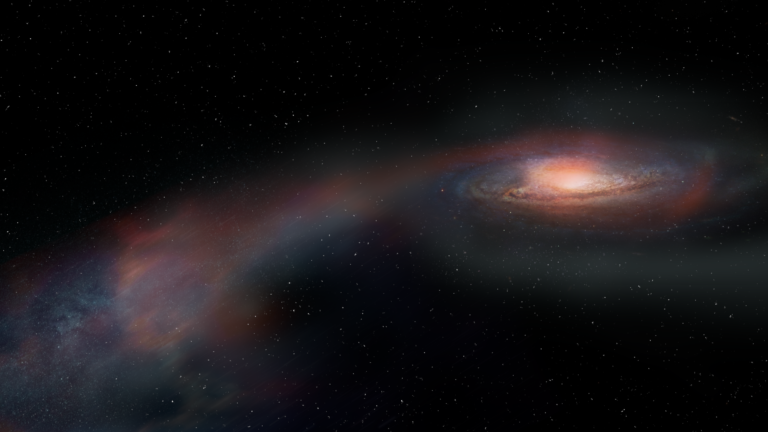 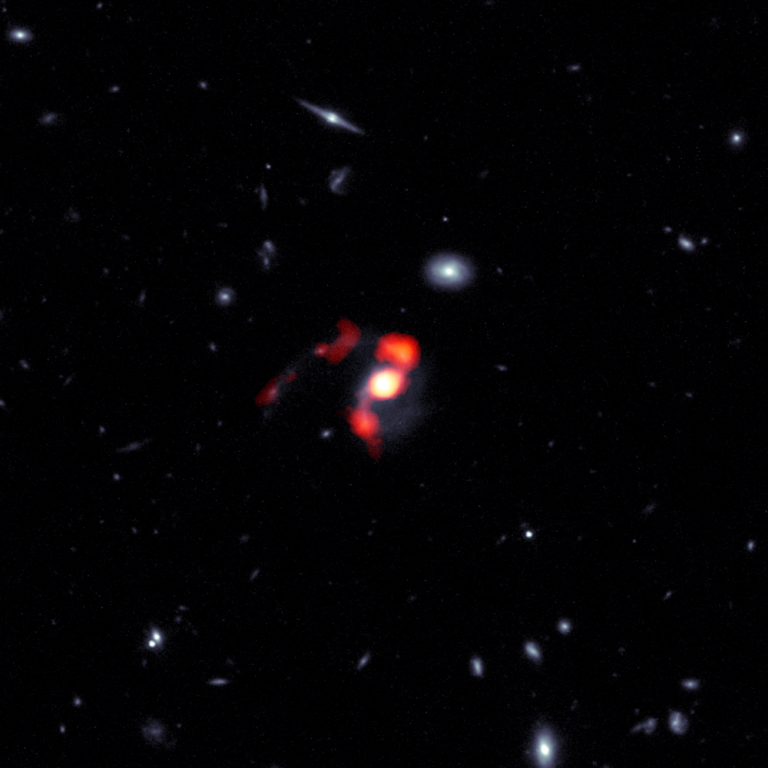 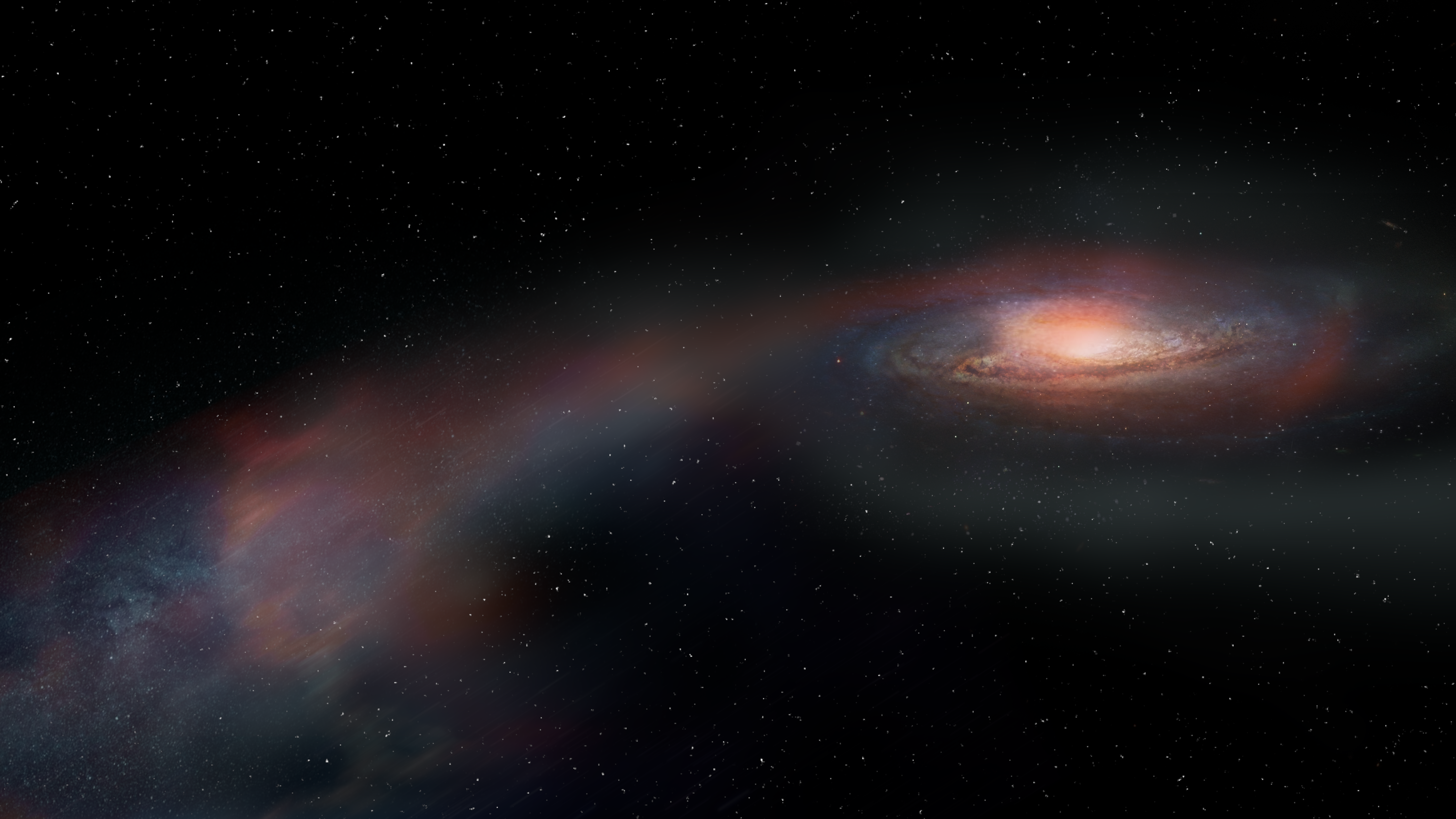 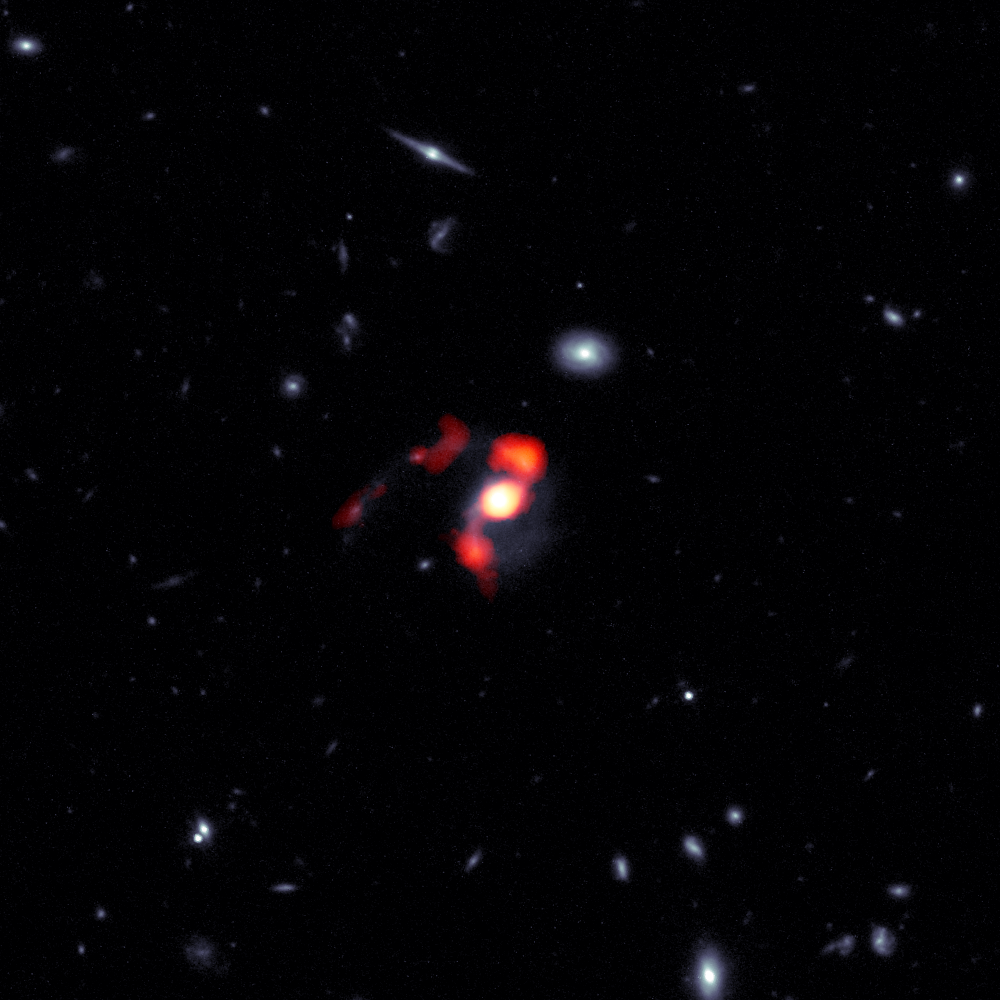