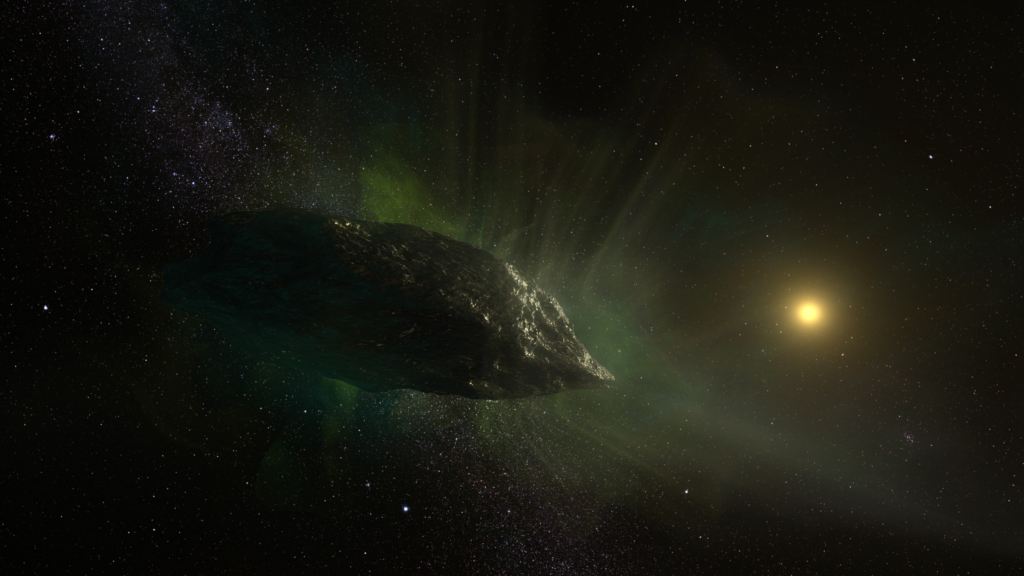 A galactic visitor entered our solar system last year – interstellar comet 2I/Borisov. When astronomers pointed the Atacama Large Millimeter/submillimeter Array (ALMA)Atacama Large Millimeter/submillimeter Array (ALMA)Funded by the U.S. National Science Foundation and its international partners (NRAO/ESO/NAOJ), ALMA is among the most complex and powerful astronomical observatories on Earth or in space. The telescope is an array of 66 high-precision dish antennas in northern Chile. toward the comet on 15 and 16 December 2019, for the first time they directly observed the chemicals stored inside an object from a planetary system other than our own. This research is published online on 20 April 2020 in the journal Nature Astronomy.

The ALMA observations from a team of international scientists led by Martin Cordiner and Stefanie Milam at NASA’s Goddard Space Flight Center in Greenbelt, Maryland, revealed that the gas coming out of the comet contained unusually high amounts of carbon monoxide (CO). The concentration of CO is higher than anyone has detected in any comet within 2 auauAstronomical unit (au): A unit of distance equal to the average distance between the Earth and the Sun, or 149.6 million kilometers (93 million miles). from the Sun (within less than 186 million miles, or 300 million kilometers) [1]. 2I/Borisov’s CO concentration was estimated to be between nine and 26 times higher than that of the average solar system comet.

Astronomers are interested to learn more about comets, because these objects spend most of their time at large distances from any star in very cold environments. Unlike planets, their interior compositions have not changed significantly since they were born. Therefore, they could reveal much about the processes that occurred during their birth in protoplanetary disks. “This is the first time we’ve ever looked inside a comet from outside our solar system,” said astrochemist Martin Cordiner, “and it is dramatically different from most other comets we’ve seen before.”

ALMA detected two molecules in the gas ejected by the comet: hydrogen cyanide (HCN) and carbon monoxide (CO). While the team expected to see HCN, which is present in 2I/Borisov at similar amounts to that found in solar system comets, they were surprised to see large amounts of CO. “The comet must have formed from material very rich in CO ice, which is only present at the lowest temperatures found in space, below -420 degrees Fahrenheit (-250 degrees Celsius),” said planetary scientist Stefanie Milam.

“ALMA has been instrumental in transforming our understanding of the nature of cometary material in our own solar system – and now with this unique object coming from our next door neighbors. It is only because of ALMA’s unprecedented sensitivity at submillimeter wavelengths that we are able to characterize the gas coming out of such unique objects,“ said Anthony Remijan of the National Radio Astronomy Observatory in Charlottesville, Virginia and co-author of the paper.

Carbon monoxide is one of the most common molecules in space and is found inside most comets. Yet, there’s a huge variation in the concentration of CO in comets and no one quite knows why. Some of this might be related to where in the solar system a comet was formed; some has to do with how often a comet’s orbit brings it closer to the Sun and leads it to release its more easily evaporated ices.

“If the gases we observed reflect the composition of 2I/Borisov’s birthplace, then it shows that it may have formed in a different way than our own solar system comets, in an extremely cold, outer region of a distant planetary system,” added Cordiner. This region can be compared to the cold region of icy bodies beyond Neptune, called the Kuiper Belt.

The team can only speculate about the kind of star that hosted 2I/Borisov’s planetary system. “Most of the protoplanetary disks observed with ALMA are around younger versions of low-mass stars like the Sun,” said Cordiner. “Many of these disks extend well beyond the region where our own comets are believed to have formed, and contain large amounts of extremely cold gas and dust. It is possible that 2I/Borisov came from one of these larger disks.”

Due to its high speed when it traveled through our solar system (33 km/s or 21 miles/s) astronomers suspect that 2I/Borisov was kicked out from its host system, probably by interacting with a passing star or giant planet. It then spent millions or billions of years on a cold, lonely voyage through interstellar space before it was discovered on 30 August 2019 by amateur astronomer Gennady Borisov.

2I/Borisov is only the second interstellar object to be detected in our solar system. The first – 1I/’Oumuamua – was discovered in October 2017, at which point it was already on its way out, making it difficult to reveal details about whether it was a comet, asteroid, or something else. The presence of an active gas and dust coma surrounding 2I/Borisov made it the first confirmed interstellar comet.

“2I/Borisov gave us the first glimpse into the chemistry that shaped another planetary system,” said Milam. “But only when we can compare the object to other interstellar comets, will we learn whether 2I/Borisov is a special case, or if every interstellar object has unusually high levels of CO.”

[1] One comet known as C/2016 R2 (PanSTARRS), which came from the Oort Cloud, had even higher levels of CO than Borisov when it was at a distance of 2.8 au from the Sun. 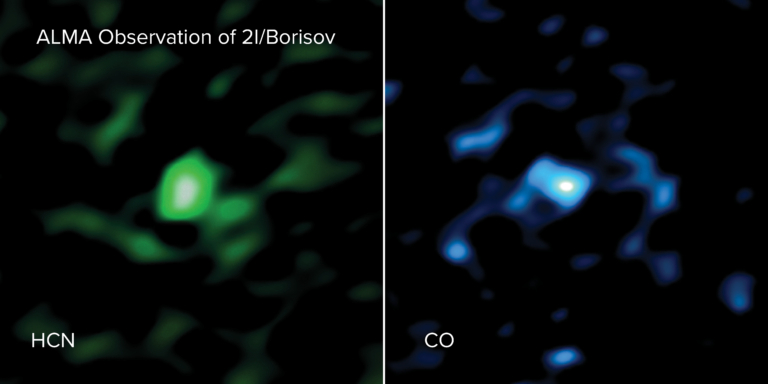 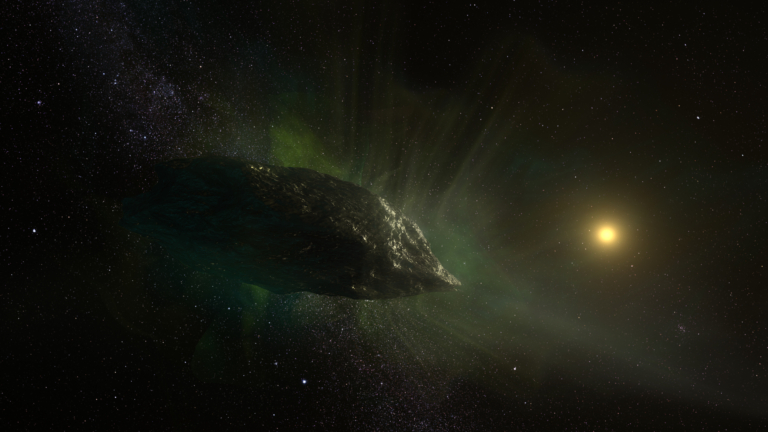 Artist impression of the interstellar comet 2I/Borisov as it travels through our solar system. This...Read More
Credit: NRAO/AUI/NSF, S. Dagnello 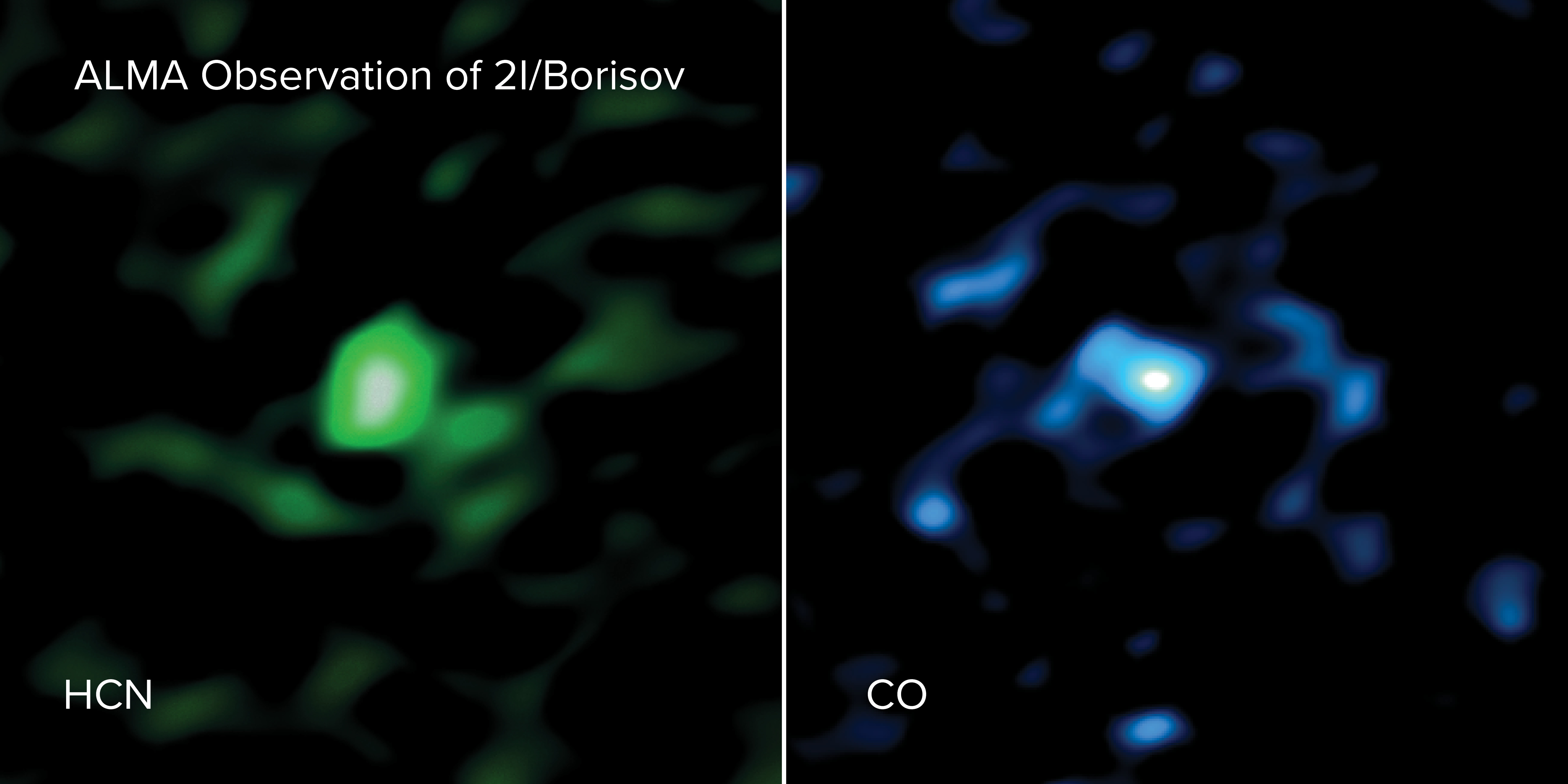 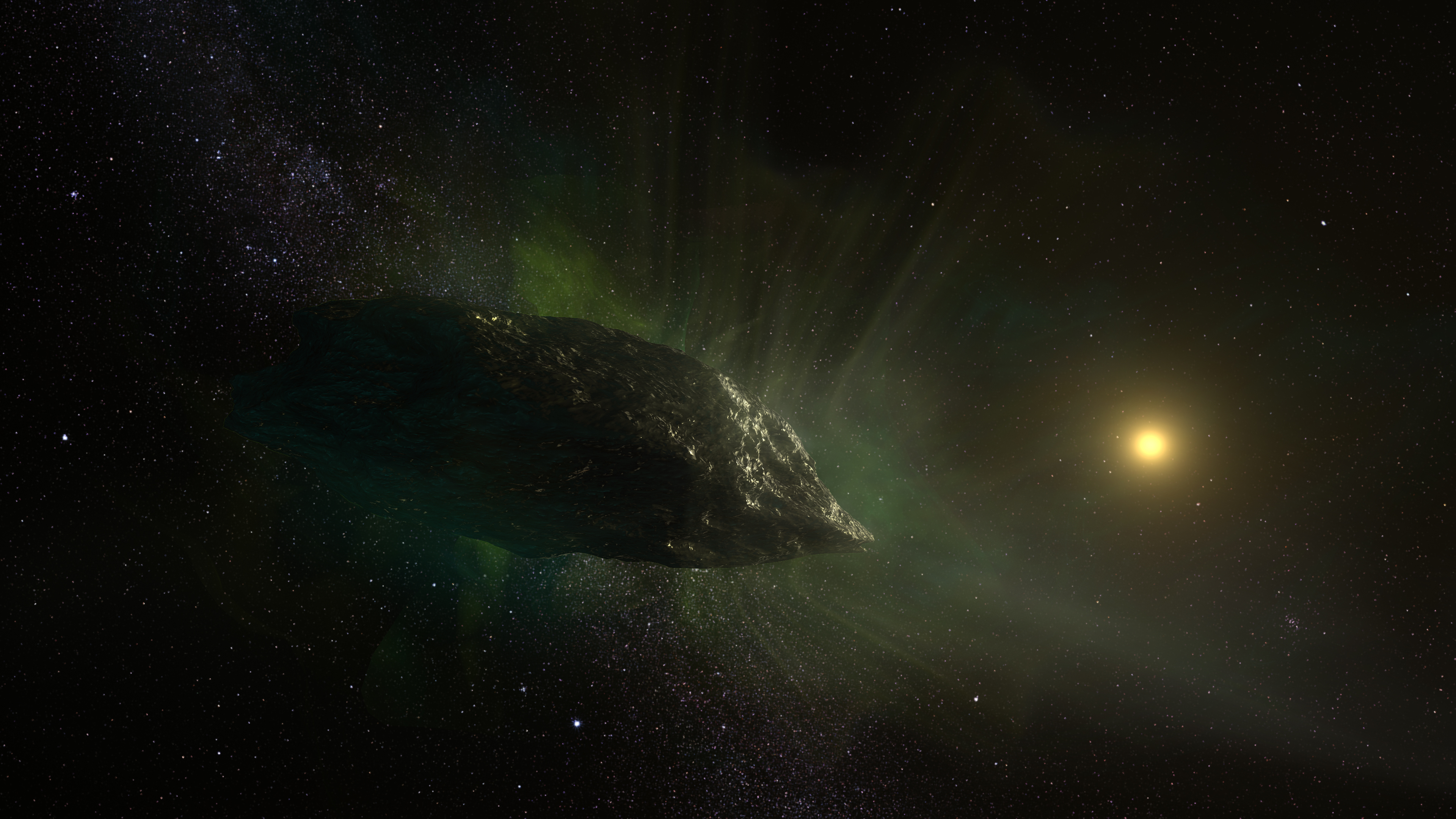