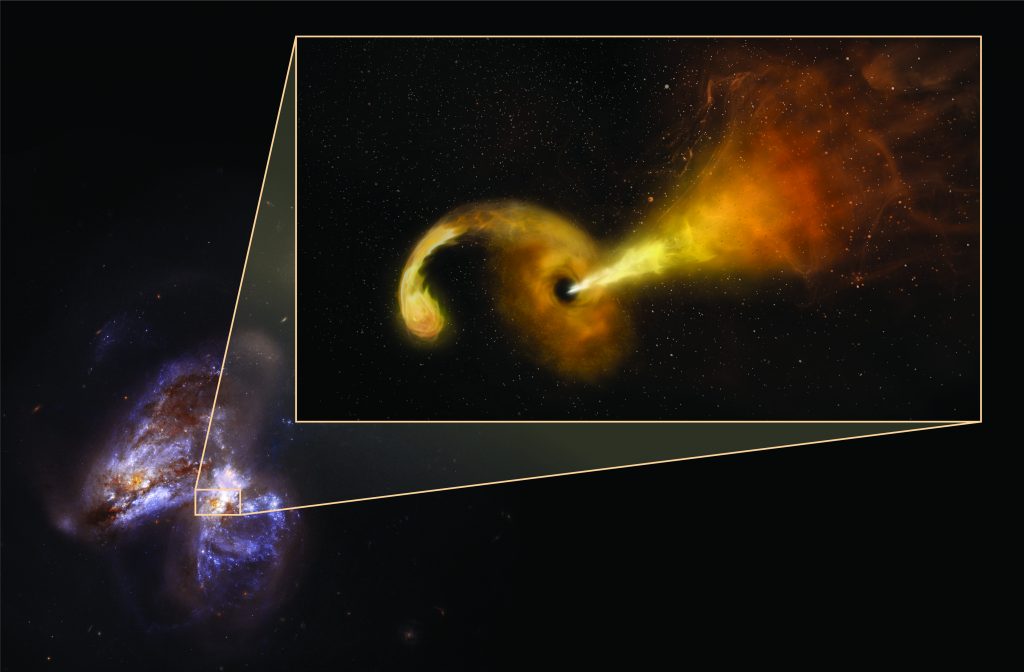 For the first time, astronomers have directly imaged the formation and expansion of a fast-moving jet of material ejected when the powerful gravity of a supermassive black hole ripped apart a star that wandered too close to the cosmic monster.

The scientists tracked the event with radio and infrared telescopes, including the National Science Foundation’s Very Long Baseline Array (VLBA), in a pair of colliding galaxies called Arp 299, nearly 150 million light-years from Earth. At the core of one of the galaxies, a black hole 20 million times more massive than the Sun shredded a star more than twice the Sun’s mass, setting off a chain of events that revealed important details of the violent encounter.

Only a small number of such stellar deaths, called tidal disruption events, or TDEs, have been detected, although scientists have hypothesized that they may be a more common occurrence. Theorists suggested that material pulled from the doomed star forms a rotating disk around the black hole, emitting intense X-rays and visible light, and also launches jets of material outward from the poles of the disk at nearly the speed of light.

“Never before have we been able to directly observe the formation and evolution of a jet from one of these events,” said Miguel Perez-Torres, of the Astrophysical Institute of Andalusia in Granada, Spain.

The first indication came on January 30, 2005, when astronomers using the William Herschel Telescope in the Canary Islands discovered a bright burst of infrared emission coming from the nucleus of one of the colliding galaxies in Arp 299. On July 17, 2005, the VLBA revealed a new, distinct source of radio emission from the same location.

“As time passed, the new object stayed bright at infrared and radio wavelengths, but not in visible light and X-rays,” said Seppo Mattila, of the University of Turku in Finland. “The most likely explanation is that thick interstellar gas and dust near the galaxy’s center absorbed the X-rays and visible light, then re-radiated it as infrared,” he added. The researchers used the Nordic Optical Telescope on the Canary Islands and NASA’s Spitzer space telescope to follow the object’s infrared emission.

Continued observations with the VLBA, the European VLBI Network (EVN), and other radio telescopes, carried out over nearly a decade, showed the source of radio emission expanding in one direction, just as expected for a jet. The measured expansion indicated that the material in the jet moved at an average of one-fourth the speed of light. Fortunately, the radio waves are not absorbed in the core of the galaxy, but find their way through it to reach the Earth.

These observations used multiple radio-telescope antennas, separated by thousands of miles, to gain the resolving power, or ability to see fine detail, required to detect the expansion of an object so distant. The patient, years-long data collection rewarded the scientists with the evidence of a jet.

Most galaxies have supermassive black holes, containing millions to billions of times the mass of the Sun, at their cores. In a black hole, the mass is so concentrated that its gravitational pull is so strong that not even light can escape. When those supermassive black holes are actively drawing in material from their surroundings, that material forms a rotating disk around the black hole, and superfast jets of particles are launched outward. This is the phenomenon seen in radio galaxies and quasars.

“Much of the time, however, supermassive black holes are not actively devouring anything, so they are in a quiet state,” Perez-Torres explained. “Tidal disruption events can provide us with a unique opportunity to advance our understanding of the formation and evolution of jets in the vicinities of these powerful objects,” he added.

“Because of the dust that absorbed any visible light, this particular tidal disruption event may be just the tip of the iceberg of what until now has been a hidden population,” Mattila said. “By looking for these events with infrared and radio telescopes, we may be able to discover many more, and learn from them,” he said.

Such events may have been more common in the distant Universe, so studying them may help scientists understand the environment in which galaxies developed billions of years ago.

The discovery, the scientists said, came as a surprise. The initial infrared burst was discovered as part of a project that sought to detect supernova explosions in such colliding pairs of galaxies. Arp 299 has seen numerous stellar explosions, and has been dubbed a “supernova factory.” This new object originally was considered to be a supernova explosion. Only in 2011, six years after discovery, the radio-emitting portion began to show an elongation. Subsequent monitoring showed the expansion growing, confirming that what the scientists are seeing is a jet, not a supernova.

Mattila and Perez-Torres led a team of 36 scientists from 26 institutions around the world in the observations of Arp 299. They published their findings in the 14 June online issue of the journal Science. Data from the NSF’s Very Large Array (VLA) and Green Bank Telescope (GBT) were used for some of this work. 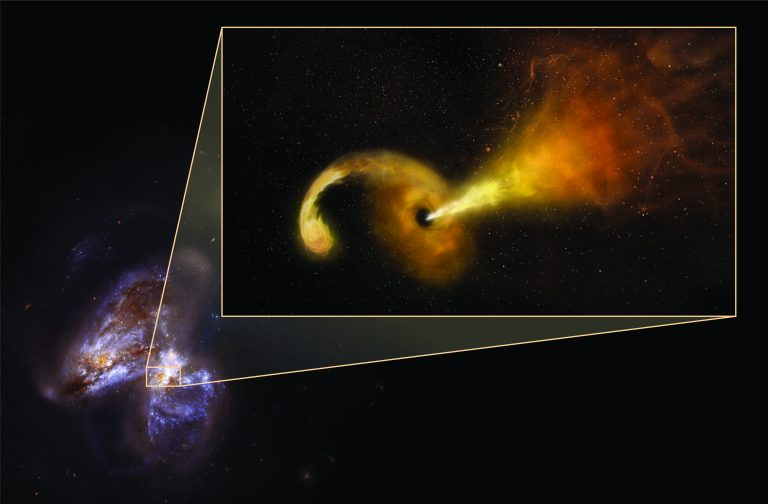 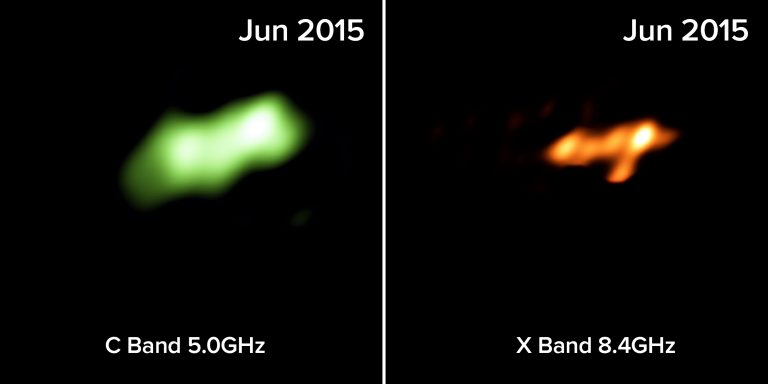 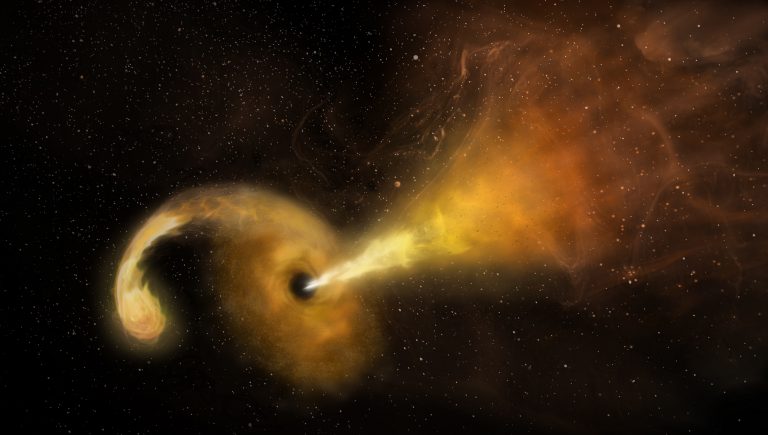 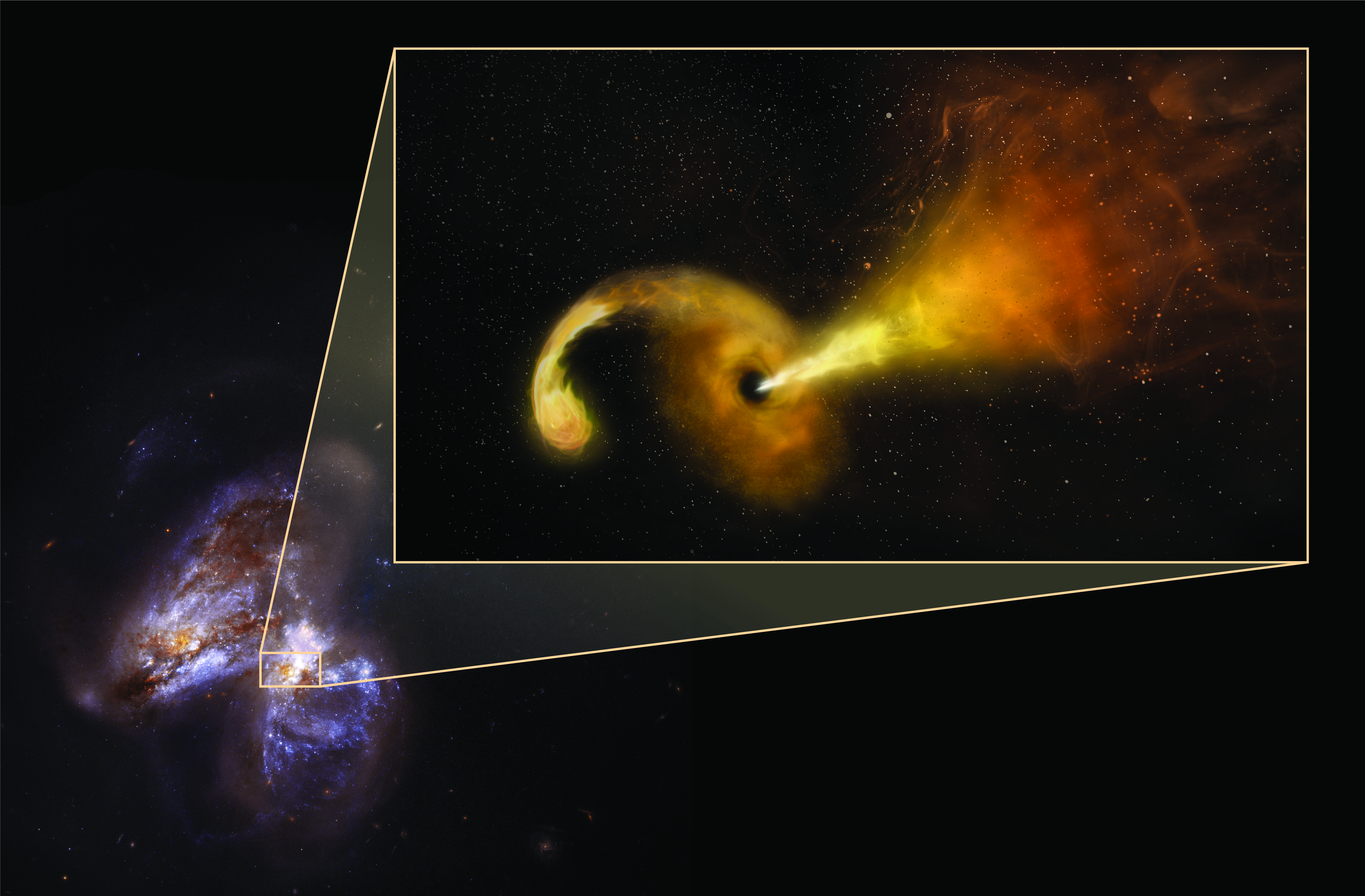 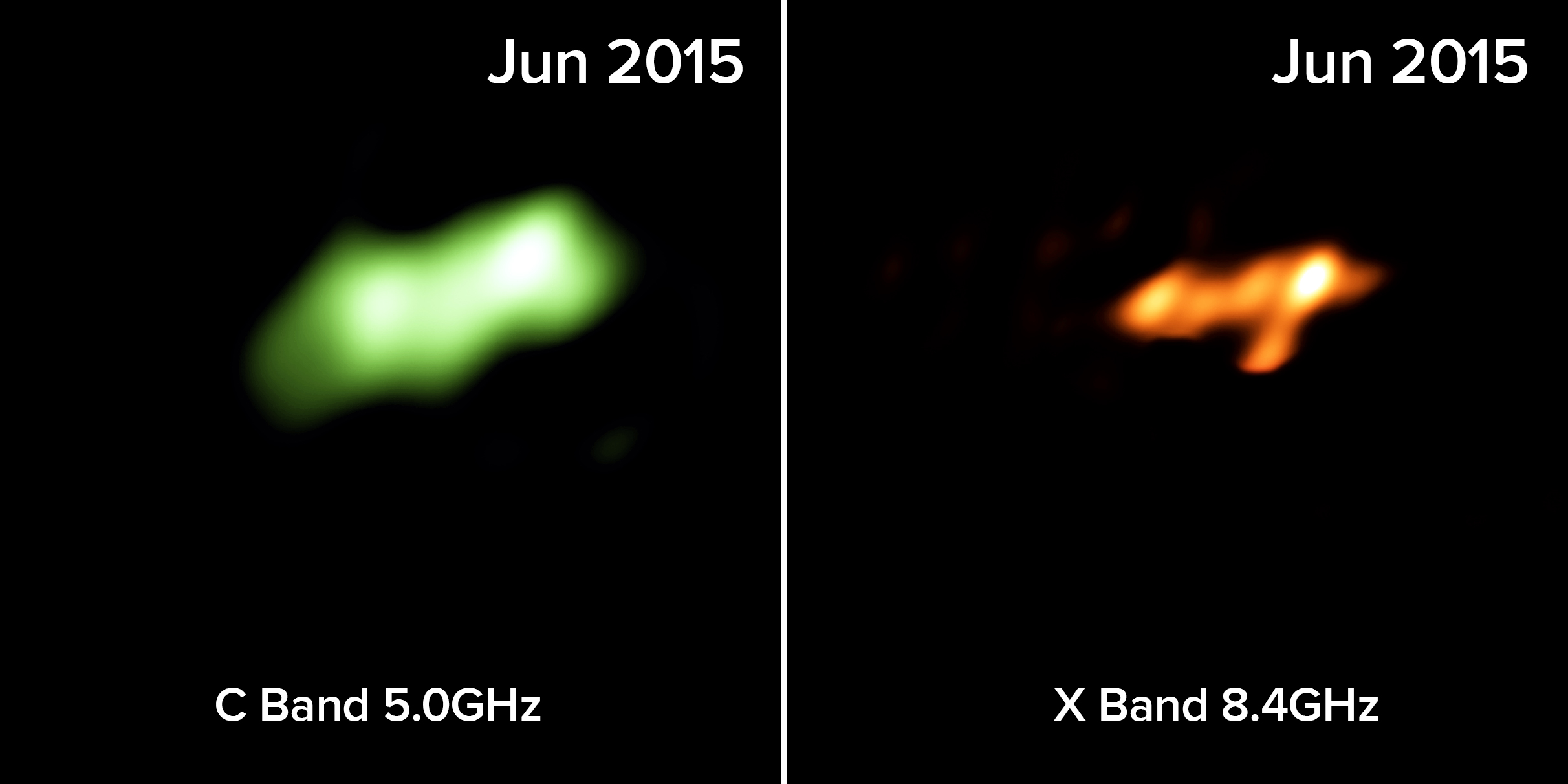 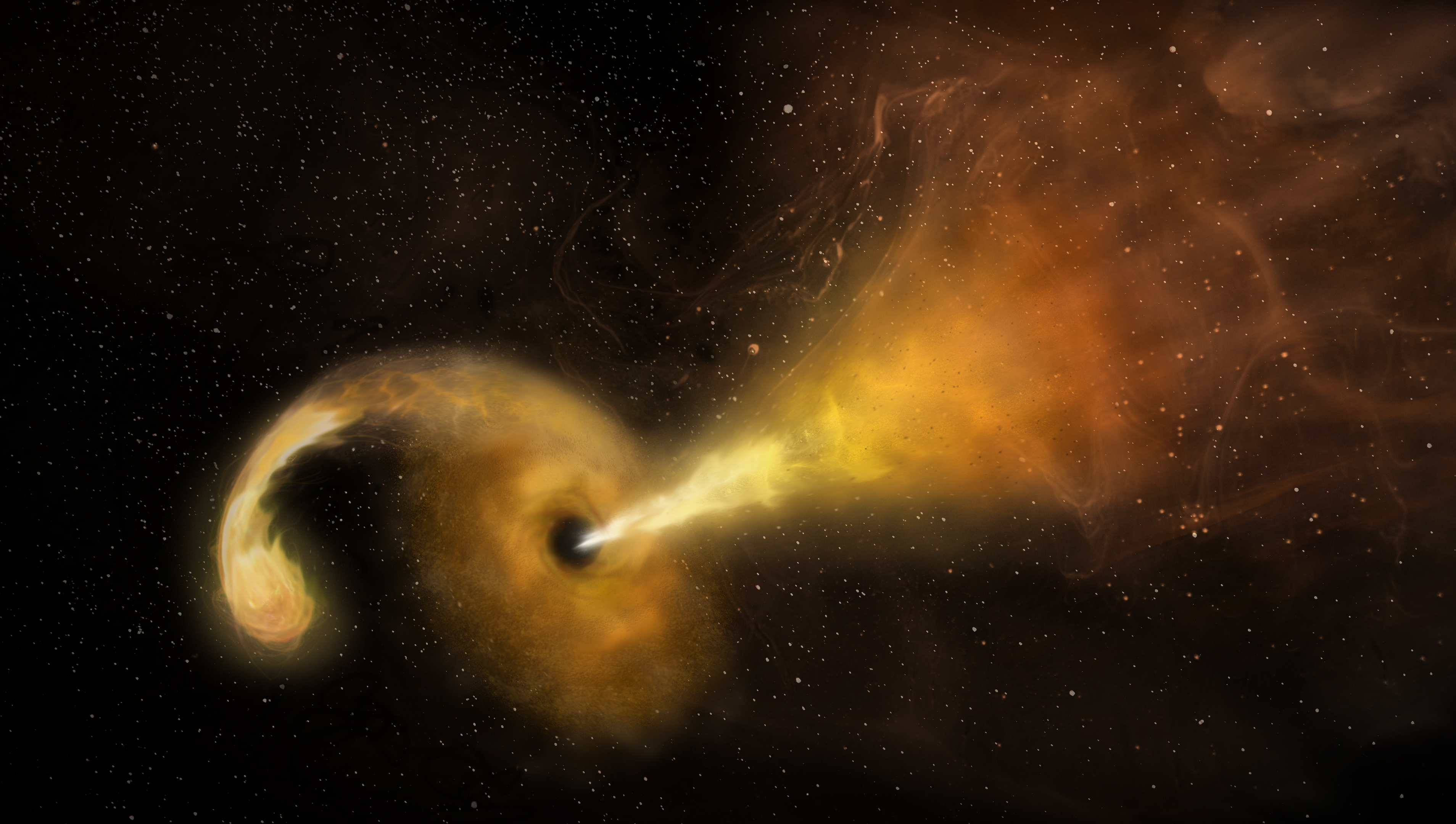