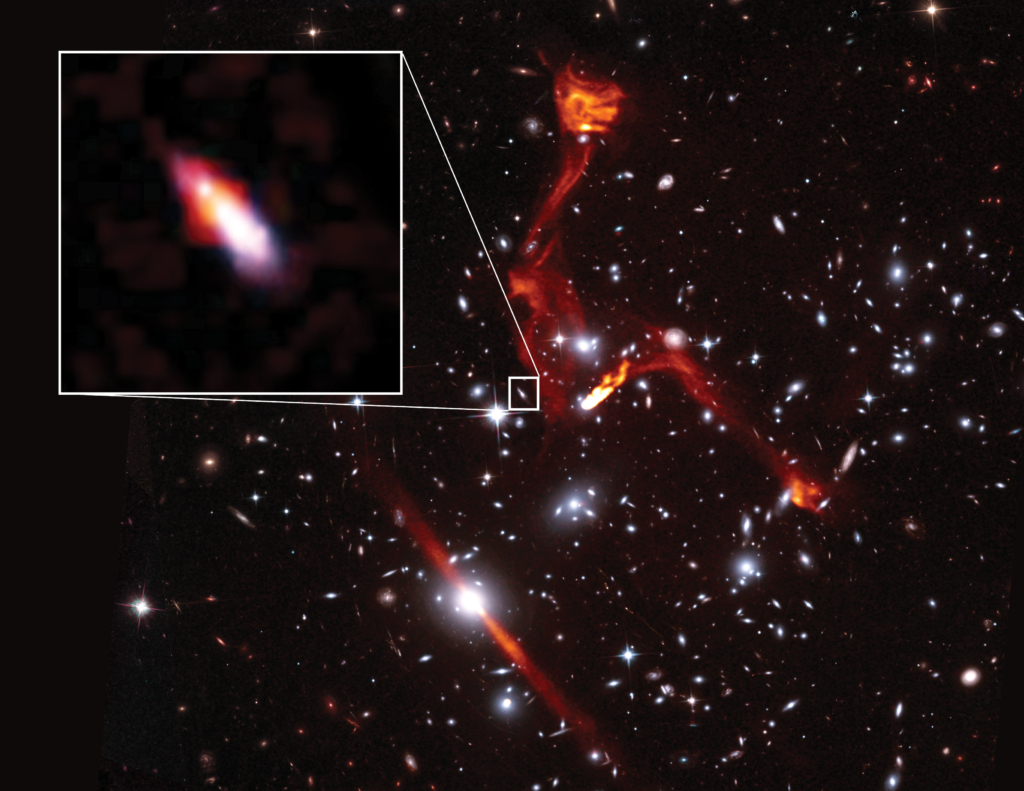 Radio telescopes are the world’s most sensitive radio receivers, capable of finding extremely faint wisps of radio emission coming from objects at the farthest reaches of the universe. Recently, a team of astronomers used the National Science Foundation’s Karl G. Jansky Very Large Array (VLA) to take advantage of a helping hand from nature to detect a distant galaxy that likely is the faintest radio-emitting object yet found.

The discovery was part of the VLA Frontier Fields Legacy Survey, led by NRAO Astronomer Eric Murphy, which used distant clusters of galaxies as natural lenses to study objects even farther away. The clusters served as gravitational lenses, using the gravitational pull of the galaxies in the clusters to bend and magnify light and radio waves coming from the more-distant objects.

In this composite, a VLA radio image is superimposed on a visible-light image from the Hubble Space Telescope. The prominent red-orange objects are radio relics — large structures possibly caused by shock waves — inside the foreground galaxy cluster, called MACSJ0717.5+3745, which is more than 5 billion light-years from Earth.

Detailed VLA observations showed that many of the galaxies in this image are emitting radio waves in addition to visible light. The VLA data revealed that one of these galaxies, shown in the pullout, is more than 8 billion light-years distant. Its light and radio waves have been bent by the intervening cluster’s gravitational-lensing effect.

The radio image of this distant galaxy, called VLAHFF-J071736.66+374506.4, has been magnified more than 6 times by the gravitational lens, the astronomers said. That magnification is what allowed the VLA to detect it.

“This probably is the faintest radio-emitting object ever detected,” said Ian Heywood, of Oxford University in the UK. “This is exactly why we want to use these galaxy clusters as powerful cosmic lenses to learn more about the objects behind them.”

“The magnification provided by the gravitational lens, combined with extremely sensitive VLA imaging, gave us an unprecedented look at the structure of a galaxy 300 times less massive than our Milky Way at a time when the universe was less than half its current age. This is giving us valuable insights on star formation in such low-mass galaxies at that time and how they eventually assembled into more massive galaxies,” said Eric Jimenez-Andrade, of NRAO.

The scientists are reporting their work in a pair of papers in the Astrophysical Journal. 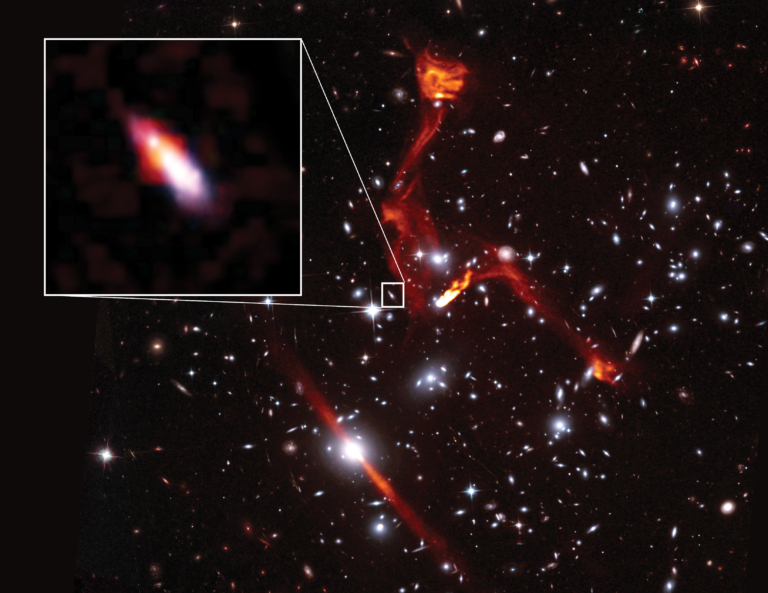 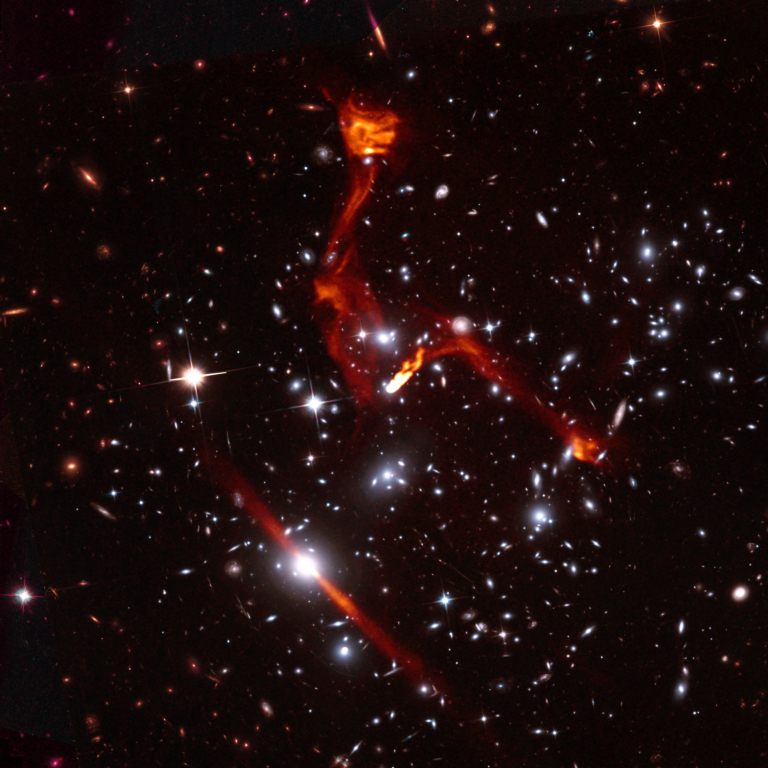 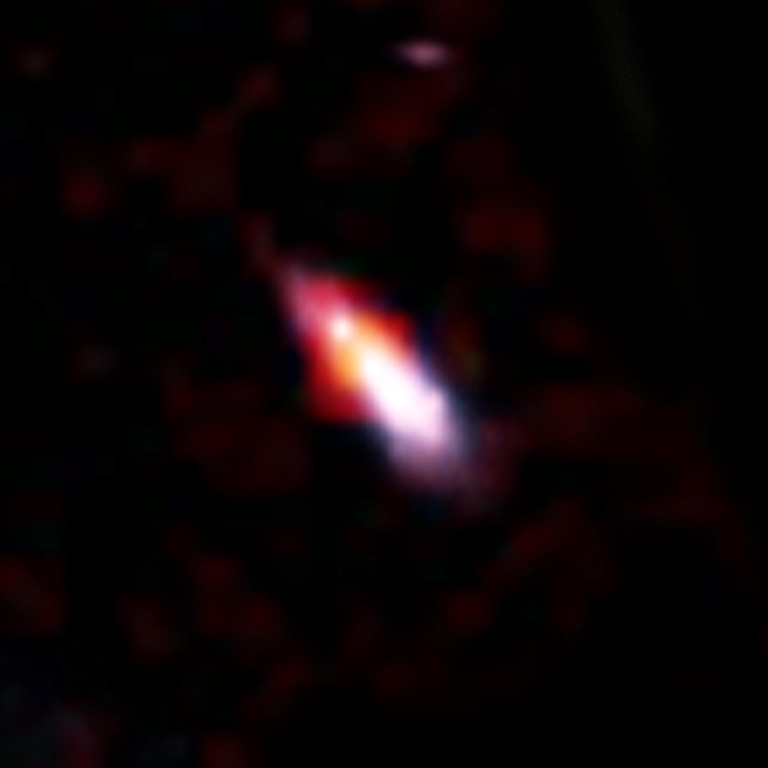 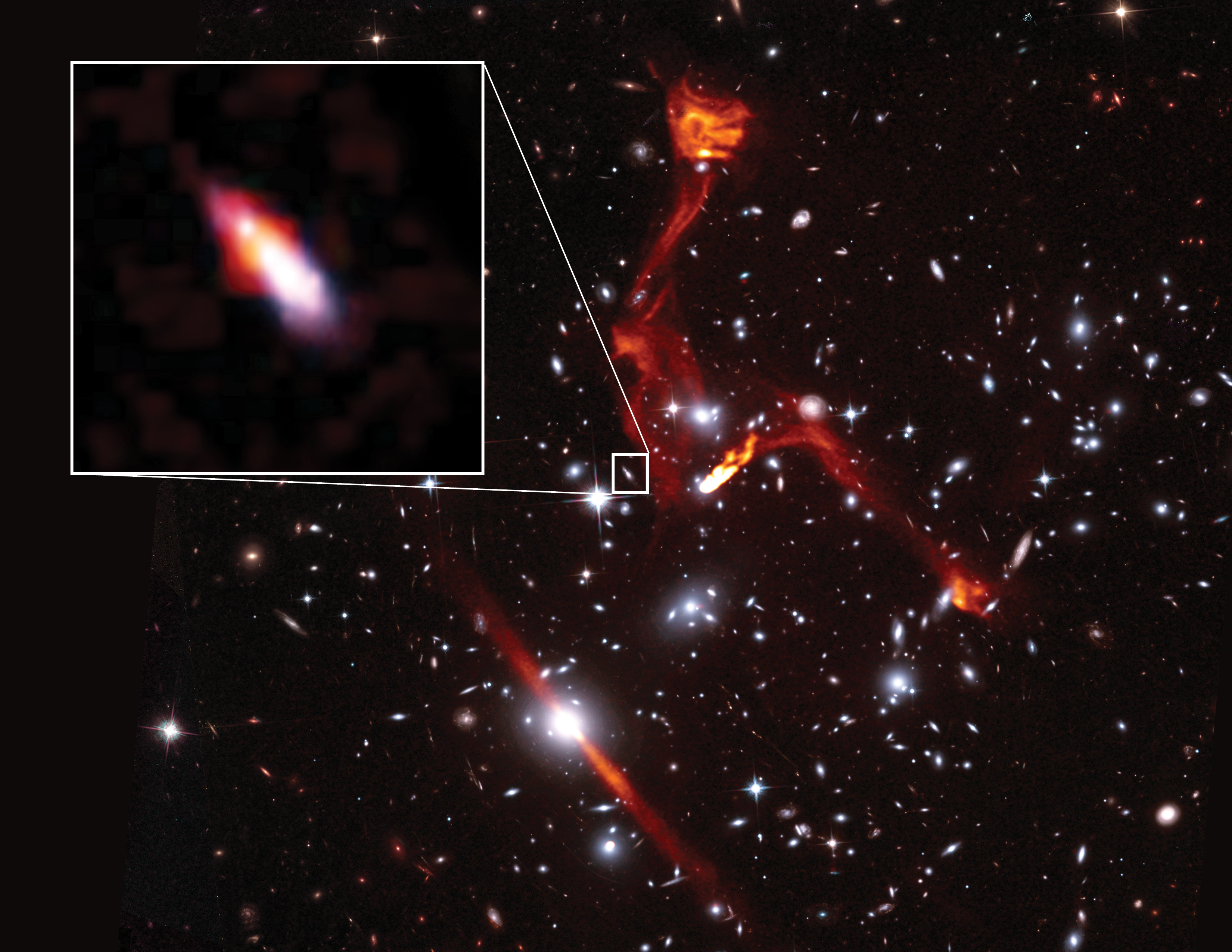 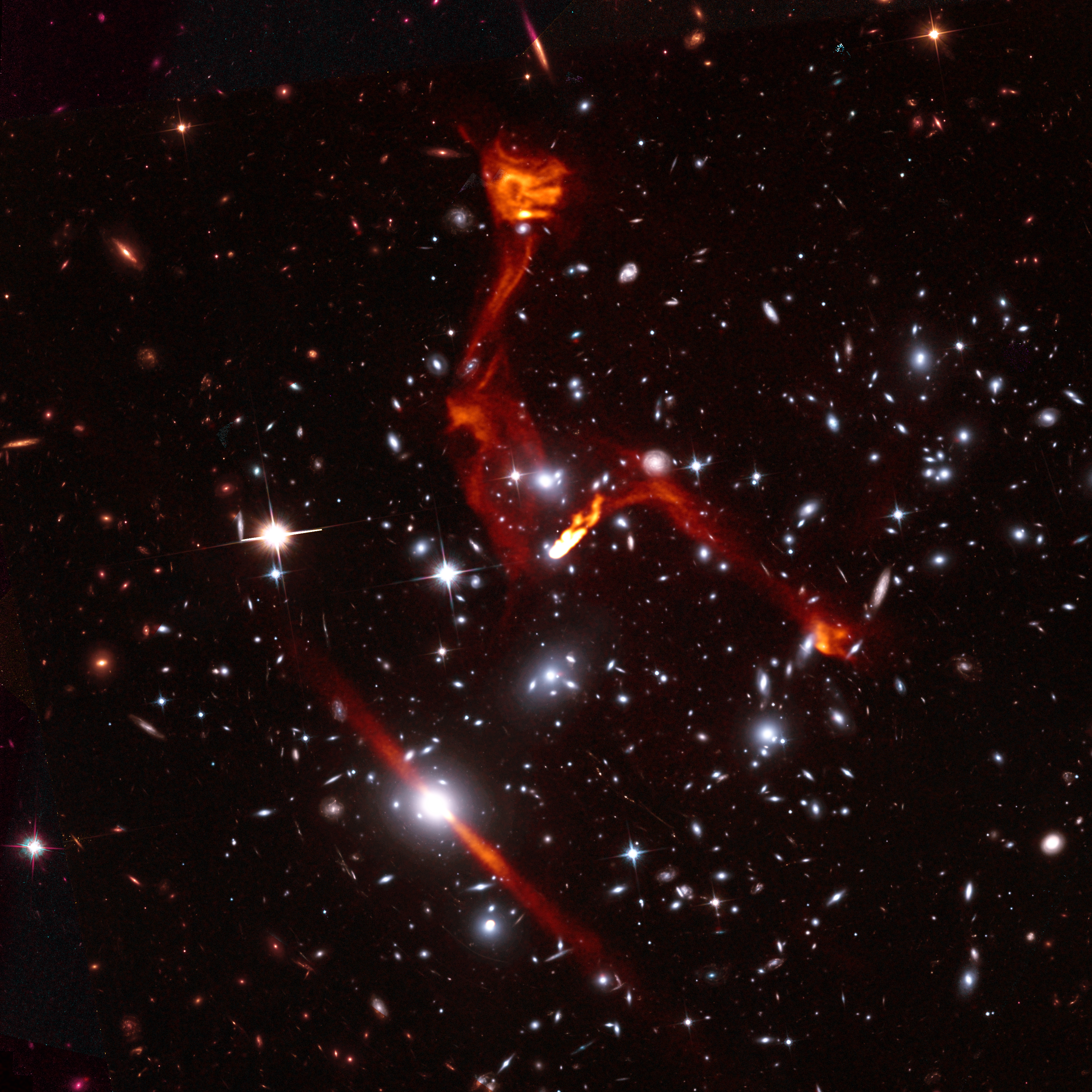 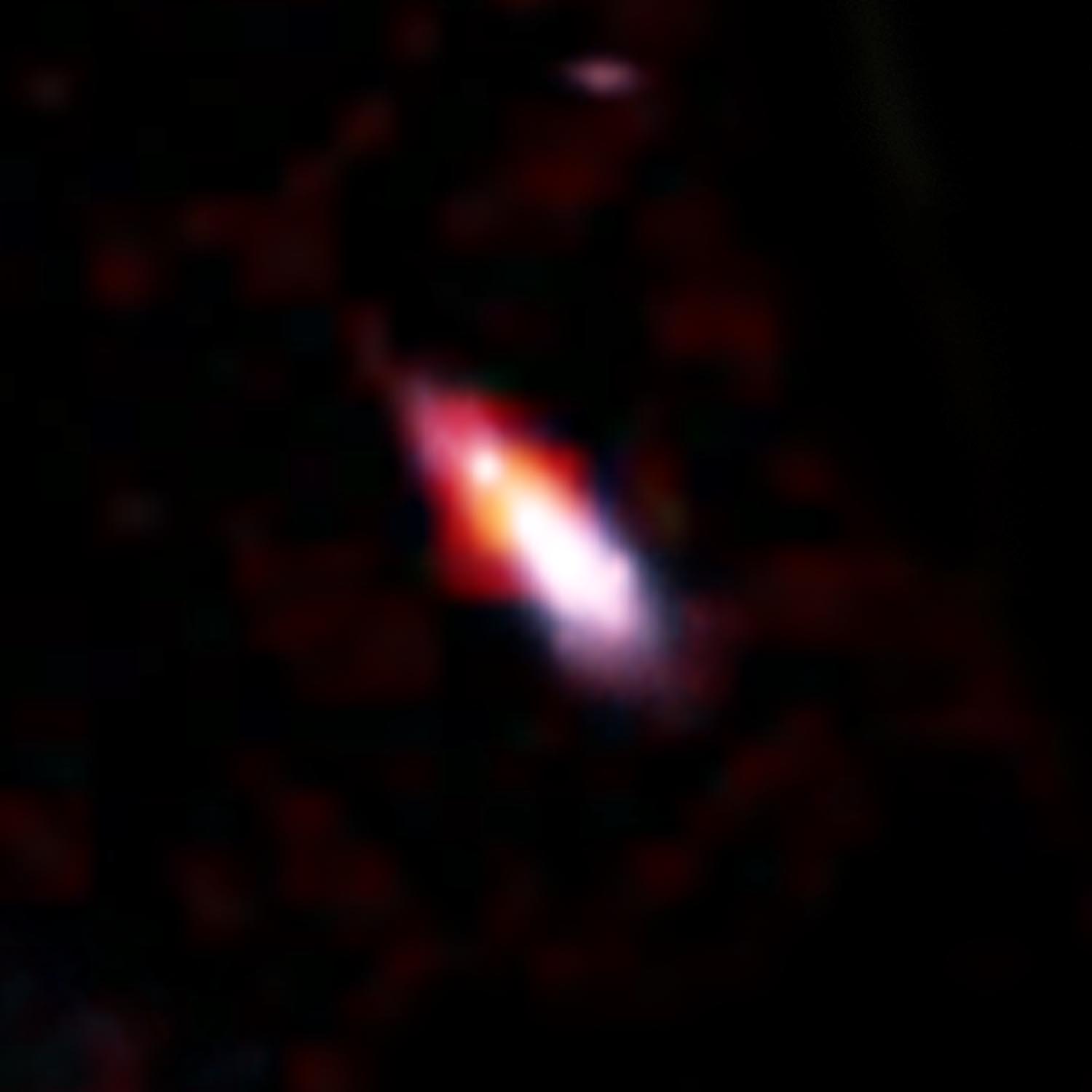