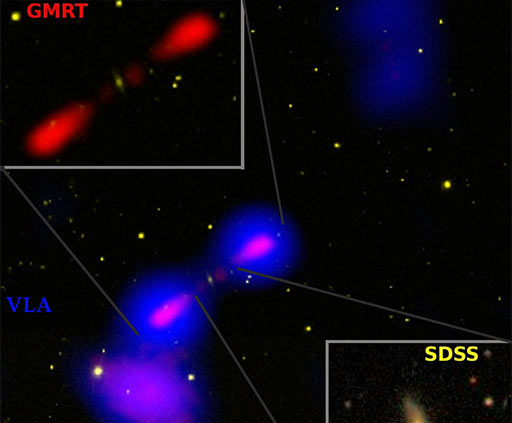 A galaxy with a combination of characteristics never seen before is giving astronomers a tantalizing peek at processes they believe played key roles in the growth of galaxies and clusters of galaxies early in the history of the Universe.

The galaxy, dubbed Speca by the researchers, is only the second spiral, as opposed to elliptical, galaxy known to produce large, powerful jets of subatomic particles moving at nearly the speed of light. It also is one of only two galaxies to show that such activity occurred in three separate episodes.

Giant jets of superfast particles are powered by supermassive black holes at the cores of galaxies. Both elliptical and spiral galaxies harbor such black holes, but only Speca and one other spiral galaxy have been seen to produce large jets. The jets pour outward from the poles of rapidly-rotating disks of material orbiting the black hole. The on-and-off jet episodes have been seen in a dozen ellipticals, but only one other elliptical shows evidence, like Speca, for three such distinct episodes.

“This is probably the most exotic galaxy with a black hole ever seen. It has the potential to teach us new lessons about how galaxies and clusters of galaxies formed and developed into what we see today,” said Ananda Hota, of the Academia Sinica Institute of Astronomy and Astrophysics (ASIAA), in Taiwan.

The scientists believe that Speca, about 1.7 billion light-years from Earth, and the 60-some other galaxies in a cluster with it are providing a look at what young galaxies and clusters may have been like when the Universe was much younger. In the young Universe, galaxies in such clusters would have been gathering up additional material, colliding with each other, undergoing bursts of star formation, and interacting with primordial material falling into the cluster from outside.

“Speca is showing evidence for many of these phenomena,” Ananda said, adding that “We hope to find many more galaxies like it with future observations, and to learn more about the processes and an environment that were much more common when the Universe was a fraction of its current age.”

Ananda’s team also examined the galaxy in images from the NRAO VLA Sky Survey (NVSS), then made new observations with the Giant Meterwave Radio Telescope (GMRT) in India, which observes at longer wavelengths than the VLA and is the premier telescope for observing at those long wavelengths.

With this impressive variety of data from across the electromagnetic spectrum, the researchers unraveled the galaxy’s complex and fascinating history.

The radio images from the VLA FIRST survey had shown one pair of radio-emitting lobes. The VLA’s NVSS images showed another, distinct pair of lobes farther from the galaxy. The GMRT images confirmed this second pair, but showed another, smaller pair close to the galaxy, presumably produced by the most-recently ejected jet particles.

“By using these multiple sets of data, we found clear evidence for three distinct epochs of jet activity,” Ananda explained.

The biggest surprise — the low-frequency nature of the oldest, outermost lobes — gave a valuable clue about the galaxy’s — and the cluster’s — environment. The outermost radio-emitting lobes are old enough that their particles should have lost most of their energy and ceased to produce radio emission.

“We think these old, relic lobes have been ‘re-lighted’ by shock waves from rapidly-moving material falling into the cluster of galaxies as the cluster continues to accrete matter,” said Ananda.

“All these phenomena combined in one galaxy make Speca and its neighbors a valuable laboratory for studying how galaxies and clusters evolved billions of years ago,” Ananda said.

Sandeep K. Sirothia of India’s National Centre for Radio Astrophysics, Tata Institute of Fundamental Research (NCRA-TIFR) said, “The ongoing low-frequency TIFR GMRT Sky Survey will find many more relic radio lobes of past black hole activity and energetic phenomena in clusters of galaxies like those we found in Speca.”

Govind Swarup of NCRA-TIFR, who is not part of the team, described the finding as “an outstanding discovery that is very important for cluster formation models and highlights the importance of sensitive observations at meter wavelengths provided by the GMRT.”

In addition to Ananda and Sandeep, the research team includes: Youichi Ohyama, Chiranjib Konar, and Satoki Matsushita of ASIAA; Suk Kim and Soo-Chang Rey of Chungnam National University in Korea; D.J. Saikia of NCRA and Judith H. Croston of the University of Southampton in England. The scientists published their findings in the letters of the Monthly Notices of the Royal Astronomical Society.

The National Radio Astronomy Observatory is a facility of the National Science Foundation, operated under cooperative agreement by Associated Universities, Inc. The GMRT is built and operated by India’s National Centre for Radio Astrophysics, Tata Institute of Fundamental Research.