An international team of astronomers has used the National Science Foundation’s Very Long Baseline Array (VLBA) radio telescope and NASA’s Hubble Space Telescope (HST) to discover the first gravitational lens in which the single image of a very distant galaxy has been split into six different images. The unique configuration is produced by the gravitational effect of three galaxies along the line of sight between the more-distant galaxy and Earth.

“This is the first gravitational lens with more than four images of the background object that is produced by a small group of galaxies rather than a large cluster of galaxies,” said David Rusin, who just received his Ph.D. from the University of Pennsylvania. “Such systems are expected to be extremely rare, so this discovery is an important stepping stone. Because this is an intermediate case between gravitational lenses produced by single galaxies and lenses produced by large clusters of galaxies, it will give us insights we can’t get from other types of lenses,” Rusin added.

The gravitational lens, called CLASS B1359+154, consists of a galaxy more than 11 billion light-years away in the constellation Bootes, with a trio of galaxies more than 7 billion light-years away along the same line of sight. The more-distant galaxy shows signs that it contains a massive black hole at its core and also has regions in which new stars are forming. The gravitational effect of the intervening galaxies has caused the light and radio waves from the single, more-distant galaxy to be “bent” to form six images as seen from Earth. Four of these images appear outside the triangle formed by the three intermediate galaxies and two appear inside that triangle.

“This lens system is a very interesting case to study because it is more complicated than lenses produced by single galaxies, and yet simpler than lenses produced by clusters of numerous galaxies,” said Chris Kochanek of the Harvard-Smithsonian Center for Astrophysics (CfA). “When we understand this system, we will have a much clearer picture of how galaxies are changed by being part of a bigger cluster of galaxies,” he added.

B1359+154 was discovered in 1999 by the Cosmic Lens All-Sky Survey, an international collaboration of astronomers who use radio telescopes to search the sky for gravitational lenses. Images made by the NSF’s Very Large Array in New Mexico and by Britain’s MERLIN radio telescope showed six objects suspected of being gravitational-lens images, but the results were inconclusive. Rusin and his team used the VLBA and HST in 1999 and 2000 to make more-detailed studies of B1359+154. The combination of data from the VLBA and HST convinced the astronomers that B1359+154 actually consists of six lensed images of a single background galaxy. The VLBA images were made from data collected during observations at a radio frequency of 1.7 GHz.

“This is a great example of modern, multi-wavelength astronomy,” said Rusin. “We need the radio telescopes to detect the gravitational lenses in the first place, then we need the visible-light information from Hubble to show us additional detail about the structure of the system.”

Armed with the combined VLBA and HST data about the positions and brightnesses of the six images of the background galaxy as well as the positions of the three intermediate galaxies, the astronomers did computer simulations to show how the gravitation of the three galaxies could produce the lens effect. They were able to design a computer model of the system that, in fact, produces the six images seen in B1359+154.

“Our computer model certainly is not perfect, and we need to do more observations of this system to refine it, but we have clearly demonstrated that the three galaxies we see can produce a six-image lens system,” said Martin Norbury, a graduate student at Jodrell Bank Observatory in Britain. “We think this work will give us an excellent tool for studying much-denser clusters of galaxies and the relationships of the individual cluster galaxies to the ‘halo’ of dark matter in which they are embedded,” he added.

Clusters of galaxies are known to produce gravitational lenses with up to eight images of a single background object. However, the number of galaxies in such a cluster makes it difficult for astronomers to decipher just how their gravitational effects have combined to produce the multiple images. Researchers hope to be able to understand the lensing effect well enough to use the lenses to show them how galaxies, gas and unseen dark matter in clusters are distributed. A system such as B1359+154, with only three galaxies involved in the lensing, can help astronomers learn how complex gravitational lenses work.

“The next big step is to use HST to see the pattern of rings produced by the galaxy surrounding the black hole. We already see hints of them, but with the upgrades to HST in the next servicing mission we should be able to trace it completely both to pin down the structure of the lens and to have an enormously magnified image for studying the distant host galaxy,” Kochanek said.

The VLBA is a system of 10 radio-telescope antennas that work together as a single astronomical instrument. The antennas are spread across the United States, from Hawaii in the west to the U.S. Virgin Islands in the east. A radio telescope system more than 5,000 miles across, the VLBA produces extremely detailed images.

The National Radio Astronomy Observatory is a facility of the National Science Foundation, operated under cooperative agreement by Associated Universities, Inc. The Space Telescope Science Institute is operated by the Association of Universities for Research in Astronomy, Inc., for NASA,, under contract with the Goddard Space Flight Center, Greenbelt, MD. The Hubble Space Telescope is a project of international Cooperation between NASA and the European Space Agency. 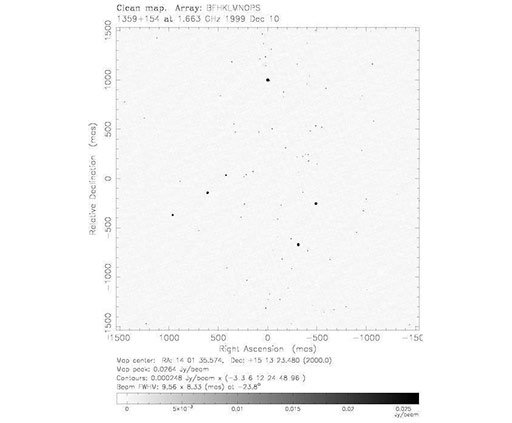