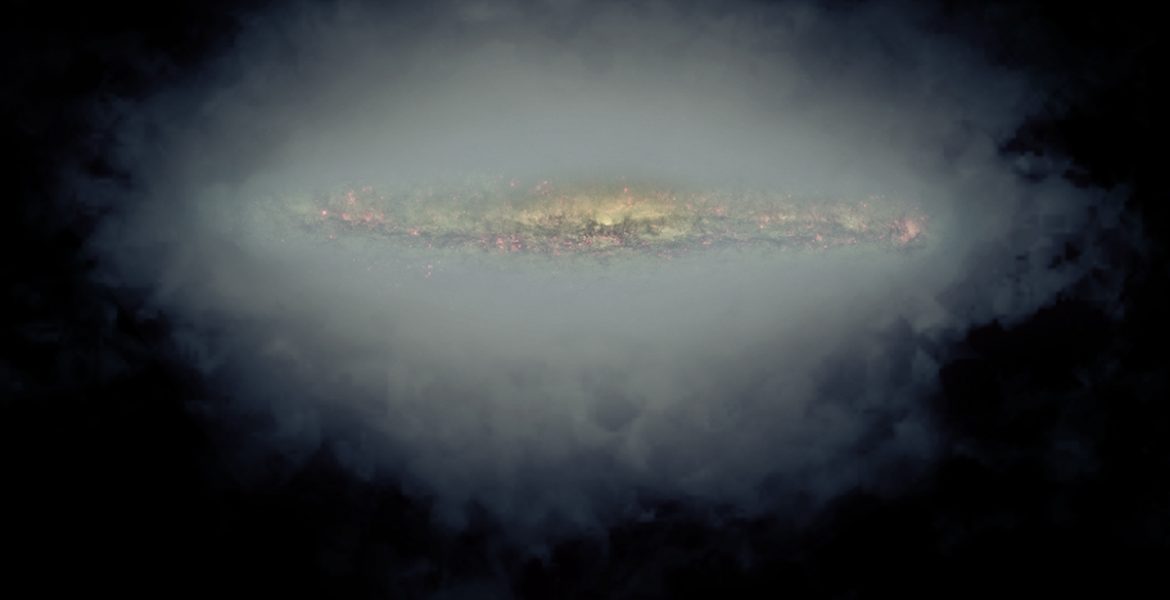 Credit: Jayanne English (U. Manitoba), with support from Judith Irwin and Theresa Wiegert (Queen’s U.) for the CHANG-ES consortium; NRAO/AUI/NSF; NASA/STScI

A study of spiral galaxies seen edge-on has revealed that “halos” of cosmic rays and magnetic fields above and below the galaxies’ disks are much more common than previously thought.

An international team of astronomers used the Karl G. Jansky Very Large Array (VLA) to study 35 edge-on spiral galaxies at distances from 11 million to 137 million light-years from Earth. The study took advantage of the ability of the VLA, following completion of a decade-long upgrade project, to detect radio emission much fainter than previously possible.

“We knew before that some halos existed, but, using the full power of the upgraded VLA and the full power of some advanced image-processing techniques, we found that these halos are much more common among spiral galaxies than we had realized,” said Judith Irwin, of Queen’s University in Canada, leader of the project.

Spiral galaxies, like our own Milky Way, have the vast majority of their stars, gas, and dust in a flat, rotating disk with spiral arms. Most of the light and radio waves seen with telescopes come from objects in that disk. Learning about the environment above and below such disks has been difficult.

“Studying these halos with radio telescopes can give us valuable information about a wide range of phenomena, including the rate of star formation within the disk, the winds from exploding stars, and the nature and origin of the galaxies’ magnetic fields,” said Theresa Wiegert, also of Queen’s University, lead author of a paper in the Astronomical Journal reporting the team’s findings. The paper provides the first analysis of data from all 35 galaxies in the study.

To see how extensive a “typical” halo is, the astronomers scaled their images of 30 of the galaxies to the same diameter, then another of the authors, Jayanne English, of the University of Manitoba in Canada, combined them into a single image. The result, said Irwin, is “a spectacular image showing that cosmic rays and magnetic fields not only permeate the galaxy disk itself, but extend far above and below the disk.”

The combined image, the scientists said, confirms a prediction of such halos made in 1961.

Along with the report on their findings, the astronomers also are making their first batch of specialized VLA images available to other researchers. In previous publications, the team described the details of their project and its goals. The team has completed a series of VLA observations and their latest paper is based on analysis of their first set of images. They now are analyzing additional datasets, and also will make those additional images available to other scientists when they publish the results of the later analyses.

“The results from this survey will help answer many unsolved questions in galactic evolution and star formation,” said Marita Krause of the Max-Planck Institute for Radioastronomy in Bonn, Germany.

The data are available at: http://queensu.ca/changes

The National Radio Astronomy Observatory is a facility of the National Science Foundation, operated under cooperative agreement by Associated Universities, Inc. This work was supported by the Natural Sciences and Engineering Research Council of Canada. 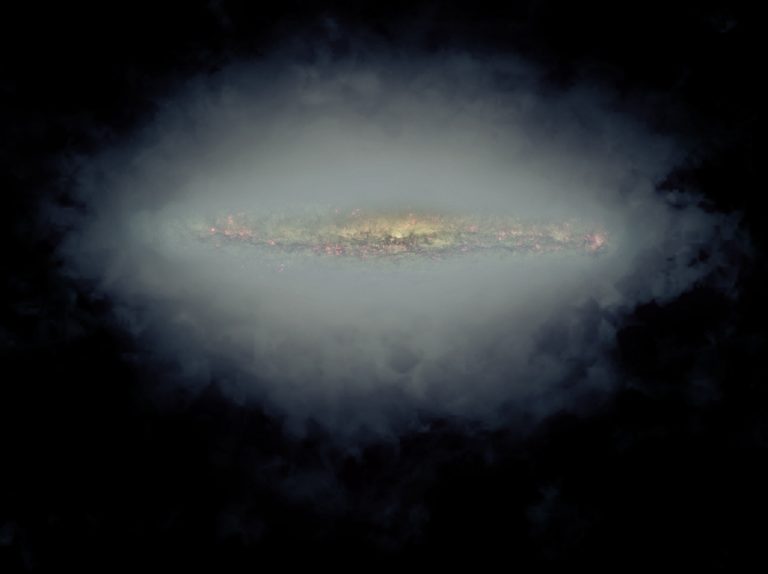 Composite image of an edge-on spiral galaxy with a radio halo produced by fast-moving particles...Read More
Credit: Jayanne English (U. Manitoba), with support from Judith Irwin and Theresa Wiegert (Queen’s U.) for the CHANG-ES consortium; NRAO/AUI/NSF; NASA/STScI 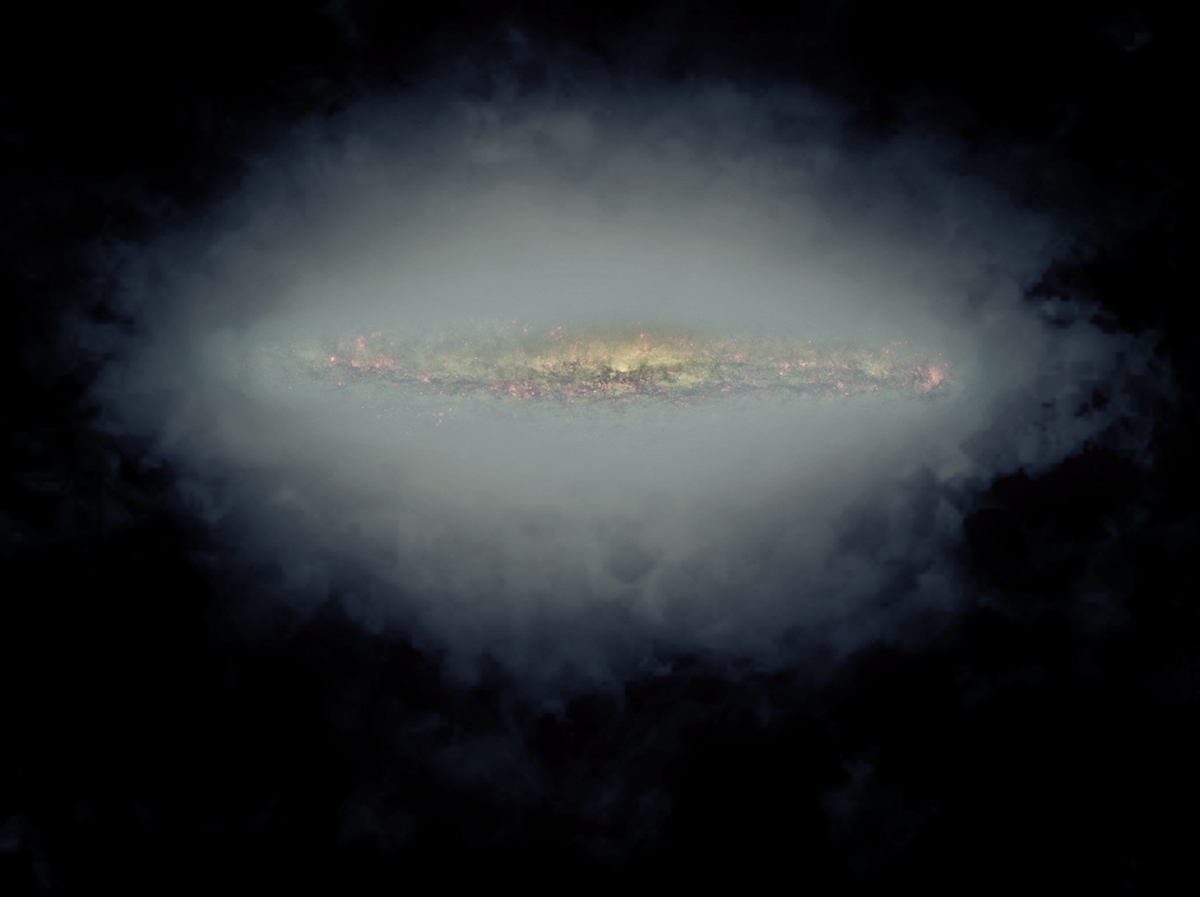