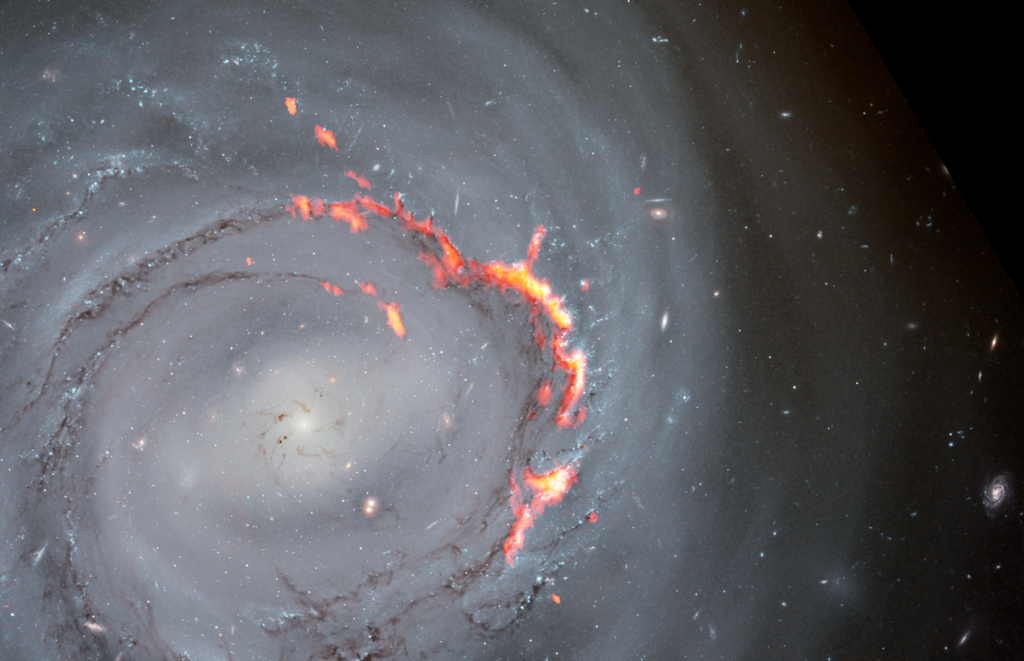 A new study from scientists using the Atacama Large Millimeter/submillimeter Array (ALMA) suggests that previously displaced gases can re-accrete onto galaxiesGalaxyA large body of gas, dust, stars, and their companions (Planets, asteroids, moons, etc.) held together by their mutual gravitational attraction. They are grouped into three main categories: spiral galaxies, elliptical galaxies, and irregular galaxies. (see below) Another class of galaxies is peculiar galaxies, which are thought to be distorted versions of normal galaxies. , potentially slowing down the process of galaxy death caused by ram pressure stripping, and creating unique structures more resistant to its effects.

“Much of the previous work on ram pressure stripped galaxies is focused on the material that gets stripped out of galaxies. In this new work we see some gas that rather than being thrown out of the galaxy never to return is instead moving like a boomerang, being ejected out but then circling around and falling back to its source,” said William Cramer, an astronomer at Arizona State University and the lead author on the new study. “By combining Hubble and ALMA data at very high resolution, we are able to prove that this process is happening.”

Ram pressure stripping refers to the process that displaces gas from galaxies, leaving them without the material needed to form new starsStarA giant ball of hot gas that creates and emits its own radiation through nuclear fusion.. As galaxies move through their galaxy clusters, hot gas known as the intra-cluster medium—or, the space between—acts like a forceful wind, pushing gases out of the traveling galaxies. Over time, this leads to the starvation and “death” of once-active star-forming galaxies. Because ram pressure stripping can speed up the normal life cycle of galaxies and alter the amount of molecular gas within them, it is of particular interest to scientists studying the life, maturation, and death of galaxies.

“We’ve seen in simulations that not all of the gas being pushed by ram pressure stripping escapes the galaxy because it has to reach escape velocity in order to actually escape and not fall back. The re-accretion that we’re seeing, we believe is from clouds of gas that were pushed out of the galaxy by ram pressure stripping, and didn’t achieve escape velocity, so they’re falling back,” said Jeff Kenney, an astronomer at Yale University, and the co-author on the study. “If you’re trying to predict how fast a galaxy is going to stop forming stars over time and transform into a red, or dead galaxy, then you want to understand how effective ram pressure is at stripping the gas out. If you don’t know that gas can fall back onto the galaxy and continue to recycle and form new stars, you’re going to overpredict the quenching of the stars. Having proof of this process means more accurate timelines for the lifecycle of galaxies.”

The new study focuses on NGC 4921—a barred spiral galaxy and the largest spiral galaxy in the Coma Cluster—located roughly 320 million light-years from Earth in the constellation Coma Berenices. NGC 4921 is of particular interest to scientists studying the effects of ram pressure stripping because evidence of both the process and its aftermath is abundant.

“Ram pressure triggers star formation on the side where it is having the greatest impact on the galaxy,” said Cramer. “It’s easy to identify in NGC 4921 because there are many young blue stars on the side of the galaxy where it’s occurring.”

Kenney added that ram pressure stripping in NGC 4921 has created a strong, visible line between where dust still exists in the galaxy and where it doesn’t. “There is a strong dust line  present, and beyond that there’s almost no gas in the galaxy. We think that that part of the galaxy has been almost completely cleaned out by ram pressure.”

Using ALMA’s Band 6 receiver, scientists were able to resolve carbon monoxide, the key to “seeing” both those areas of the galaxy devoid of gas, as well as those areas where it is re-accreting. “We know that the majority of molecular gas in galaxies is in the form of hydrogen, but molecular hydrogen is very difficult to observe directly,” said Cramer. “Carbon monoxide is commonly used as a proxy for studying molecular gas in galaxies because it is much easier to observe.”

The ability to see more of the galaxy, even at its faintest, unveiled interesting structures likely created in the process of gas displacement, and further immune to its effects. “Ram pressure appears to form unique structures, or filaments in galaxies that are clues as to how a galaxy evolves under a ram pressure wind. In the case of NGC 4921, they bear a striking resemblance to the famous nebula, the Pillars of Creation, although on a much more massive scale,” said Cramer. “We think that they are supported by magnetic fields which are preventing them from being stripped away with the rest of the gas.”

Observations revealed that the structures are more than just wisps of gas and dust; the filaments have mass and a lot of it. “These filaments are heavier and stickier—they hold on to their material more tightly than the rest of the galaxy’s interstellar medium can do—and they seem to be connected to that big dust ridge both in space and in velocity,” said Kenney. “They’re more like molasses than smoke. If you just blow on something that is smoke, the smoke is light, and it disperses and goes in all directions. But this is much heavier than that.”

Although a significant breakthrough, the results of the study are only a starting point for Cramer and Kenney, who examined one small part of just one galaxy. “If we want to predict the death rate of galaxies, and the birthrate of new stars, we need to understand if and how much of the material that forms stars, originally lost to ram pressure, is actually recycled back,” said Cramer. “These observations are of just one quadrant of NGC 4921. There is likely even more gas falling back into other quadrants. While we have confirmed that some stripped gas can ‘rain’ back down, we need more observations to quantify how much gas falls back and how many new stars form as a result.”

“A fascinating study, demonstrating the power of ALMA and the benefit of combining its observations with those of a telescope at other wavelengths,” added Joseph Pesce, NRAO/ALMA program officer at the NSF. “Ram pressure stripping is an important phenomenon for galaxies in clusters, and understanding the process better allows us to understand galaxy evolution—and nature—better.”

The results of the study will be published in an upcoming edition of The Astrophysical Journal.

About ALMA
The Atacama Large Millimeter/submillimeter Array (ALMA), an international astronomy facility, is a partnership of the European Organisation for Astronomical Research in the Southern Hemisphere (ESO), the U.S. National Science Foundation (NSF) and the National Institutes of Natural Sciences (NINS) of Japan in cooperation with the Republic of Chile. ALMA is funded by ESO on behalf of its Member States, by NSF in cooperation with the National Research Council of Canada (NRC) and the Ministry of Science and Technology (MOST) and by NINS in cooperation with the Academia Sinica (AS) in Taiwan and the Korea Astronomy and Space Science Institute (KASI). 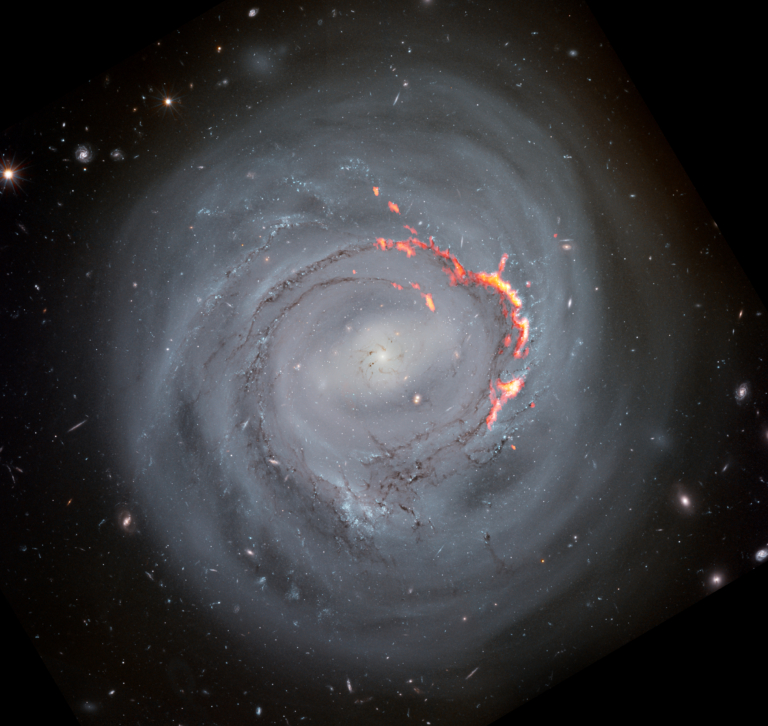 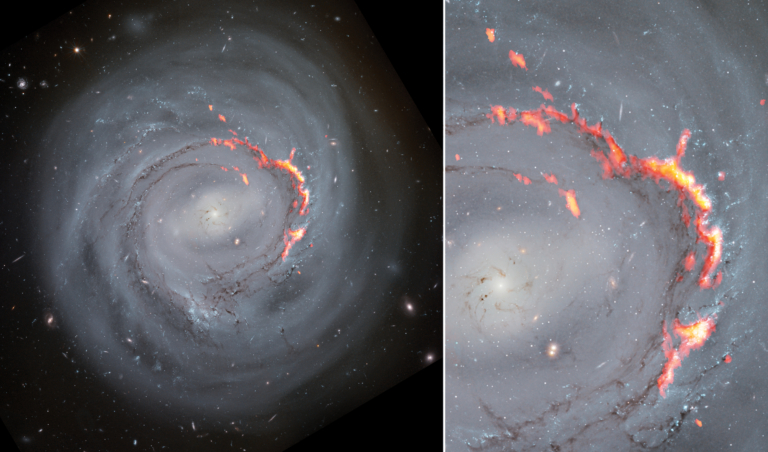 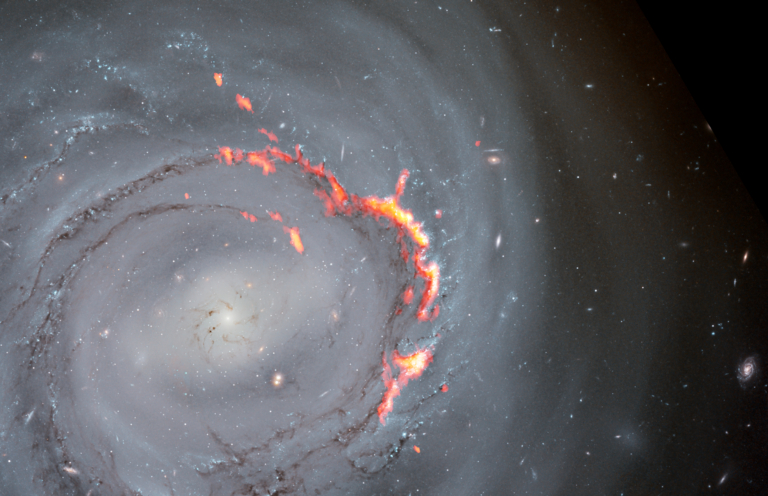