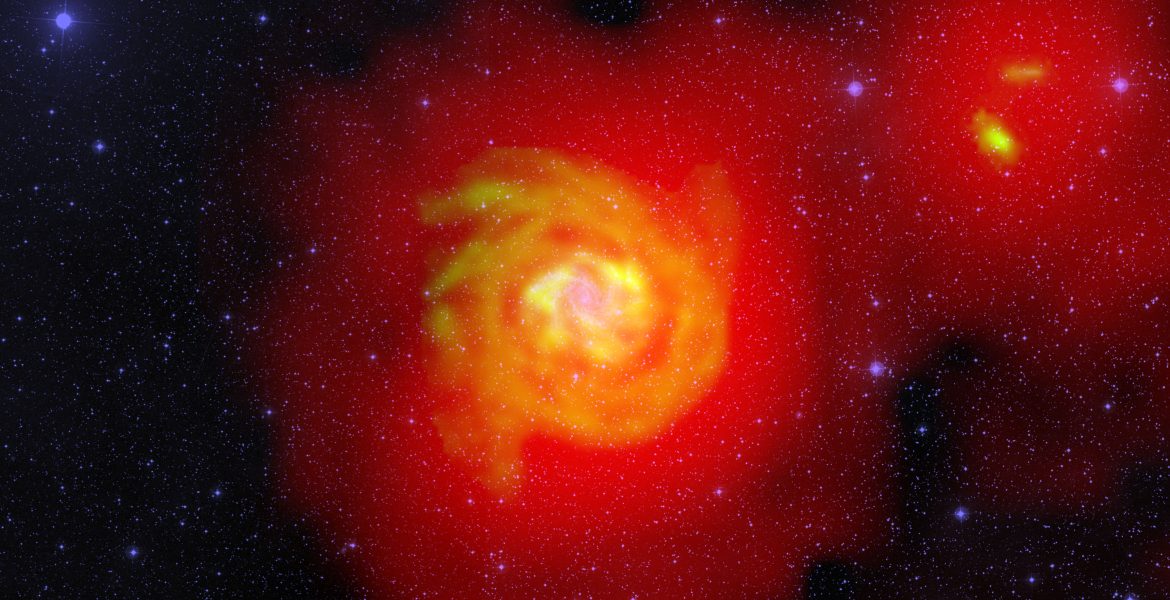 Using the National Science Foundation’s Robert C. Byrd Green Bank Telescope (GBT), astronomer D.J. Pisano from West Virginia University has discovered what could be a never-before-seen river of hydrogen flowing through space. This very faint, very tenuous filament of gas is streaming into the nearby galaxy NGC 6946 and may help explain how certain spiral galaxies keep up their steady pace of star formation.

“We knew that the fuel for star formation had to come from somewhere. So far, however, we’ve detected only about 10 percent of what would be necessary to explain what we observe in many galaxies,” said Pisano. “A leading theory is that rivers of hydrogen – known as cold flows – may be ferrying hydrogen through intergalactic space, clandestinely fueling star formation. But this tenuous hydrogen has been simply too diffuse to detect, until now.”

Spiral galaxies, like our own Milky Way, typically maintain a rather tranquil but steady pace of star formation. Others, like NGC 6946, which is located approximately 22 million light-years from Earth on the border of the constellations Cepheus and Cygnus, are much more active, though less-so than more extreme starburst galaxies. This raises the question of what is fueling the sustained star formation in this and similar spiral galaxies.

Earlier studies of the galactic neighborhood around NGC 6946 with the Westerbork Synthesis Radio Telescope (WSRT) in the Netherlands have revealed an extended halo of hydrogen (a feature commonly seen in spiral galaxies, which may be formed by hydrogen ejected from the disk of the galaxy by intense star formation and supernova explosions). A cold flow, however, would be hydrogen from a completely different source: gas from intergalactic space that has never been heated to extreme temperatures by a galaxy’s star birth or supernova processes.

Using the GBT, Pisano was able to detect the glow emitted by neutral hydrogen gas connecting NGC 6946 with its cosmic neighbors. This signal was simply below the detection threshold of other telescopes. The GBT’s unique capabilities, including its immense single dish, unblocked aperture, and location in the National Radio Quiet Zone, enabled it to detect this tenuous radio light.

Astronomers have long theorized that larger galaxies could receive a constant influx of cold hydrogen by syphoning it off other less-massive companions.

In looking at NGC 6946, the GBT detected just the sort of filamentary structure that would be present in a cold flow, though there is another probable explanation for what has been observed. It’s also possible that sometime in the past this galaxy had a close encounter and passed by its neighbors, leaving a ribbon of neutral atomic hydrogen in its wake.

If that were the case, however, there should be a small but observable population of stars in the filaments. Further studies will help to confirm the nature of this observation and could shine light on the possible role that cold flows play in the evolution of galaxies.

These results are published in the Astronomical Journal. 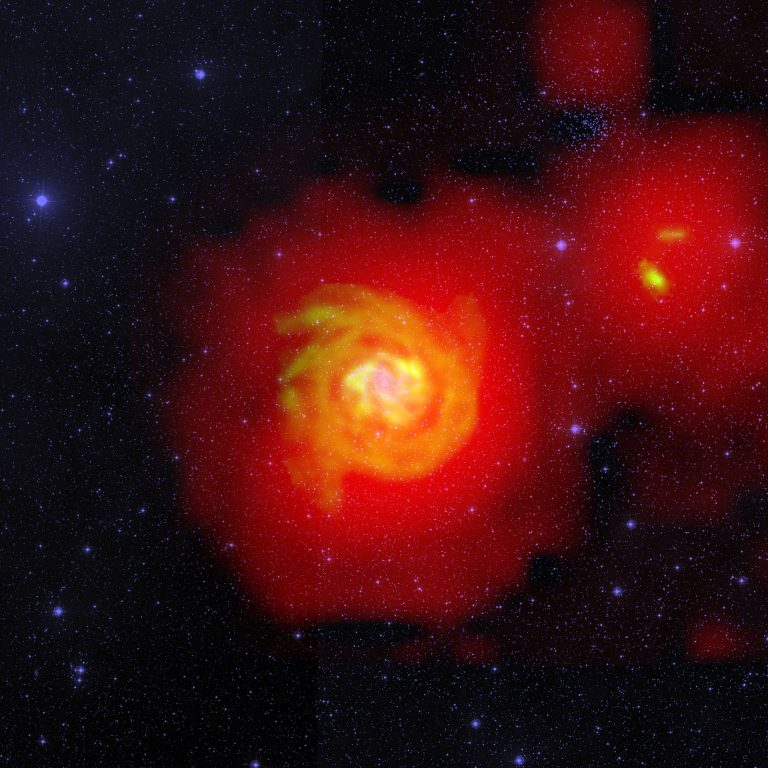 This composite image contains three distinct features: the bright star-filled central region of galaxy NGC 6946 in optical light (blue), the dense hydrogen tracing out the galaxy’s sweeping spiral arms and galactic halo (orange), and the extremely diffuse and extended field of hydrogen engulfing NGC 6946 and its companions (red). The new GBT data show the faintly glowing hydrogen bridging the gulf between the larger galaxy and its smaller companions. This faint structure is precisely what astronomers expect to appear as hydrogen flows from the intergalactic medium into galaxies or from a past encounter between galaxies.
Credit: D.J. Pisano (WVU); B. Saxton (NRAO/AUI/NSF); Palomar Observatory – Space Telescope Science Institute 2nd Digital Sky Survey (Caltech); Westerbork Synthesis Radio Telescope 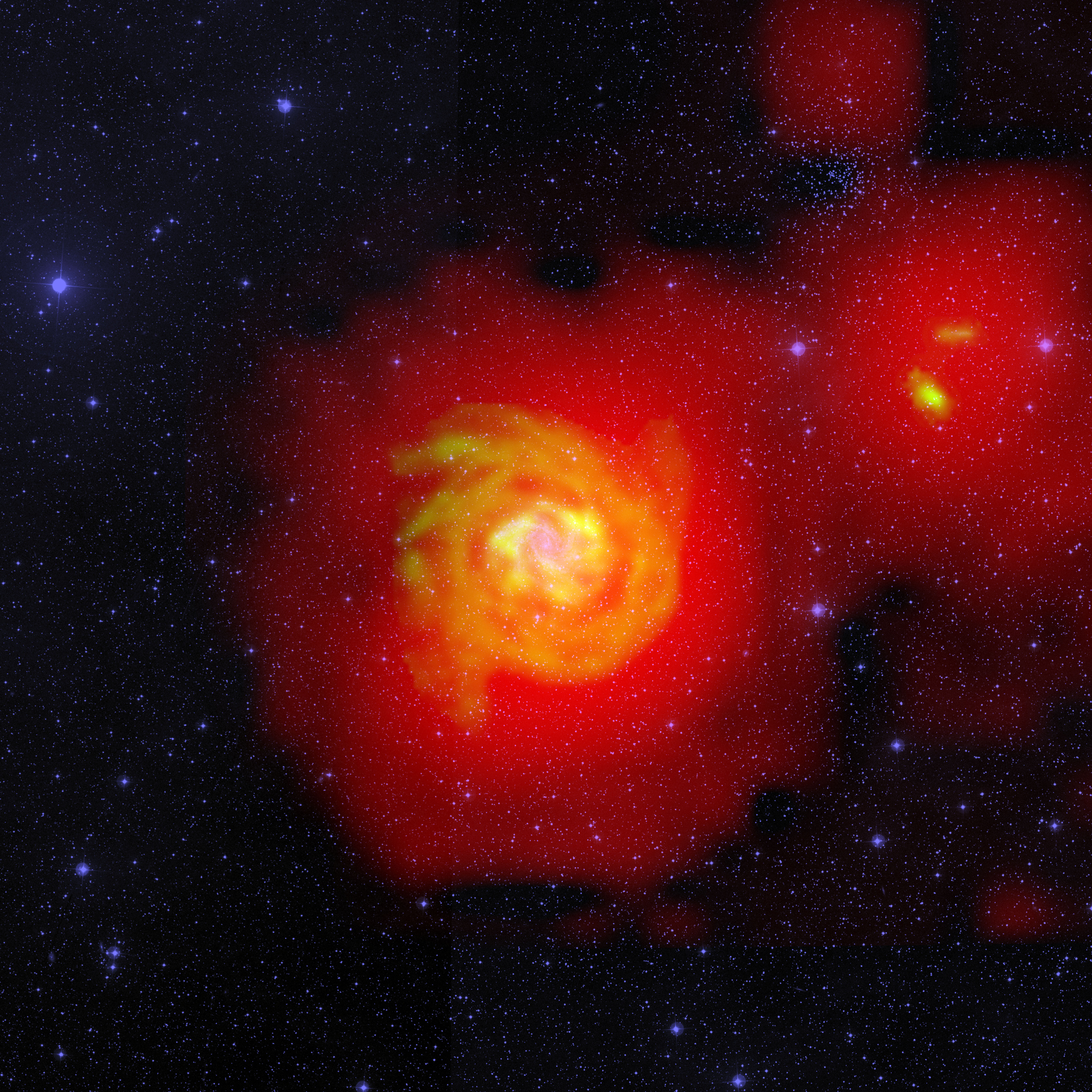