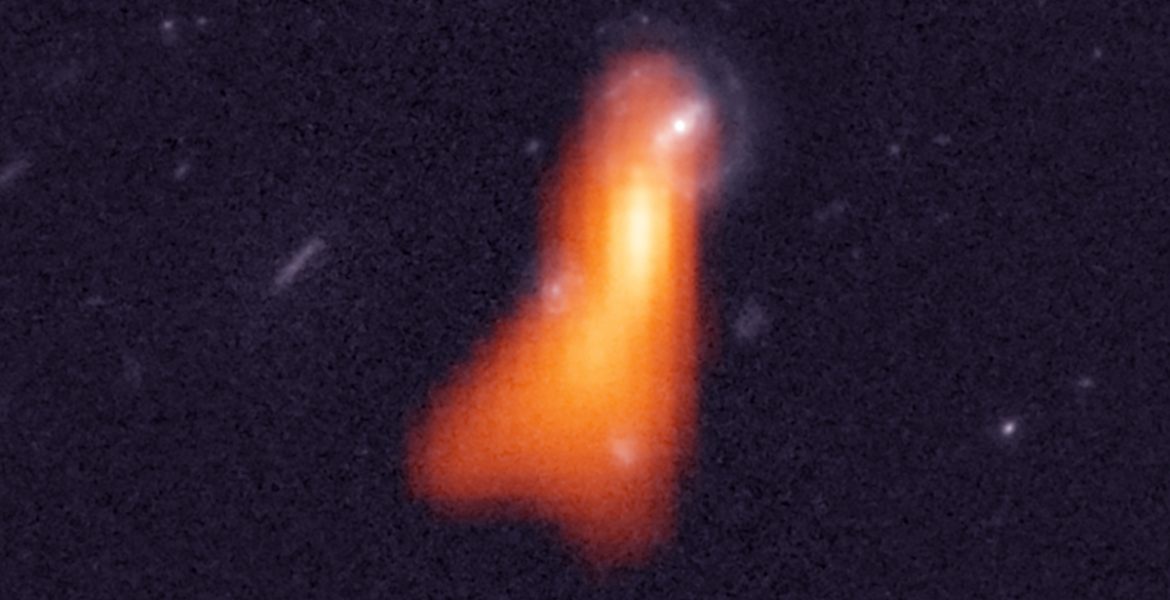 Astronomers have used new capabilities of the National Science Foundation’s Karl G. Jansky Very Large Array (VLA) to open a whole new realm of research into how galaxies evolve and interact with their surroundings over cosmic time. They detected the faint radio emission from atomic hydrogen, the most abundant element in the Universe, in a galaxy nearly 5 billion light-years from Earth.

“This almost doubles the distance record for this type of observation, and promises key new insights into how galaxies draw in the gas, process it, and lose it as they evolve,” said Ximena Fernandez, of Rutgers University. “As we look farther out in distance, we’re looking farther back in time, so this new capability allows us to gain previously unobtainable information about how galaxies develop,” she added.

The scientists detected the radio “fingerprint” of hydrogen in a galaxy called COSMOS J100054. The discovery came from the first 178 hours of observation in a program called the COSMOS HI Large Extragalactic Survey, or CHILES, led by Jacqueline van Gorkom of Columbia University. The CHILES project eventually will use more than 1,000 hours of VLA observing time. The detection was made possible by the improved capabilities of the VLA provided by a 10-year upgrade project completed in 2012.

“The new electronic systems in the upgraded VLA were essential to this work. Without the upgrade, this discovery would have been impossible. This detection is the first of what we believe will be many more to come, making an important contribution to our understanding of how galaxies evolve,” said Emmanuel Momjian, of the National Radio Astronomy Observatory.

Hydrogen gas is the raw material for making stars. Throughout their lives, galaxies draw in the gas, which eventually is incorporated into stars. In furious bursts of star formation, stellar winds and supernova explosions can blow gas out of the galaxy and rob it of the material needed for further star formation.

In order to understand how these processes develop, astronomers need images of the gas in and near galaxies of different ages. Until now, technical limitations of radio telescopes prevented them from detecting atomic hydrogen emission at the distances needed to see the gas in galaxies distant enough to provide the required “lookback time.” The CHILES project will achieve this to distances out to about 6 billion light-years.

COSMOS J100054 is in a region of sky extensively studied with multiple telescopes as part of an international project called the Cosmological Evolution Survey (COSMOS). Data from that survey allowed the scientists to glean additional information about the galaxy. In addition, Hansung Gim of the University of Massachusetts, Amherst, used the Large Millimeter Telescope in Mexico to detect Carbon Monoxide (CO) in the galaxy. The CO detection gave the researchers key information about gas in the galaxy that is composed of molecules, rather than of individual atoms. Molecular gas is considered a necessary precursor to star formation.

The scientists found that COSMOS J100054 is a massive, barred spiral galaxy that may be interacting with a small neighbor galaxy. With an amount of hydrogen nearly 100 billion times the mass of the Sun, the galaxy is forming the equivalent of about 85 suns every year.

“This is the first time we have been able to observe both the emission from atomic hydrogen and from carbon monoxide in a galaxy that is beyond our local Universe,” Gim said. “Now that we have this capability, we soon will be able to start filling in gaps in our knowledge about the properties of galaxies at specific ages. This is an important development,” he added.

The research was the work of an international team of astronomers from North America, South America, Europe, Asia and Australia. The scientists are reporting their results in the Astrophysical Journal Letters. 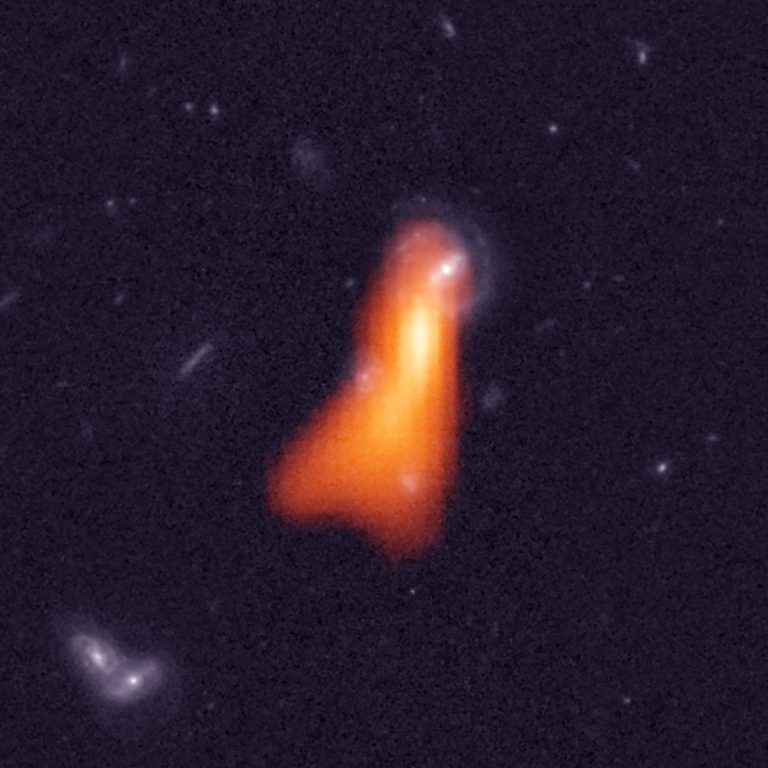 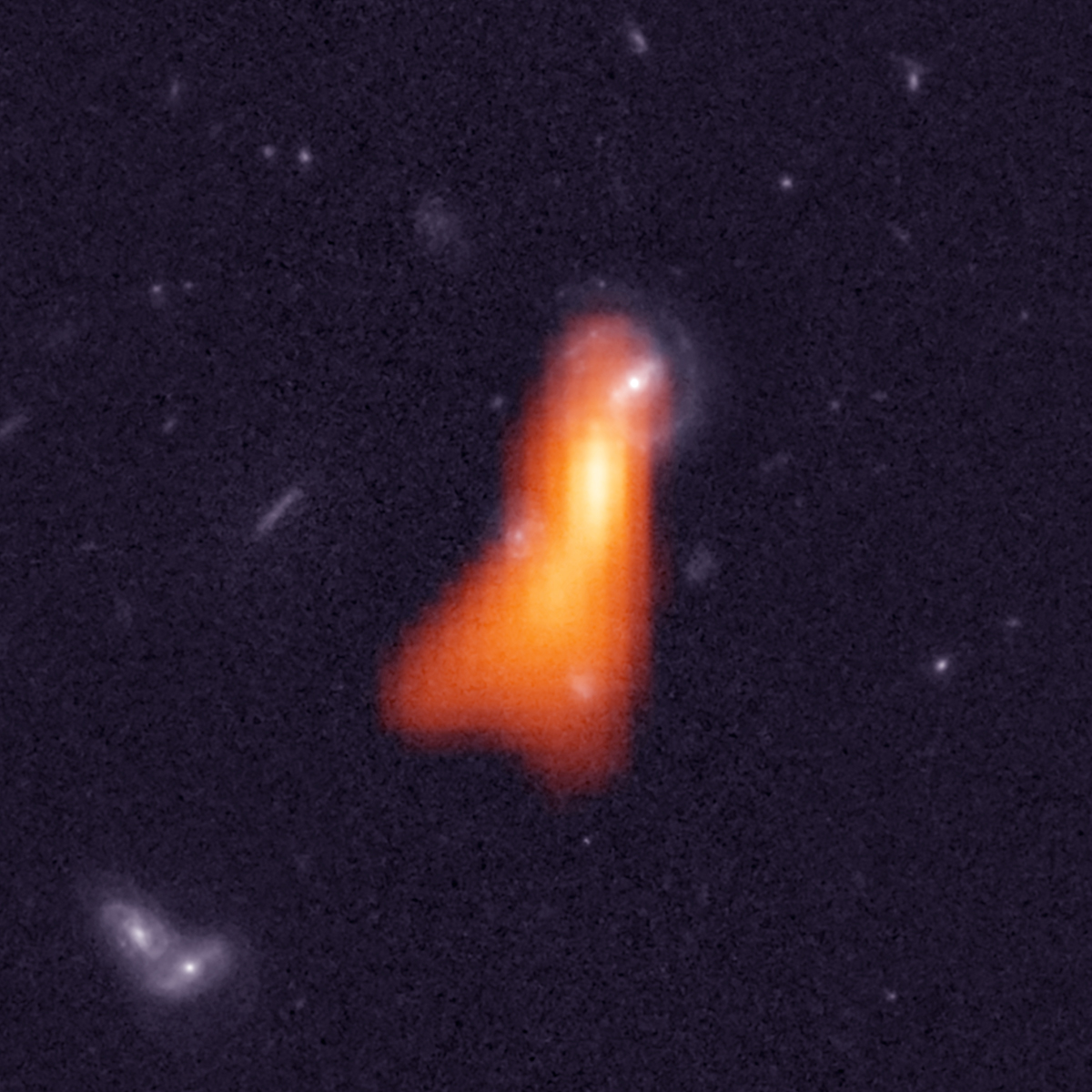