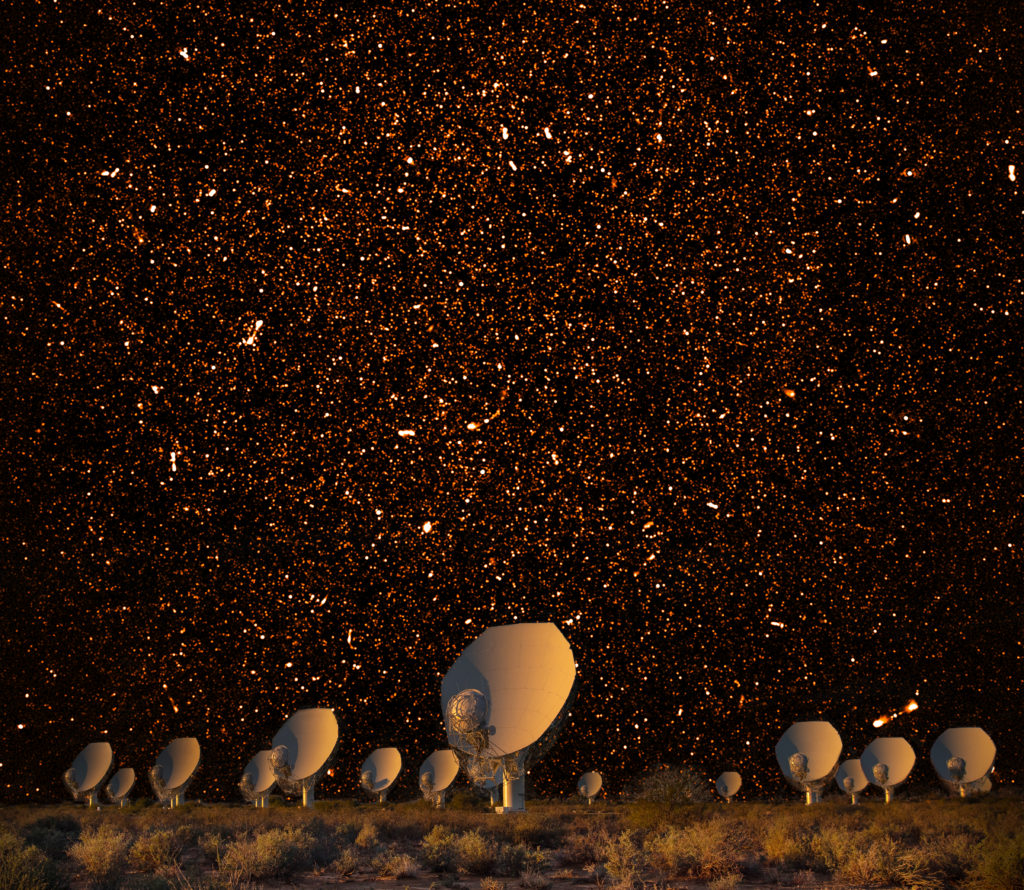 Look at this new radio image covered with dots, each of which is a distant galaxy! The brightest spots are galaxies that are powered by supermassive black holes and shine bright in radio light. But what makes this image special are the numerous faint dots filling the sky. These are distant galaxies like our own that have never been observed in radio light before.

To learn about the star-formation history of the universe, we need to look back in time. Galaxies throughout the universe have been forming stars for the past 13 billion years. But most stars were born between 8 and 11 billion years ago, during an era called “cosmic noon”.

It has been a challenge for astronomers to study the faint light coming from this era. Optical telescopes can see very distant galaxies, but new stars are largely hidden inside dusty clouds of gas. Radio telescopes can see through the dust and observe the rare, bright starburst galaxiesStarburst GalaxyA bright galaxy in which many new stars are rapidly forming, up to 1000 times faster than star formation in the Milky Way. Often triggered by galaxy mergers and interactions. , but until now have not been sensitive enough to detect the signals from distant Milky Way-like galaxies that are responsible for most of the star formation in the universe.

An international team of astronomers using the South African Radio Astronomy Observatory (SARAO) MeerKAT telescope recently made the first radio observation sensitive enough to reveal these galaxies. “To make this image, we selected an area in the Southern Sky that contains no strong radio sources whose glare could blind a sensitive observation,” said Tom Mauch of SARAO in Cape Town, South Africa, who led the team whose results have been accepted for publication in The Astrophysical Journal.

The team used the 64 MeerKAT dishes to observe this area for a total of 130 hours. The resulting image shows a region of the sky that is comparable in area to five full Moons, containing tens of thousands of galaxies.

“Because radio waves travel at the speed of light, this image is a time machine that samples star formation in these distant galaxies over billions of years,” explained co-author James Condon of the National Radio Astronomy Observatory (NRAO) in Charlottesville, Virginia. “Because only short-lived stars that are less than 30 million years old send out radio waves, we know that the image is not contaminated by old stars. The radio light we see from each galaxy is therefore proportional to its star-forming rate at that moment in time.”

The astronomers want to use this image to learn more about star formation in the entire universe. “These first results indicate that the star-formation rate around cosmic noon is even higher than was originally expected,” said Allison Matthews, a graduate student at the University of Virginia and Grote Reber doctoral fellow at the NRAO. “Previous images could only detect the tip of the iceberg, the rare and luminous galaxies that produced only a small fraction of the stars in the universe. What we see now is the complete picture: these faint dots are the galaxies that formed most of the stars in the universe.”

“Only in the last few years technology has developed to the point that we can build magnificent telescopes like South Africa’s MeerKAT and have the computing power to create images like this one and get a real understanding of how the universe came to be the way it is,” added NRAO astronomer William Cotton. “The next generations of instruments, the Square Kilometer Array and the next generation Very Large Array should be even more spectacular.”

This research is presented in a paper titled “The 1.28 GHz MeerKAT DEEP2 Image,” by T. Mauch et al., accepted for publication in The Astrophysical Journal. Preprint: http://arxiv.org/abs/1912.06212 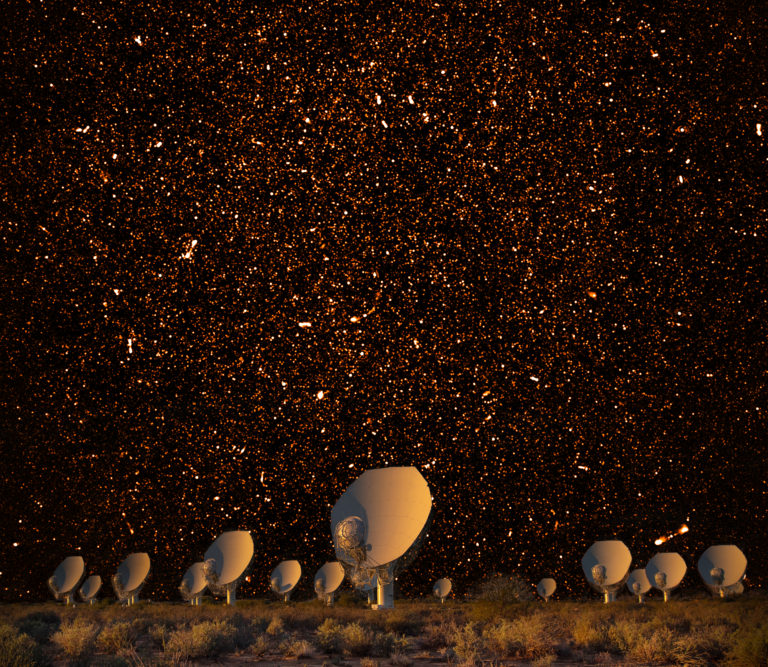 Composite view of an observation showing thousands of galaxies in radio light and the MeerKAT...Read More
Credit: SARAO; NRAO/AUI/NSF 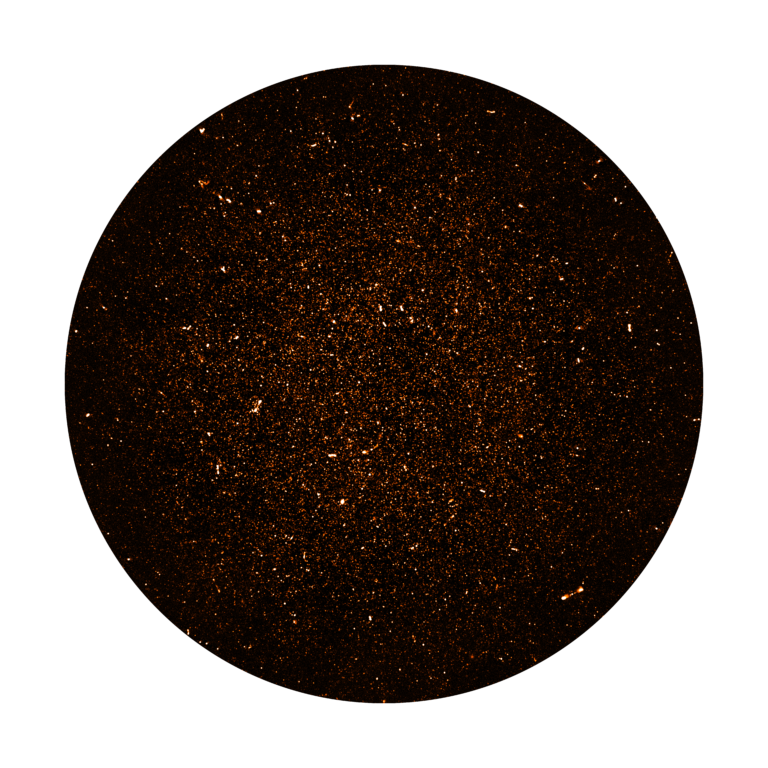 Thousands of galaxies are visible in this radio image covering a square degree of sky...Read More
Credit: SARAO; NRAO/AUI/NSF 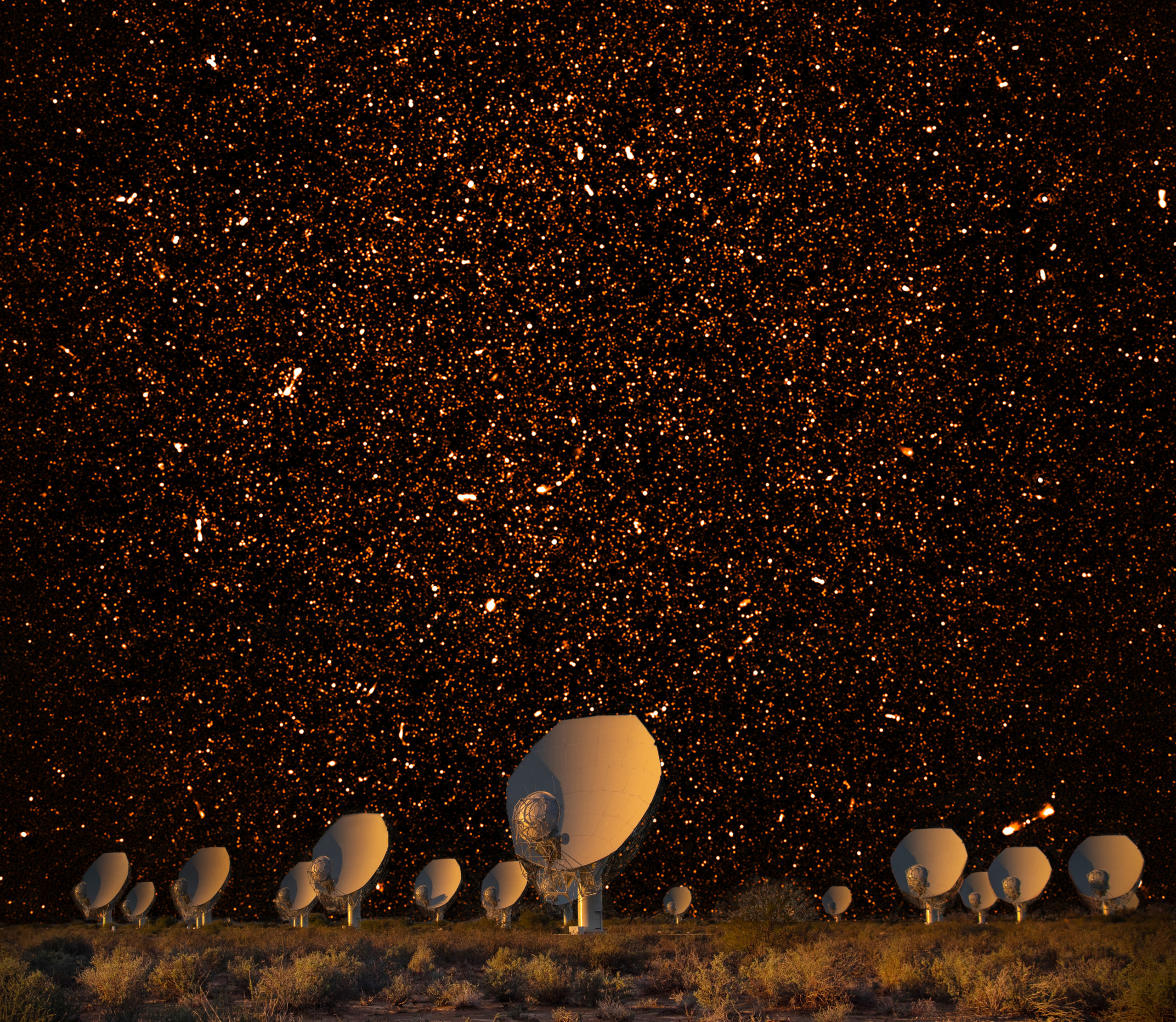