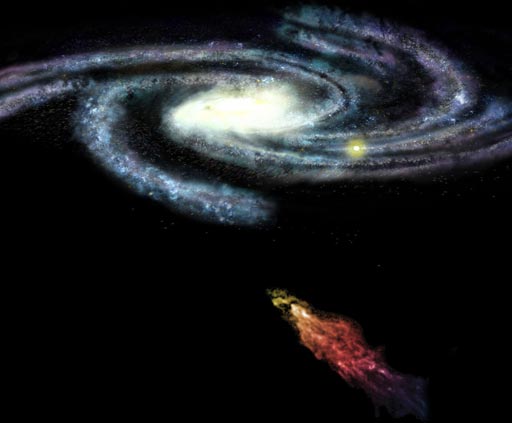 Doom may be averted for the Smith Cloud, a gigantic streamer of hydrogen gas that is on a collision course with the Milky Way Galaxy. Astronomers using the National Science Foundation’s Karl G. Jansky Very Large Array (VLA) and Robert C. Byrd Green Bank Telescope (GBT) have discovered a magnetic field deep in the cloud’s interior, which may protect it during its meteoric plunge into the disk of our Galaxy.

This discovery could help explain how so-called high velocity clouds (HVCs) remain mostly intact during their mergers with the disks of galaxies, where they would provide fresh fuel for a new generation of stars.

Currently, the Smith Cloud is hurtling toward the Milky Way at more than 150 miles per second and is predicted to impact in approximately 30 million years. When it does, astronomers believe, it will set off a spectacular burst of star formation. But first, it has to survive careening through the halo, or atmosphere, of hot ionized gas surrounding the Milky Way.

“The million-degree upper atmosphere of the Galaxy ought to destroy these hydrogen clouds before they ever reach the disk, where most stars are formed,” said Alex Hill, an astronomer at Australia’s Commonwealth Scientific and Industrial Research Organization (CSIRO) and lead author of a paper published in the Astrophysical Journal. “New observations reveal one of these clouds in the process of being shredded, but a protective magnetic field shields the cloud and may help it survive its plunge.”

Many hundreds of HVCs zip around our Galaxy, but their obits seldom correspond to the rotation of the Milky Way. This leads astronomers to believe that HVCs are the left-over building blocks of galaxy formation or the splattered remains of a close galactic encounter billions of years ago.

Though massive, the gas that makes up HVCs is very tenuous, and computer simulations predict that they lack the necessary heft to survive plunging through the halo and into the disk of the Milky Way.

“We have long had trouble understanding how HVCs reach the Galactic disk,” said Hill.  “There’s good reason to believe that magnetic fields can prevent their ‘burning up’ in the halo like a meteorite burning up in Earth’s atmosphere.”

Despite being the best evidence yet for a magnetic field inside an HVC, the origin of the Smith Cloud’s field remains a mystery. “The field we observe now is too large to have existed in its current state when the cloud was formed,” said Hill. “The field was probably magnified by the cloud’s motion through the halo.”

Earlier research indicates the Smith Cloud has already survived punching through the disk of our Galaxy once and — at about 8,000 light-years from the disk — is just beginning its re-entry now.

“The Smith Cloud is unique among high-velocity clouds because it is so clearly interacting with and merging with the Milky Way,” said Felix J. Lockman, an astronomer at the National Radio Astronomy Observatory (NRAO) in Green Bank, W.Va. “Its comet-like appearance indicates it’s already feeling the Milky Way’s influence.”

Since the Smith Cloud appears to be devoid of stars, the only way to observe it is with exquisitely sensitive radio telescopes, like the GBT, which can detect the faint emission of neutral hydrogen. If it were visible with the naked eye, the Smith Cloud would cover almost as much sky as the constellation Orion.

When the Smith Cloud eventually merges with the Milky Way, it could produce a bright ring of stars similar to the one relatively close to our Sun known as Gould’s Belt.

“Our Galaxy is in an incredibly dynamic environment,” concludes Hill, “and how it interacts with that environment determines whether stars like the Sun will continue to form.”

Artist's impression of the Smith Cloud's plunge into the disk of the Milky Way, which it's destined to hit in approximately 30 million years. The cloud, seen in orange and yellow at bottom of the image, is actual data from the Robert C. Byrd Green Bank Telescope (GBT).
Credit: Bill Saxton (NRAO/AUI/NSF)