A pair of Galaxy Zoo participants combing through archived VLA images spotted a strange-looking galaxy, which turned out to inhabit a previously undiscovered cluster.

The GBT achieved "first light" with a new and improved multi-pixel radio camera named MUSTANG-2. The instrument can make faster, more comprehensive observations of everything from solar system objects to the most far-flung galaxies in the observable Universe.

A study that combined two spectroscopy techniques has shed new light on a galaxy's gas makeup.

A GBT/Arecibo radar image of the Moon is part of a new exhibit on Apollo at the Smithsonian's National Air and Space Museum.

After a pair of citizen scientists, participants in the online Radio Galaxy Zoo project, identified an unusual-looking galaxy, astronomers discovered that the galaxy resides in a previously unknown cluster of galaxies. The astronomers now see galaxies like the one identified by the citizen scientists as signposts for finding more clusters. In December of 2013, Ivan Terentev and Tim Matorny, Russian amateurs scanning images from the Radio Galaxy Zoo, noted a galaxy, now called RGZ-CL J0823.2+0333, with an unusual shape. The Radio Galaxy Zoo uses images from a sky survey done in the 1990s with the National Science Foundation’s Very Large Array (VLA). The VLA image was in an overlay with data from the WISE infrared satellite. Following up on the discovery, astronomers working with the project used additional images to see that the galaxy’s radio-emitting “tails” are bent to a wide angle, similar to a “C” shape. Further analysis showed that the galaxy, some 1.2 billion light-years from Earth, is part of a cluster of galaxies. That cluster now is named the Matorny-Terentev Cluster RGZ-CL J0823+0333. The bending of the galaxy’s tails, the astronomers say, is because the galaxy is moving through tenuous material between the cluster’s galaxies. “This shows us that we can find more ‘hidden’ galaxy clusters by identifying these wide-tailed galaxies,” said Julie Banfield of the Australian National University, lead author of a paper in the Monthly Notices of the Royal Astronomical Society. Matorny and Terentev are co-authors of the paper, along with an international team of astronomers. Matorny and Terentev were excited by their discovery. “I am still amazed and feel more motivated to look for stunning new radio galaxies,” Matorny said. Terentev added, “I got a chance to see the whole process of science … and I have been a part of it!” 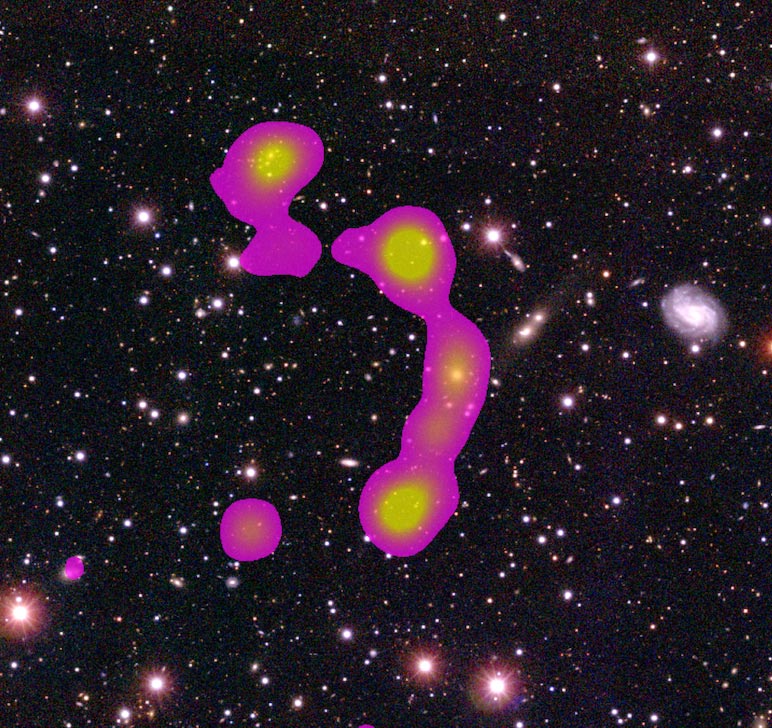 Radio image of the galaxy RGZ-CL J0823.2+0333, overlaid on a visible-light image from the Sloan Digital Sky Survey.

One of the world’s most sensitive radio telescopes just got an upgrade. Astronomers installed and successfully tested a new multi-pixel radio camera, dubbed MUSTANG-2, on the National Science Foundation’s Green Bank Telescope (GBT). On May 23, this next-generation instrument captured its “first light” image of the region surrounding Sagittarius A*, the supermassive black hole at the center of our galaxy. Unlike traditional single-dish radio observations that produce images one pixel at a time, MUSTANG-2 captures wide-field, multi-pixel images in much the same way a digital camera takes photos in visible light. This cutting-edge technology was first employed on the GBT with an earlier version of the MUSTANG camera, but MUSTANG-2 is outfitted with more detectors—and more sensitive detectors—than its predecessor. The MUSTANG-2’s array of 211 feed horns provides an incredible field-of-view 4 arcminutes across. To minimize radio noise emitted by the receivers themselves, the entire MUSTANG-2 system is cooled to less than one degree Kelvin, much more frigid than the average radio astronomy receiver. These features enable it to make faster, crisper observations of our solar system, star-forming regions in the Milky Way, and the interactions of galaxies and galaxy clusters near the edge of the observable Universe. “Our new instrument gives the GBT capabilities that are not available with any other telescope,” said National Radio Astronomy Observatory (NRAO) astronomer Jay Lockman. “MUSTANG-2 has opened an entirely new window on the Universe for radio astronomy.” Astronomers itching to snap pictures with the GBT’s new camera will only have to wait a little while longer. Following a brief evaluation period, the MUSTANG-2 will be up and running for scientific observations in the fall. 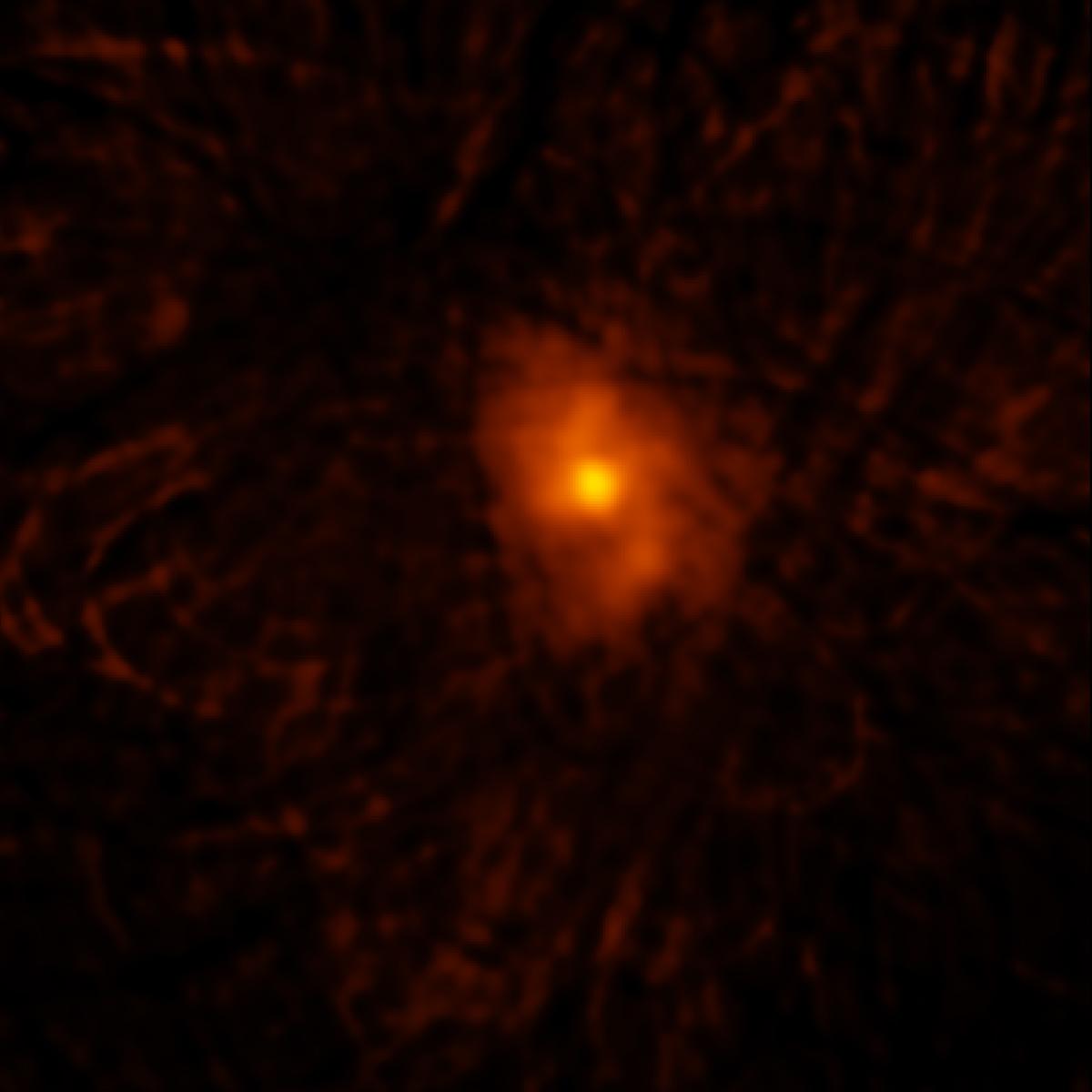 GBT "first light" image of the region surrounding Sagittarius A*, the supermassive black hole at the center of our galaxy. Astronomers made the image with the MUSTANG-2 multi-pixel radio camera.

Astronomers usually study molecular gas—the fuel for star formation—using one of two methods: either by investigating a galaxy’s “emission” or its “absorption.” The former technique involves looking at the natural radio emission from the gas that permeates the galaxy and its expansive halo. The latter method examines the light from more distant objects, like a bright quasar, that gets absorbed as it passes through the galaxy. Researchers using the Atacama Large Millimeter/submillimeter Array (ALMA) combined these two techniques for the first time to study a galaxy very nearly on a direct line of sight with the quasar PKS0439-433. Their work constitutes the most comprehensive study of molecular gas in a galaxy to date. “Previously, quasar absorption studies ‘blinded’ telescopes to the less intense and much more diffuse emission signal from the galaxy,” said Marcel Neeleman, with the University of California’s Lick Observatory and lead author on a paper published in Astrophysical Journal Letters. In this study, astronomers were able to directly detect the faint emission signal from carbon monoxide in the galaxy. By comparing this emission to the absorption signal from the quasar, the researchers found that the strongest absorption did not occur in the disk of the galaxy. Instead, most of the quasar’s light was absorbed by the diffuse gas surrounding the galaxy—gas that would be nearly impossible to detect through other means. The astronomers’ results suggest that far from the galaxy, there is a significant amount of molecular gas that is not actually part of the galaxy, but bound to it. “We may be witnessing the recycling of material that, in a few billion years, will again trigger a burst of star formation,” concluded Neeleman. The nearby galaxy, known as PKS0439_008_04, is approximately 1.4 billion light-years from Earth. The more distant quasar is approximately 7.3 billion light-years from Earth. Both are in the direction of the constellation Caelum. 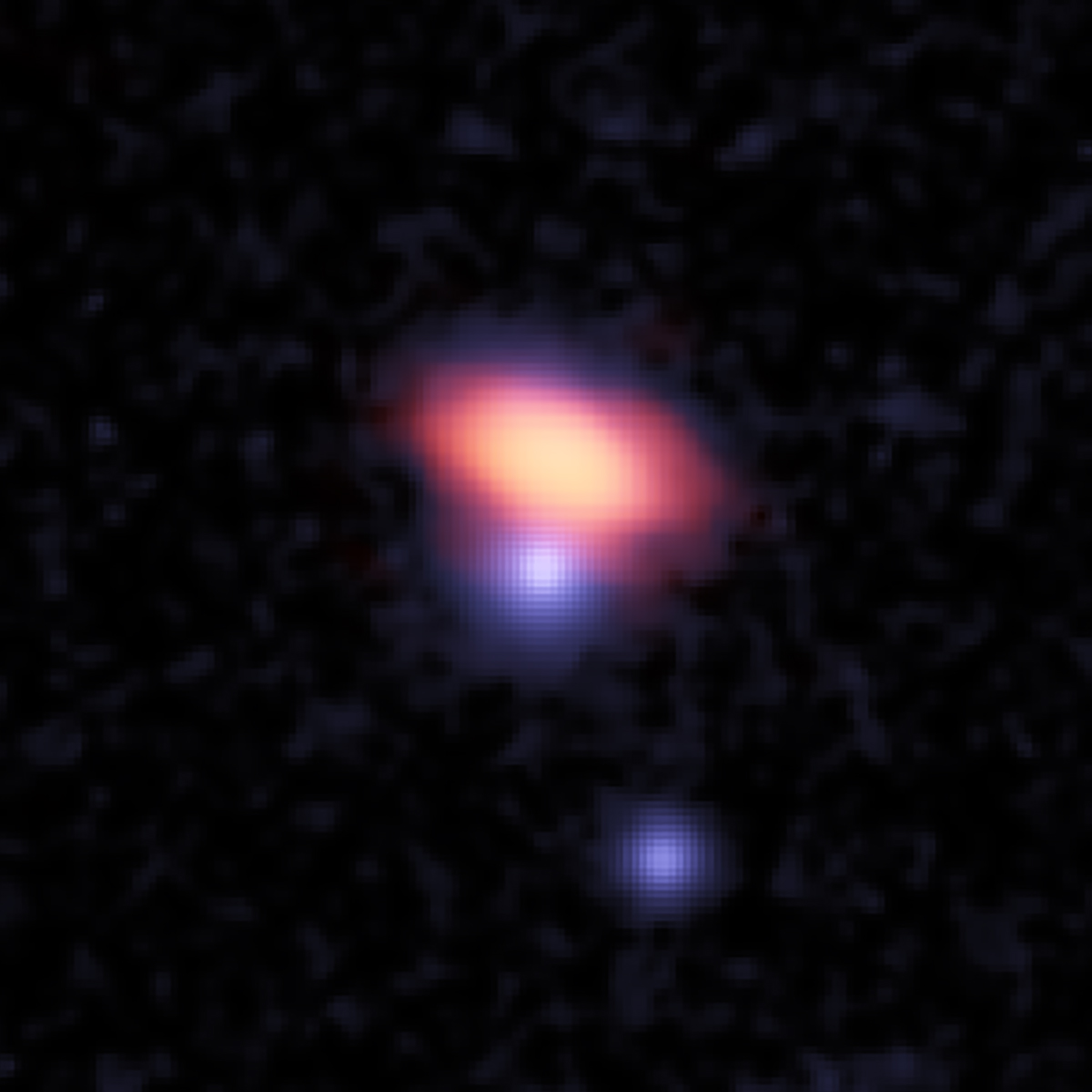 Composite ALMA and optical image showing glowing emission from carbon monoxide (red) in galaxy PKS0439_008_04. The more distant quasar, PKS0439-433 (central blue feature), revealed through absorption in the visible spectrum the presence of an extended, diffuse halo of molecular gas surrounding the galaxy. The optical data are from the du Pont Telescope at the Las Campanas Observatory.

The Smithsonian’s National Air and Space Museum opened its new “Boeing Milestones of Flight Hall” Friday, July 1, and the Apollo Lunar Module is one of the centerpiece artifacts. The image behind the Lunar Module is a radar map of the Moon collected by Smithsonian scientists using the Arecibo radio telescope in Puerto Rico and the National Radio Astronomy Observatory’s Green Bank Telescope (GBT) in West Virginia. The view is of the Moon’s north pole at bottom center, with the side facing Earth falling away toward the top. Bright areas, often surrounding impact craters, are very rocky while the broad, darker areas are ancient lava flows. Because the radar provides its own illumination, areas near the pole that are never lit by the Sun can be mapped. These observations were funded in part by the NASA Solar System Observations Program, and carried out with colleagues from NASA Goddard Space Flight Center, Cornell University, Arecibo Observatory, and the NRAO in Green Bank. 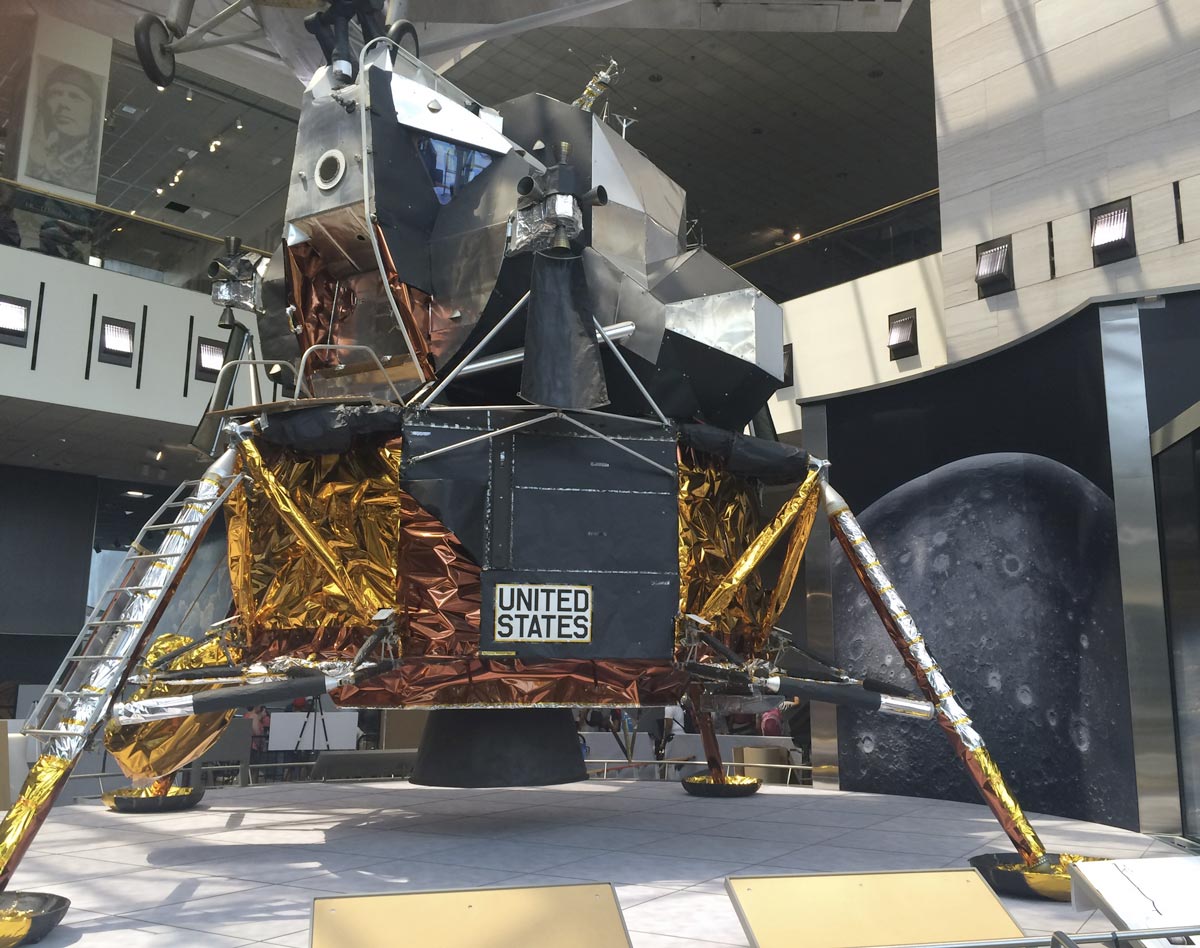 With the Apollo Lunar Module in the foreground, the combined GBT/Arecibo radar image of the Moon is shown in the background. This is part of the new "Boeing Milestones of Flight Hall" at Smithsonian’s National Air and Space Museum.