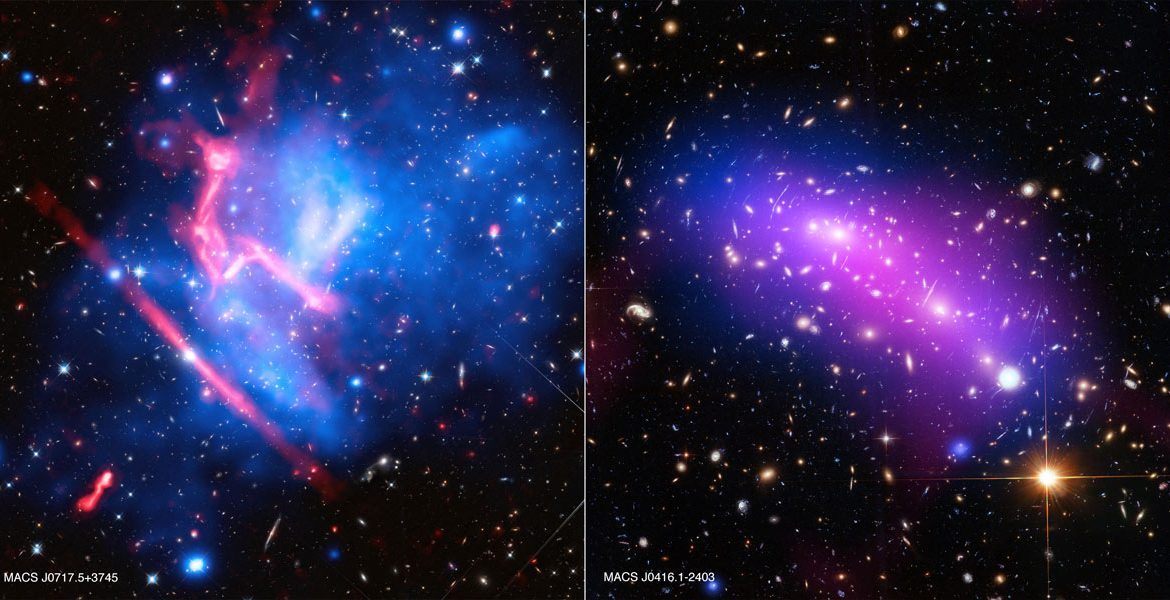 Galaxy clusters are enormous collections of hundreds or even thousands of galaxies and vast reservoirs of hot gas embedded in massive clouds of dark matter, invisible material that does not emit or absorb light but can be detected through its gravitational effects. These cosmic giants are not merely novelties of size or girth – rather they represent pathways to understanding how our entire universe evolved in the past and where it may be heading in the future.

To learn more about clusters, including how they grow via collisions, astronomers have used some of the world’s most powerful telescopes, looking at different types of light. They have focused long observations with these telescopes on a half-dozen galaxy clusters. The name for this galaxy cluster project is the “Frontier Fields.”

The Chandra data shows gas in the merging clusters with temperatures of millions of degrees. The optical data shows galaxies in the clusters and other, more distant, galaxies lying behind the clusters. Some of these background galaxies are highly distorted because of gravitational lensing, the bending of light by massive objects. This effect can also magnify the light from these objects, enabling astronomers to study background galaxies that would otherwise be too faint to detect. Finally, the structures in the radio data trace enormous shock waves and turbulence. The shocks are similar to sonic booms, generated by the mergers of the clusters.

New results from multi-wavelength studies of MACS J0416 and MACS J0717, described in two separate papers, are included below.

An open question for astronomers about MACS J0416 has been: are we seeing a collision in these clusters that is about to happen or one that has already taken place? Until recently, scientists have been unable to distinguish between these two explanations. Now, the combined data from these telescopes is providing new answers.

In MACS J0416 the dark matter (which leaves its gravitational imprint in the optical data) and the hot gas (detected by Chandra) line up well with each other. This suggests that the clusters have been caught before colliding. If the clusters were being observed after colliding, the dark matter and hot gas should separate from each other, as seen in the famous colliding cluster system known as the Bullet Cluster.

The cluster in the upper left contains a compact core of hot gas, most easily seen in a specially processed image, and also shows evidence of a nearby cavity, or hole, in the X-ray emitting gas. The presence of these structures also suggests that a major collision has not occurred recently; otherwise these features would likely have been disrupted. Finally, the lack of sharp structures in the radio image provides more evidence that a collision has not yet occurred.

In Very Large Array images of this cluster, seven gravitationally-lensed sources are observed, all point sources or sources that are barely larger than points. This makes MACS J0717 the cluster with the highest number of known lensed radio sources. Two of these lensed sources are also detected in the Chandra image. The researchers are only aware of two other lensed X-ray sources behind a galaxy cluster.

All of the lensed radio sources are galaxies located between 7.8 and 10.4 billion light years from Earth. The brightness of the galaxies at radio wavelengths shows that they contain stars forming at high rates. Without the amplification by lensing, some of these radio sources would be too faint to detect with typical radio observations. The two lensed X-ray sources detected in the Chandra images are likely active galactic nuclei (AGN) at the centers of galaxies. AGN are compact, luminous objects powered by gas heated to millions of degrees as it falls toward supermassive black holes. These two X-ray sources would have been detected without lensing but would have been two or three times fainter.

Release and more images from the Chandra X-Ray Center. 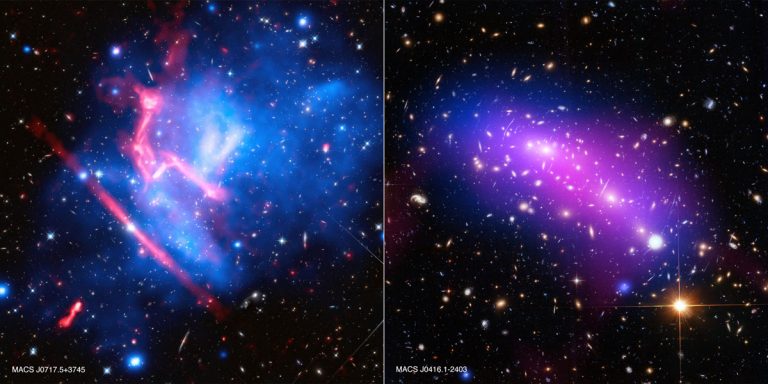 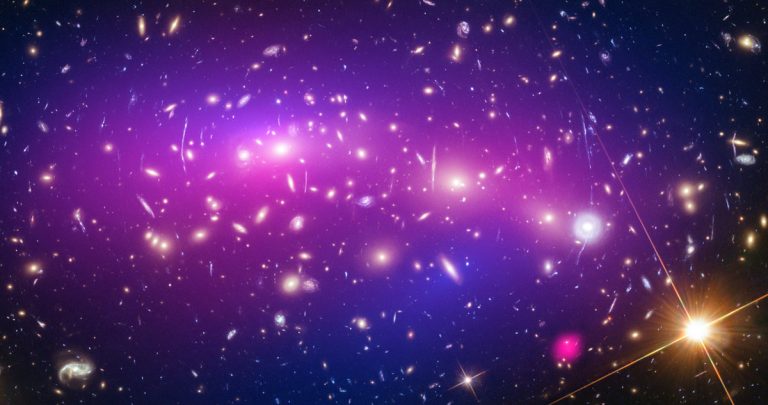 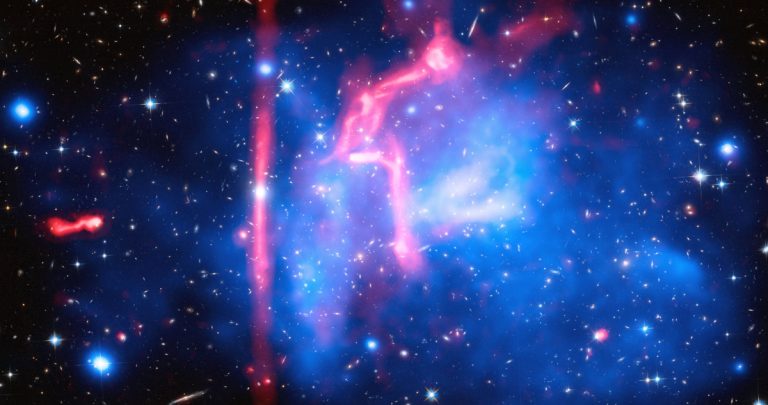 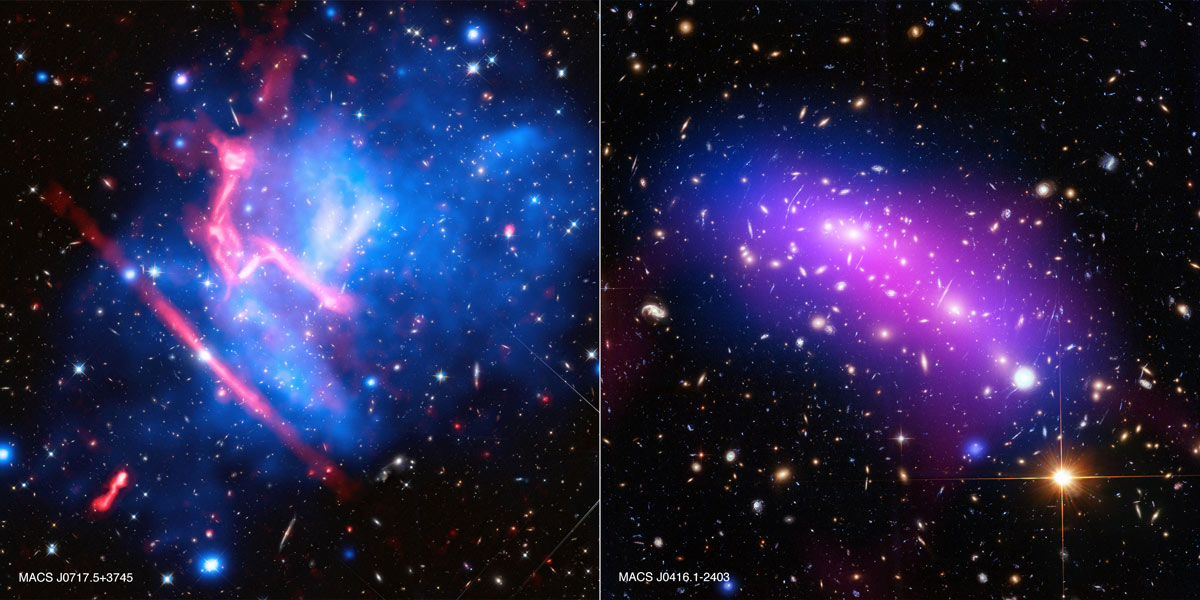 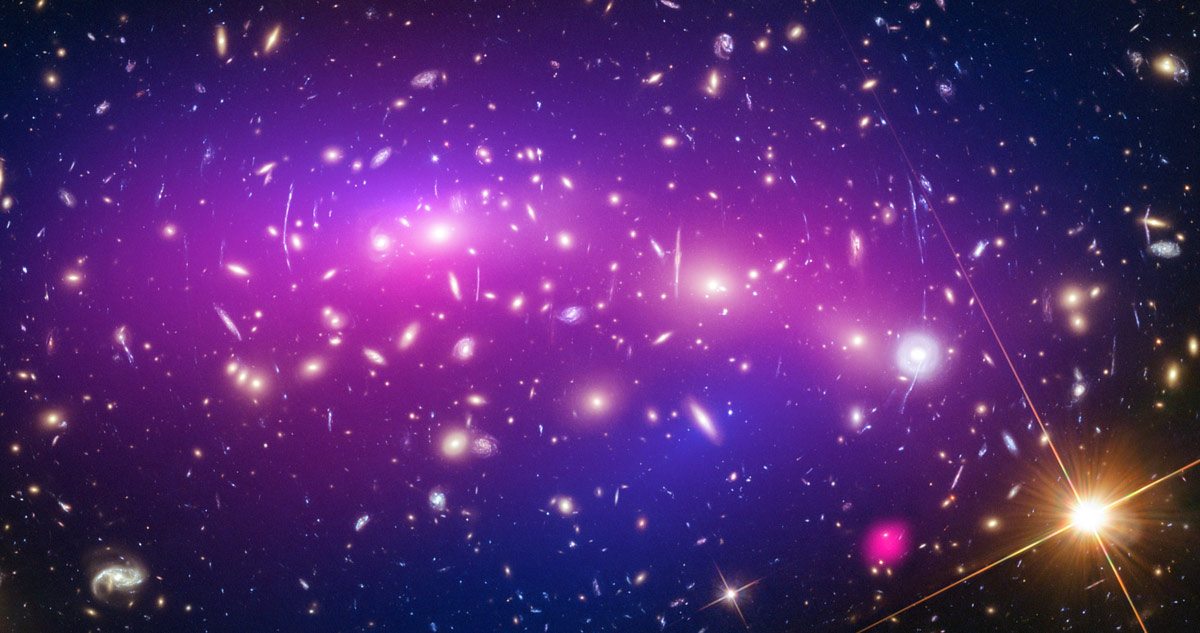 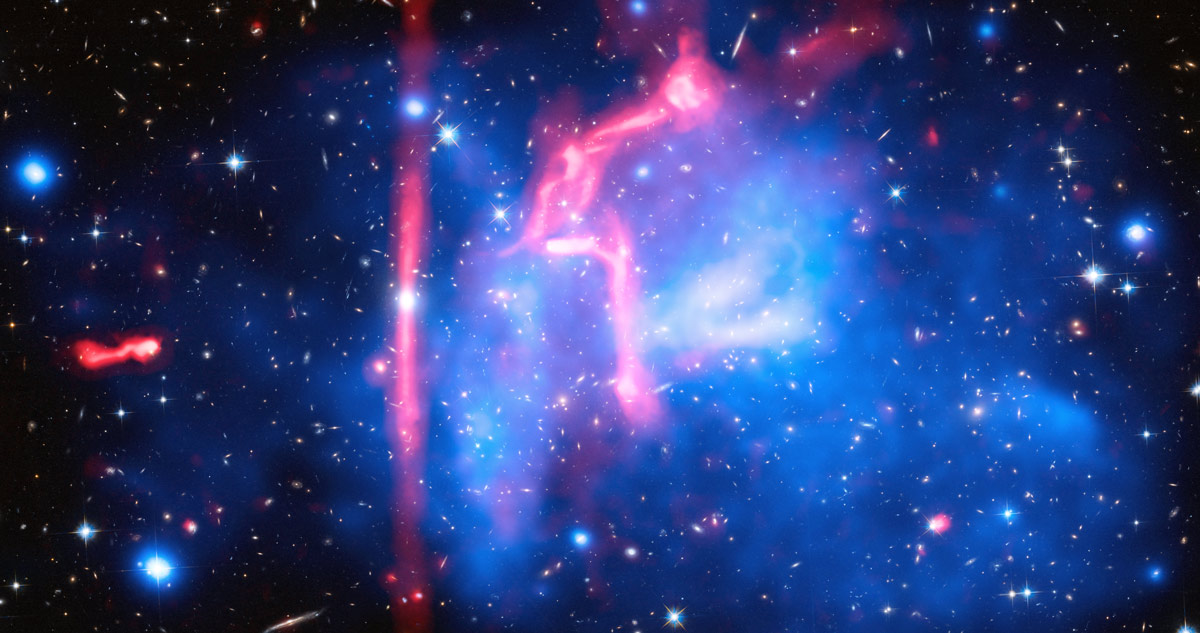