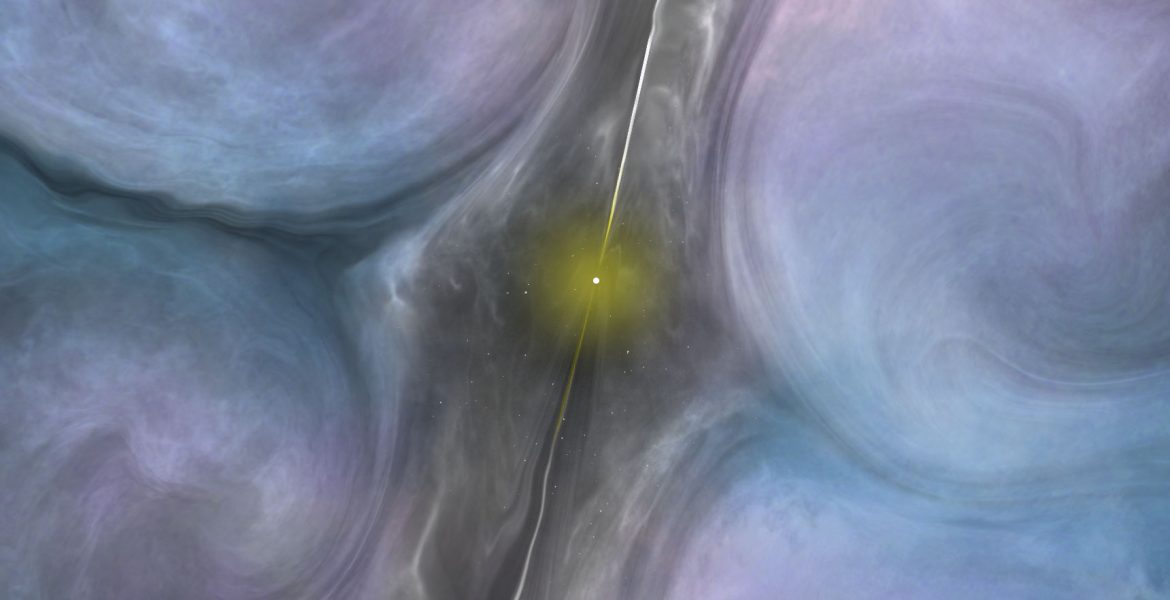 High-energy jets powered by supermassive black holes can blast away a galaxy’s star-forming fuel, resulting in so-called “red and dead” galaxies: those brimming with ancient red stars yet containing little or no hydrogen gas to create new ones.

Now astronomers using the Atacama Large Millimeter/submillimeter Array (ALMA) have discovered that black holes don’t have to be nearly so powerful to shut down star formation. By observing the dust and gas at the center of NGC 1266, a nearby lenticular galaxy with a relatively modest central black hole, the astronomers have detected a “perfect storm” of turbulence that is squelching star formation in a region that would otherwise be an ideal star factory.

This turbulence is stirred up by jets from the galaxy’s central black hole slamming into an incredibly dense envelope of gas. This dense region, which may be the result of a recent merger with another smaller galaxy, blocks nearly 98 percent of material propelled by the jets from escaping the galactic center.

“Like an unstoppable force meeting an immovable object, the particles in these jets meet so much resistance when they hit the surrounding dense gas that they are almost completely stopped in their tracks,” said Katherine Alatalo, an astronomer with the California Institute of Technology in Pasadena and lead author on a paper published in the Astrophysical Journal. This energetic collision produces powerful turbulence in the surrounding gas, disrupting the first critical stage of star formation. “So what we see is the most intense suppression of star formation ever observed,” noted Alatalo.

Previous observations of NGC 1266 revealed a broad outflow of gas from the galactic center traveling up to 400 kilometers per second. Alatalo and her colleagues estimate that this outflow is as forceful as the simultaneous supernova explosion of 10,000 stars. The jets, though powerful enough to stir the gas, are not powerful enough to give it the velocity it needs to escape from the system.

“Another way of looking at it is that the jets are injecting turbulence into the gas, preventing it from settling down, collapsing, and forming stars,” said National Radio Astronomy Observatory astronomer and co-author Mark Lacy.

The region observed by ALMA contains about 400 million times the mass of our Sun in star-forming gas, which is 100 times more than is found in giant star-forming molecular clouds in our own Milky Way. Normally, gas this concentrated should be producing stars at a rate at least 50 times faster than the astronomers observe in this galaxy.

Previously, astronomers believed that only extremely powerful quasars and radio galaxies contained black holes that were powerful enough to serve as a star-forming “on/off” switch.

“The usual assumption in the past has been that the jets needed to be powerful enough to eject the gas from the galaxy completely in order to be effective at stopping start formation,” said Lacy.

To make this discovery, the astronomers first pinpointed the location of the far-infrared light being emitted by the galaxy. Normally, this light is associated with star formation and enables astronomers to detect regions where new stars are forming. In the case of NGC 1266, however, this light was coming from an extremely confined region at the center of the galaxy. “This very small area was almost too small for the infrared light to be coming from star formation,” noted Alatalo.

With ALMA’s exquisite sensitivity and resolution, and along with observations from CARMA (the Combined Array for Research in Millimeter-wave Astronomy), the astronomers were then able to trace the location of the very dense molecular gas at the galactic center. They found that the gas is surrounding this compact source of far-infrared light.

Under normal conditions, gas this dense would be forming stars at a very high rate. The dust embedded within this gas would then be heated by young stars and seen as a bright and extended source of infrared light. The small size and faintness of the infrared source in this galaxy suggests that NGC 1266 is instead choking on its own fuel, seemingly in defiance of the rules of star formation.

The astronomers also speculate that there is a feedback mechanism at work in this region. Eventually, the black hole will calm down and the turbulence will subside so star formation can begin anew. With this renewed star formation, however, comes greater motion in the dense gas, which then falls in on the black hole and reestablishes the jets, shutting down star formation once again.

NGC 1266 is located approximately 100 million light-years away in the constellation Eridanus. Leticular galaxies are spiral galaxies, like our own Milky Way, but they have little interstellar gas available to form new stars. 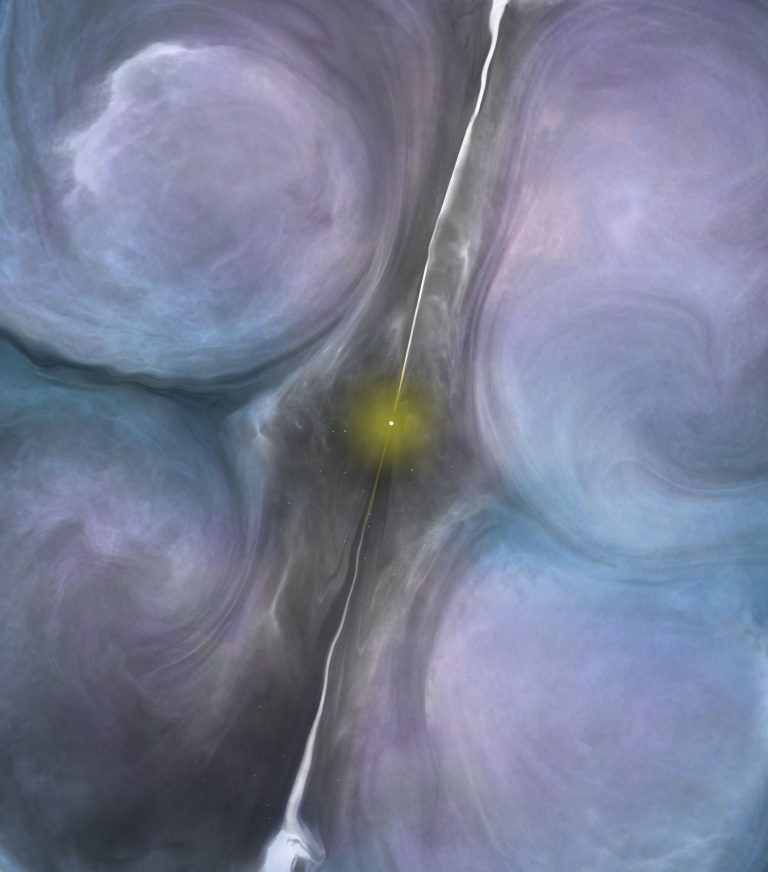 Artist impression of the central region of NGC 1266. The jets from the central black...Read More
Credit: B. Saxton (NRAO/AUI/NSF) 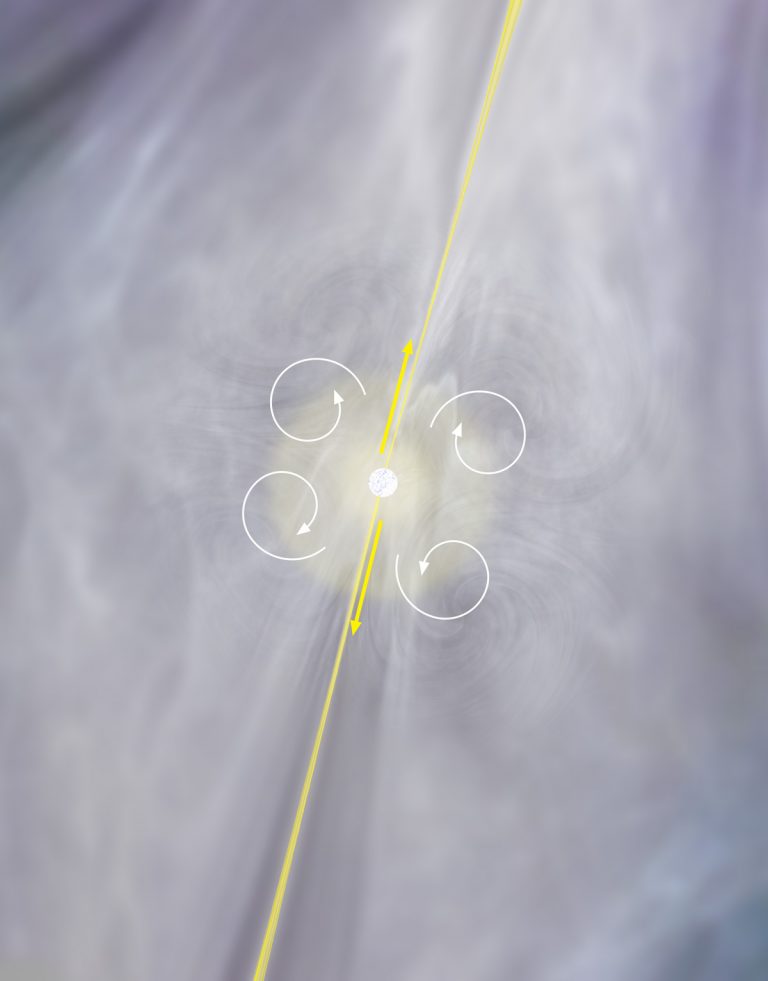 Artist illustration of the central region of NGC 1266 near its central black hole with...Read More
Credit: B. Saxton (NRAO/AUI/NSF) 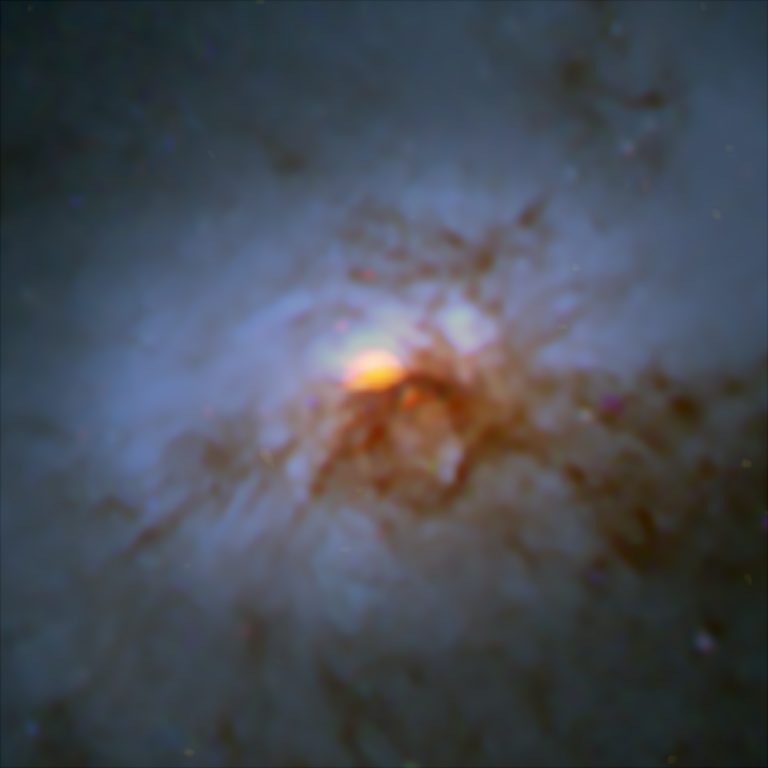 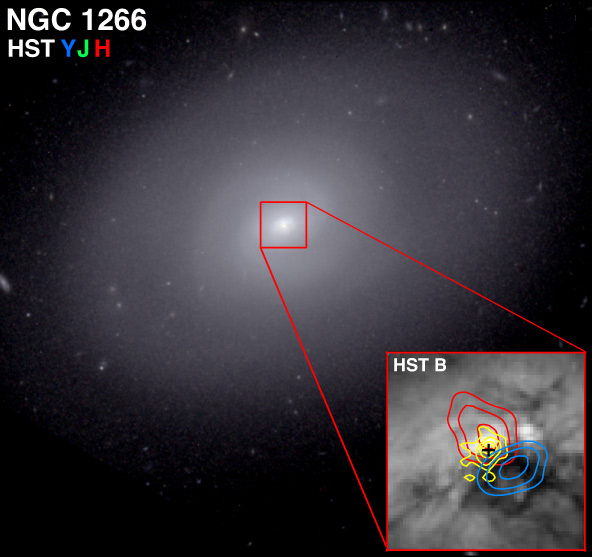 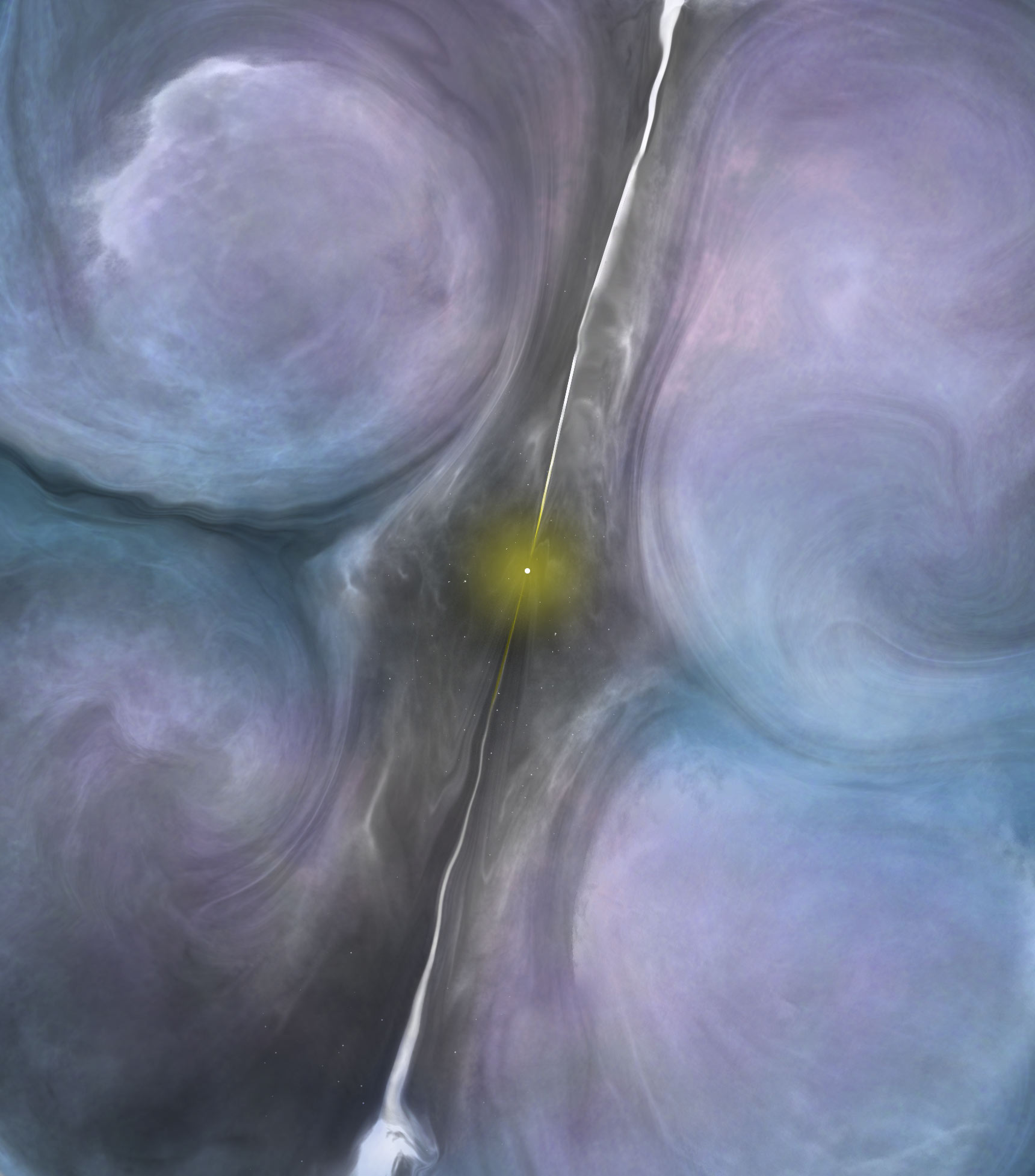 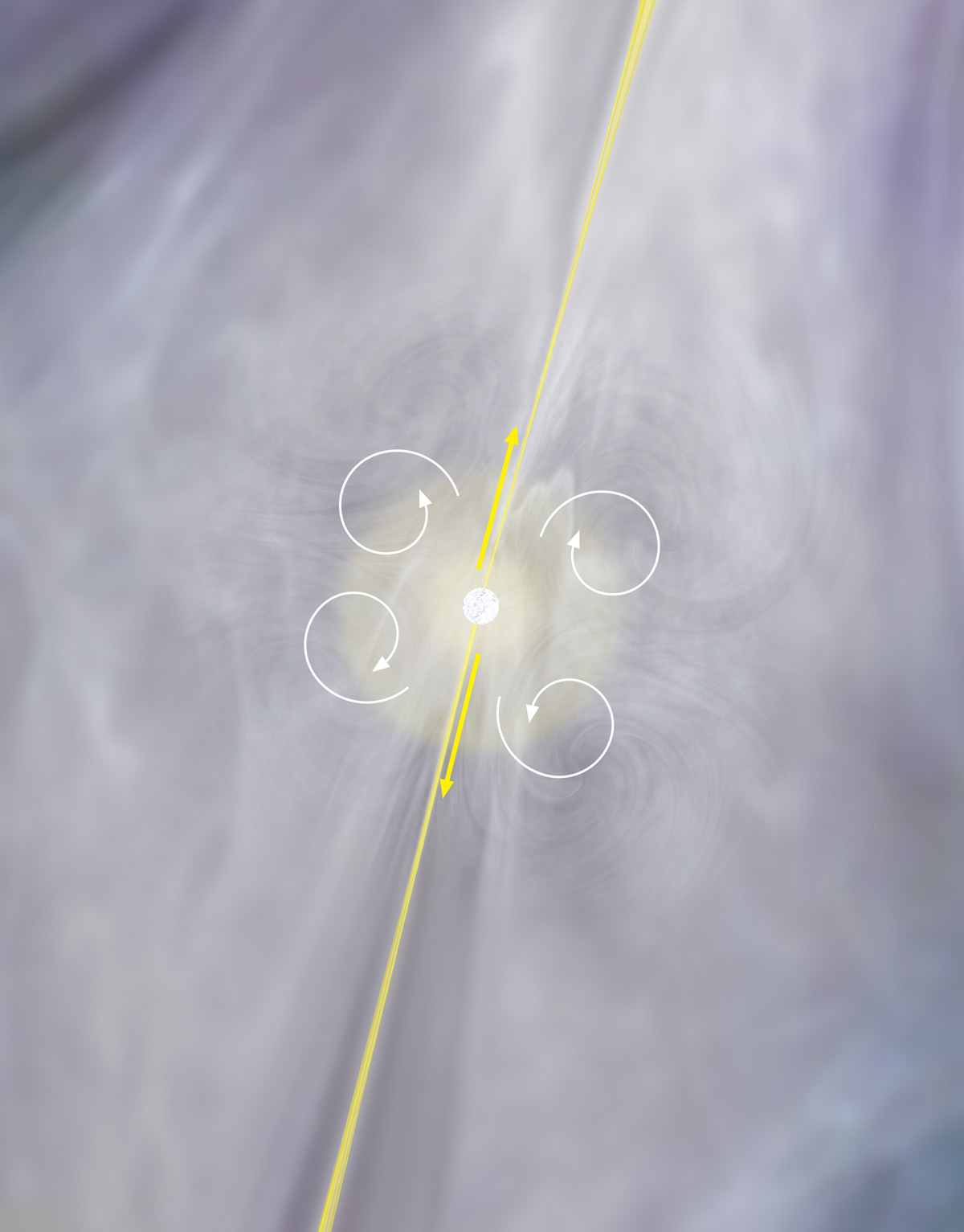 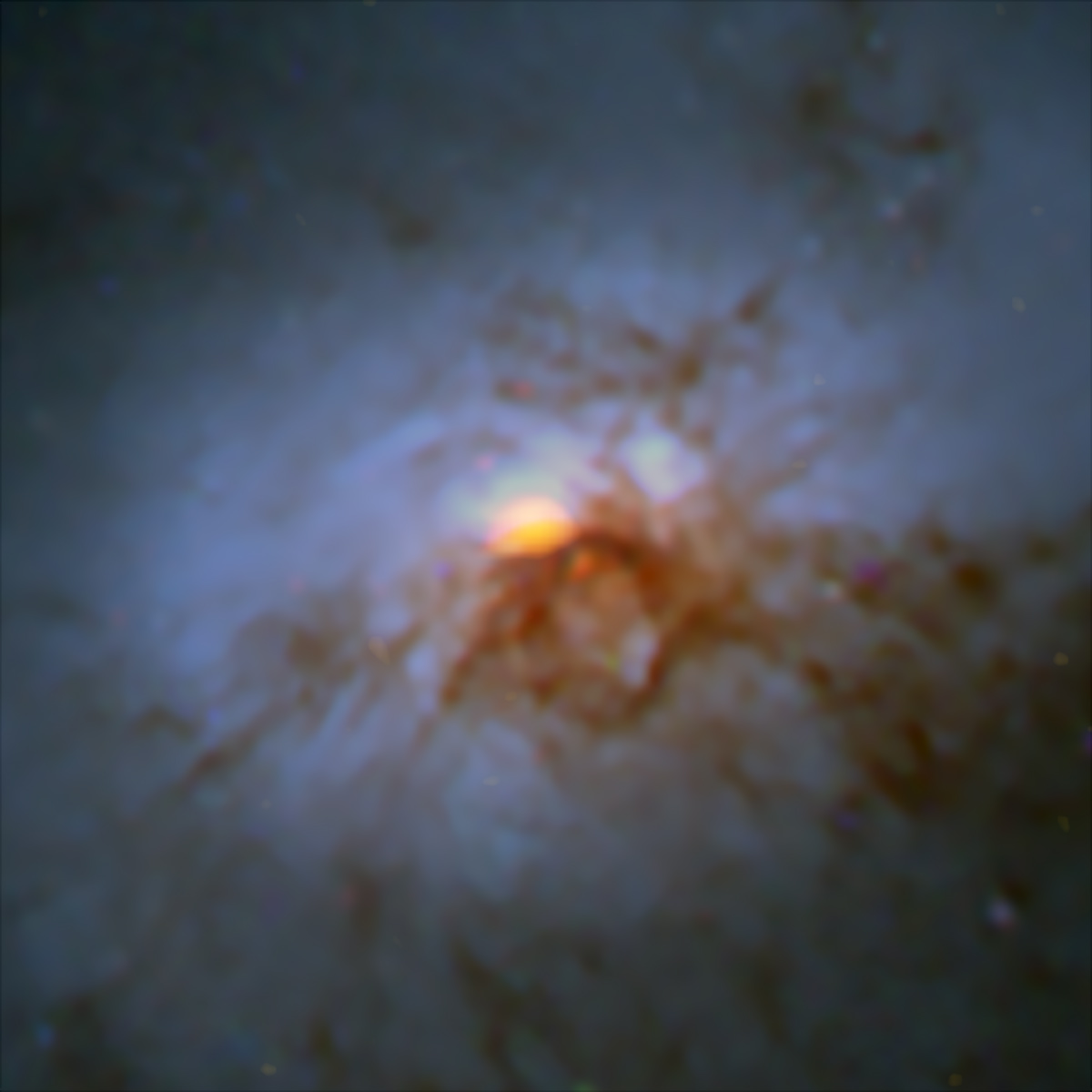