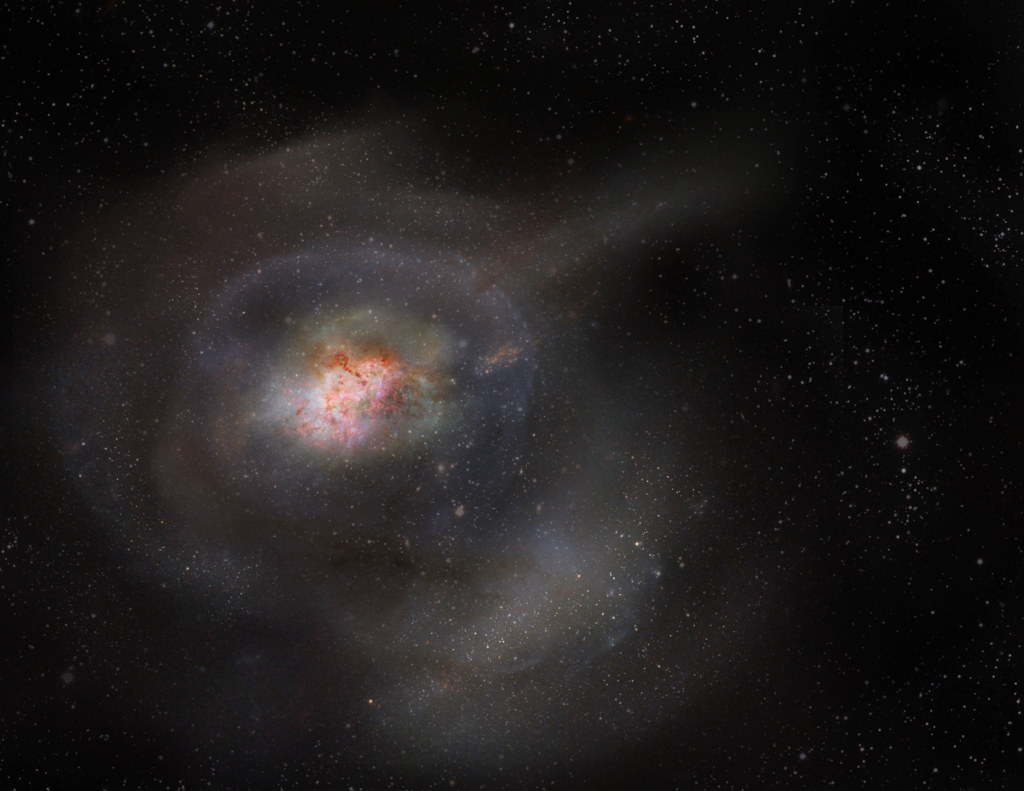 Post-starburst galaxiesGalaxyA large body of gas, dust, stars, and their companions (Planets, asteroids, moons, etc.) held together by their mutual gravitational attraction. They are grouped into three main categories: spiral galaxies, elliptical galaxies, and irregular galaxies. (see below) Another class of galaxies is peculiar galaxies, which are thought to be distorted versions of normal galaxies. were previously thought to scatter all of their gas and dust—the fuel required for creating new starsStarA giant ball of hot gas that creates and emits its own radiation through nuclear fusion.—in violent bursts of energy, and with extraordinary speed. Now, new data from the Atacama Large Millimeter/submillimeter Array (ALMA) reveals that these galaxies don’t scatter all of their star-forming fuel after all. Instead, after their supposed end, these dormant galaxies hold onto and compress large amounts of highly-concentrated, turbulent gas. But contrary to expectation, they’re not using it to form stars.

In most galaxies, scientists expect gas to be distributed in a way similar to starlight. But for post-starburst galaxies, or PSBs, this isn’t the case. PSBs are different from other galaxies because they are born in the aftermath of violent collisions, or mergers between galaxies. Galaxy mergers typically trigger massive bursts of star formation, but in PSBs, this outburst slows down and near-completely stops almost as soon as it begins. As a result, scientists previously believed that little or no star-forming fuel was left in these galaxies’ central star-forming factories. And until now, the belief was that the molecular gases had been redistributed to radii well beyond the galaxies, either through stellar processes or by the effects of black holes. The new results challenge this theory.

“We’ve known for some time that large amounts of molecular gas remains in the vicinity of PSBs but haven’t been able to say where, which in turn, has prevented us from understanding why these galaxies stopped forming stars. Now, we have discovered a considerable amount of remaining gas within the galaxies and that remaining gas is very compact,” said Adam Smercina, an astronomer at the University of Washington and the principal investigator of the study. “While this compact gas should be forming stars efficiently, it isn’t. In fact, it is less than 10-percent as efficient as similarly compact gas is expected to be.”

In addition to being compact enough to make stars, the gas in the observed dormant—or quiescent—galaxies had another surprise in store for the team: it was often centrally-located, though not always, and was surprisingly turbulent. Combined, these two characteristics led to more questions than answers for researchers.

“The rates of star formation in the PSBs we observed are much lower than in other galaxies, even though there appears to be plenty of fuel to sustain the process,” said Smercina. “In this case, star formation may be suppressed due to turbulence in the gas, much like a strong wind can suppress a fire. However, star formation can also be enhanced by turbulence, just like wind can fan flames, so understanding what is generating this turbulent energy, and how exactly it is contributing to dormancy, is a remaining question of this work.”

Decker French, an astronomer at the University of Illinois, and a co-author of the research added, “These results raise the question of what energy sources are present in these galaxies to drive turbulence and prevent the gas from forming new stars. One possibility is energy from the accretion disk of the central supermassive black holes in these galaxies.”

A clear understanding of the processes that govern the formation of stars and galaxies is key to providing context to the Universe and our place in it. The discovery of turbulent, compact gas in otherwise dormant galaxies gives researchers one more clue to solving the mystery of how galaxies in particular live, evolve and die over the course of billions of years. And that means additional future research with the help of ALMA’s 1.3mm receiver, which sees the otherwise invisible with stark clarity.

J.D. Smith, an astronomer at the University of Toledo, and a co-author of the research said, “There is much about the evolution of a typical galaxy we don’t understand, and the transition from their vibrant star-forming lives into quiescence is one of the least understood periods. Although post-starbursts were very common in the early Universe, today they are quite rare. This means the nearest examples are still hundreds of millions of light-years away, but these events foreshadow the potential outcome of a collision, or merger, between the Milky Way Galaxy and the Andromeda Galaxy several billion years from now. Only with the incredible resolving power of ALMA could we peer deep into the molecular reservoirs left behind ‘after the fall.’”

Smercina added, “It’s often the case that we as astronomers intuit the answers to our own questions ahead of observations, but this time, we learned something completely unexpected about the Universe.”

The results of the study are published today in The Astrophysical Journal. 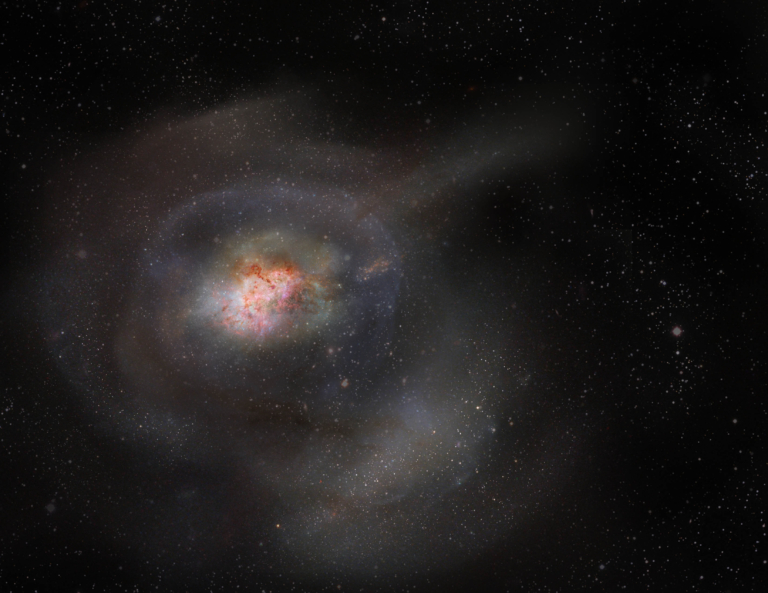 Post-starburst galaxies, or PSBs, were previously thought to expel all of their gas in violent...Read More
Credit: ALMA (ESO/NAOJ/NRAO)/S. Dagnello (NRAO/AUI/NSF) 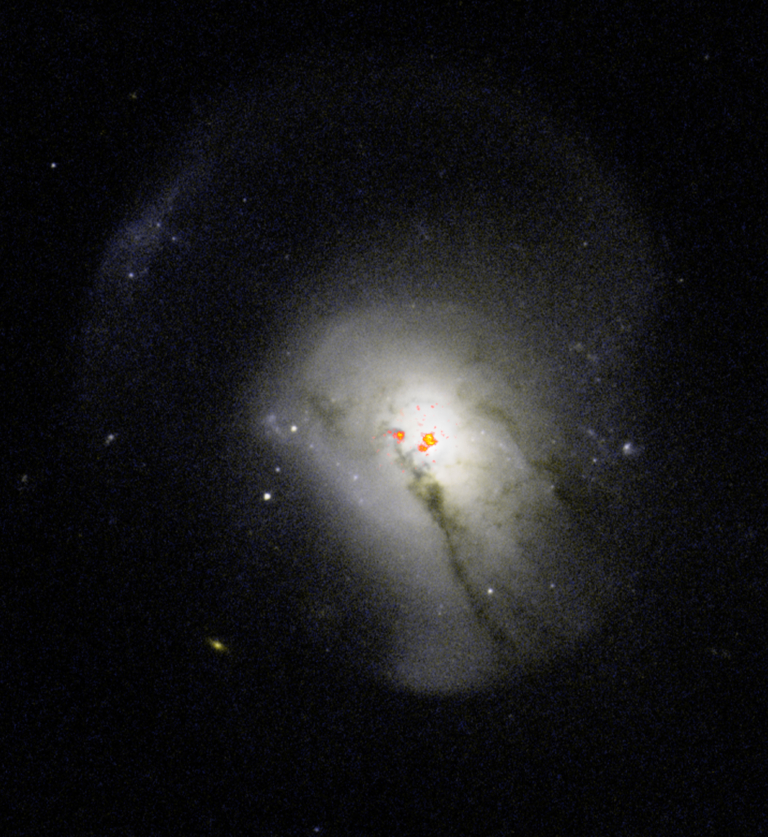 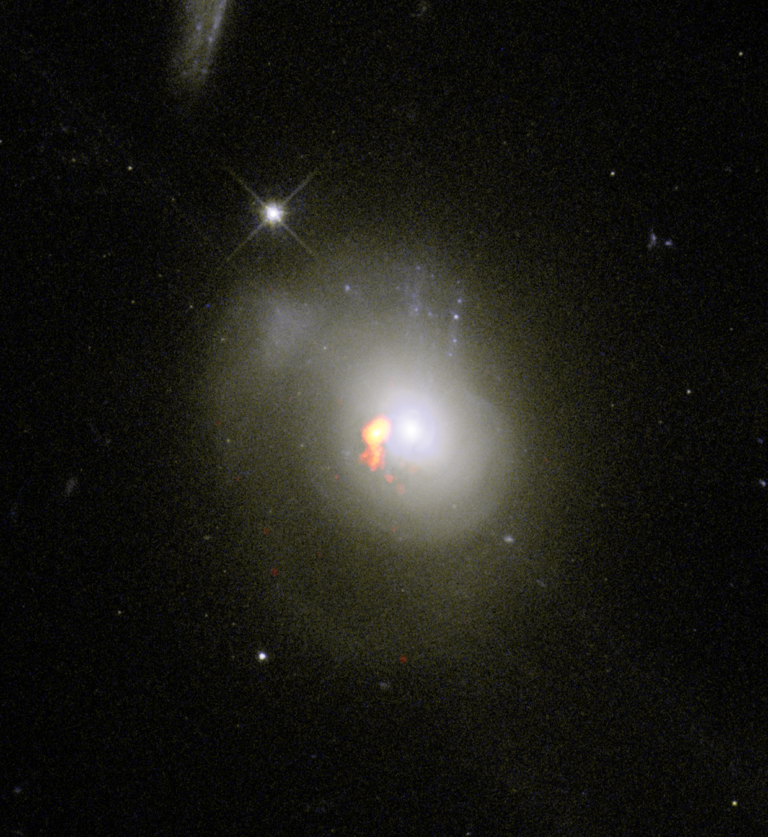 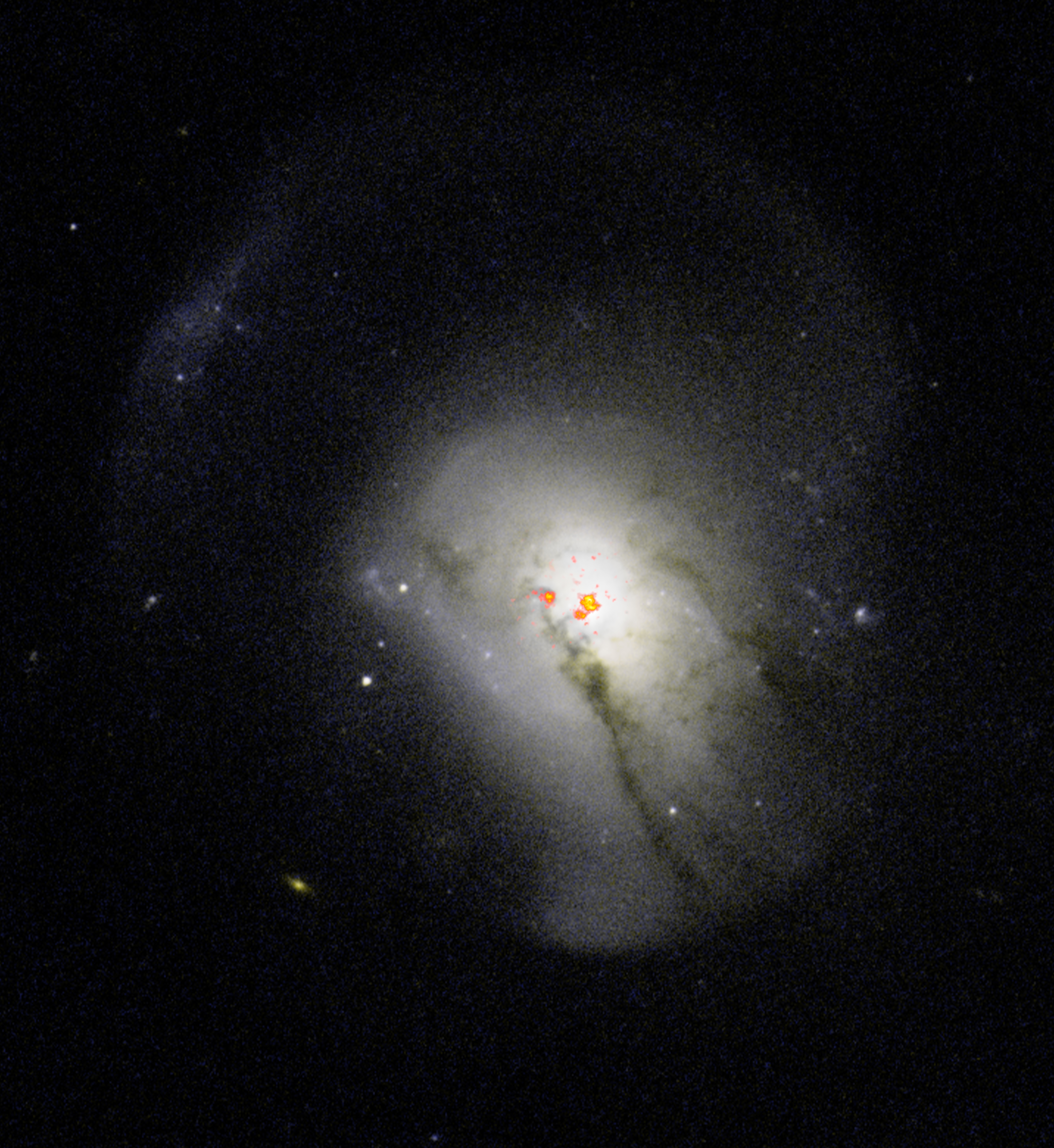 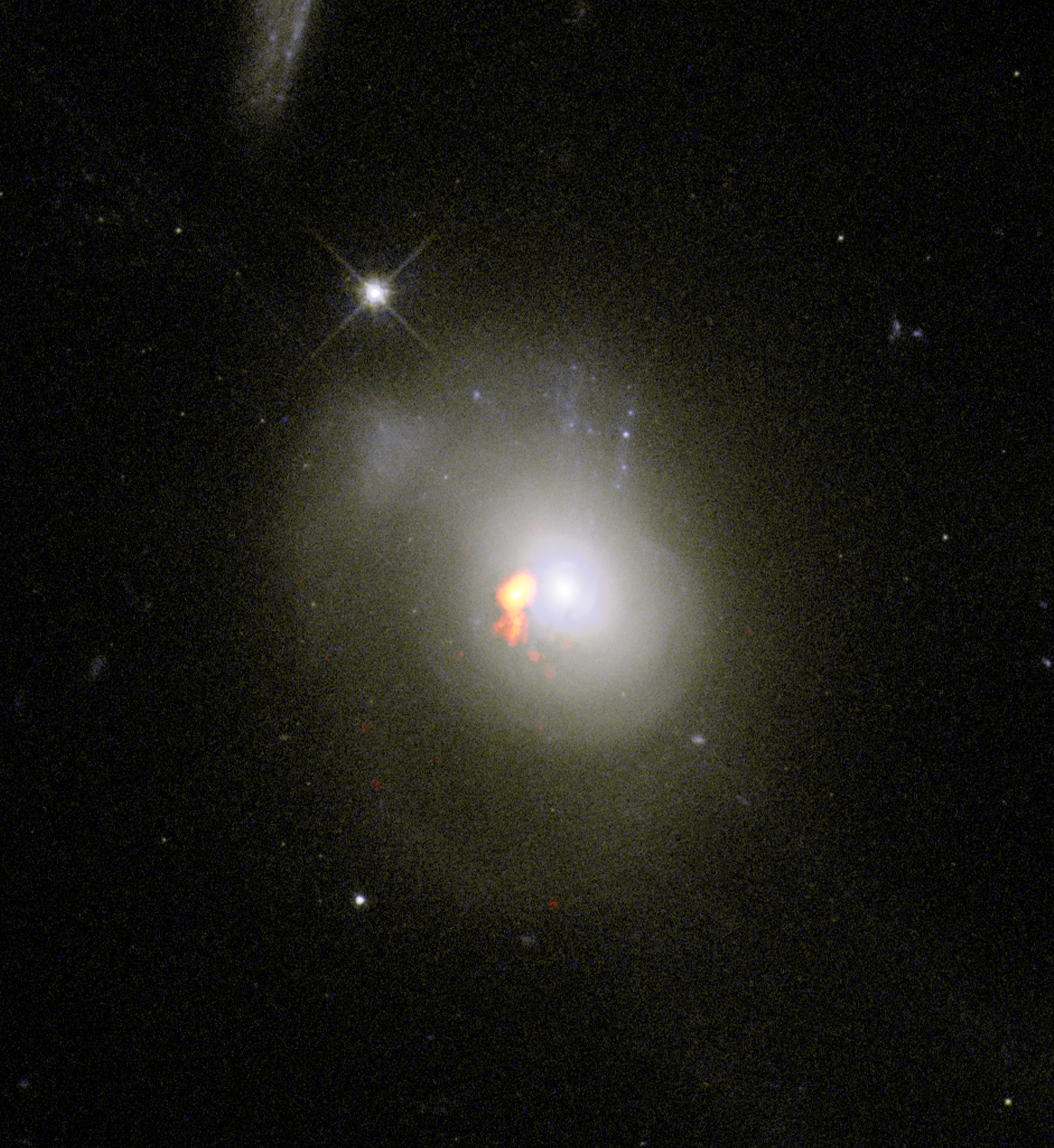