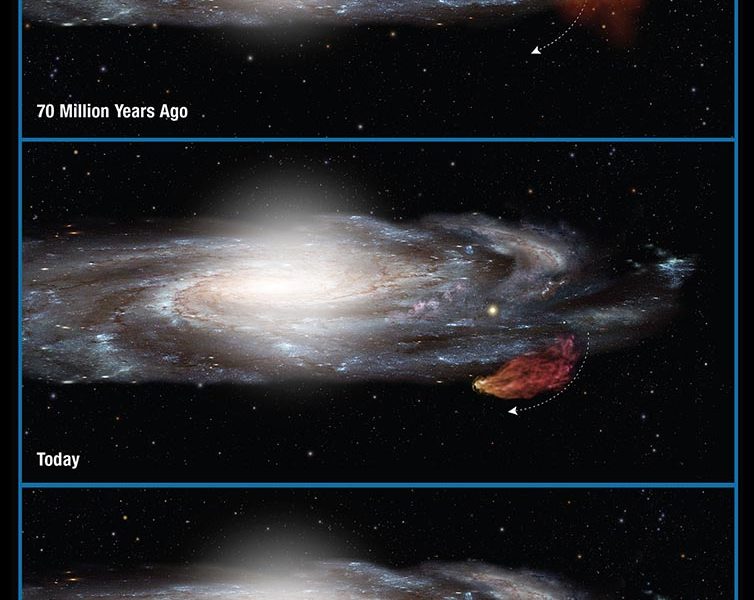 Credit: NASA, ESA, and A. Feild (STScI)
Astronomers using the Hubble Space Telescope have found faint chemical traces of the Milky Way Galaxy lurking inside one of our cosmic neighbors, a massive, starless cloud hurtling through space at nearly 700,000 miles per hour.

This object, known as the Smith Cloud, is unique among other so-called high velocity clouds because its orbit is well known, thanks to earlier studies with radio telescopes, including the National Science Foundation’s (NSF) Robert C. Byrd Green Bank Telescope (GBT). New Hubble observations suggest it was launched from the outer regions of the galactic disk, around 70 million years ago.

The cloud was discovered in the early 1960s by doctoral astronomy student Gail Smith, who detected the radio waves emitted by its hydrogen. It is now on a return collision course and is expected to plow into the Milky Way’s disk in about 30 million years. When it does, astronomers believe it will ignite a spectacular burst of star formation, perhaps providing enough gas to make 2 million Suns.

“The cloud is an example of how the galaxy is changing with time,” explained team leader Andrew Fox of the Space Telescope Science Institute in Baltimore, Maryland. “It’s telling us that the Milky Way is a bubbling, very active place where gas can be thrown out of one part of the disk and then return back down into another.”

“Our galaxy is recycling its gas through clouds, the Smith Cloud being one example, and will form stars in different places than before. Hubble’s measurements of the Smith Cloud are helping us to visualize how active the disks of galaxies are,” Fox said.

Astronomers have measured this comet-shaped region of gas to be 11,000 light-years long and 2,500 light-years across. If the cloud could be seen in visible light, it would span the sky with an apparent diameter 30 times greater than the size of the full Moon.

Astronomers long thought that the Smith Cloud might be a failed, starless galaxy, or gas falling into the Milky Way from intergalactic space. If either of these scenarios proved true, the cloud would contain mainly hydrogen and helium, not the heavier elements made by stars. But if it came from within the galaxy, it would contain more of the elements found within our Sun.

The team used Hubble to measure the Smith Cloud’s chemical composition for the first time, to determine where it came from. They observed the ultraviolet light from the bright cores of three active galaxies that reside billions of light-years beyond the cloud. Using Hubble’s Cosmic Origins Spectrograph, they measured how this light filters through the cloud.

In particular, they looked for sulfur in the cloud, which can absorb ultraviolet light. “By measuring sulfur, you can learn how enriched in sulfur atoms the cloud is compared to the sun,” Fox explained. Sulfur is a good gauge of how many heavier elements reside in the cloud.

The astronomers found that the Smith Cloud is as rich in sulfur as the Milky Way’s outer disk, a region about 40,000 light-years from the galaxy’s center (about 15,000 light-years farther out than our Sun and Solar System). This means that the Smith Cloud was enriched by material from stars. This would not happen if it were pristine hydrogen from outside the galaxy, or if it were the remnant of a failed galaxy devoid of stars. Instead, the cloud appears to have been ejected from within the Milky Way and is now boomeranging back.

Though this settles the mystery of the Smith Cloud’s origin, it raises new questions: How did the cloud get to where it is now? What calamitous event could have catapulted it from the Milky Way’s disk, and how did it remain intact? Could it be a region of dark matter — an invisible form of matter — that passed through the disk and captured Milky Way gas? The answers may be found in future research.

“The Smith Cloud has all the characteristics of a small, infalling dark-matter dominated galaxy, but its gas looks like it came from the outer parts of the Milky Way,” said Jay Lockman, an astronomer with the National Radio Astronomy Observatory (NRAO) in Green Bank, West Virginia, and co-author on a paper describing these results. “There are theoretical calculations suggesting that a dark matter satellite could capture gas as is passes through the Milky Way disk and that may be the amazing circumstance we are witnessing.”

“The Smith Cloud just gets better and better,” concluded Lockman.

The team’s research appears in the January 1, 2016 issue of The Astrophysical Journal Letters. 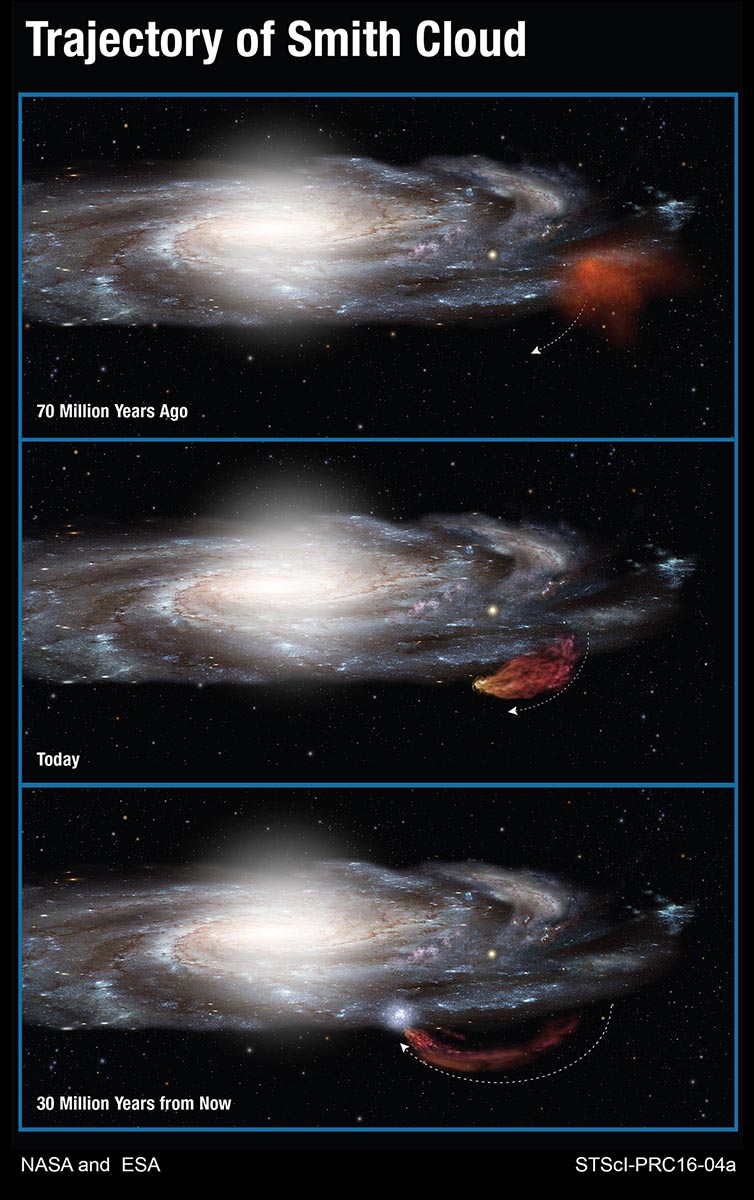 This diagram shows the 100-million-year-long trajectory of the Smith Cloud as it arcs out of...Read More
Credit: NASA, ESA, and A. Feild (STScI) 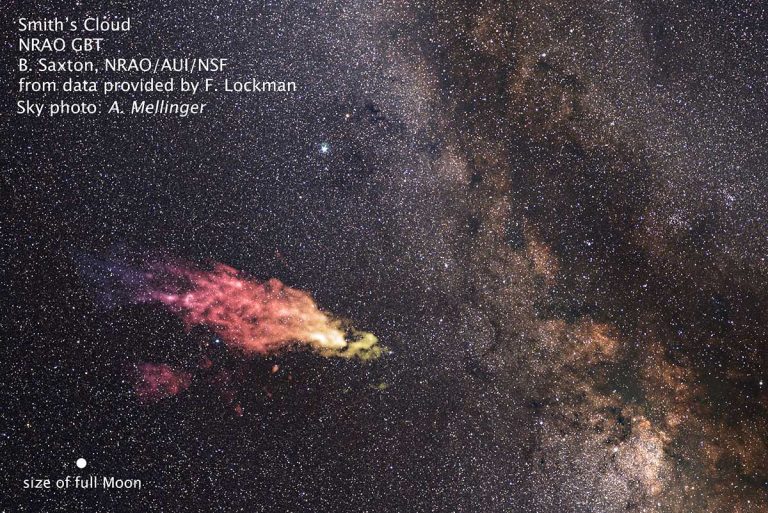 This composite image shows the size and location of the Smith Cloud on the sky....Read More
Credit: B. Saxton and F. Lockman (NRAO/AUI/NSF), and A. Mellinger 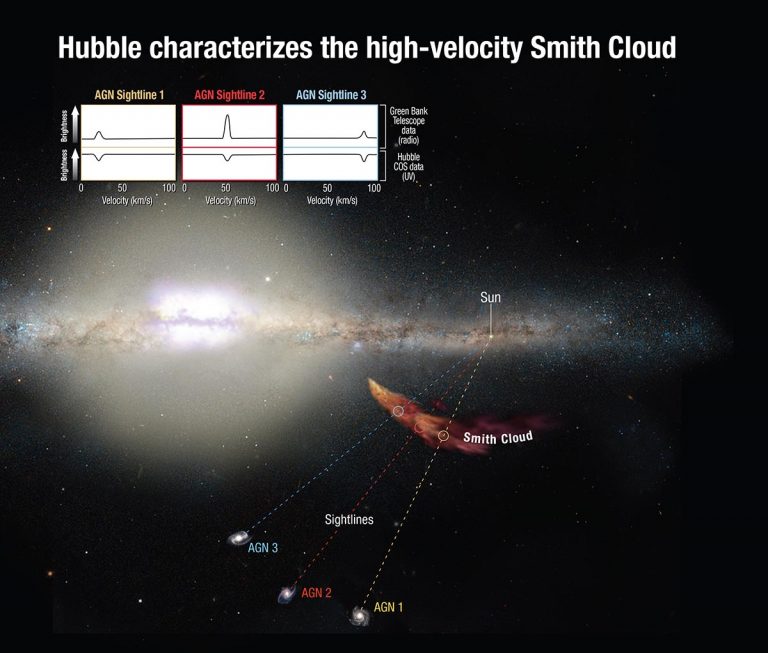 The infalling Smith Cloud is invisible at wavelengths that the Hubble Space Telescope is sensitive...Read More
Credit: NASA, ESA, and A. Feild (STScI) 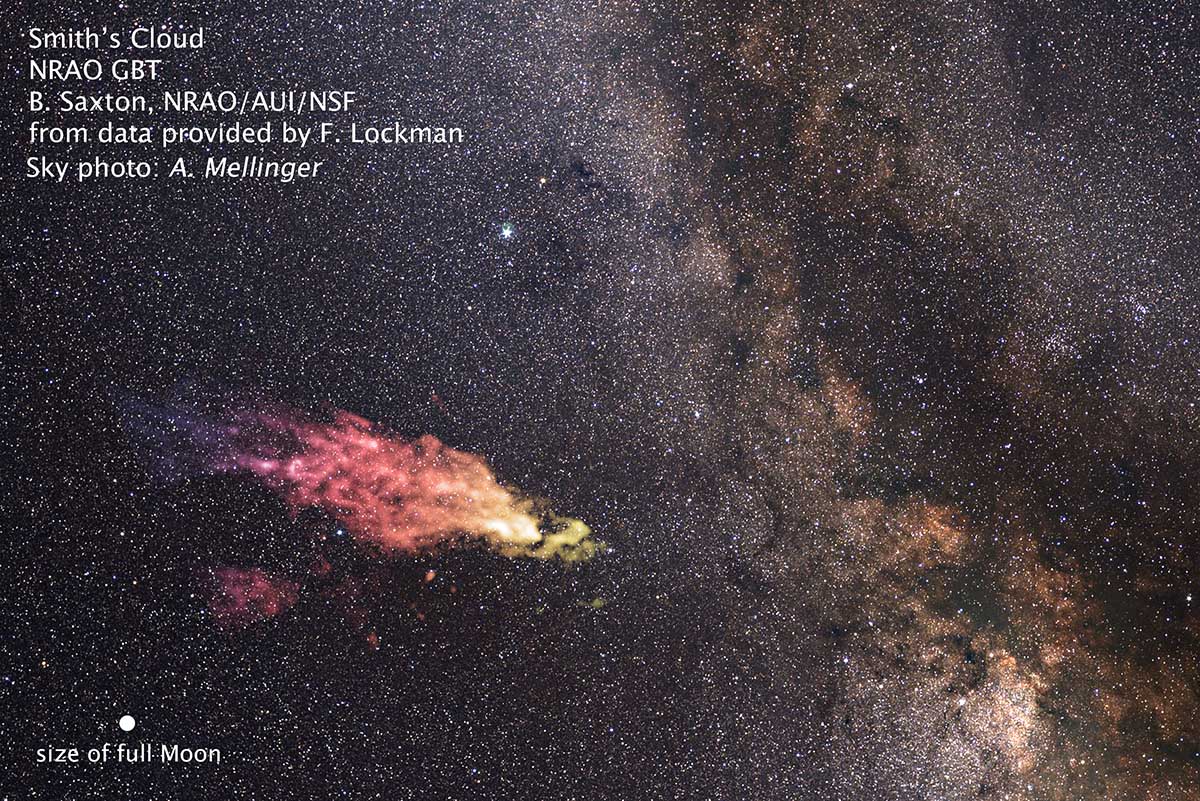 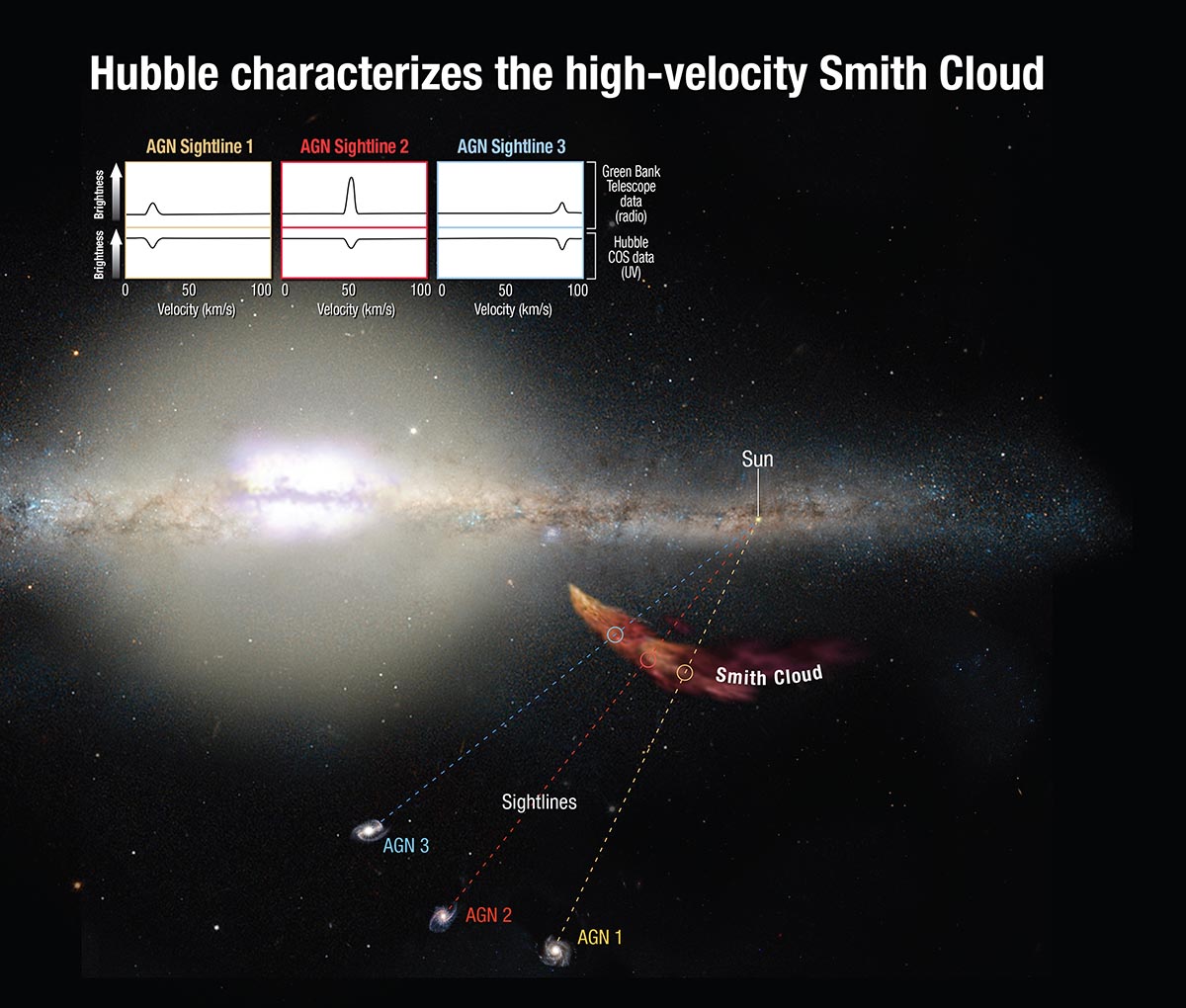