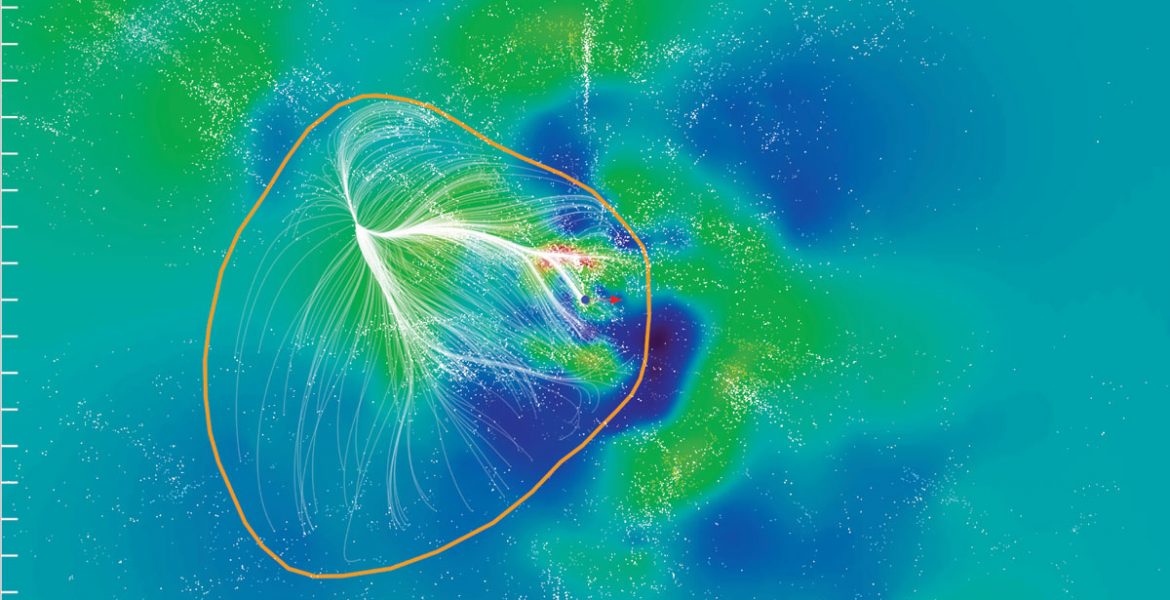 Astronomers using the National Science Foundation’s Green Bank Telescope (GBT) — among other telescopes — have determined that our own Milky Way galaxy is part of a newly identified ginormous supercluster of galaxies, which they have dubbed “Laniakea,” which means “immense heaven” in Hawaiian.

This discovery clarifies the boundaries of our galactic neighborhood and establishes previously unrecognized linkages among various galaxy clusters in the local Universe.

“We have finally established the contours that define the supercluster of galaxies we can call home,” said lead researcher R. Brent Tully, an astronomer at the University of Hawaii at Manoa. “This is not unlike finding out for the first time that your hometown is actually part of much larger country that borders other nations.”

The paper explaining this work is the cover story of the September 4 issue of the journal Nature.

To better refine cosmic mapmaking, the researchers are proposing a new way to evaluate these large-scale galaxy structures by examining their impact on the motions of galaxies. A galaxy between structures will be caught in a gravitational tug-of-war in which the balance of the gravitational forces from the surrounding large-scale structures determines the galaxy’s motion.

By using the GBT and other radio telescopes to map the velocities of galaxies throughout our local Universe, the team was able to define the region of space where each supercluster dominates. “Green Bank Telescope observations have played a significant role in the research leading to this new understanding of the limits and relationships among a number of superclusters,” said Tully.

The Milky Way resides in the outskirts of one such supercluster, whose extent has for the first time been carefully mapped using these new techniques. This so-called Laniakea Supercluster is 500 million light-years in diameter and contains the mass of one hundred million billion Suns spread across 100,000 galaxies.

This study also clarifies the role of the Great Attractor, a gravitational focal point in intergalactic space that influences the motion of our Local Group of galaxies and other galaxy clusters.

The name Laniakea was suggested by Nawa‘a Napoleon, an associate professor of Hawaiian Language and chair of the Department of Languages, Linguistics, and Literature at Kapiolani Community College, a part of the University of Hawaii system. The name honors Polynesian navigators who used knowledge of the heavens to voyage across the immensity of the Pacific Ocean.

Founded in 1967, the Institute for Astronomy at the University of Hawaii at Manoa conducts research into galaxies, cosmology, stars, planets, and the sun. Its faculty and staff are also involved in astronomy education, deep space missions, and in the development and management of the observatories on Haleakala and Maunakea. The Institute operates facilities on the islands of Oahu, Maui, and Hawaii. 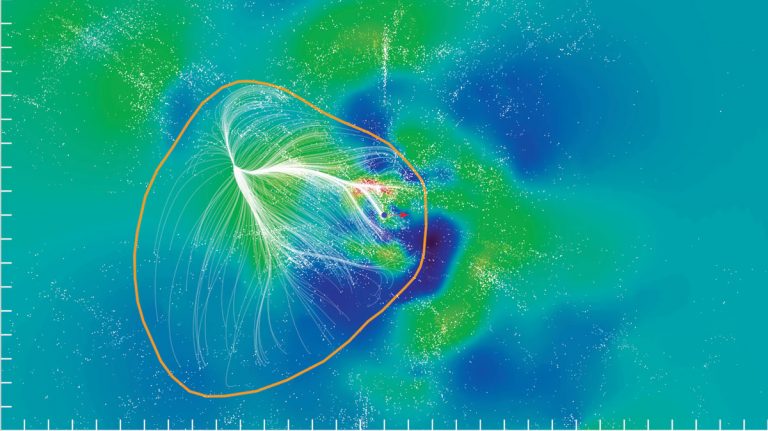 A slice of the Laniakea Supercluster in the supergalactic equatorial plane -- an imaginary plane...Read More
Credit: SDvision interactive visualization software by DP at CEA/Saclay, France. 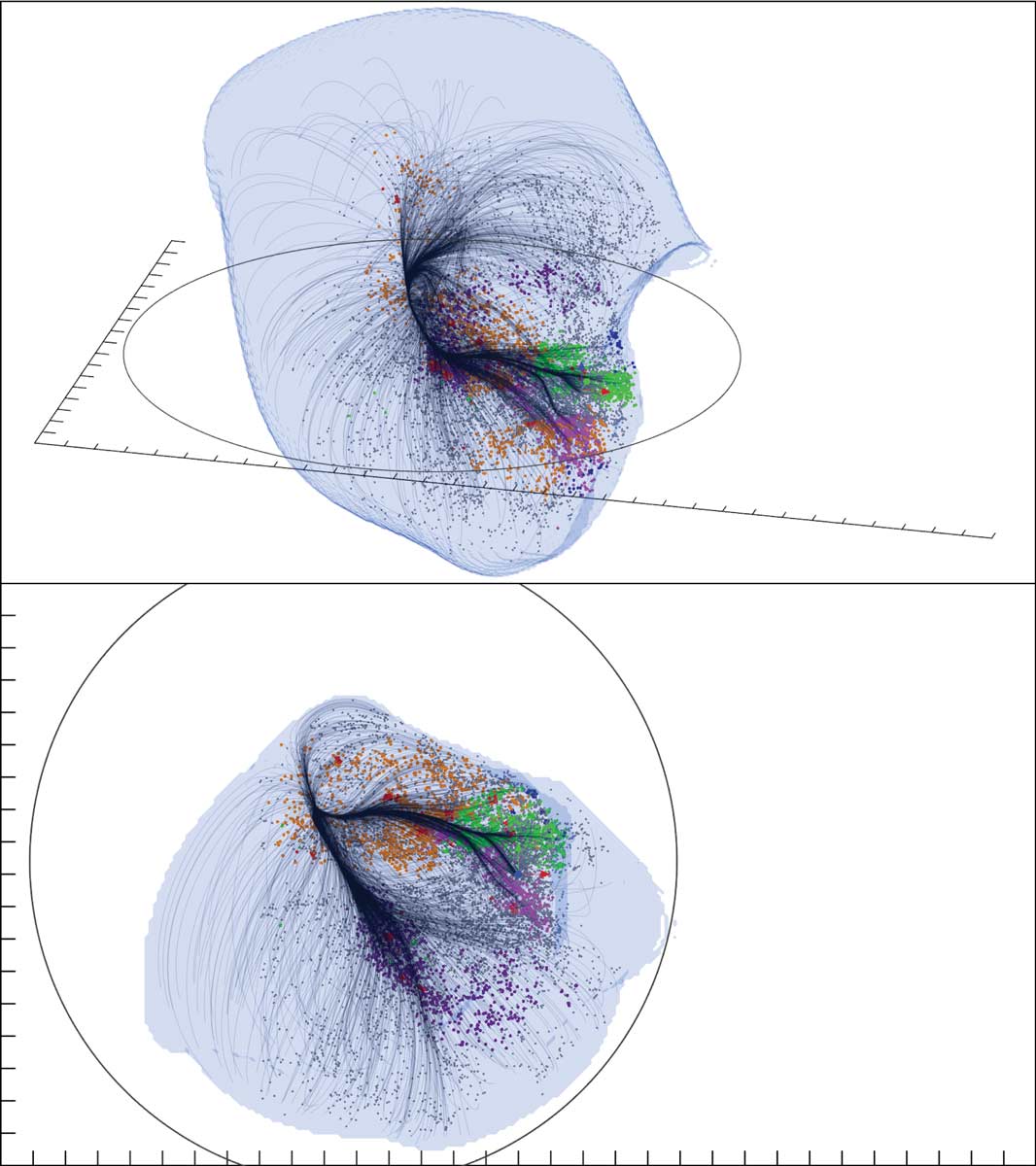 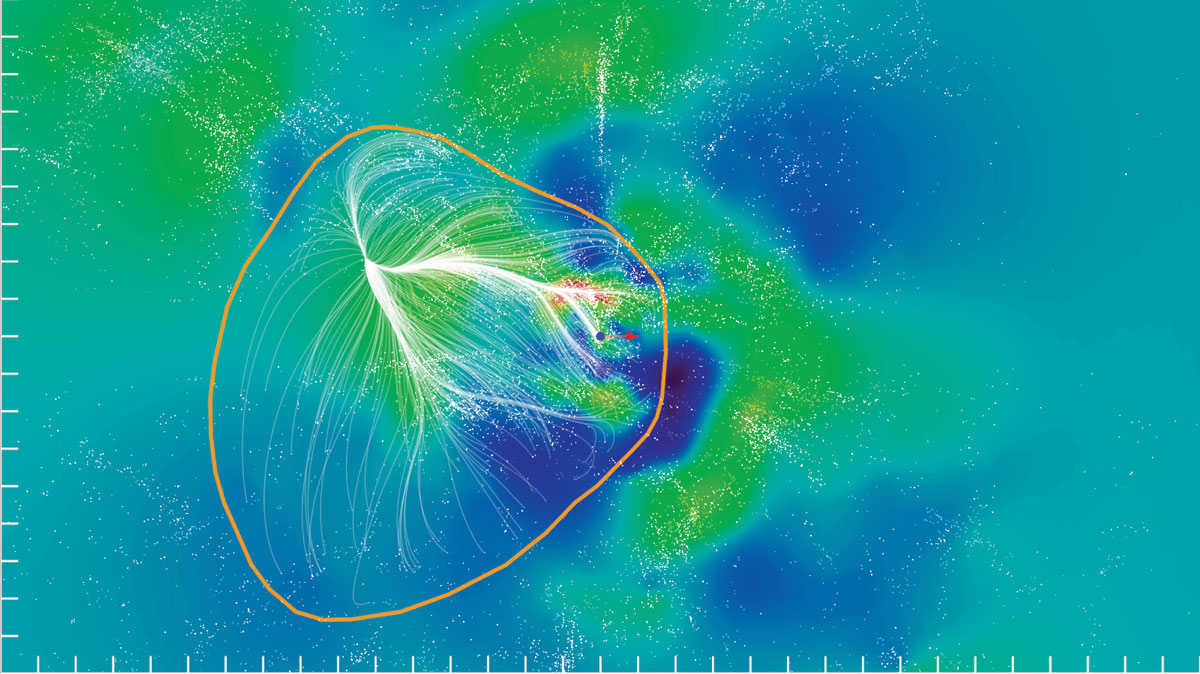