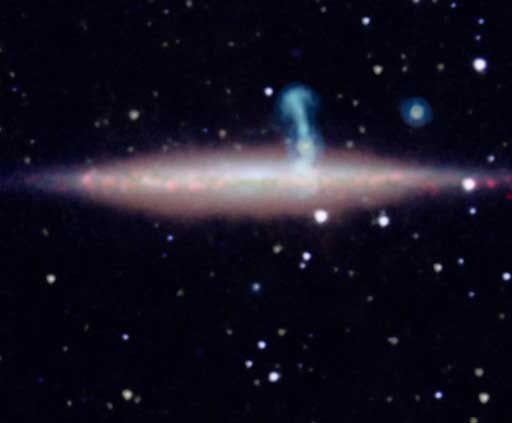 Astronomers studying gas halos around nearby galaxies were surprised when detailed studies with the National Science Foundation’s Karl G. Jansky Very Large Array (VLA) showed that one of their subjects is not a single galaxy, but rather two, nearly perfectly superimposed on the sky to masquerade as one. The discovery allowed them to use the alignment to learn otherwise-unobtainable facts about the nearer galaxy.

As part of a study of 35 galaxies, the astronomers observed one called UGC 10288, a spiral galaxy more than 100 million light-years distant that appears edge-on as seen from Earth. Their multiple VLA observations in 2011 and 2012 produced the best radio-telescope images of that galaxy ever made. The detailed images surprisingly revealed a more-distant galaxy, with strong radio emission, almost directly behind UGC 10288. In previous images, the two galaxies had been blended together.

The background galaxy is nearly 7 billion light-years from Earth.

“This changed the picture, quite literally,” said Judith Irwin, of Queen’s University in Ontario, Canada. “It changed our understanding of the characteristics of UGC 10288, but also gave us an unexpected new tool for learning more about that galaxy,” Irwin added. The alignment of a foreground galaxy with such a strongly-emitting background galaxy with extended jets probably is the first such alignment found, the astronomers said.

The first insight gleaned from the improved images was that UGC 10288 is not forming stars as rapidly as the astronomers first thought. This is because much of the radio emission in the previous, blended images came from the background galaxy.

The new images also showed that the gas in the galaxy’s “outskirts,” high above its spiral disk of stars, is not a single, smooth halo-like envelope, but instead forms smaller, discrete features. One of these features is arc-like, rising more than 11,000 light-years above the disk.

Preliminary use of the more-distant galaxy in this manner has given the scientists some magnetic-field measurements of different portions of UGC 10288. The researchers plan to do additional analysis of their data to make more such measurements.

“We’re getting a nice scientific reward from the unexpected discovery of the background galaxy,” Irwin said. “Ironically, we would not have included UGC 10288 in our original study if its radio brightness had not been boosted by the background galaxy in the earlier images,” she added.

Irwin and English worked with an international team of astronomers from North America, Europe, and India who are part of the Continuum Halos in Nearby Galaxies — an EVLA Survey (CHANG-ES) consortium. The scientists reported their findings in the Astronomical Journal. 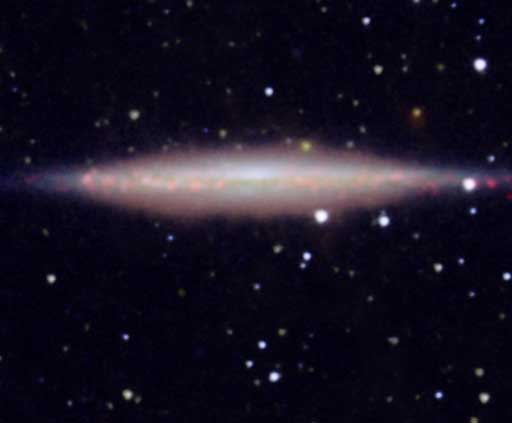 Foreground galaxy. For full caption, please refer to the end of the article.
Credit:  Jayanne English (U. of Manitoba), Judith Irwin (Queen's U.), Richard Rand (U. of New Mexico) and collaborators in the CHANG-ES consortium, NRAO VLA, NASA WISE & Spitzer missions, NOAO, and SDSS. 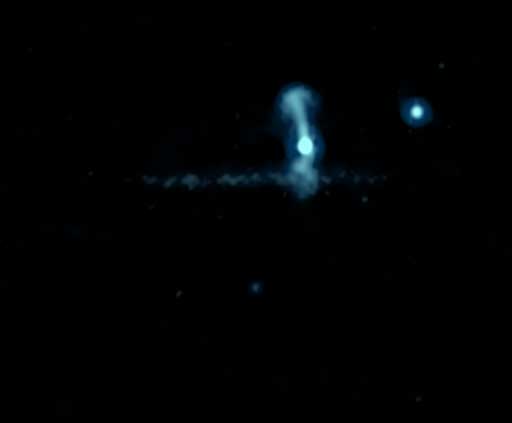 Background galaxy. For full caption, please refer to the end of the article.
Credit:  Jayanne English (U. of Manitoba), Judith Irwin (Queen's U.), Richard Rand (U. of New Mexico) and collaborators in the CHANG-ES consortium, NRAO VLA, NASA WISE & Spitzer missions, NOAO, and SDSS.