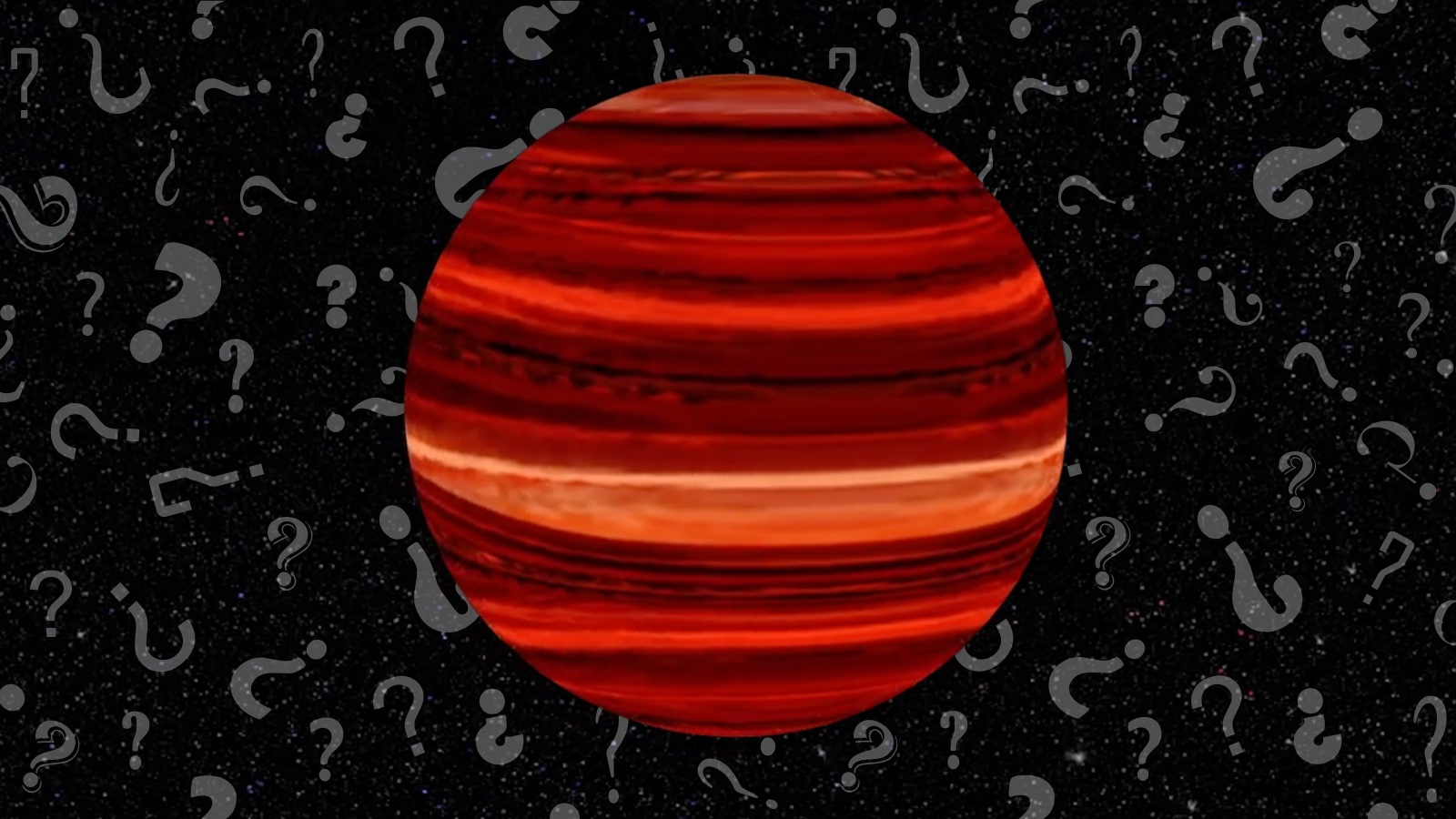 A brown dwarf was found in an unusual place. Credit: NRAO/AUI/NSF

Recently the Atacama Large Millimeter/Submillimeter Array (ALMA) found an unusual object during observations for the Ophiuchus Disk Survey Employing ALMA (ODISEA). It looked unusual since the data didn’t match the rotating protoplanetary disks the ODISEA project was designed to study, and the closer Dary Ruíz-Rodríguez and her team looked, the stranger the object became.

It began with the detection of an elliptical shell, or bubble of carbon monoxide within an interstellar molecular cloud. This type of gas shell is the type of thing scientists expect to see around AGB stars, which are medium-mass stars at the end of their lives. Such a spherical shell of gas is likely to be formed by our Sun in a few billion years. The Sun shines by fusing hydrogen in its core, which also creates the pressure needed to prevent the Sun from collapsing under its own weight. But in a few billion years the Sun will run out of hydrogen to burn. So it will start to fuse other elements such as helium, which burns much hotter. As a result, the Sun will swell into a red giant, and for a time cast off a bit of its outer layer to create a shell of gas surrounding the star.

When scientists see a shell of gas like this, they expect to see it centered around a red giant star. Sure enough, there was an object in the center of this carbon monoxide shell. The object has a surface temperature of about 3,000 K or less, just as scientists expect from a red giant, but it is very dim. Too dim to be a red giant. The object is so dim it looks like a brown dwarf. This didn’t make any sense. Brown dwarfs are too small to undergo hydrogen fusion in their core, and they don’t cast off an outer layer of gas at the end of their lives.

But looks can be deceiving, so the team looked for alternatives. Perhaps the dim object is a red giant, but much more distant than the shell of gas they observed. The Ophiuchus Molecular cloud, where the target was expected to be,  is about 450 light-years from Earth,  but given the observed brightness, the red giant would have to be 15,000 to 30,000 light-years away, behind the center of our Galaxy. When the team compared the proper motions and radial velocities of the Ophiuchus members and the target, it strongly suggested that the mysterious object was a member of the Ophiuchus Molecular Cloud  and could not be a distant. This means it can’t be a red giant. Just to be sure, the team also looked at near-infrared observations of the object gathered from the European Southern Observatory’s Very Large Telescope (VLT), which further confirmed it isn’t a red giant star.

Another idea is that it might be a very young star. Stars form when a region within a molecular cloud gravitationally collapses into a protostar. Early on there is a period where gravitational squeezing of the protostar collapses the central region into a dense core. This is known as the first hydrostatic core mass and is expected to be highly embedded in a dense environment and surrounded by a massive, optically thick disk. As material constantly feeds the central object, it can sometimes leave behind a thin shell of gas surrounding it. But if that were the case, then ALMA should see a dense carbon monoxide core collapsing inward as it falls toward the protostellar core. Surprisingly, ALMA showed a tenuous carbon monoxide shell expanding outward; and on top of that, did not detect any signs of circumstellar disk material. So this isn’t the answer either.

All of the observational data, both from ALMA and the VLT, lead to the same conclusion. This object is a brown dwarf surrounded by an expanding shell of gas. It’s a very strange thing, and Dary Ruíz-Rodríguez and her team think it could be the first observation of a phenomenon known as a deuterium flash.

Brown dwarfs lie in the middle ground between planets and stars. They are about the size of Jupiter, but about 30-70 times more massive. They aren’t stars because they don’t have enough mass to trigger the fusion of hydrogen to helium in the usual way. But they can massive enough to fuse an isotope of hydrogen known as deuterium. Elements are defined by the number of protons they have in their nucleus, but many elements have multiple varieties, or isotopes, that have different numbers of neutrons. The nucleus of regular hydrogen is just a single proton.  Deuterium, also known as hydrogen-2 has one proton and one neutron.  There is only about 1 deuterium atom for every 500 hydrogen atoms, but brown dwarfs are justmassive enough to fuse deuterium with hydrogen and harness it as a power source for a short while.

The data can’t completely prove a deuterium flash as the cause, and the team is careful to note other possible solutions such as a collision between the brown dwarf and a small planet. But it’s clear that whatever the cause, this mousey brown dwarf has a very strange tale indeed.