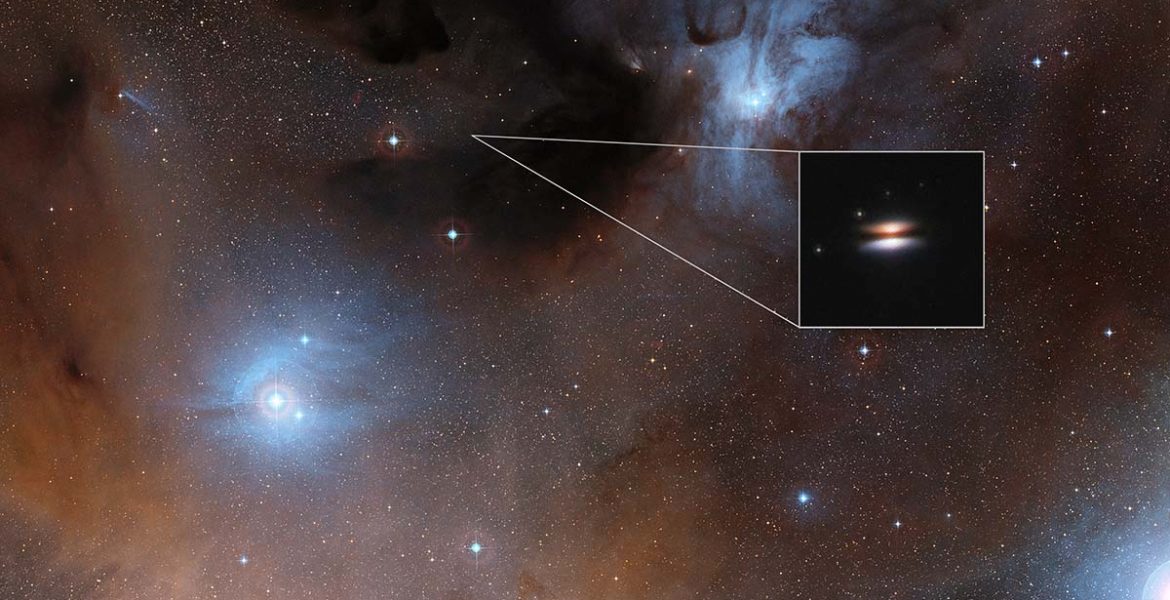 Astronomers have used the Atacama Large Millimeter/submillimeter Array (ALMA) and IRAM telescopes to make the first direct measurement of the temperature of the large dust grains in the outer parts of a planet-forming disk around a young star. By applying a novel technique to observations of an object nicknamed the Flying Saucer, they find that the grains are much colder than expected: -266 degrees Celsius. This surprising result suggests that models of these disks may need to be revised.

The international team, led by Stephane Guilloteau at the Laboratoire d’Astrophysique de Bordeaux, France, measured the temperature of large dust grains around the young star 2MASS J16281370-2431391 in the spectacular Rho Ophiuchi star formation region, about 400 light-years from Earth.

This star is surrounded by a disk of gas and dust — such disks are called protoplanetary disks as they are the early stages in the creation of planetary systems. This particular disk is seen nearly edge-on, and its appearance in visible light pictures has led to its being nicknamed the Flying Saucer.

The astronomers used ALMA to observe the glow coming from carbon monoxide molecules in the 2MASS J16281370-2431391 disk. They were able to create very sharp images and found something strange — in some cases they saw a negative signal. Normally a negative signal is physically impossible, but in this case there is an explanation, which leads to a surprising conclusion.

Lead author Stephane Guilloteau takes up the story: “This disk is not observed against a black and empty night sky. Instead it’s seen in silhouette in front of the glow of the Rho Ophiuchi Nebula. This diffuse glow is too extended to be detected by ALMA, but the disk absorbs it. The resulting negative signal means that parts of the disk are colder than the background. The Earth is quite literally in the shadow of the Flying Saucer!”

The team combined the ALMA measurements of the disc with observations of the background glow made with the IRAM 30-meter telescope in Spain. They derived a disk dust grain temperature of only -266 degrees Celsius (only 7 degrees above absolute zero, or 7 Kelvin) at a distance of about 15 billion kilometers from the central star. This is the first direct measurement of the temperature of large grains (with sizes of about one millimeter) in such objects.

This temperature is much lower than the -258 to -253 degrees Celsius (15 to 20 Kelvin) that most current models predict. To resolve the discrepancy, the large dust grains must have different properties than those currently assumed, to allow them to cool down to such low temperatures.

“To work out the impact of this discovery on disk structure, we have to find what plausible dust properties can result in such low temperatures. We have a few ideas — for example the temperature may depend on grain size, with the bigger grains cooler than the smaller ones. But it is too early to be sure,” adds co-author Emmanuel di Folco (Laboratoire d’Astrophysique de Bordeaux).

If these low dust temperatures are found to be a normal feature of protoplanetary disks this may have many consequences for understanding how they form and evolve.

For example, different dust properties will affect what happens when these particles collide, and thus their role in providing the seeds for planet formation. Whether the required change in dust properties is significant or not in this respect cannot yet be assessed.

Low dust temperatures can also have a major impact for the smaller dusty disks that are known to exist. If these disks are composed of mostly larger, but cooler, grains than is currently supposed, this would mean that these compact discs can be arbitrarily massive, so could still form giant planets comparatively close to the central star.

Further observations are needed, but it seems that the cooler dust found by ALMA may have significant consequences for the understanding of protoplanetary disks.

This research was presented in a paper entitled “The shadow of the Flying Saucer: A very low temperature for large dust grains”, by S. Guilloteau et al., published in Astronomy & Astrophysics Letters. 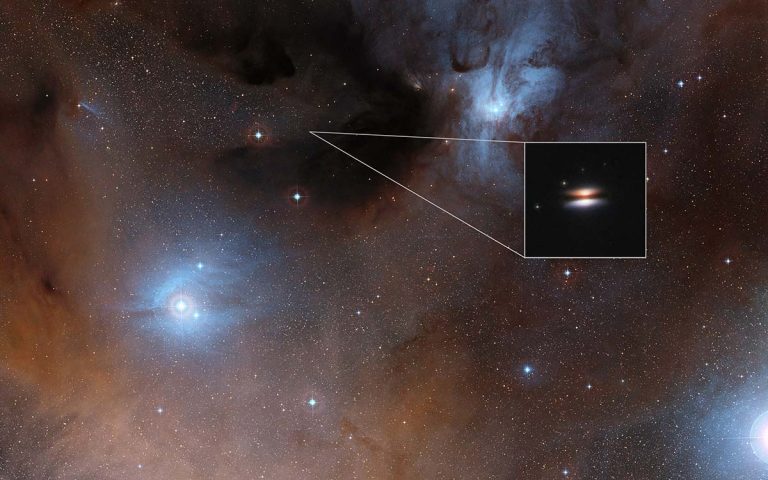 The young star 2MASS J16281370-2431391 lies in the spectacular Rho Ophiuchi star formation region, about 400 light-years from Earth. It is surrounded by a disk of gas and dust — such disks are called protoplanetary discs as they are the early stages in the creation of planetary systems. This particular disk is seen nearly edge-on, and its appearance in visible light pictures has led to its being nicknamed the Flying Saucer. The main image shows part of the Rho Ophiuchi region and a much enlarged close-up infrared view of the Flying Saucer from the Hubble Space Telescope is shown as an insert.
Credit:  Digitized Sky Survey 2/NASA/ESA 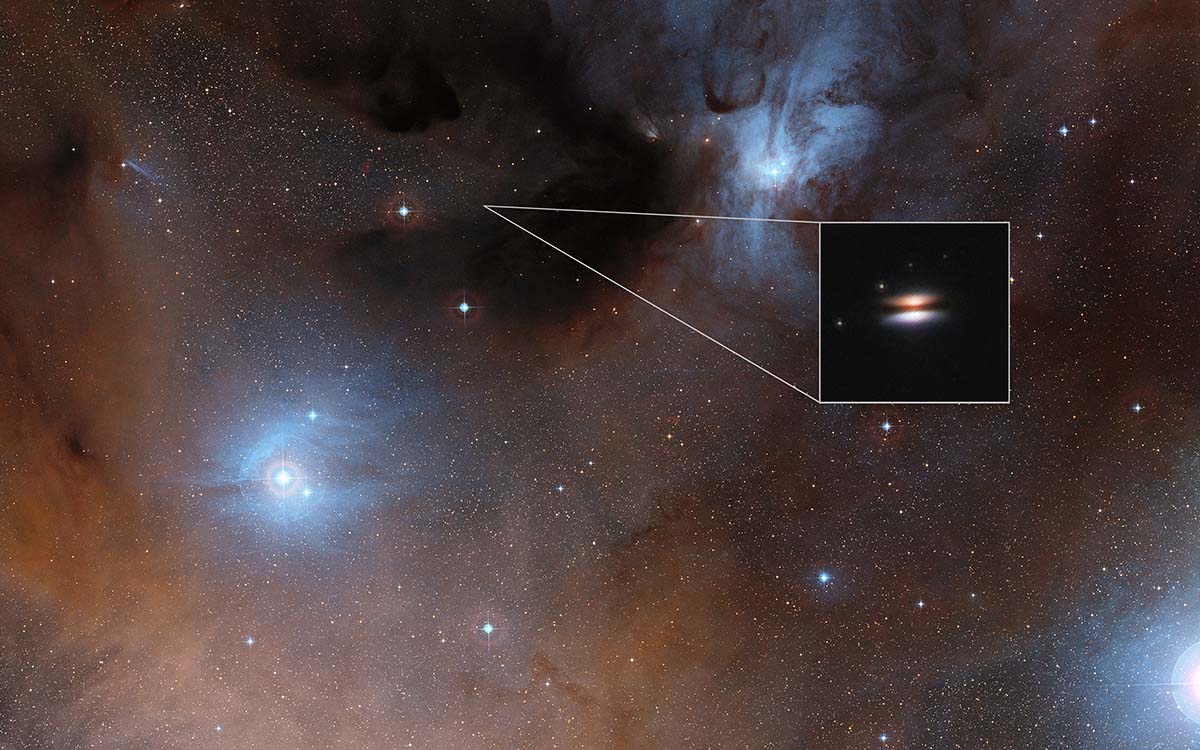