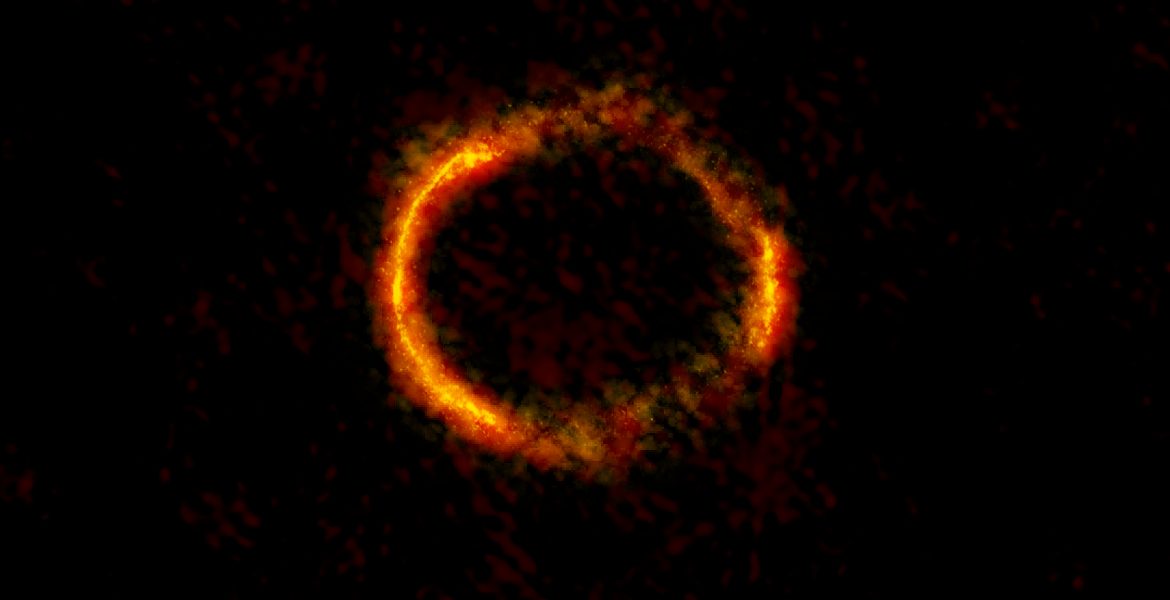 Astronomers have discovered that a distant galaxy — seen from Earth with the aid of a gravitational lens — appears like a cosmic ring, thanks to the highest resolution images ever taken with the Atacama Large Millimeter/submillimeter Array (ALMA).

Forged by the chance alignment of two distant galaxies, this striking ring-like structure is a rare and peculiar manifestation of gravitational lensing as predicted by Albert Einstein in his theory of general relativity.

Gravitational lensing occurs when a massive galaxy or cluster of galaxies bends the light emitted from a more distant galaxy, forming a highly magnified, though much distorted image. In this particular case, the galaxy known as SDP.81 and an intervening galaxy line up so perfectly that the light from the more distant one forms a nearly complete circle as seen from Earth.

“Gravitational lensing is used in astronomy to study the very distant, very early Universe because it gives even our best telescopes an impressive boost in power,” said ALMA Deputy Program Scientist Catherine Vlahakis. “With the astounding level of detail in these new ALMA images, astronomers will now be able to reassemble the information contained in the distorted image we see as a ring and produce a reconstruction of the true image of the distant galaxy.”

The new SDP.81 images were taken in October 2014 as part of ALMA’s Long Baseline Campaign, an essential program to test and verify the telescope’s highest resolving power, achieved when the antennas are at their greatest separation: up to 15 kilometers apart.

The highest resolution image of SDP.81 was made by observing the relatively bright light emitted by cosmic dust in the distant galaxy. This striking image reveals well-defined arcs in a pattern that hints at a more complete, nearly contiguous ring structure. Other slightly lower-resolution images, made by observing the faint molecular signatures of carbon monoxide and water, help complete the picture and provide important details about this distant galaxy.

Though this intriguing interplay of gravity and light in SDP.81 has been studied previously by other observatories, including radio observations with the Submillimeter Array and the Plateau de Bure Interferometer, and visible light observations with the Hubble Space Telescope, none has captured the remarkable details of the ring structure revealed by ALMA.

“The exquisite amount of information contained in the ALMA images is incredibly important for our understanding of galaxies in the early Universe,” said astronomer Jacqueline Hodge with the National Radio Astronomy Observatory in Charlottesville, Va. “Astronomers use sophisticated computer programs to reconstruct lensed galaxies’ true appearance. This unraveling of the bending of light done by the gravitational lens will allow us to study the actual shape and internal motion of this distant galaxy much more clearly than has been possible until now.”

For these observations, ALMA achieved an astounding maximum resolution of 23 milliarcseconds, which is about the same as seeing the rim of a basketball hoop atop the Eiffel Tower from the observing deck of the Empire State Building.

“It takes a combination of ALMA’s high resolution and high sensitivity to unlock these otherwise hidden details of the early Universe,” said ALMA Director Pierre Cox. “These results open a new frontier in astronomy and prove that ALMA can indeed deliver on its promise of transformational science.” 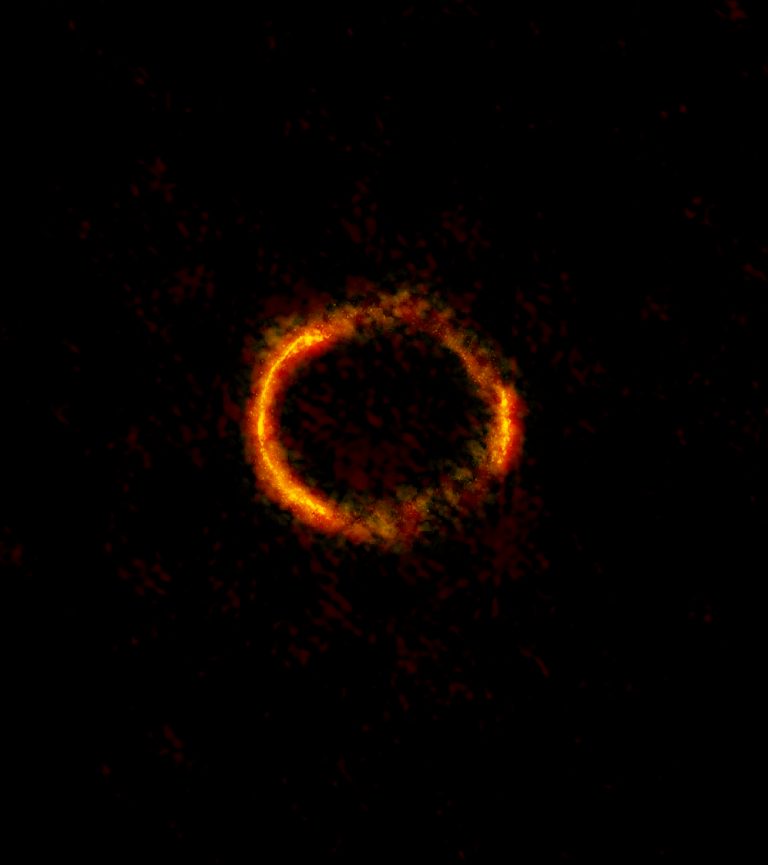 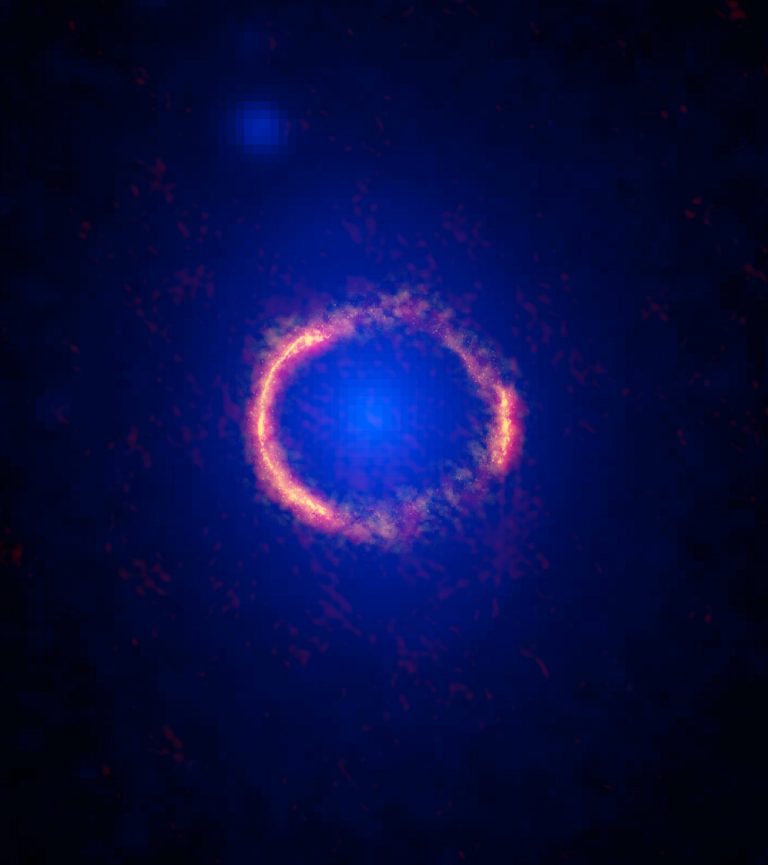 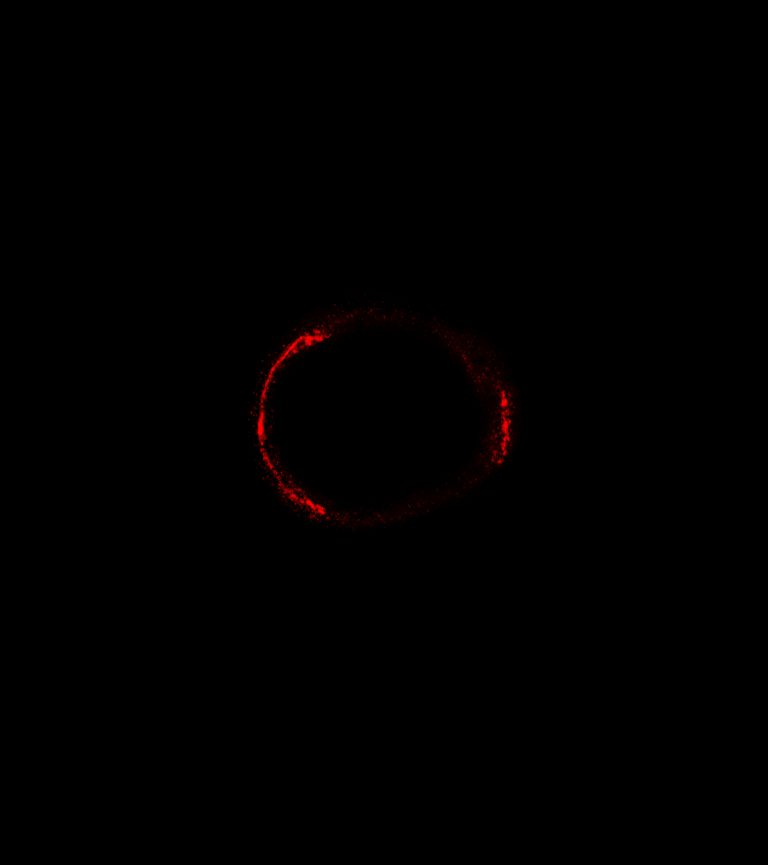 ALMA's highest resolution image ever reveals the dust glowing inside the distant galaxy SDP.81. The ring structure was created by a gravitational lens that distorted the view of the distant galaxy into a ring-like structure.
Credit: ALMA (NRAO/ESO/NOAJ)
Animation demonstrating how the gravity from a massive foreground galaxy can bend the light of a more distant galaxy. If the two galaxies line up just right, the result is a highly distorted image of the distant galaxy known as an Einstein ring. The radio image portion of the video is of galaxy SDP.81, which was imaged by ALMA as part of the telescope's Long Baseline Campaign.
Credit: NRAO/AUI/NSF; ALMA (NRAO/ESO/NAOJ); Dana Berry / SkyWorks 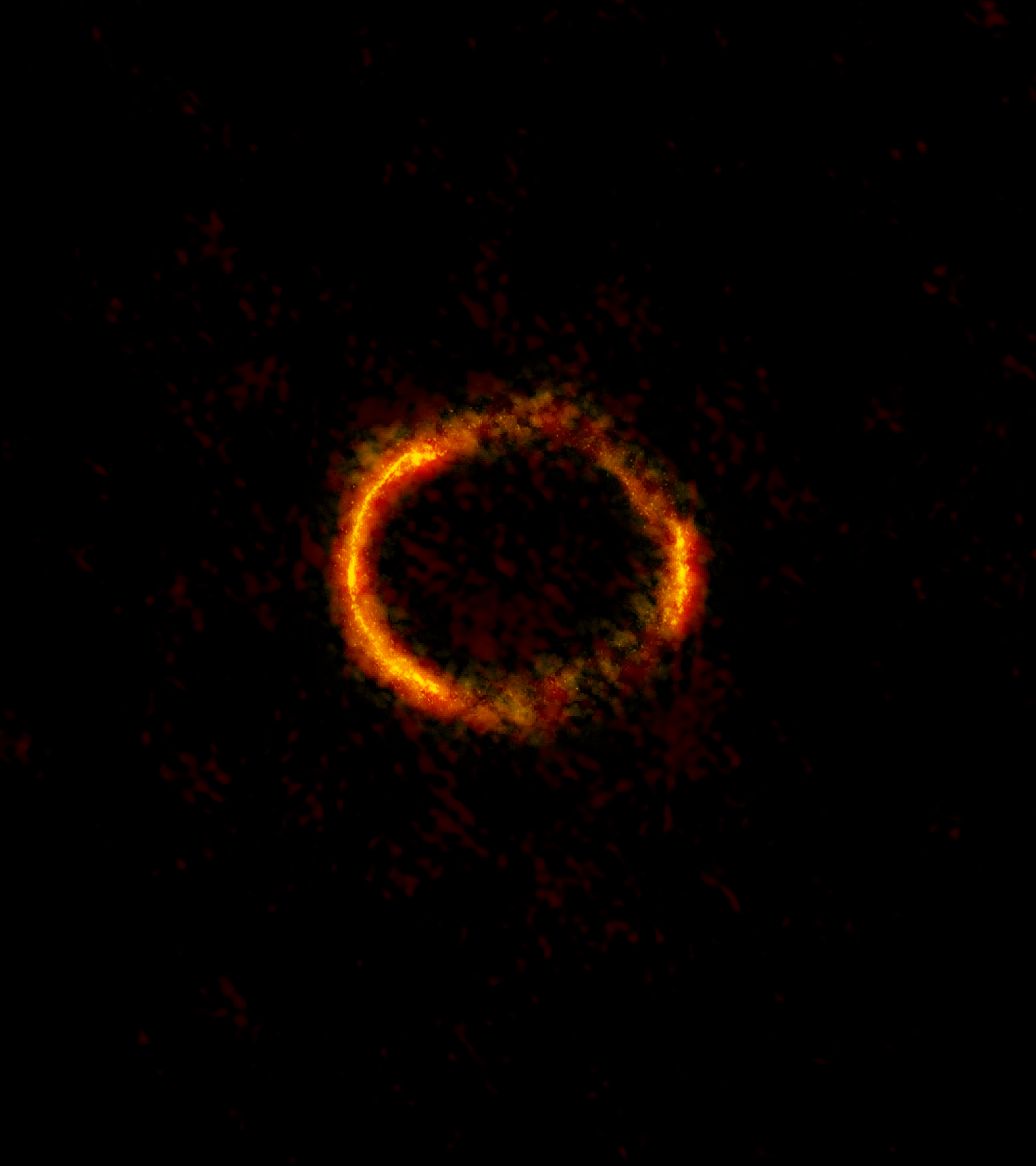 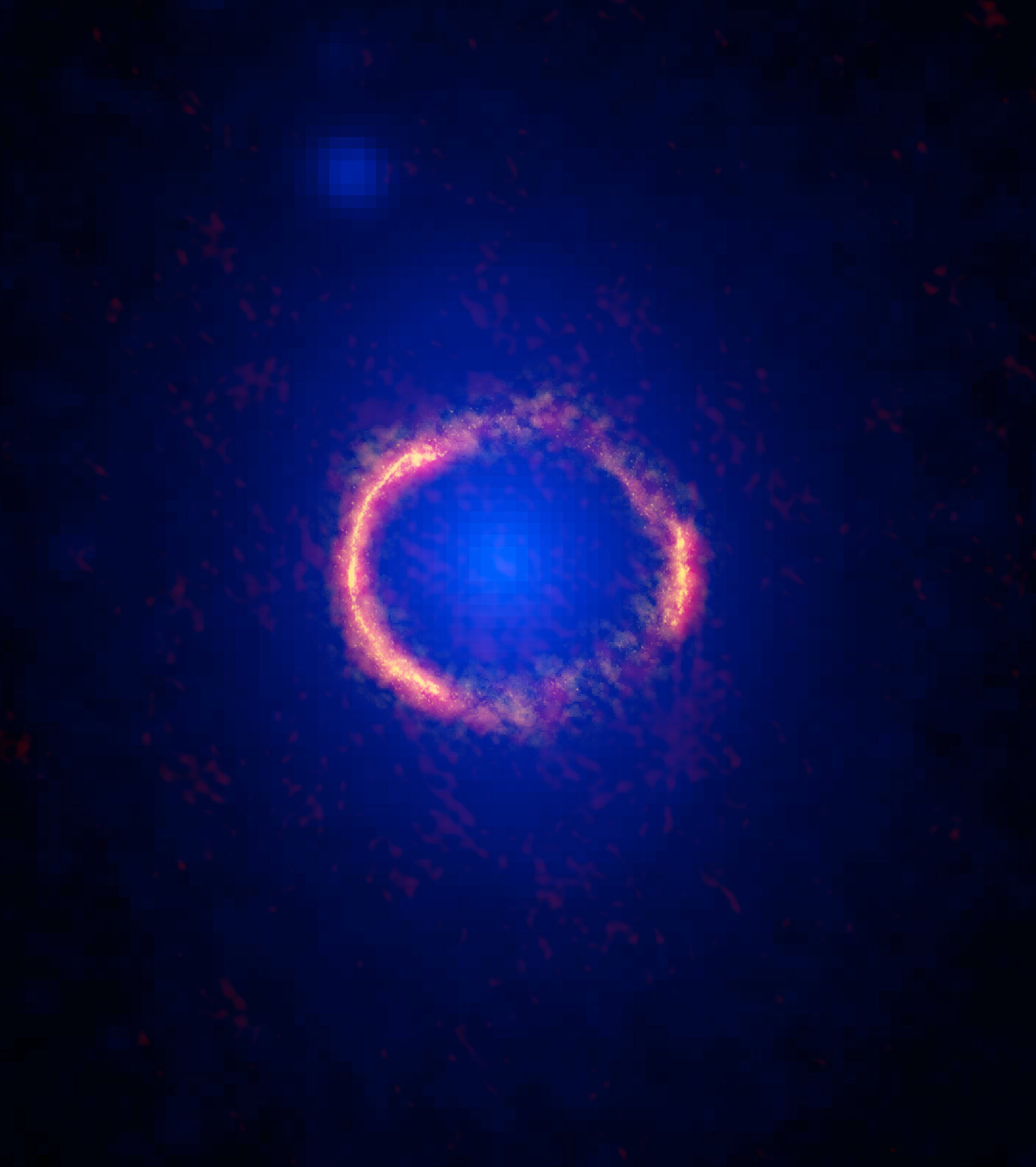 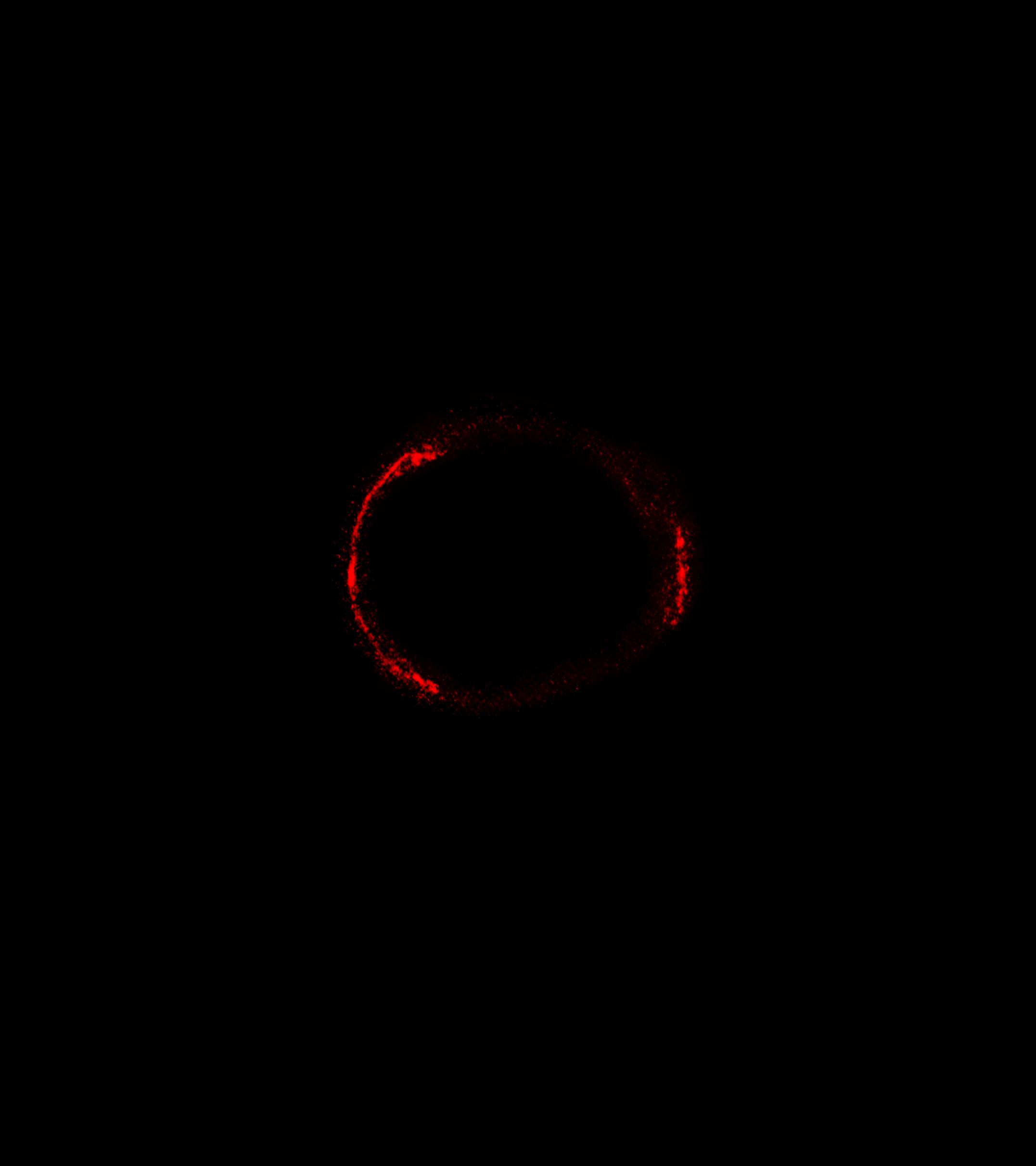