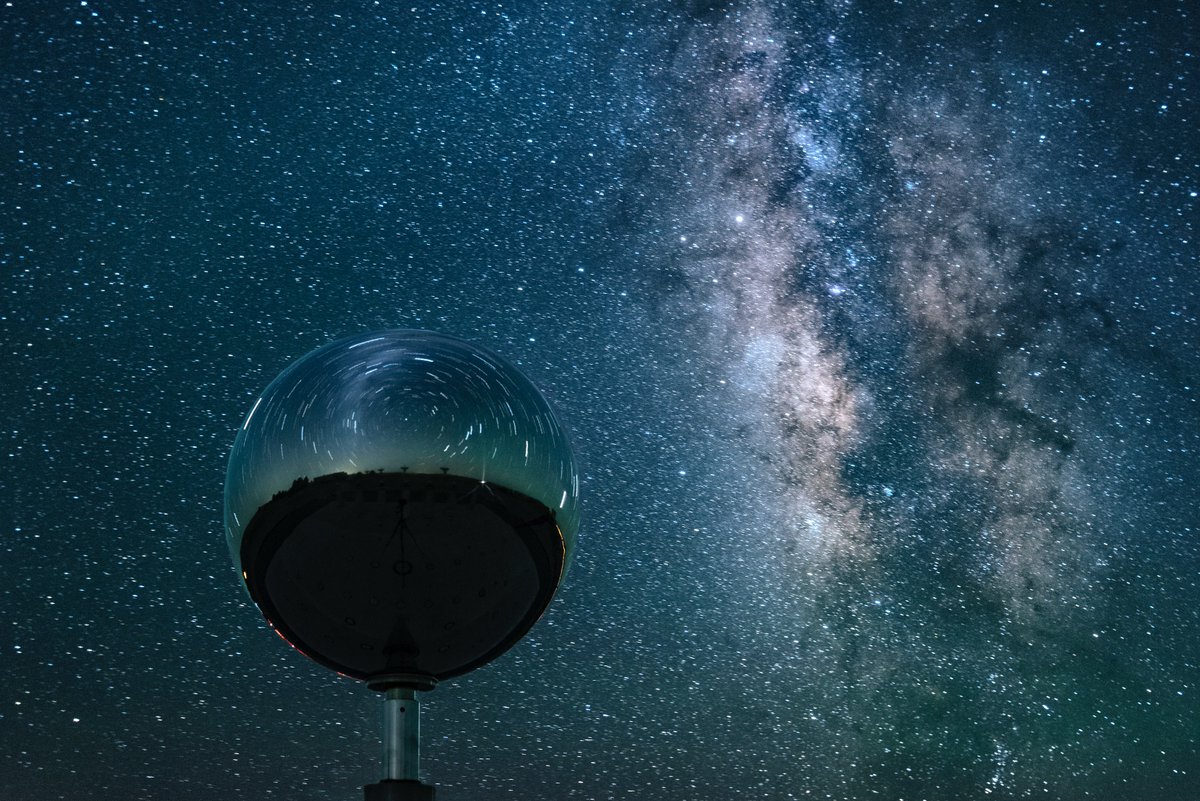 STARS EMIT LIGHT Stars, galaxies, even dust and complex sugar molecules give off signals (signals = light = radiation) that is of GREAT interest to Earth-bound (for now) astronomers and engineers.

STARLIGHT GETS FAINTER Travelling across the universe takes its toll on the signals, just a bit (sarcasm), and by the time the faint light sprinkles down on our planet the signals are so meager it takes a gargantuan effort – a VERY LARGE TELESCOPE – and the best cryogenic receivers cooled to ~ -450 degrees F to accurately pick them out of the technological noise blaring from our planet.

A LARGE ANTENNA or SET OF ANTENNAS COLLECT STARLIGHT The incredibly faint signals are collected with an array of giant radio antennas or sometimes one single, very-large dish. The collecting area of these antennas can range from 10 to 100 meter in diameter. The larger the reflector ( a 100 m dish at 100 GHz can resolve a 6.2 arc-second feature. A 4cm object needs to be placed 1.333m = 4000 feet = 0.8 miles away to subtend this angle.) This is called the resolution of a telescope, or the ability to see small features, to resolve it from another object beside it.

The resolution can be further improved by using interferometers; an array of multiple antennas separated by large distances, their signals are digitally combined to synthesize a telescope as large as the furthest distance between the antennas. For example, the Event Horizon Telescope linked eight radio observatories from across the globe —basically, synthesizing an Earth-sized telescope — to be able to see the small details of the black hole at the center of M87, a galaxy far beyond the Milky Way, past our neighbours, beyond the Local Group and in the Virgo Cluster.

Remember the golf ball a mile away? With an earth-size interferometer, observing at a wavelength of 1.3 millimeters, the golf ball would need to be placed on the Moon to simulate the smallest object this interferometer could see (an interferometer with telescopes separated by 12,000 km can resolve a 22 micro-arcsecond feature. So, a 4-centimeter object needs to be placed at the approximate distance from the Earth to Moon). Hence, the resolution of an interferometer depends not on the diameter of each individual radio telescope, but on the maximum separation between them. To put it another way: the angle astronomers can see is the ratio between the observing wavelength and the distance between telescopes.

COOLING THE RECEIVER Not only is the telescope able to see small features, but it is also extremely sensitive to faint signals. This is accomplished by using cryogenic receivers on the larger dishes, making the faint objects discernable. With a 100 meter telescope and a cryogenic receiver, the sensitivity of the telescope increases and we can detect extremely faint objects beyond our galaxy.

How does cooling a receiver to cryogenic* temperatures (16 K = -257 deg C = -431 deg F) just above absolute zero, increase the sensitivity of a radio telescope (i.e. allow astronomers to observe fainter and fainter signals)? All materials, due to their temperature and internally generated noise, contribute extra activity over and above the faint signals we are trying desperately to detect. By reducing the temperature, these internally generated noise levels can be reduced drastically, allowing fainter and fainter signals to be detected.

Building devices colder than anything else in the known universe requires special equipment. This cryogenic dewar at NRAO’s Central Development Lab can cool components to almost absolute zero. Some of the new components we are researching require this temperature to function.  Left: Specialized refrigerators and heavy copper braids transfer the heat away from the plates which cool them. Right (from top to bottom): each layer reduces the temperature incrementally until the smallest plate at the bottom reaches a temperature close to 0.1 K.

The cryogenic receiver is composed of a feedhorn that collects the light and transforms it into the antenna’s cooled receiver. Inside the receiver is a very low noise amplifier which takes the weak signal and amplifies it by a factor of 10,000, all the while adding as little noise as possible. The signal then travels outside the dewar and  from there  goes through many stages of filtering and further amplification before being detected and put onto fiber optic cable. Usually placed in a central control room, the fiber cables from a single-dish telescope (or all telescopes in the array) are combined to form an image that the astronomer can study.

*The cryogenic temperature range has been defined from −150 °C (−238 °F) to absolute zero (−273 °C or −460 °F), the temperature at which molecular motion comes as close as theoretically possible to ceasing completely. 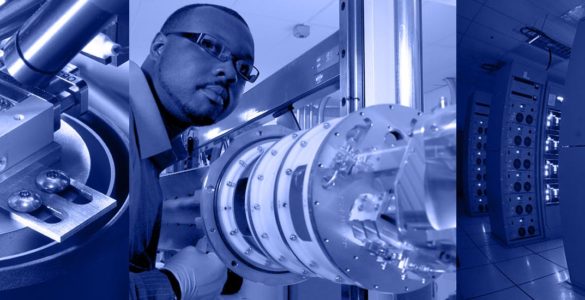 Radio Astronomy
The Technology of Radio Astronomy
How Do Radio Telescopes Work? Think of a radio telescope as a very specialized antenna outfitted with . In...