An imagined circle in the Earth’s atmosphere that is directly above its equator. 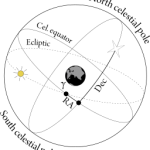 A non-existent sphere that surrounds Earth and is used to describe the position of objects in the sky.

A luminous star whose brightness varies periodically: growing very bright quickly, and then dimming slowly. It is possible to determine the true luminosity of a Cepheid Variable star by observing the period of these changes. The true luminosity can then be compared to how bright the star appears from Earth. This makes Cepheids useful for calculating approximate astronomical distances. 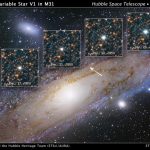 The part of the Sun’s atmosphere just above the surface. 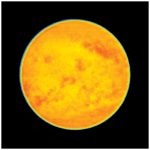 A star that never sets but always stays above the horizon. This depends on the location of the observer, and how far above or below (for North and South poles) the equator they are viewing from.

The amount of area a telescope has that is capable of collecting electromagnetic radiation. This is important for a telescope’s sensitivity because the more radiation it can collect (that is, the larger its collecting area), the more likely it is to detect dim objects.

A spectrum in which the energy of an object is emitted across all wavelengths.

A specialized supercomputer that multiplies the data from two antennas and averages the result over time. Essentially the correlator only selects the data that is spotted and analyzed by both antennas, which means the data that isn’t spotted by both is dropped. 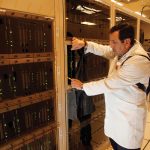 The mass ejected from the sun due to a solar flare. 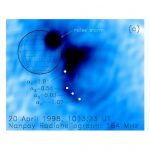 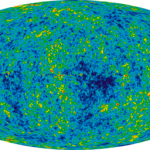 Cosmic rays are very high energy atomic nuclei (mostly protons) that travel through space at close to the speed of light and strike the Earth’s atmosphere. 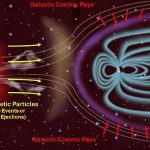 The study of the large-scale structure and evolution of the universe. 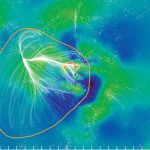 This is another word for the universe and derived from the Greek, meaning ‘everything’.

Electromagnetic radiation emitted when charged particles are moved within a magnetic field at non-relativistic speeds (i.e., not close to the speed of light).

The disk of dust, gas, or debris surrounding a star. 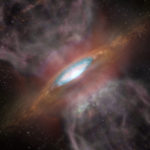