Electromagnetic radiation at wavelengths shorter than the violet end of visible light. The atmosphere of the Earth effectively blocks the transmission of most ultraviolet light, which can be deadly to many forms of life.

The inner part of the shadow cast by an illuminated object behind a non-illuminated celestial object. (Example: During a solar eclipse, the moon moves in front of the sun, causing the moon to cast a visible shadow.) 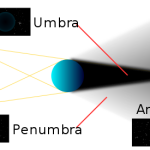 Similar to the cosmos, this term that refers to all of space and everything that is contained within it. 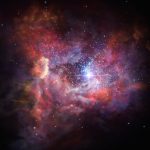