A unit of measurement that looks at the flux density of electromagnetic radiation. It is most often used when the object being observed can be considered a point source. This measurement was named after radio astronomy pioneer Karl G. Jansky.

Jets can also come from a protostar. (See protostar) 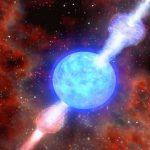 An American physicist and radio engineer who is known as one of the founders of radio astronomy. He was the first astronomer to discover radio waves emitting from the Milky Way Galaxy.