The two VLA transporters are special-purpose vehicles designed specifically to pick up and carry the VLA’s 230-ton dish antennas. The transporters run on two parallel sets of U.S. gauge railroad tracks — four rails in total. Weighing 90 tons themselves, the transporters are powered by 380- and 400-horsepower (respectively) diesel engines that in turn power a hydraulic system. That system drives the wheels using radial hydraulic motors and also powers the jacks that lift the antennas off their concrete-pier mountings. The wheels are mounted on assemblies at each corner of the vehicle that can rotate to allow “turning” the 90-degree rail intersections that connect each antenna mounting station with the main rail line for each arm of the VLA’s “Y” layout. 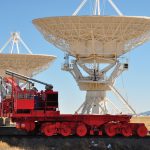 Young stars surrounded by gas and dust; believed to be contracting to main sequence stars. 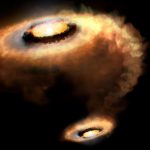 Radiation emitted due to an object’s temperature or ionized gas

When a star being destroyed by a supermassive black hole is pulled apart and emits powerful jets of material along with light. 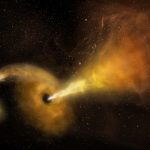 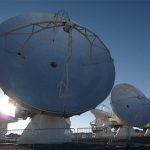 The donut-shaped feature of dust and gas that surrounds some supermassive black holes. 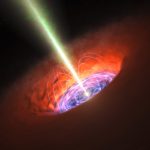